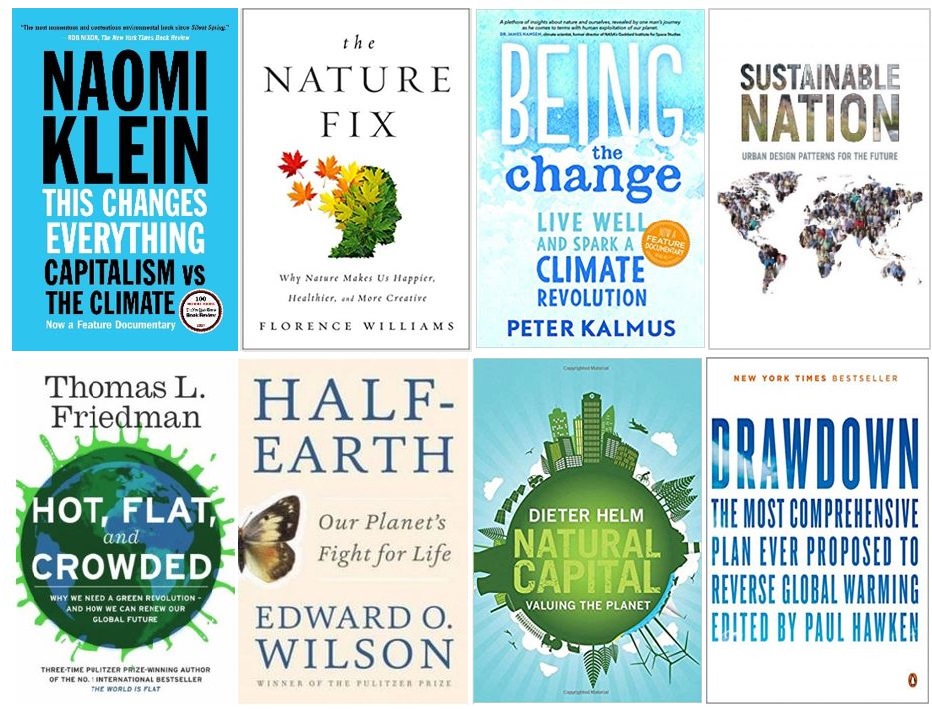 The story of 2018 was climate change. The increasingly severe effects of the rise in global temperatures are being felt everywhere, from extreme weather events to natural disasters. Scientific studies warn of the imminent and catastrophic consequences of climate change, raising global awareness of the impending crisis. As we move into 2019, here is our selection of eight must-read books on climate change and sustainability to enlighten and inspire you this year.

Being the Change: Live Well and Start a Climate Revolution by Peter Kalmus

Alarmed by drastic changes occurring in the Earth’s environment, climate scientist and suburban father Peter Kalmus embarked on a journey to change his life and the world. He began by ditching the car and bicycling instead, growing his own food and making other simple, fulfilling changes. Kalmus slashed his climate impact to one tenth of the US average and became happier in the process.

Being the Change (2017) inspires individuals who want take climate action, but are unsure of where to start.

This Changes Everything: Capitalism Vs The Climate by Naomi Klein

Rob Nixon from The New York Times called it “the most momentous and contentious environmental book since Silent Spring”. Hard-hitting journalist Naomi Klein uncovers the myths clouding the climate debate, unearthing how powerful and well-financed right wing think tanks and lobby groups are at the source of the climate change denial.

This Changes Everything (2014) challenges the current “free market” ideology, which Klein argues is unable to solve the climate change crisis.

The Nature Fix: Why Nature Makes Us Happier, Healthier and More Creative by Florence Williams

From eucalyptus groves in California, forest trails in Korea, to islands in Finland, Florence Williams investigates the science behind nature’s positive effects on the brain. Delving into cutting-edge research, The Nature Fix (2017) exposes the powers of the natural world to improve health, strengthen our relationships and promote reflection and innovation.

Drawdown: The Most Comprehensive Plan Ever Proposed to Reverse Global Warming by Paul Hawken

Drawdown (2017) gathers the 100 most effective solutions to halt global warming from leading scientists and policymakers, which if adopted, could even reduce the overall greenhouse gasses currently present in the atmosphere . Already firmly anchored in the New York Times bestseller list, Hawken ranks optimal solutions – like moderating the use of air-conditioners and refrigerators, or adopting a plant-rich diet – by the amount of potential greenhouse gases they can avoid or remove.

Half-Earth: Our Planet’s Fight for Life by Edward O. Wilson

Half Earth (2016), written by one of the world’s greatest naturalists and a double Pulitzer Prize winner, proposes an realistic plan to save our imperilled biosphere: devote half the surface of the Earth to nature. In order to stave off the mass extinction of species including our own, we must move swiftly to preserve the biodiversity of our planet, Wilson urges in his most impassioned book to date.

The first real attempt to calibrate, measure and value natural capital from an economic perspective, Natural Capital (2015) shifts the parameters of the current environmental debate. Dieter Helm, Fellow of Economics at the University of Oxford, claims that refusing to place an economic value on nature risks an environmental meltdown. He proceeds to outline a new framework to couple economic growth with respect for our natural endowment without sacrificing the former.

Hot, Flat and Crowded: Why We Need a Green Revolution – and How It Can Renew America by Thomas Friedman

Given the recent buzz about the Green New Deal in American politics, we recommend this brilliant book by Pulitzer Prize-winning author who coined the term, Thomas L. Friedman. Hot, Flat and Crowded (2008) speaks to America’s urgent need to expand national renewables and how climate change presents a unique opportunity for the US – not only to transform its economy, but to lead the world in innovating toward cleaner energy.

An essential resource for urban designers, planners and architects, Sustainable Nation (2018) is an urgent call to action and a guidebook for change. An architect and urban planner, Douglas Farr details how designing cities and buildings with sustainable criteria can mitigate the humanitarian, population and climate crises.

These are just some of Earth.Org’s must-read books on climate change. As the issue of rising global temperatures imperils humanity further, it is crucial to consult a variety of impartial sources to get the most accurate information on the state of the planet.