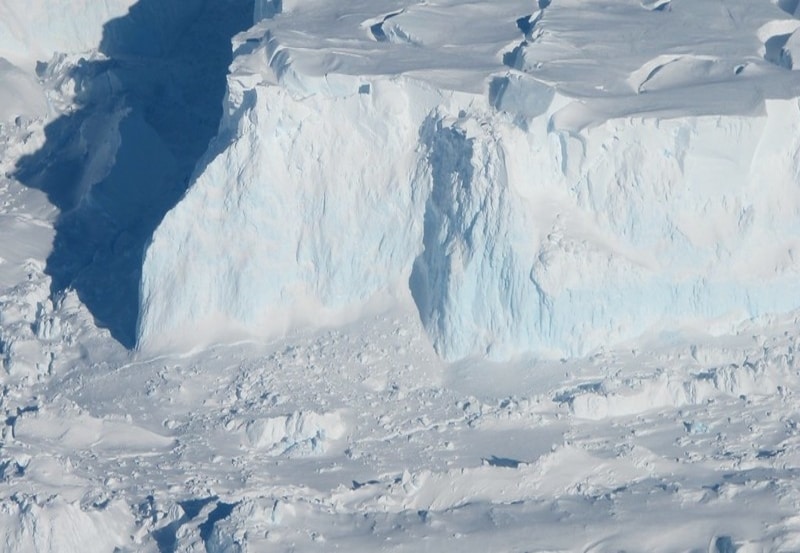 Scientists have issued new warnings over the Thwaites Glacier, an unusually large and vast ice sheet in Antarctica, that is melting swiftly and whose collapse could lead to rapid sea level rise. Already, ice draining from the glacier into the Amundsen Sea accounts for about 4% of global sea level rise, prompting concerns over the cascading effects the collapse of this glacier would have on the rest of the world.

Termed the ‘Doomsday Glacier’, Thwaites provides important insight into Earth’s future. It is now the focal point of a major research project led by British and American scientists which aims to understand how the glacier is changing, and what these changes mean for rising sea levels. Teams of scientists are drilling into the Thwaites Glacier to determine whether it is about to collapse.

Thwaites’ ice shelf destabilises the whole glacier, and research has shown that there is very little ice shelf left in the western part of the glacier. Instead, much of the ice that is there is a slushy mix of icebergs and other bits of floating ice.

If the whole of the floating ice shelf breaks into icebergs, what will be left is a cliff of ice whose shape makes it especially vulnerable to runaway collapse. The seafloor underneath the glacier slopes downward as it goes inland- called a “retrograde slope”- and the ice sitting on top of it gets thicker. If the Thwaites glacier retreats far enough inland and reaches a certain thickness, it will start to collapse under its own weight. Once this starts, ice cliff modelling suggests, there may not be anything to stop it.

Thwaites Glacier is losing ice faster and faster, and the process seems to be accelerating; over the past three decades, the amount of ice flowing out of Thwaites and its neighbouring glaciers has nearly doubled.

The glacier is more than 191 000 sq km and is particularly susceptible to the climate crisis. Rob Larter, marine geophysicist and UK principal investigator for the Thwaites Glacier Project at the British Antarctic Survey, said “it is the most vulnerable place in Antarctica,” with large portions deteriorating and breaking off.

David Vaughan, director of science at the British Antarctic Survey, stressed that if the Thwaites glacier continues to deteriorate at its current rate, it could collapse and be responsible for tens of centimetres of sea level rise by the end of the century. “That doesn’t sound like much, but it is,” Vaughan noted, “it is not about the sea coming up the beach slowly over 100 years – it is about one morning you wake up, and an area that has never been flooded in history is flooded.”

As Thwaites melts, it could propagate a 65 centimetre rise in sea levels, however if Thwaites fully deteriorates, the cascading effect across the Western half of Antarctica would lead to a 2- to 3-meter rise in sea levels, which would be ‘catastrophic’ for most coastal cities.

Paul Cutler, programme director for Antarctic glaciology at the National Science Foundation in the US, explains how Thwaites glacier “is a keystone for the other glaciers around it in West Antarctica … If you remove it, other ice will potentially start draining into the ocean too.”

Current models estimate a 61- to 110-centimetre sea level rise by the end of the century, assuming the world continues to emit the same amount of carbon dioxide into the atmosphere.

The Cascading Effects of Melting Ice

Antarctica holds around 90% of the ice on the planet- the ‘equivalent to a continent the size of Europe covered in a blanket of ice 2 kilometres thick’. As temperatures rise, the Earth does not heat up evenly everywhere: the polar regions warm much faster. Antarctica and Greenland are at the frontline of receiving much of global warming’s negative effects, more so than the rest of the world. Unfortunately, these high temperatures are being fuelled not just by a rise in greenhouse gases, but also by natural weather shifts in the tropics.

A recent study found that the South Pole, the most remote place on Earth, has warmed at three times the global rate since 1989, with temperatures rising 0.6 degrees per decade- a worrying figure that reveals the stark and rapid progression of global warming.

Currently, the Antarctic continent contributes about 1 millimetre per year to sea level rise, which is a third of the annual global increase.

There is a lot yet to understand about the physical properties of ice sheets and how they deteriorate with time- researching the Thwaites glacier is therefore pivotal. Anders Levermann, a professor at the Potsdam Institute for Climate Impact, says, “it is very difficult to say how fast sea level is rising, but it is not very difficult to say how much ice can survive on a planet that is 1C or 2C or 3C warmer, and how much the ocean will expand.”

Despite reports demonstrating a decrease in carbon dioxide emissions amidst COVID-19 due to worldwide lockdowns, the long-term projection remains unsettling as carbon dioxide can remain in the atmosphere for long periods of time, and its levels are still increasing.

Additionally, the Earth’s core temperature is continuing to rise: last month was the hottest June on record, and in July a heatwave swept the Russian Arctic near Siberia resulting in temperatures of 38 degrees Celsius, which triggered the escalation of the Arctic wildfires.

Many of the observable effects of the climate crisis are irreversible, and continuous research is needed to understand what the future of rising sea levels holds and what it would mean for Earth’s inhabitants. Reversing these effects entirely is out of the question, scientists protest, but stopping them in their tracks by slowing the rate of global warming would help prevent further damage.

The challenge lies in tackling the rapid rate of rising sea levels. If infrastructure planners prepare for a 60 or 70 centimeter rise in sea level, then an unprecedented rate of, say, twice as much, would diminish their efforts- making such plans ineffective in accommodating for a potential higher, unpredicted sea level rise. In light of this, research that aims to develop a greater understanding of Thwaites will help experts better plan and prepare for the future of Earth’s climate.

With higher sea levels comes coastal flooding, damaged infrastructure, heightened storms during typhoons, and destruction to agricultural land due to salty seawater invasion. Coastal cities have already begun preparing for the worst. San Francisco is building defences around its airport, which sits three metres above sea level, and London is considering increasing the height of the Thames barrier.

According to a study published in the journal Environmental Research Communications, the economic cost of such infrastructure aimed at accommodating rising seas will be as much as 4% of global GDP by the end of the century.

Thomas Schinko, author of a study published in Nature Climate Change and a researcher at the International Institute for Applied Systems Analysis, says that if we don’t adapt we will experience ‘huge losses’, stressing that it would be more cost-effective to prepare for the worst than to deal with the aftermath of rising sea levels.