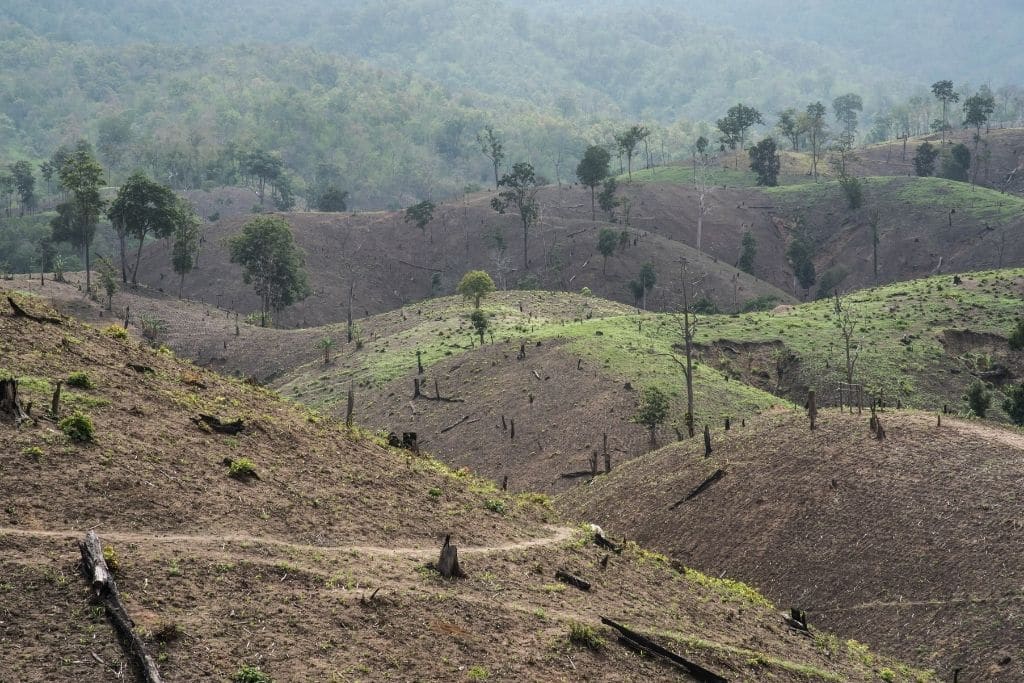 Deforestation for agricultural farming, logging and other commercial purposes is causing the loss of millions of hectares of forest land every year, much of which has become too degraded to regrow and recover. The world’s forests have the ability to capture and store carbon dioxide from the atmosphere, which makes them crucial in the fight against the climate crisis. But we continue to destroy more forest every single day due ever-increasing global demands and urban development. The Amazon rainforest, the largest and most biodiverse forest on the planet, has recently experienced a 15-year record high levels of deforestation. Despite more than 140 countries having pledged to halt and reverse deforestation, there’s much more that needs to be done.  Here are 13 powerful quotes about deforestation and why we need to protect our forests more than ever.

1. “It’s well-known that the trick to reducing net carbon emissions relies on not emitting so much of the stuff and finding a way to get it back where it belongs.” – Max Ajl, an associated researcher with the Tunisian Observatory for Food Sovereignty and the Environment.

2. Humanity is cutting down its forests, apparently oblivious to the fact that we may not live without them.” – Issac Asimov, late American writer and former professor of biochemistry at Boston University.

3. “Worldwide, we have now destroyed over half of the forest that once flourished on our planet. Not only are we losing the animals that once lived on them, we’re also changing the climate of the entire globe.” – David Attenborough, renowned British naturalist and broadcaster.

“Deforestation is changing our climate, harming people and the natural world. We must, and can reverse this trend.” – Jane Goodall, renowned English primatologist and anthropologist.

5. “The silencing of the rainforests is a double deforestation, not only of trees but a deforestation of the mind’s music, medicine and knowledge.” – Jay Griffiths, British writer and author of Wild: An Elemental Journey.

6. “Most floods are caused by man, not weather; deforestation, levee construction, erosion, and overgrazing all result in the loss of ecosystem services.” – Paul Hawken, American environmentalist, entrepreneur, author, economist, and activist.

7. “We have to stop the devastating loss of our forests…end the role of humanity as nature’s conqueror, and instead become nature’s custodian.”- Boris Johnson, British Prime Minister following the COP26 deforestation pledge.

8. “If we tackle deforestation in the right way, the benefits will be far-reaching – greater food security, improved livelihoods for millions of small farmers, and indigenous people, more prosperous rural economies, and above all, a more stable climate.” – Paul Polman, founder of Imagine, a foundation and corporation that  aims to help companies meet UN global goals for sustainable development.

9. “The commitment to put an end to illegal deforestation and develop sustainable alternatives for commodities like palm oil and soy, for example, is an inspiring illustration of what can be achieved when governments and industry partners come together determined to bring about transformational market-wide changes.”- Paul Polman.

“Forests are the world’s air-conditioning system – the lungs of the planet – and we are on the verge of switching it off.” – Charles, the Prince of Wales.

11. “The answer is simple. If we lose the world’s forests, we lose the fight against climate change. Rainforests are our Earth’s greatest utility – our planet’s lungs, thermostat and air-conditioning system.” – Michael Somare, former Prime Minister of Papua New Guinea and ‘father of the nation’.

“Destroying rainforest for economic gain is like burning a Renaissance painting to cook a meal.” – E.O. Wilson, influential American biologist, naturalist, and writer.

13. “If we want to use forests as a weapon in the fight against climate change, then we must allow them to grow old, which is exactly what large conservation groups are asking us to do.” – Peter Wohlleben, renowned German forest scientist.