Corals are well-known for their captivating colours due to microscopic algae inhabitants. However, some have been seen glowing, which is unusual. Researchers have sought to understand the reason behind this glowing in a new study, which has found that it plays a significant role in maintaining the symbiotic relationship between corals and its zooxanthellae. How do these fluorescent pigments help corals to adapt to climate change?

In surface water, sunlight is a key driver for the photosynthetic primary production, where zooxanthellae undergo photosynthesis. Yet, high energy wavelengths such as UV rays may cause photoinhibition and photodamage to the algae. Previous studies have found that corals possess types of protein with fluorescent pigments to counteract the environmental stress induced by sunlight by absorbing or diverging the damaging wavelengths and converting them into lower-energy light such as visible and infra-red light. A similar mechanism can also be found in terrestrial plants such as blueberries, which contains a pigment called anthocyanins, to reduce light stress when exposed to sunlight.

Why are Corals Glowing in the Deep Sea?

Apart from the surface water, corals also display psychedelic colours in the deep-sea region, where there is little or no sunlight. A recent study found evidence that corals use fluorescence to increase its survival in the deep-sea environment, which serve a different purpose than that of corals living in shallow water.

Given that the deep sea environment is dominated by blue light, deep-sea corals are equipped with a specific protein, known as photoconvertible red fluorescent protein, which converts the blue light into longer wavelength (i.e. orange-red light). Orange-red wavelengths help enhance light penetration and reflection, and allow even distribution of light within the coral tissue and its skeleton, thus increasing the productivity of zooxanthellae living in deeper coral tissue.

The glowing colour may also appear in cases where coral bleaching occurs. Given that coral symbionts are sensitive to heat and light stress, corals who suffer from these stressors would result in symbiont expulsion. Experimental studies demonstrated that corals have developed a self-regulating mechanism, known as an optical feedback loop, which is triggered by the increased internal backscattering light from the coral skeleton due to reducing symbiont density in coral tissue. Corals can enhance photoprotection through increasing internal light absorption by protein pigments to lower the light stress, which in turn helps facilitate the recolonisation of symbionts on bleached coral tissue.

Scientists have just provided a new explanation as to why corals are being seen glowing in deep-sea environments, showing that it does so to adapt to environmental stresses. The study also emphasises how little we know about coral reefs and marine ecosystems. Coral reefs have long been known to be the most productive and biodiverse ecosystem on Earth and have recently been found to be a new reservoir for medicine discovery in recent years.

In view of the increasing rate of coral bleaching due to the climate crisis, effective actions will need to be taken collaboratively by government and international organisations to prevent further degradation of environmental quality.

A team of marine scientists and architects in Hong Kong has created the first 3D-printed terracotta ‘reef tiles’ to help restore eroding local corals. In July, the first clay coral tiles were placed on the seafloor at Hoi Ha Wan Marine Park in Sai Kung as part of a week-long endeavour. Could this be the future of coral restoration and conservation?

Marine scientists from the Swire Institute of Marine Science (SWIMS) have been collaborating with architects from Hong Kong University (HKU) to construct the world’s first terracotta coral tiles in the hopes of conserving marine habitats.

Built at HKU’s Faculty of Architecture, the Reformative Coral Habitats Project has been printing clay hexagonal tiles mimicking the natural shape of brain coral since 2016. The 3D-printed tiles placed on the Hong Kong corals limits negative impacts on the ocean’s biodiversity and prevents potential interference with natural coral’s growth patterns. Vriko Yu, a student involved in the project, said the coral tiles act as a ‘substrate that can facilitate coral restoration, while conserving the local biodiversity’.

The project will see the installation of 128 reef tiles, covering approximately 40 square meters of seafloor in total, at three sites within the marine park. One of the three sites was so badly damaged that its coral communities had deteriorated into sand.

“Our hope is that our planted corals can become big enough to stabilise themselves and form a natural habitat,” Yu says. 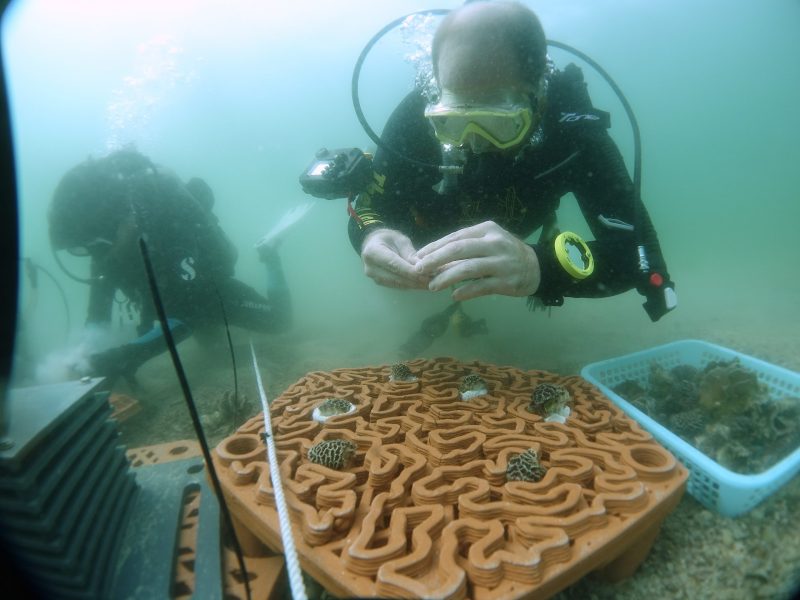 Weighing around 20 kilograms and measuring 65 centimeters in diameter, each tile consists of three parts: the legs, nine-grid layers and six coral-like layers. Together, the tile units act as an anchoring bed for corals to attach to and grow. Lidia Ratoi, assistant lecturer at HKU, says, “the tiles aren’t conventional tiles. Hong Kong’s subtropical climate entails much underwater sedimentation. That’s why our tiles have a lot of perforations so that sediment doesn’t deposit on the surface and suffocate the corals.”

The team hopes that once the environmentally-friendly terracotta tiles have helped to regenerate coral communities, they will erode and disappear into the seafloor. The 3D printed corals have also been carefully designed to withstand the unique water conditions in Hong Kong- marked by water pollution, overfishing, bioerosion and excessive sedimentation- which precipitated the collapse of local marine ecosystems, including corals.

Hong Kong waters are one of the harshest environments for coral to thrive in; those that are able to grow and flourish in such environments are referred to as ‘super-coral’. “Hong Kong is not an easy place for corals … The water quality has improved a lot over the last decade which has given us one important condition to keep the corals healthy. However, there are some external factors like red tides and typhoons which could take away our efforts in a blink of an eye,” Yu told Hong Kong Free Press.

In addition to restoring marine life and providing habitats for small fish, coral reefs protect coastlines from storms and erosion, provide jobs for local communities, offer opportunities for recreation and are a source of food and new medicines.

As the project develops, the team will monitor the sites quarterly, collecting data on the amount of corals that attach to the tiles and the biodiversity levels within the developing reefs. Though still in its early stages, the project’s success thus far is a positive advancement towards marine preservation and conservation in Hong Kong. Yu hopes that the project will encourage and inspire other cities to preserve and restore their local reefs: “If we can do it in Hong Kong, we believe other metropolises can do it, too.”

The marine team estimates that the effort will generate a total area of restored coral habitat of about 40 square metres. “This is quite small compared to the total area of coral communities in Hong Kong,” said David Baker, director of SWIMS and associate professor. “However, even small patches of corals can enhance local biodiversity by creating a home for other species, and small patches can be very important in the long-term by generating propagules – baby corals that can settle on nearby areas, thus spreading corals naturally in our area.”

Scientists have found that coral reefs in the Gulf of Aqaba at the northern tip of the Red Sea are capable of withstanding temperature increases of up to seven degrees Celsius, providing an opportunity to replicate these heat-resistant corals in other parts of the world to prevent reefs from dying off amid increasing temperatures and consequent bleaching events.

In the study conducted at the University of Eilat, the coral taken from the Gulf was able to withstand temperature increases of up to seven degrees Celsius. In fact, Maoz Fine, who led the research, says that these heat-resistant corals showed improved physiological performance at higher temperatures.

Despite ocean-surface temperatures in the area warming at the same rate as elsewhere, coral species there have never suffered a documented bleaching event, showing that a large range of corals along the 4 000km Red Sea reef are uniquely resistant to the climate crisis.

Coral reefs around the world are regularly undergoing mass bleaching events as a result of excessively high ocean surface temperatures along with acidification. The Great Barrier Reef, for example, has suffered three mass bleaching events in five years. Half of the world’s coral reefs are thought to have died in the past three decades, and up to 90% of existing coral reefs may die off by 2050.  This new discovery has confounded scientists.

Anders Meibom, a researcher with the Institute of Earth Sciences at the University of Lausanne, says, “This is the only coral reef ecosystem that has a change to withstand the two- to- three degrees of extra heat that we’ll now unavoidably have by the end of the century.”

The implications for coral reefs elsewhere in the world are still being studied. As direct transplants of coral species to other reefs may lead to failure, figuring out how the Red Sea heat-resistant corals survive the extreme conditions then steering the evolution of species could be another possibility.

Issues arise however, since scientifically assisted evolution takes time and the research into the Red Sea corals is still in its early stages. “We don’t really know what is going on biologically that allows these corals to thrive with temperature disruptions that are killing coral in other places,” says Karine Kleinhaus, a professor of marine science at Stony Brook University in New York.

The Red Sea feeds into the Indian Ocean through a strait between Djibouti and Yemen. More than 2.5 million years ago, the strait receded, cutting off the Red Sea and rendering it inhospitable. Kleinhaus says that it got ‘hot and super salty, and just about everything died’. When the ice caps melted, the strait reappeared and plant and animal life came back. The coral species that made the journey north through the Red Sea underwent generations of evolutionary selection. “Only those who could withstand the very high salinity and temperatures could move north and colonise,” Kleinhaus says.

Scientists believe that many of the coral species that inhabit the Red Sea today were forged by that migration and can survive- and even flourish- in ocean temperatures hotter than those forecast.

The Gulf of Aqaba’s coastline is divided among four countries: Egypt, Israel, Jordan and Saudi Arabia.  It will be a challenge to get these four governments- not all of whom recognise each other’s existence- to work together.

The progress of research is further slowed by lack of funds and the travel bans from the coronavirus, as well as the regions’ tense politics. Gathering scientists across regions to form a research expedition has been hindered by Saudi Arabia’s reluctance to allow Israeli scientists in its territorial waters.

Threats to the reef such as pollution, sewage, and unsustainable development will certainly accumulate, threatening the Red Sea coral reef therefore, countries need to willingly coordinate methods to attract more funding and advocate to protect the ecosystem.

Olivier Küttel, from the Swiss Federal Institute of Technology in Lausanne, says, “No one country can protect it alone. Egypt can do well, but if Saudi Arabia, Israel or Jordan do poorly, they can very rapidly destroy the whole ecosystem.”

Jordan’s King Abdullah II is among those lobbying to have the reef recognised on UNESCO’s Marine World Heritage List, in the hopes that it will raise the status of the area, make it easier to attract funding for research and pressure governments to protect it.