Tropical rainforests have an outsized role in the world, with their significance marked by the World Rainforest Day. Of the Earth’s ecosystems, rainforests support the largest variety of plants and animal species, house the majority of indigenous groups still living in isolation from the rest of humanity, and power the mightiest rivers. Rainforests lock up vast amounts of carbon, moderate local temperature, and influence rainfall and weather patterns at regional and planetary scales.

Despite their importance however, deforestation in the world’s tropical forests has remained persistently high since the 1980s due to rising human demand for food, fibre, and fuel and the failure to recognize the value of forests as healthy and productive ecosystems. Since 2002, an average of 3.2 million hectares of primary tropical forests—the most biodiverse and carbon-dense type of forest—have been destroyed per year. An even larger area of secondary forest is cleared or degraded.

Below is a brief look at the state of the world’s largest remaining tropical rainforests.

Note: All figures below are based on 2020 data from the University of Maryland (UMD) and World Resources Institute (WRI) using a 30% canopy cover threshold. Tree cover loss does not account for regrowth, reforestation, or afforestation.

The Amazon River, which drains an area nearly the size of the forty-eight contiguous United States, is the world’s biggest river. It carries more than five times the volume of the Congo or twelve times that of the Mississippi. By one estimate, 70% of South America’s GDP is produced in areas that receive rainfall generated by the Amazon rainforest. This includes South America’s agricultural breadbasket and some of its largest cities.

Due to its size, the Amazon leads all tropical forest areas in terms of its annual area of forest loss. Between 2002 and 2019, more than 30 million hectares of primary forest was cleared in the region, or about half the world’s total tropical primary forest loss during that period.

The Amazon is thought to house more than half the world’s “uncontacted” tribes living in voluntary isolation from the rest of humanity. However the vast majority of indigenous peoples in the Amazon live in cities, towns, and villages. 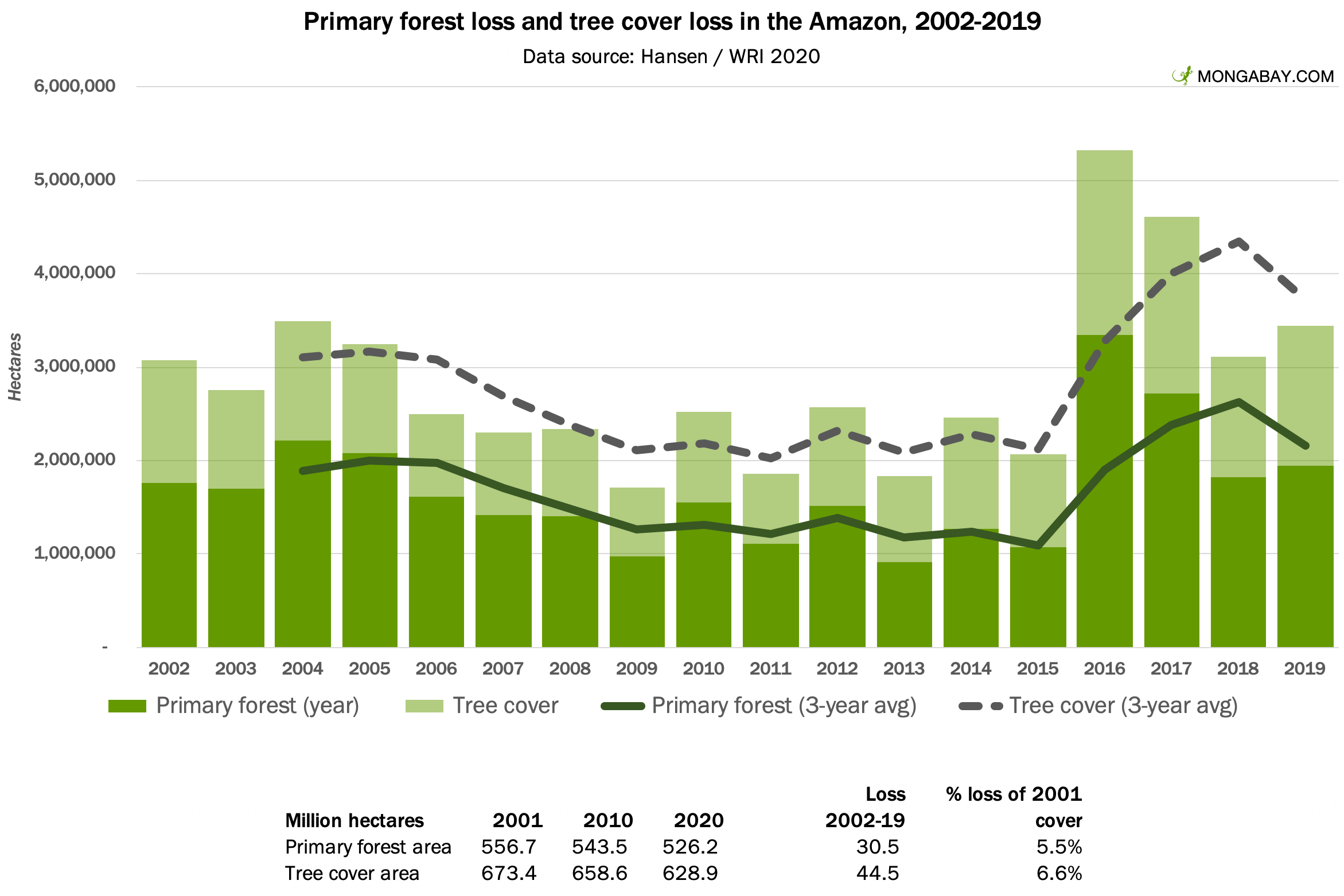 Until the early 2010s, deforestation in the Congo Basin was relatively low. War and chronic political instability, poor infrastructure, and lack of large-scale industrial agriculture help limit forest loss in the region. Most deforestation was driven by subsistence activities, though degradation due to logging was substantial. The situation is changing however: deforestation has been trending sharply upward in recent years. 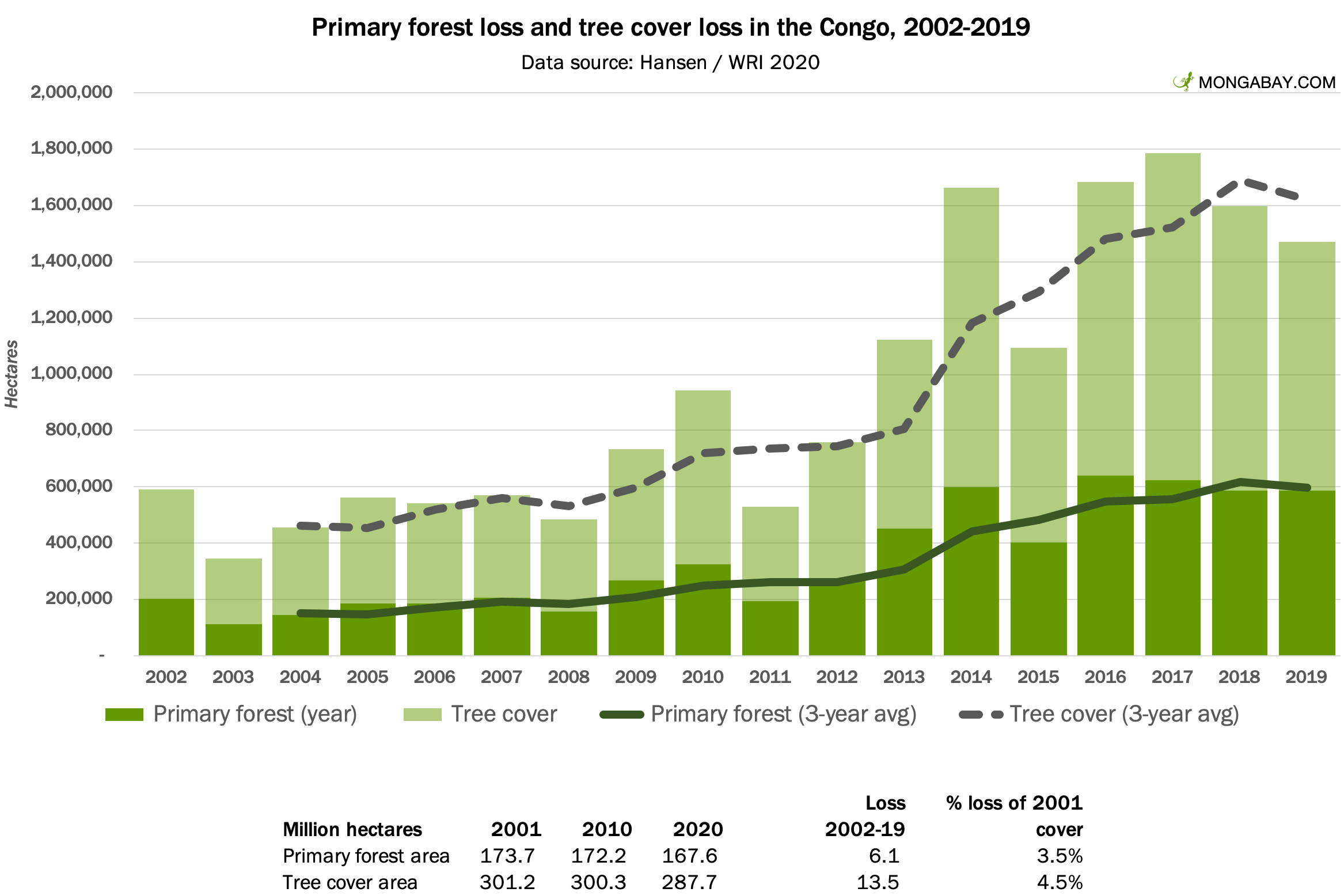 The Australiasian rainforest includes tropical forests on the island of New Guinea and northeastern Australia as well as scattered islands that were connected when sea levels dropped during that last ice age. As a consequence of this linkage, both land masses have common assemblages of plants and animals, while conspicuously lacking groups found on islands further west. For example, cats, monkeys, and civets are absent from New Guinea and Australia, but both have an unusually high diversity of marsupials like kangaroos, wallabies, cuscuses, and opossums.

Virtually all this region’s primary tropical rainforest is on the island of New Guinea, which is roughly split between Indonesia and Papua New Guinea.

New Guinea is the most linguistically diverse island on the planet with some 800 languages. There are believed to be a few uncontacted groups in remote parts of New Guinea.

Among major forest areas, Australiasia had the second lowest rate of primary forest loss since 2001, but deforestation is trending upward due to logging and conversion for plantations. 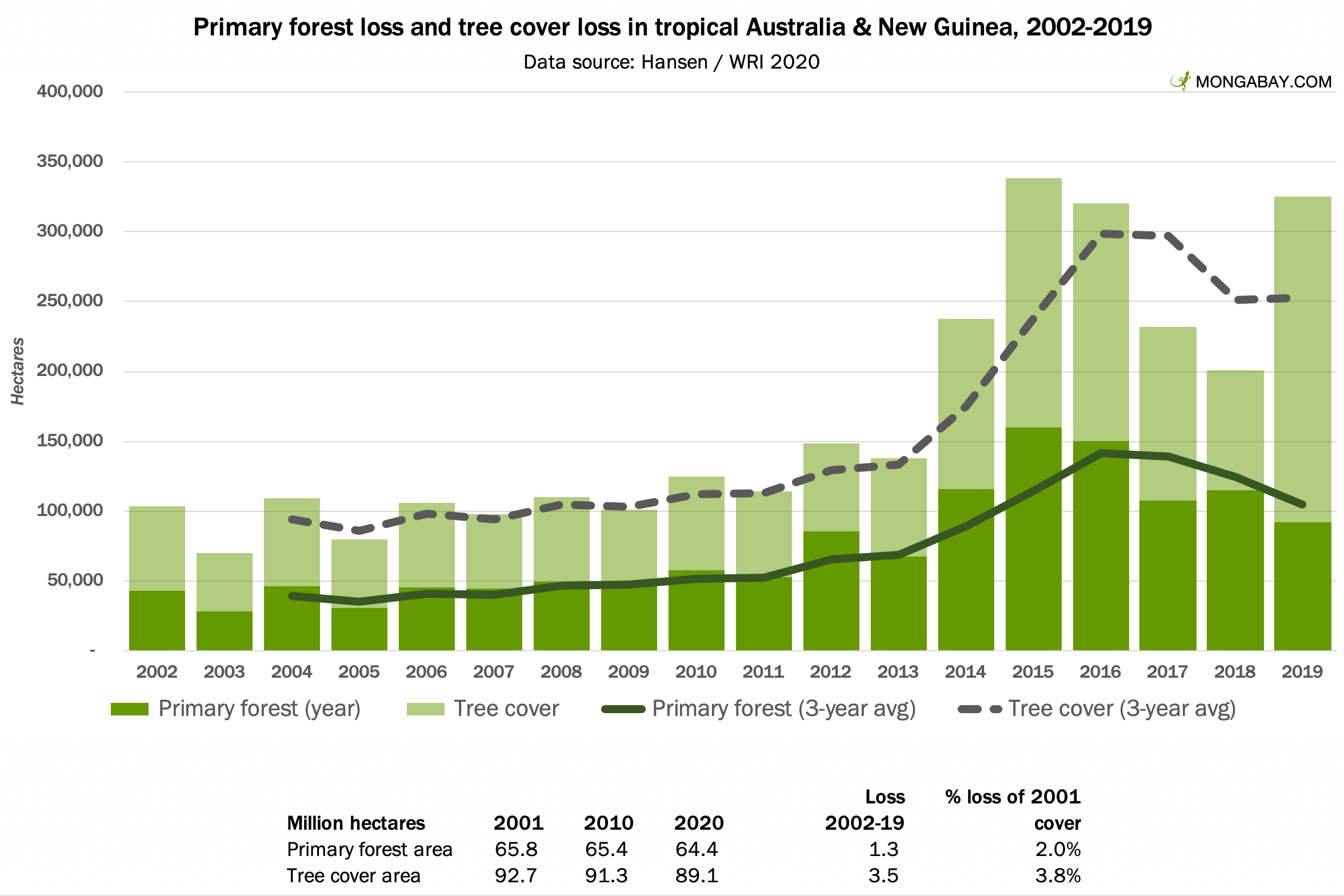 Major countries: Indonesian provinces of Papua and West Papua (51% of the region’s primary forest), Papua New Guinea (49%), and Australia (under 1%).

Deforestation trend: Deforestation is rising rapidly due to plantation agriculture, especially oil palm. The Indonesian part of New Guinea lost 605,000 hectares of primary forest since 2002 (1.8% of its 2001 cover), while PNG lost 732,000 hectares (2.2%). New Guinea is seen as the last frontier for large-scale agroindustrial expansion in Indonesia.

Sundaland includes the islands of Borneo, Sumatra, and Java, among others as well as Peninsular Malaysia. Most of the region’s remaining forest is on the island of Borneo, which is divided politically between Indonesia, Malaysia, and Brunei.

Sundaland lost the world’s largest share of primary forest cover between 2002 and 2019. Borneo lost 15% of such forests, while Sumatra lost 25%. Deforestation for oil palm and timber plantations, as well as fires set for land-clearing, are the biggest drivers of deforestation. However deforestation has been slowing since the mid-2010s. 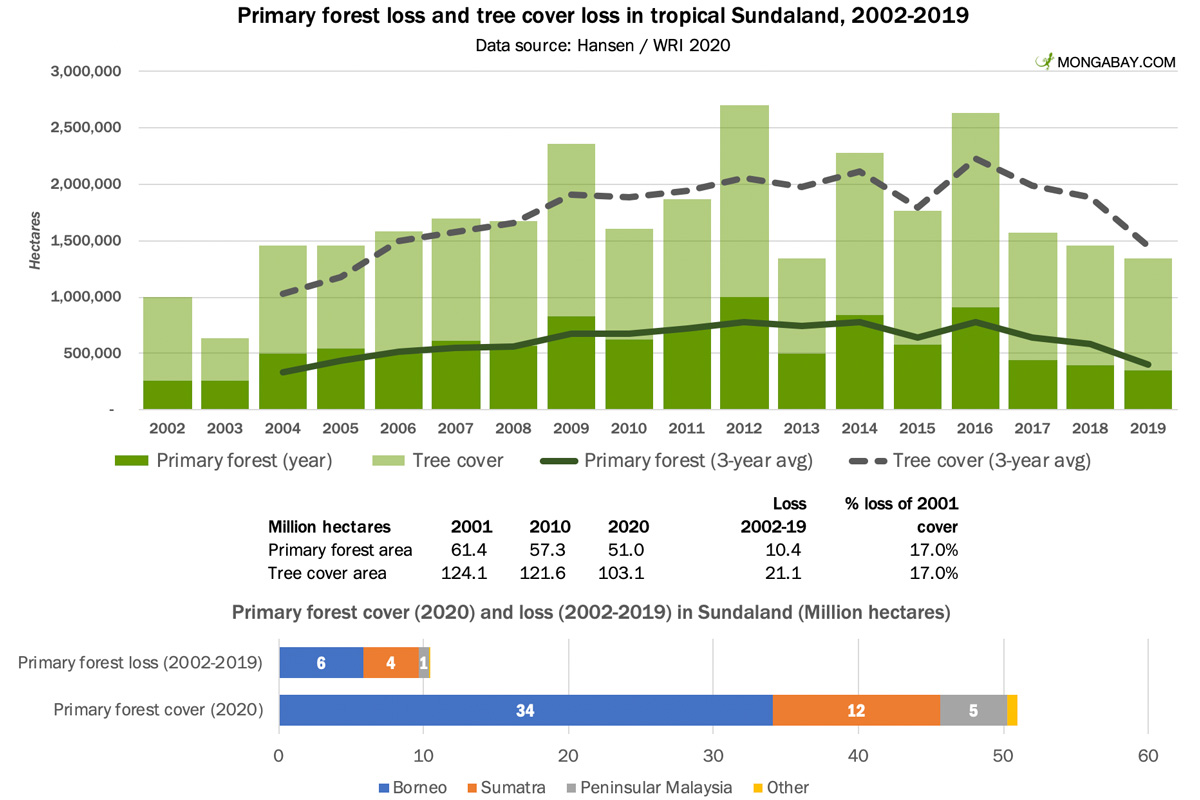 The Indo-Burma region includes a mix of tropical forest types, from mangroves to lowland rainforests to seasonal forests. Historical large-scale forest loss due to human population pressure means that surviving forests in this region are more fragmented than other regions mentioned so far. Most of the region’s tree cover consists of plantations, crops, and secondary forests.

The largest extent of primary forests in this region are in Myanmar, which has about one-third of the total area.

Indo-Burma lost about 8% of its primary forests and 12% of its tree cover since 2001. Cambodia accounted for more than a third of the region’s primary forest loss during this period. 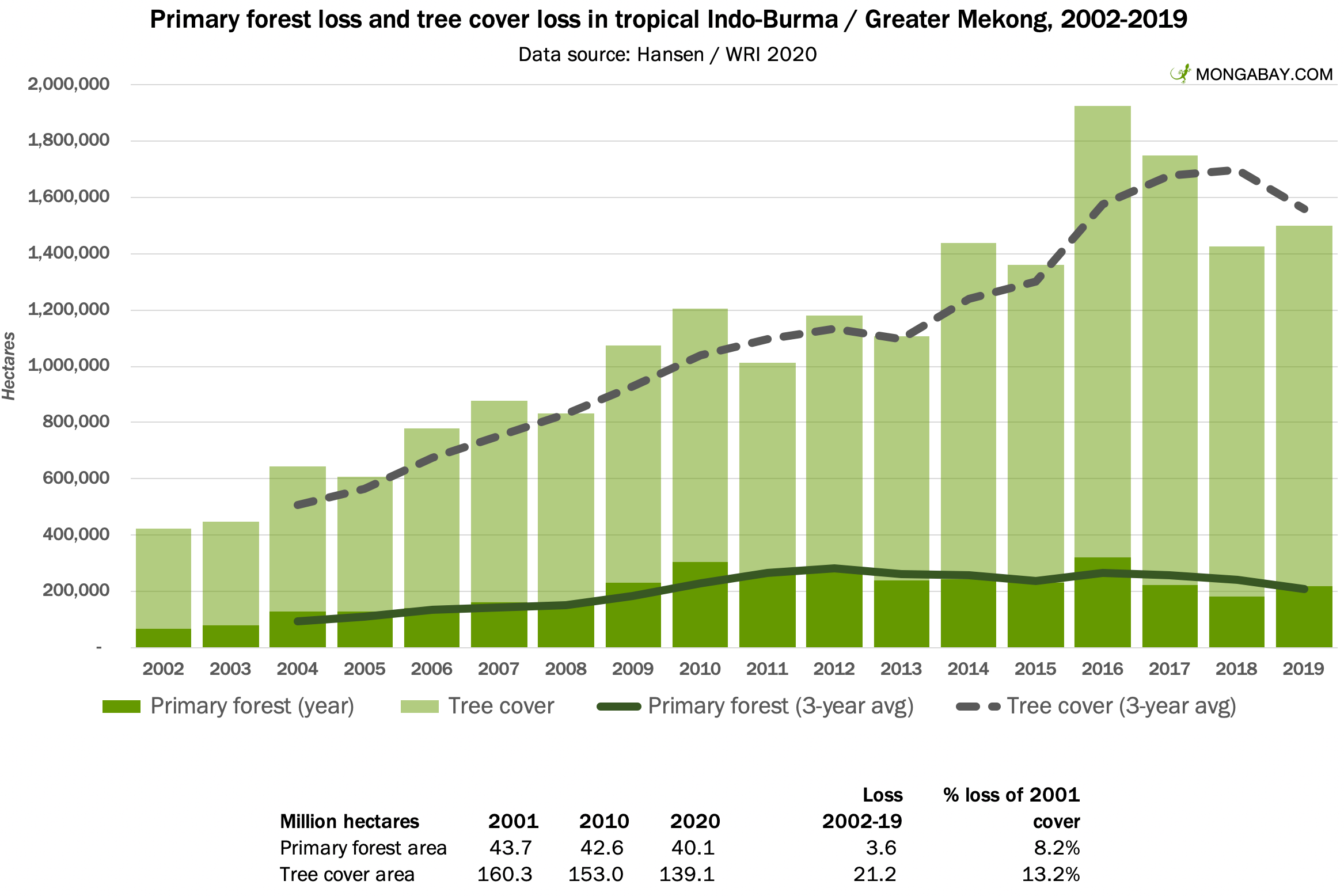 Mesoamerican rainforests extend from southern Mexico to southern Panama. Costa Rica’s rainforests are arguably the best known in the region thanks to its world-famous ecotourism industry, but the country ranks fifth in terms of primary forest cover. 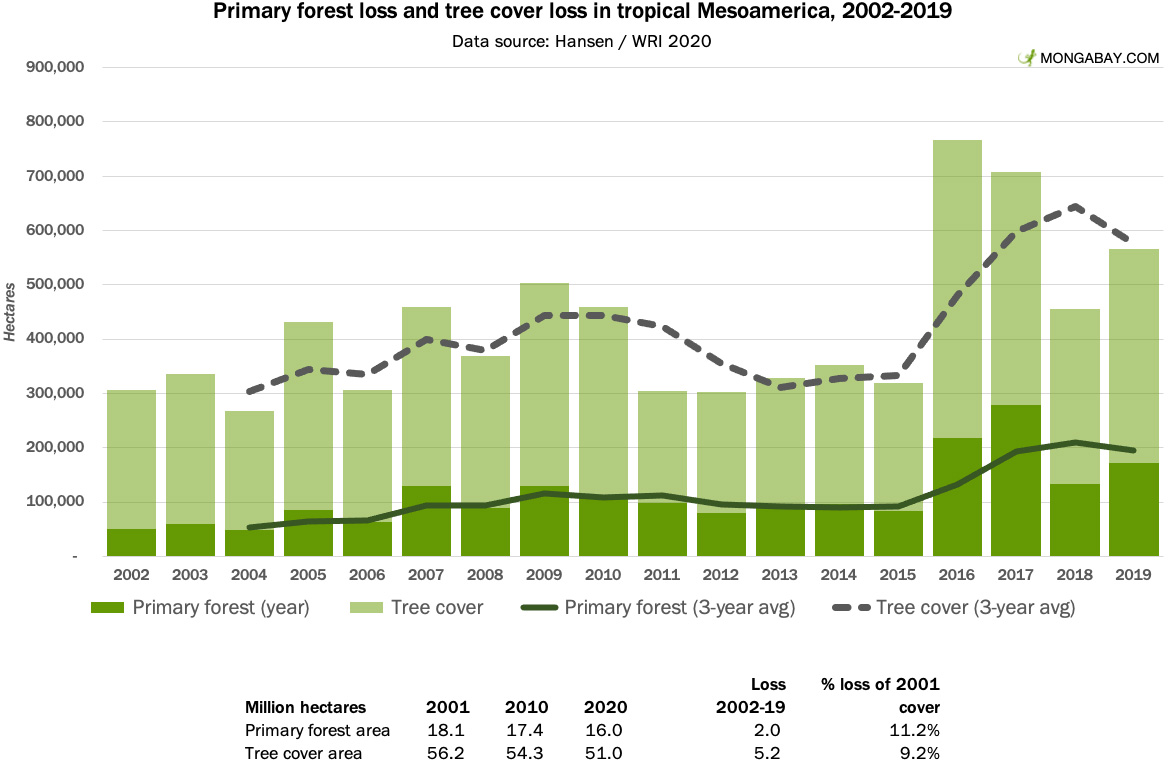 Deforestation trend: The rate of primary forest loss and tree cover loss accelerated toward the end of the 2010s driven by increasing incidence of fire, coupled with conversion of forests for cattle pasture, plantations, and smallholder agriculture. Mexico (534,000 hectares of primary forest loss), Guatemala (480,000), and Nicaragua (460,000) lost the greatest area of primary forest between 2002 and 2019. Costa Rica lost less than 2% of its primary forest during the period. In contrast, Nicaragua lost nearly 30%.

Wallacea represents a biogeographic oddity. When sea levels fell during the last ice age, islands to the west of this area joined continental Asia, while islands to the east got connected to land mass formed from Australia and New Guinea. As a result, Wallacea today has an unusual mix of species, drawing plant and animal groups from both regions, but also having high levels of endemism. 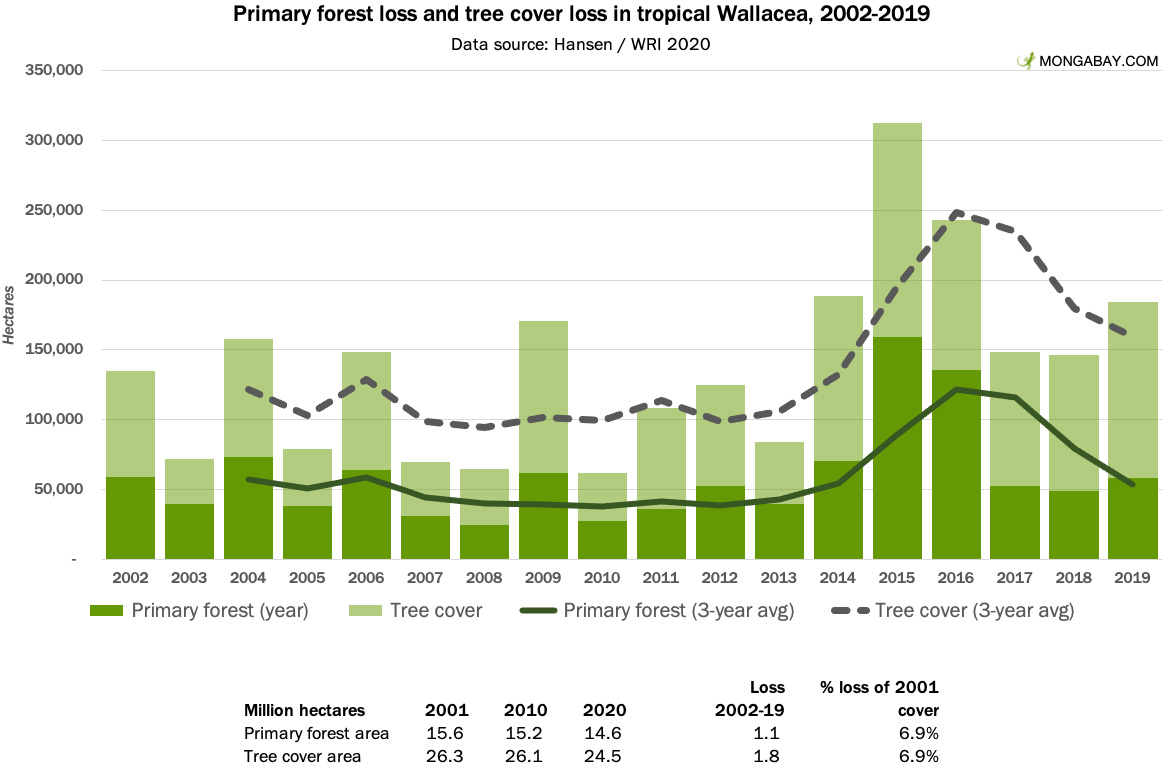 Major countries: Indonesia. More than 60% of Wallacea’s primary forest cover is on the island of Sulawesi. The Maluku islands account for 34%.

Deforestation trend: The rate of primary forest loss and tree cover loss jumped in 2015 and 2016 following a particularly bad fire season. Deforestation for industrial plantations, including oil palm and coconut, increased in the 2010s.

The Guinean Forests of West Africa consists of the lowland tropical forests that extend from Liberia and Sierra Leone to the Nigeria-Cameroon border. These forests have been greatly diminished by agriculture, including subsistence farming by small-holders and commercial cacao, timber, and oil palm plantations. 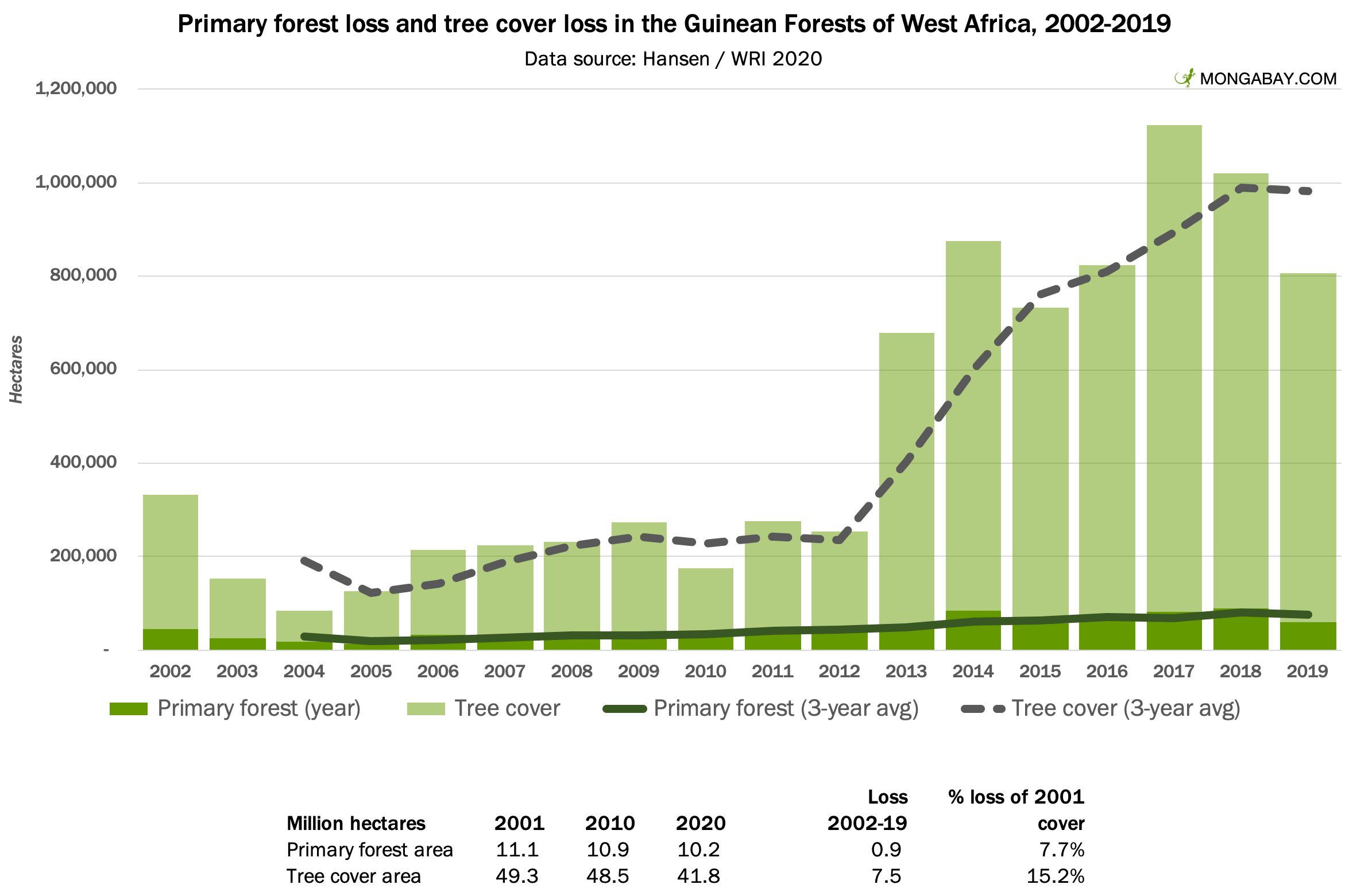 The Atlantic Forest once extended from northeastern Brazil into the hinterlands of Argentina and Paraguay. Today it has been greatly reduced by agriculture and urbanization. Most of the tree cover in this region is crops, plantations, or secondary forests. 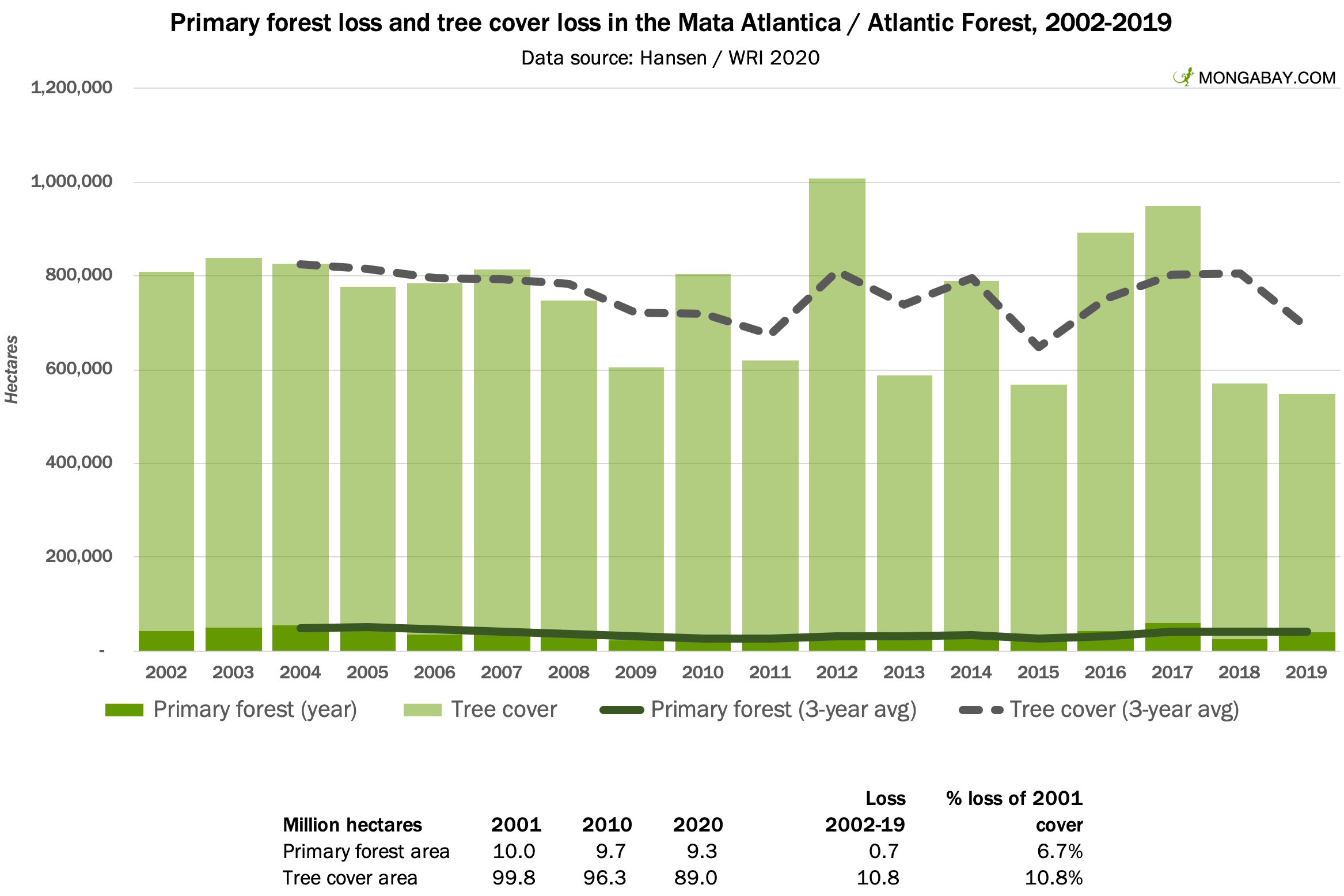 Deforestation trend: The rate of primary forest loss in the Atlantic Forest—known as the Mata Atlântica in Brazil—has slowed since the 20th century, with annual deforestation remaining relatively flat.

The Chocó rainforest extends from southern Panama and along the Pacific Coast of South America through Colombia and Ecuador. It is the world’s wettest rainforest and has the lowest deforestation rate of any of the regions covered in this post. The Chocó is home to both Amerindian tribes and Afroindigenous or “maroon” communities. 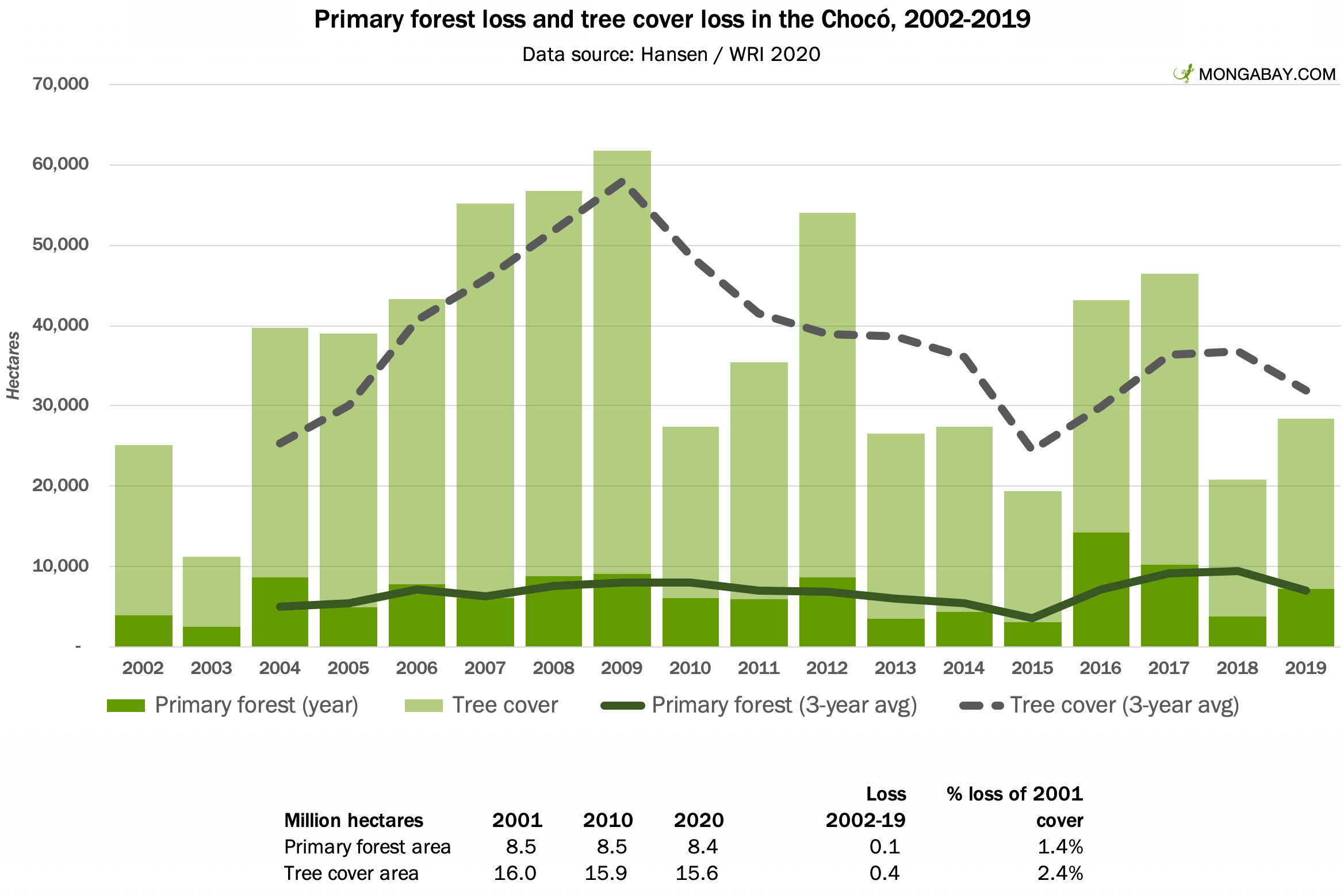 Deforestation trend: Primary forest loss in the Chocó amounted to 1.4% of its 2001 extent between 2002 and 2019. Ecuador and Panama accounted for a disproportionately large share of this loss.

This list is limited to the ten largest rainforests. Missing the cut are the forests of the Eastern Himalayas; East Melanesian Islands; the Philippines; Indian Ocean islands, including Madagascar; Eastern Afromontane; the Western Ghats and Sri Lanka; the Caribbean; and Polynesia-Micronesia.