The largest mangrove forest in the world in the Sundarbans is shrinking. A new coal power plant might wreak havoc on the already vulnerable region.

The Sundarbans- the largest continuous mangrove forest on the planet that spans more than 10 000 sq km along the Bay of Bengal- is shrinking. Thanks to human encroachment and climate change, the forest has been losing almost 16 sq km of vegetation per year since 1991.  Earth.Org’s own analysis based on satellite imagery shows that in Bangladesh, home to the largest swath of Sundarbans mangroves, the forest has lost 442 sq km of its vegetation in the last 28 years. 71% of the forested coastline is also retreating by as much as 200 metres a year due to coastline erosion.

Containing multiple UNESCO Natural World Heritage sites within itself, the Sundarbans forest is home to a wide variety of plant and animal species. The flora is comprised of a rich mosaic of different types of vegetation; half of all known 110 mangrove species are found within the delta. It is home to over 260 bird species, Indian otters, spotted deer, wild boar, fiddler crabs, mud crabs, three marine lizard species and five marine turtle species dwell in this impervious maze. The forest also hosts endangered species like the estuarine crocodile, Indian python and the iconic Bengal tiger. The mangrove ecosystem plays an indispensable role as breeding and nursery ground coastal fisheries in the Bay of Bengal.

The Sundarbans is also a natural barrier that protects over 6.5 million people who live in the region from tides and cyclones. For the inhabitants of surrounding areas, the forest is an abundant source of subsistence.

Human interference in the form of upstream agriculture, industrial shrimp farming, logging and hydrologic interventions have been gradually deteriorating the mangrove ecosystem.

Active human encroachment is coupled with the collateral effects of the climate crisis.  The forested coastline is being rapidly overtaken by rising sea levels and storm surges. The increased salinity of the soil has made hectares of mangroves weaker and more vulnerable to retrenchment. Scientists warn that a continuing coastline retreat will trigger major mangrove disappearance within the next 50 years. 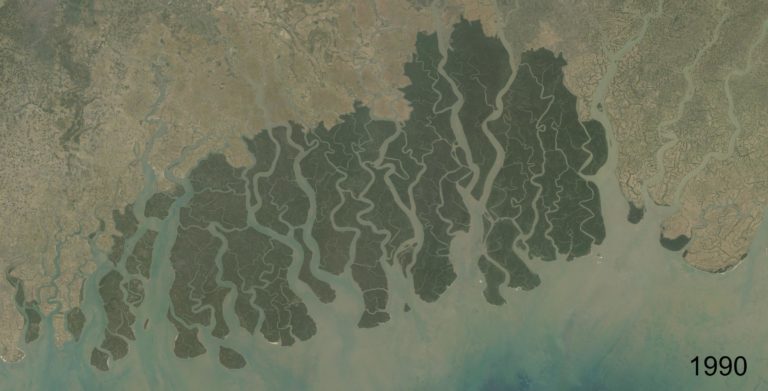 Construction of a new cross-border coal-fired power plant is underway in the nearby town of Rampal. Despite strong opposition from UNESCO, the 1320-megawatt plant is set to start generating power by March 2021.

Preservation of Mangrove Forest in Sunderbans

The bilateral cooperation between Bangladesh and India and the Ramsar Convention had improved conservation strategies at the Sunderbans in the last decade. But experts say it is highly critical to avoid human pressure on the wetland and its resources in the future too. Both governments need to take environmental concerns into account while installing industrial projects near the mangrove forest.

Governments should invest towards agricultural techniques that mitigate damage caused by environmental changes and by the encroaching threat of the fossil fuel industry. Traditional practices endemic to the region can adapt to periodic ecosystem disruptions, such as rising sea levels or waterlogging. An example includes a practice in Bangladesh of implementing floating cultivation systems that utilise soilless beds made from seaweed. Sustainable and regionally traditional agriculture can significantly increase the market value of commodities. If traditional and sustainable agriculture becomes the norm in the region, the value of commodities will rise and revenue from foreign markets will increase substantially. With more diversified revenue streams, the state can justify the higher cost of implementing renewable energy infrastructure rather than allowing the region to become reliant on fossil fuels.