The Role of 3D Printed Solutions in Combating the Climate Crisis

Is it possible to 3D print objects that can help combat climate change? Explore how 3D printed solutions may help nations fight the negative effects of this crisis and develop a more sustainable future.

Amid the worsening climate crisis, experts warn that it will have devastating effects on the planet, including more frequent and intense droughts, rising sea levels, melting glaciers, and severe natural disasters.

The world has already started to live with the negative consequences of climate change, from wildfire seasons arriving earlier than expected in the US to the historic high temperatures in Southeast Asia to more mass bleaching events in Australia’s Great Barrier Reef.

This is our most critical decade to mitigate and adapt to climate change. Many scientists and researchers are looking at implementing new technologies to fight climate change. One technology that might help accomplish this goal is 3D printing.

One of the latest reports released by the Intergovernmental Panel on Climate Change (IPCC) stated that nations need to rapidly move away from fossil fuels and adopt sustainable practices if there’s any chance of combating the crisis as the goal of limiting global temperature rise to 1.5C – as stated in the Paris Agreement – could be out of reach as soon as 2030.

No country is immune to the effects of climate change. It is understood that the crisis could exacerbate inequalities worldwide and disproportionately impact vulnerable groups of people. Technological innovation has contributed to increased human activity on the planet, but it may also be used to combat the climate crisis. One option is 3D printing.

3D printing already has numerous applications in prominent industries, such as:

The growth of the 3D printing industry could help nations make more impactful contributions with their climate action and mitigation. Additionally, it could help open up more job opportunities for people, especially in the wake of The Great Resignation. In June 2021, it was reported that 41% of the global workforce was considering quitting their jobs. People may be interested in transitioning to the 3D printing field if it becomes more prevalent.

However, many people would agree that 3D printing was a buzzword from a few years ago. Still, the technology never reached a point of widespread adoption. 3D printing has progressed much more slowly than expected, considering how revolutionary the technology is and its original, optimistic growth projections. So, how can 3D printing be used to fight climate change?

A team of researchers from the Edinburgh-based Lacrima Foundation created the world’s first 3D-printed wood log beehive to help conserve the honeybee population. Honeybees perform critical pollination activities on much of the world’s crops and help ensure global food security. There could be far-reaching implications if their population declines.

The 3D-printed hive is specially designed with a biodegradable wood-based composite and allows the insects to thrive in an undisturbed environment. They can even be installed in trees to mimic the natural conditions honeybees typically reside in. 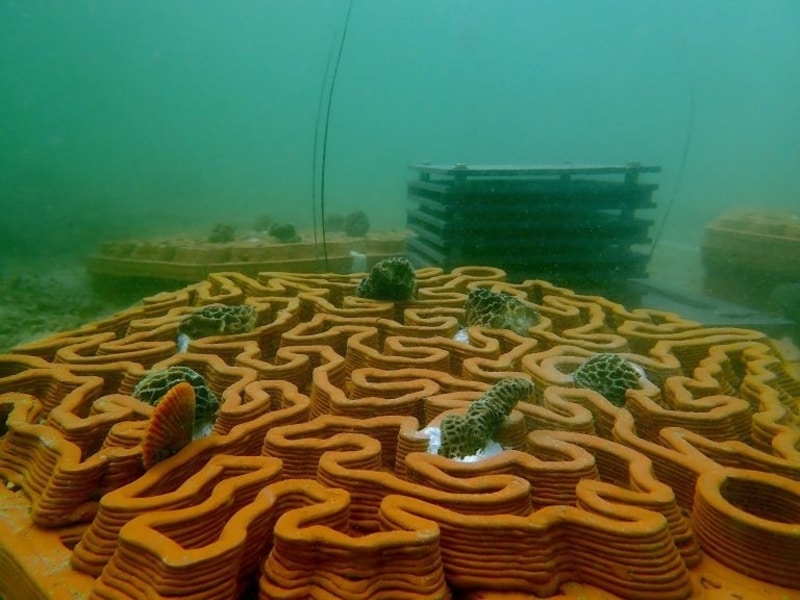 Marine scientists and architects in Hong Kong recently worked on a 3D printing project to restore coral reefs at Hoi Ha Wan Marine Park, located in Sai Kung. The team developed 3D-printed terracotta “tiles” that mimic the natural shape of brain coral and are placed on the seafloor to regenerate coral reef communities.

The tiles have three parts: the legs, nine grid layers and six coral-like layers. Essentially, the tiles are anchoring beds for corals – they attach to the tile, grow and spread to other areas of the seafloor. The tiles are also environmentally friendly. The team hopes tiles will degrade over time and disappear once coral communities are naturally rebuilt.

The building sector is a major contributor to the climate crisis and accounts for almost 40% of greenhouse gas (GHG) emissions annually. The University of Technology Sydney (UTS) collaborated on a project with architecture firm BVN to design the world’s first robotic 3D-printed air diffusion system, called Systems Reef 2.

It is designed to fit existing air conditioning units and offers a 90% reduction in embodied carbon compared to traditional systems. Systems Reef 2 is also made from recycled plastic waste. Once it reaches the end of its life cycle, it will help fuel the circular economy.

Deforestation is causing the world to lose precious natural sinks, where trees help absorb and store carbon from the atmosphere, which are important in combating global warming. Trees are also an essential energy source, and harvesting them releases more GHG emissions and are not environmentally sustainable.  To help alleviate the issue, External Reference, an architecture studio located in Barcelona, Spain, recently developed a 3D-printed stylish Christmas tree that can absorb carbon dioxide in hopes that fewer natural trees – typically fir, spruce and pine –would be harvested for use as Christmas trees in homes and businesses. As up to 30 million Christmas trees are sold each year in the US alone, this solution could be a notable win for those looking for more environmentally friendly festivities.

The tree was created using 3D printing and a chemical product containing 100% natural minerals. It essentially purifies the air by eliminating CO2. It’s made of a bioplastic polymer consisting of corn dextrose mixed with a material called CO2pure.

3D printing is a synonym for additive manufacturing. Manufacturers can leverage it to contribute to the circular economy and be more sustainable. One manufacturer, Stratasys, recently committed to focusing on 3D printing applications and embracing “mindful manufacturing”.

The company plans on finding new ways to reduce waste, reuse critical materials and use recycled packaging for its products. Stratasys has also mentioned it seeks to ensure designers, engineers and manufacturers have local and on-demand additive manufacturing solutions and help take a stronger stance in terms of climate action. Other companies may follow suit, especially after the Biden administration announced an initiative to help fuel the widespread adoption of 3D printing in manufacturing.

The various 3D printing applications above seem ideal for fighting climate change, but using this technology comes with some drawbacks.

Users may face hazards during a 3D printing project depending on the printer and the materials used to create objects. Some machines use advanced laser technology, which may present unique risks compared to those that use high temperatures to melt materials.

Examples of common 3D printing hazards include static, fire or explosion, skin contact with toxic materials, and potential inhalation of chemicals. 3D printing may help fight climate change, but it can sometimes come with a risk of injury for the user.

3D printing is not widely used, meaning it is still not the most affordable piece of equipment. Industrial 3D printers sometimes cost hundreds of thousands of dollars, so the initial cost of starting a project is high. Materials to create 3D printed objects are also expensive. Users could find it challenging to obtain these materials due to ongoing supply chain snarls.

Even if 3D printers are used to help reduce the impacts of climate change, the amount of energy a printer consumes cannot be ignored.

Typically, large 3D printers consume more energy than smaller ones. Still, high power consumption can increase an individual’s or company’s carbon footprint. It would be important to consider using more energy-efficient solutions to keep usage down.

No one technology can help the world overcome the negative effects of climate change, but more companies may use 3D printed solutions to make a meaningful difference. It’ll be interesting to see if this option becomes more mainstream and how it can be used to support a more sustainable future.