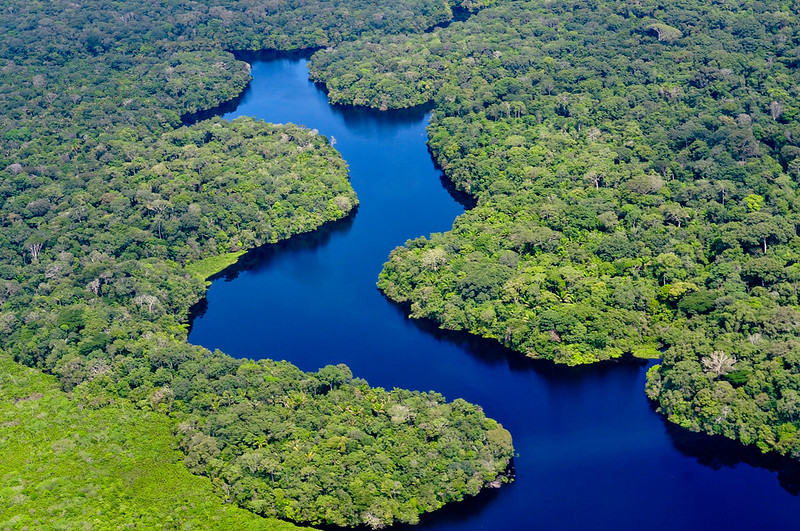 New research has found that a larger part of the Amazon rainforest is at risk of crossing a tipping point where it could become a savanna-type ecosystem than previously thought. In around 40% of the rainforest, rainfall is now at a level where the forest could exist in either state- rainfall or savanna.

Based on computer models and data analysis, the research- published in Nature Communications– shows that parts of the Amazon region are currently receiving less rain than previously and this trend is expected to worsen as the region warms due to rising greenhouse gas emissions.

Rainforests are very sensitive to changes that affect rainfall for extended periods. If rainfall drops below a certain threshold, areas could shift into a savanna state.

The research team focused on the stability of tropical rainforests in the Americas, Africa, Asia and Oceania. They were able to explore how rainforests respond to changing rainfall and simulate the downwind effects of disappearance of forests for all tropical forests. By doing this, they answered two questions: “if all the forests in the tropics disappeared, where would they grow back?” and “what happens if rainforests covered the entire tropical region of Earth?”

The team ran the simulations starting with no forests in the tropics across Africa, the Americas, Asia and Australia and watched forests emerge over time in the models, which allowed them to explore the minimum forest cover for all regions.

Lead author Arie Staal, formerly a postdoctoral researcher at the Stockholm Resilience Centre and the Copernicus Institute of Utrecht University, says, “The dynamics of tropical forests is interesting. As forests grow and spread across a region this affects rainfall- forests create their own rain because leaves give off water vapour and this falls as rain further downwind. Rainfall means fewer fires leading to even more forests. Our simulations capture this dynamic.”

The team then ran the models a second time, in a world where rainforests entirely covered the tropical regions of Earth. However, in many places there is an insufficient amount of rainfall to sustain a rainforest, so in many places, the model forests shrank due to a lack of moisture. Staal says, “As forests shrink, we get less rainfall downwind and this causes drying leading to more fire and forest loss: a vicious cycle.”

Finally, the team examined what will happen if emissions keep rising this century along a “very high-emissions” scenario used by the IPCC. The team found that as emissions grow, more parts of the Amazon lose their natural resilience, become unstable and more likely to dry out and transform to a savanna-type ecosystem. Even the most resilient parts of the rainforest will shrink. This means that more of the rainforest is likely to cross a tipping point as emissions reach very high levels.

The conclusion? The smallest area that can sustain a rainforest in the Amazon contracts a substantial 66% in the high-emissions scenario.

Ingo Fetzer of the Stockholm Resilience Centre, says, “We understand now that rainforests on all continents are very sensitive to global change and can rapidly lose their ability to adapt. Once gone, their recovery will take many decades to return to their original state. And given that rainforests host the majority of all global species, all this will be forever lost.”

In comparison, the minimal and maximal extents of the rainforests of Indonesia and Malaysia are relatively stable because their rainfall is more dependent on the ocean around them than on rainfall generated as a result of forest cover.

It is important to note that the study only explored the impacts of the climate crisis on tropical forests; it did not assess the additional stress of deforestation in the tropics due to agricultural expansion and logging. It is possible then that the Amazon may cross a tipping point even sooner because of relentless deforestation in the region, encouraged by Brazilian President Jair Bolsonaro.

To mitigate deforestation of the Amazon by human impact, international and domestic actors must cooperate to find a solution. While the Bolsonaro administration has made its stance on deforestation and environmental conservation abundantly clear, the country’s decentralised federal governing system allows for a great deal of executive and legislative autonomy for Brazilian states. Individual states can break from the party line, as demonstrated during the country’s COVID-19 outbreak, when states opted to dismiss the President’s recommendations and implement their own ordinances to soften the effects of the virus. Individual states and governors will need to unite behind a common goal of slowing deforestation. Once this happens, international organisations and domestic NGOs could bypass President Bolsonaro’s protectionist policies and deal directly with the states that govern areas at risk of deforestation, by subsidising economic programmes that incentivise illegal loggers to pursue other opportunities.