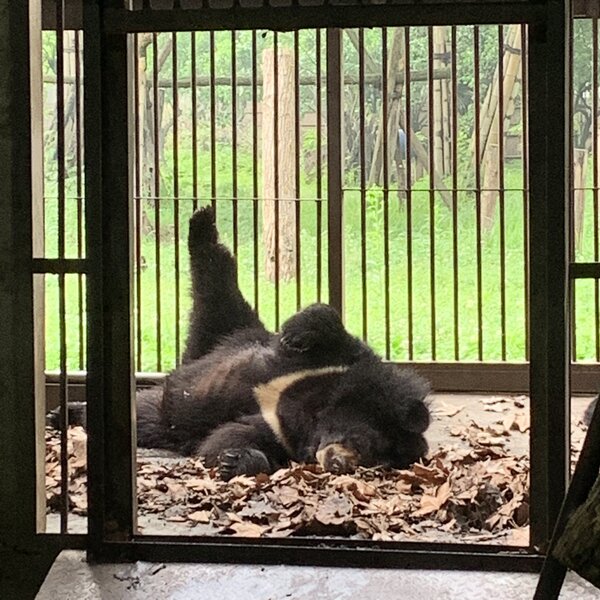 Animals Asia, an organisation working to end bear bile farming, has safely transferred 101 Asiatic black bears (or moon bears) from an ex-bear bile farm in a southern province of China to its bear rescue centre in Chengdu, China. The 1 250 km journey from Nanning to Chengdu has been dubbed ‘the largest operation of its kind ever undertaken by any animal welfare organisation.’

The Journey of 101 Bears

The bears’ story began in 2013, when the new owner of a bile farm in Nanning decided not to be a part of the industry and reached out to Animals Asia. When the organisation was handed over 132 bears initially, they needed intensive medical care after undergoing invasive surgery and years of bile extraction. Even though the initial agreement was for Animals Asia to take over the health and vet care of the bears that were kept at the facility and convert the farm into a second bear sanctuary in China, a series of unfortunate events forced the organisation to bring the bears back to the existing bear rescue centre in Chengdu. It took eight years to overcome all the legislative and proprietorship issues, and combined with, COVID-19, didn’t make a homecoming possible for the bears. The bear and vet team at Animals Asia never lost hope, however.

When all the conditions were met and challenges overcome, the logistically complex mission took place in three phases from 19 April- 27 May, with nine trucks per phase carrying the 101 bears the 1 250 km from the ex-bile farm in Nanning, Guangxi province to the Chengdu Bear Rescue Centre in Sichuan province. Each phase took around three days, with each bear individually transferred into a transport cage prior to loading onto the trucks, constantly monitored, watered, fed and cared for by Animals Asia’s specialist team of vets and bear carers along the way. The bears were continuously monitored by CCTV cameras to ensure they remained safe and healthy along the way.

After arriving at the sanctuary, they spent their first 30 days in quarantine before slowly being integrated with the rest of the population. For most of these bears, it was the first time they experienced being outside, feeling the sun, stepping on the grass.

Animals Asia China’s Bear & Vet Team Director, Ryan Marcel Sucaet, said, “We’re so proud of how these bears have handled the journey. Most of them have spent their entire lives in confinement on the bear farm. To be suddenly transported halfway across China to their new home could have been very distressing for them, but our team did such an incredible job of keeping them calm, well-fed, stimulated and comfortable along the way. The successful completion of this operation shows that large scale relocation of vulnerable species is entirely possible and feasible. The operational know-how could be applied to future large-scale relocations of other species and adopted by other animal welfare organisations as well.”

Animals Asia Founder and CEO Jill Robinson, says, “It’s an amazing feeling. We’ve rescued over 600 bears across China and Vietnam in the last two decades, but we have never attempted anything on this scale.”

Watch a video of the operation below:

An Increased Focus on Wildlife Protection in China

Animals Asia believes that a real and long-term change can only be achieved by working together constructively with all stakeholders, including the authorities and the local communities. As a result of years of collaborative work with the authorities towards improving animal welfare, running educational and internship programmes for local vets in China, the organisation garnered vital support from the local community that made this operation possible. These 101 bears couldn’t be moved to their final homes if the new owner of the ex-bear farm in Nanning didn’t decide to stop the bile farming and call Animals Asia, or without the local authorities’ assistance and approval of the necessary transport permits for this momentous operation. This demonstrates the positive change towards animal welfare and wildlife protection in the region, as China makes significant legislative amendments to combat the illegal wildlife trade and protect threatened species.

Animals Asia is devoted to ending bear bile farming and improving the welfare of animals across Asia. We promote compassion and respect for all animals and work to bring about long-term change. Founded in 1998, the Animals Asia team has been rescuing bears since 1994. We operate award-winning bear rescue sanctuaries in China and Vietnam, and we are the only organisation with a bear sanctuary in China. Our founder and CEO, Jill Robinson MBE, Dr.med.vet. h.c., Hon LLD is widely recognised as the world’s leading authority on the cruel bear bile industry, having campaigned against it since 1993.