Pandemics and Pangolins: The Use of Wild Animal Parts in Traditional Medicine 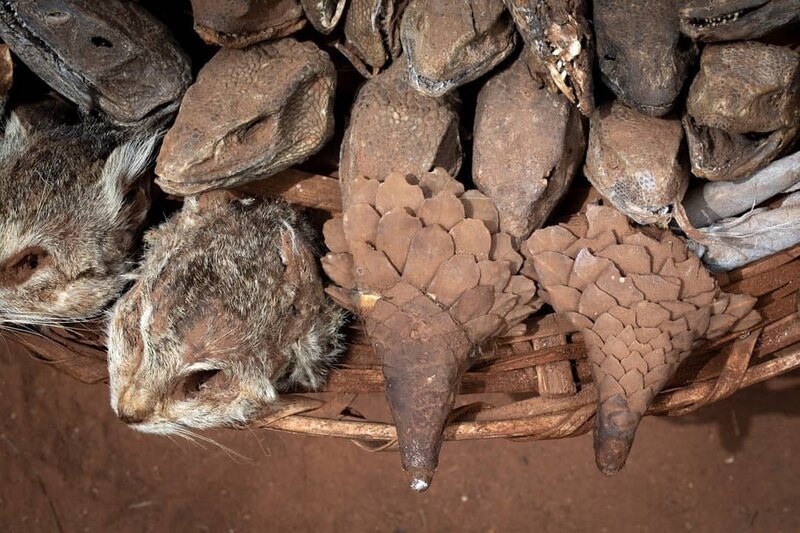 We have all learned considerable lessons during the course of the coronavirus pandemic, but none harsher than our fraught relationship with the natural world. Since COVID-19 was first transmitted in 2019 from a ‘wet market’ in Wuhan, it has spread to nearly every country in the world, infected over 170 million people and caused unprecedented economic and social devastation. Such markets are common across Africa and Asia, and although they usually offer produce such as meat, seafood and vegetables, some also sell live wild animals and their body parts, usually for traditional medicine.

The scale of the virus’s destruction has called into question the legitimacy of such markets. This is not the first time that a dangerous disease has passed from animals to humans, and it won’t be the last. At least 61% of all human pathogens are zoonotic, and past epidemics such as SARS, EBOLA and HIV, also arose from human-animal proximity.

The existence of wildlife markets is no longer merely an issue of animal rights, but one of public health, and the pandemic has demonstrated that we are not separate from the natural world but part of it. 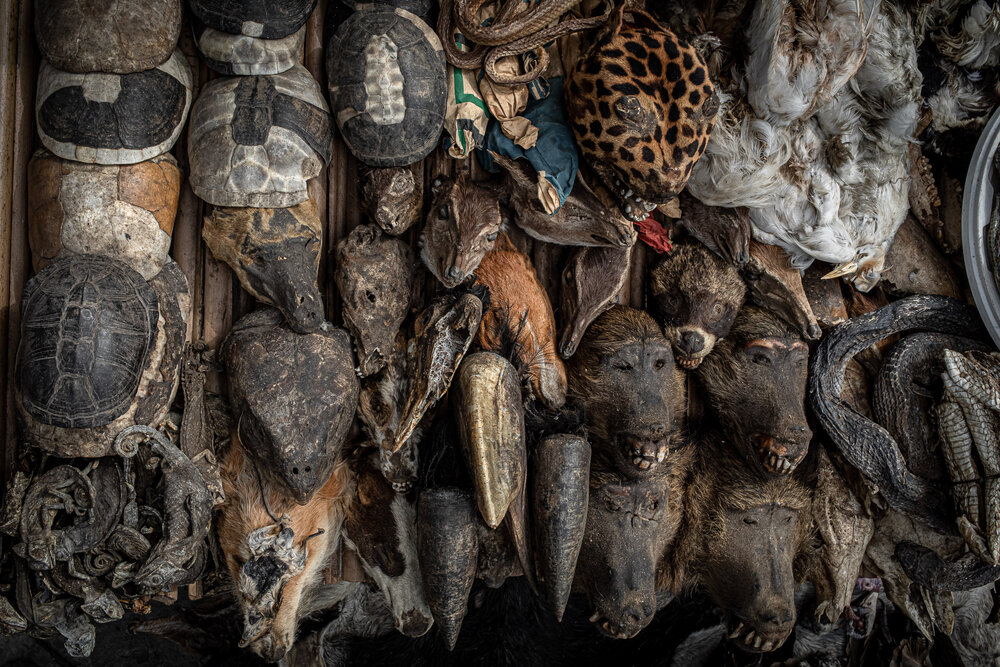 The heads of hornbills and baboons at a market outside of Ouidah, Benin.

From dried-out baboon and hornbill heads stuffed in buckets in Benin, to cages of live macaques, bats and civets stacked on top of each other in Indonesia, such scenes indicate our exploitation of the natural world.

These markets exist to facilitate the Wildlife Trade; the fourth largest illegal industry in the world. Whether traded as food or pets, furniture or fashion, the trade is highly lucrative, worth an estimated $7-23 billion per year and involving at least 7000 different species. 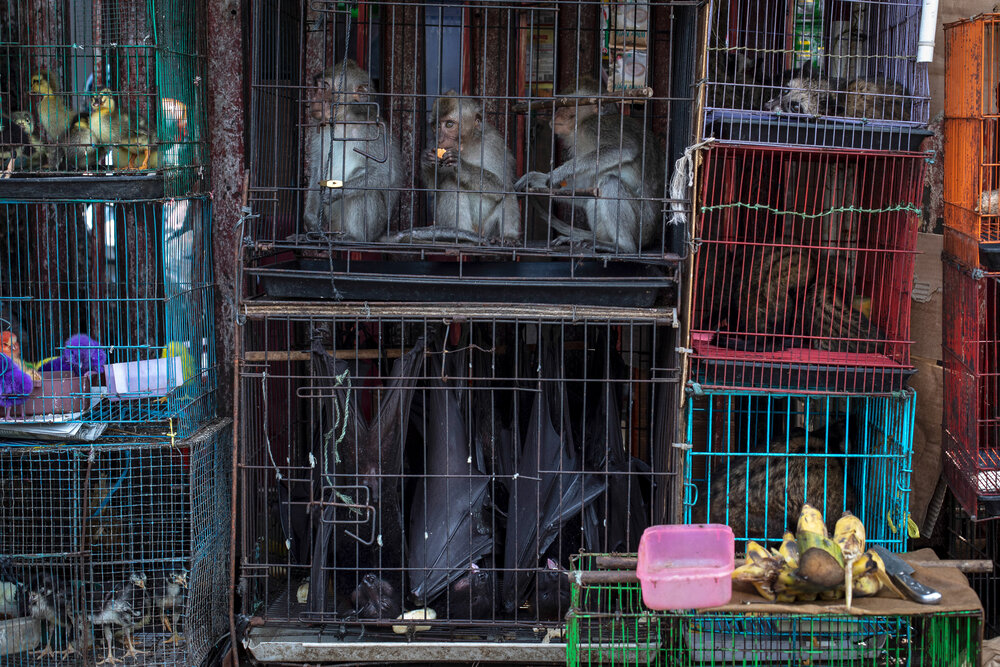 One driving force behind these markets is the use of animals ‘ body parts for Traditional Chinese Medicine (TCM). From tiger bones and bear bile, to elephant tusks and pangolin scales, few wild animals are off-limits. These products are often found in markets across Asia, and are used to cure a variety of ailments, including kidney pain, sexual dysfunction, and even laziness.

In order to supply markets with TCM products, there are highly sophisticated trafficking routes facilitating the trade; such routes span continents and involve poachers, middlemen and wealthy stakeholders. 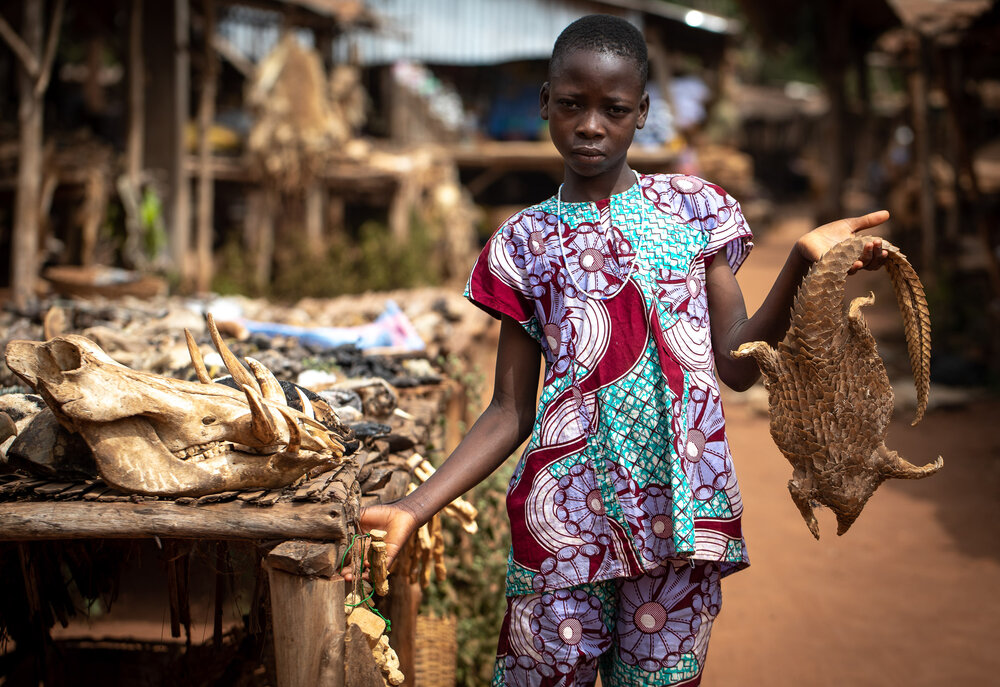 A young lady holds up the dried carcass of a pangolin, the most trafficked mammal on Earth. Pangolins are thought to be reservoirs for infectious diseases.

The TCM industry is highly lucrative, worth according to some counts, over $60 billion per year. The value of animal parts increases dramatically as they make their way from source to market country. For example, whilst the average poacher will receive from $2.5-9 per kg of pangolin scales, the price in demand countries can reach up to $700, a mark-up of 600%.

The demand for animal parts for TCM is pushing species to the brink of extinction. The statistics make for grim reading. For example, 2.7 million pangolins are poached every year, whilst more than 100,000 African elephants were killed between 2014-2017 for their ivory – approximately one every 15 minutes. 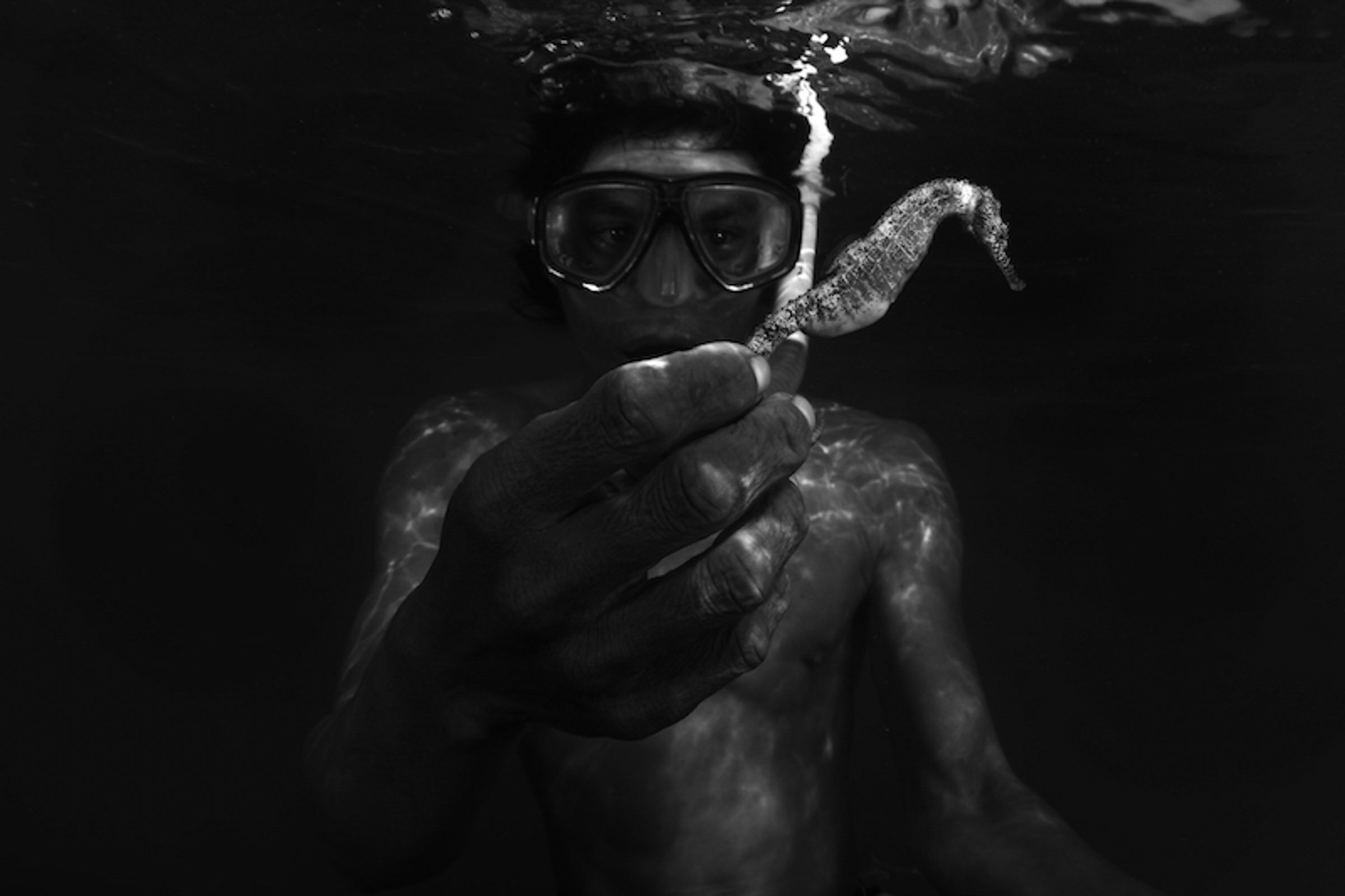 The Bajau tribe target seahorses which will be ground up and sold in tea, as they are believed to have medicinal qualities. As a result of the trade, around 50 million seahorses are killed every year, pushing many species to the brink of extinction.

Despite the huge demand for animal parts in TCM, there is no scientific evidence supporting the efficacy of these treatments. For instance, pangolin scales and rhino horns are made of keratin, the same material found in our fingernails and hair.

So why does this industry, which is destroying wildlife populations and causing untold suffering, continue to exist?

The use of animal parts in TCM is deeply entrenched in the heritage of many societies across Asia. The use of traditional medicine in China dates back to the third century BC, and there is a body of literature detailing how animals ‘ body parts and plants can be used across a broad spectrum of health issues. 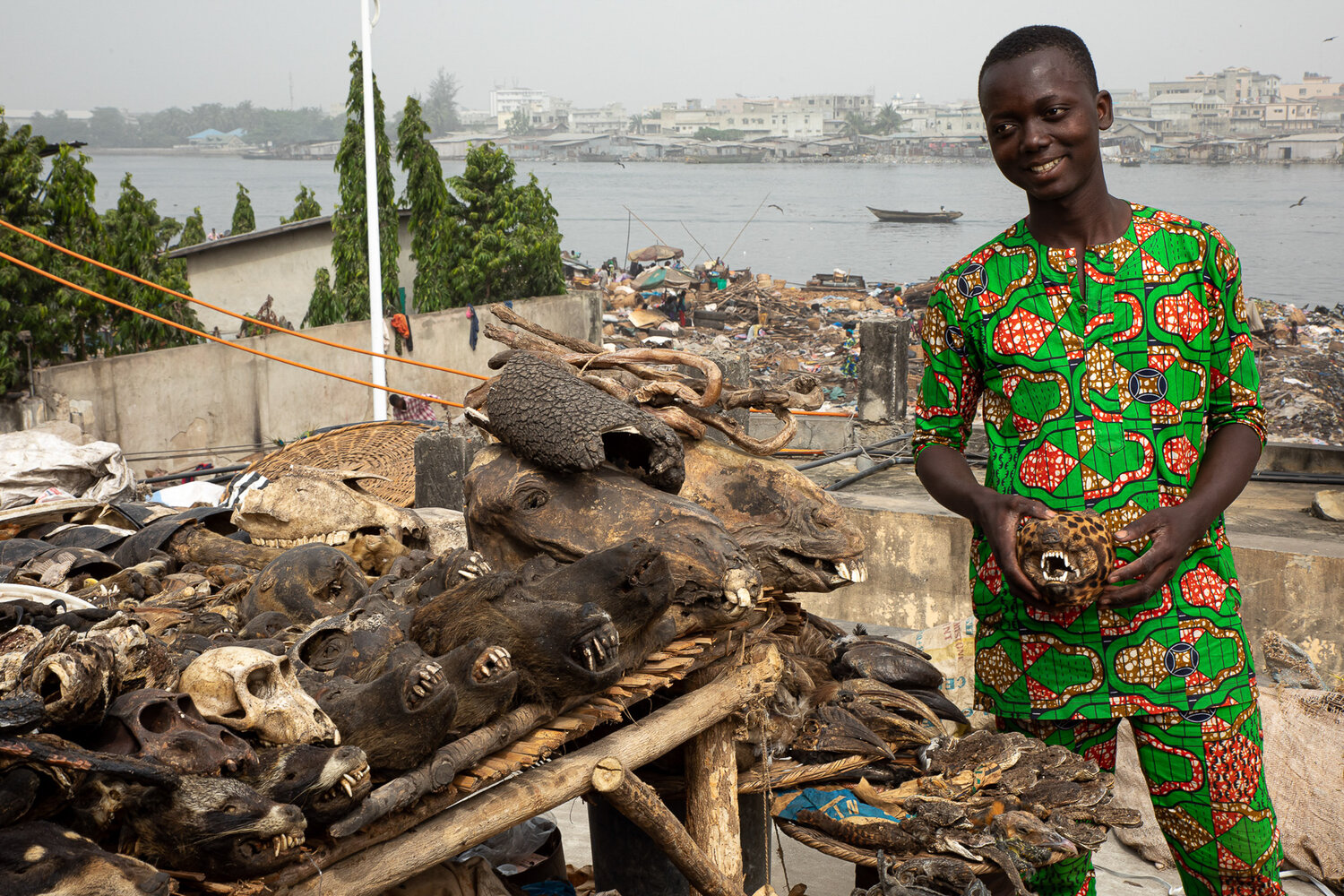 A boy sells animal heads to be used in voodoo practice in Benin. Voodoo is a cultural practice that dates back thousands of years.

The situation is therefore difficult. Whilst it is problematic to cast judgement on a historically and culturally important practice through a Western lens, it is also undeniable that the industry is having a catastrophic impact on the future prosperity of wild populations.

As well as being culturally important, the Illegal Wildlife Trade also creates numerous economic possibilities to those living near wild populations, many of whom live in poverty. If one has to poach and then sell a pangolin on the black market in order to save their family from starvation, can they really be demonised?

It is an all too familiar feeling when documenting issues of human-animal conflict that these situations are not black and white, but incredibly complex, with many factors at play. 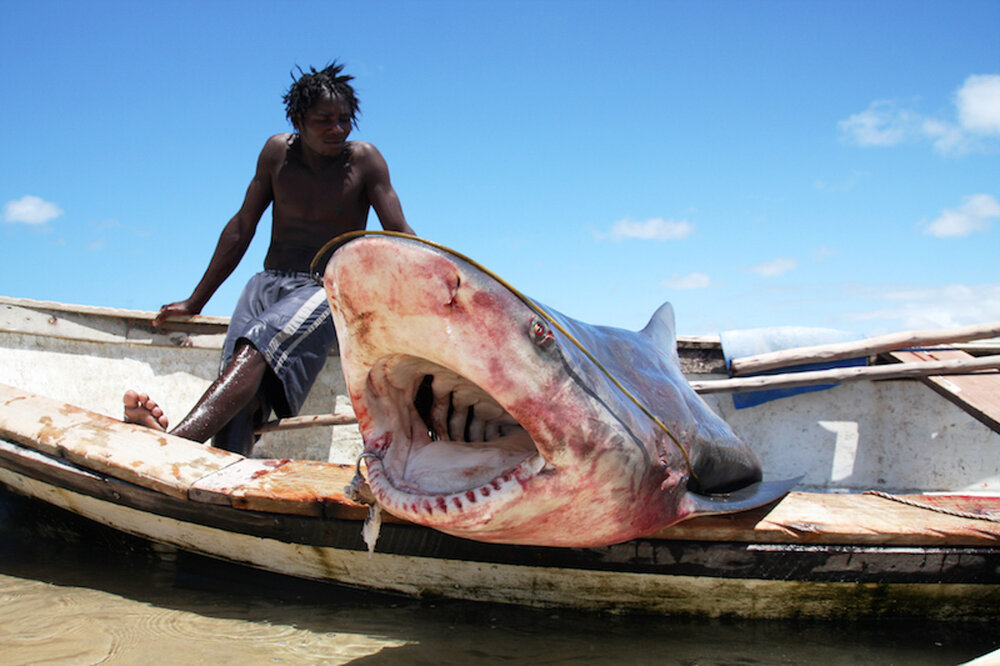 A Mozambiquan fisherman admires the catch of his bull shark. Fishermen can get up to $200 for the fins of a large shark, whereas when using their traditional methods, they receive just $50 a week.

Although the pandemic has brought countless difficulties to everyone, one positive outcome is that it has brought to the foreground the fragility of our current relationship with the natural world.

We have seen first-hand the damage that zoonotic diseases can do to our livelihoods, and we have learned that we are not separate from the natural world, but very much a part of it.

There needs to be a global shift in attitude away from perceiving animals as commodities, existing for our entertainment and consumption – because as we’ve seen, when kept in too close proximity to us, they can bite back.

Featured image and all other images by: EO Photographer Aaron Gekoski

This article was originally published on williamfortescue.com, written by Izzy Sasada, and is republished here as part of an editorial partnership with Earth.Org.