China vs US: Who is Winning the Electric Vehicle Technology Race? 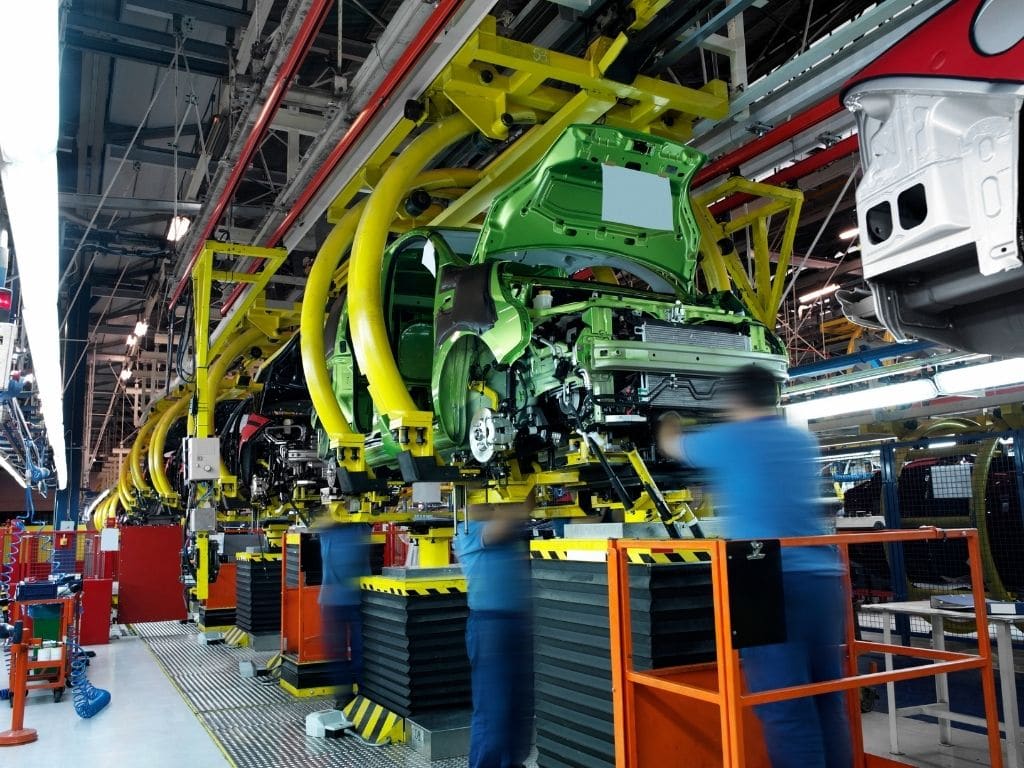 In recent years, China has been doing its best to enhance its national image and challenge the hegemony of the United States, and tackling climate change has become the latest of these competitive arenas. China’s ambitious vision includes a flourishing electric vehicle technology development and industry, or new energy vehicles (NEVs), charging ahead of the US, which is lagging behind in terms of relevant policies, sales and even charging stations. However, China’s electric vehicle promises are made with ulterior motives in mind, as the country seeks to reduce its reliance on energy imports in case of naval blockade and economic sanctions led by the US. For China, self-sufficiency may be more important than its environmental commitment.

The NEV Progress Between China and the United States

As of 2020, more than three million passenger electric vehicles were sold in China, over double the number sold in the US. China has over 400 registered brands in the New Energy Vehicle (NEV) industry and over 500,000 electric buses, which accounts for 98% of the global figure, on top of China’s 14th five-year plan (2021-2025) emphasising significant expansion of the NEV industry.

The Chinese government targets 20% of all new car sales by 2025 to be electric, even adopting NEVs as the new generation of governmental vehicles. Different Chinese cities have various NEV adoption plans. For example, Shanghai targets raising half of all new car sales to be pure electric vehicles, including buses, trucks, postal vehicles and government cars by the middle of the decade, which is even more ambitious than the nation’s 20% target by 2025. Currently, China has about 575,000 electric buses, 78,000 of which are newly registered. China also has over 28,000 electric trucks and 157 heavy-duty vehicles’ models  are available from 2020 to 2023.

In comparison, US President Biden plans to replace the government’s vehicle fleet with electric vehicles technology in response to his administration’s environmental commitment. He signed a “Buy American” executive order in 2021 to support the national electric vehicle technology manufacturing industry and to aim for 50% of new vehicle sales to be electric-powered by 2030. However, as of June 2021, less than 4% of the new cars sold across the US were electric or plug-in hybrids, amounting to only 5,000 electric buses, 720 electric trucks and around 95-118 heavy-duty vehicles’ models in the United States, falling behind China in niche markets.

Biden’s plan not only fulfils environmental promises but also aims to catch up to competition from China and Europe. Up to 2019, the US still had 645,000 government fossil fuel-powered vehicles and consumed 375 million gallons of gasoline and diesel fuels. Despite concerns about levels of air pollution and Biden’s EV plan, the President announced initiatives for stricter use of American-made components in government-purchased vehicles. This may increase the difficulty to adopt all EVs as soon as possible because the manufacturing cost would be much higher than buying foreign-made components. In this sense, American-made electric vehicle technology would be more expensive and less competitive than the Chinese EV vehicles. 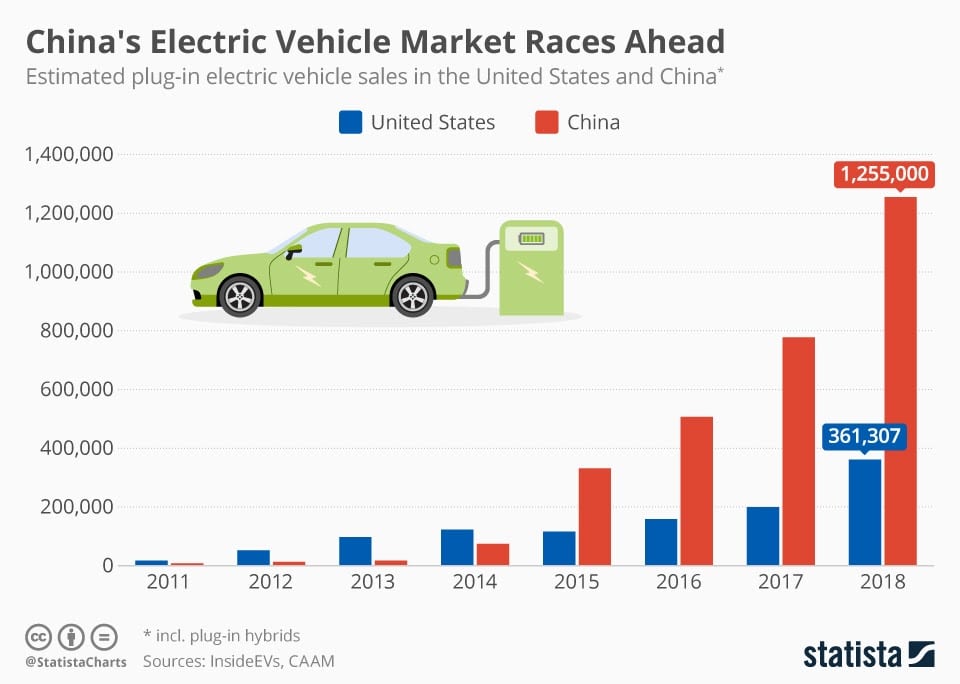 Comparing the EV progress between China and the US:

Based on the table above, China is prevailing in this electric vehicle technology competition as they have a clearer time frame, national goals and formidable executive power. The United States is lagging behind China, leading President Biden to attract Americans with incentives that could help accelerate the development of the EV industry in domestic and foreign markets.

China launched a detailed plan outlining EV goals in the following 10-15 years. For example, the New Energy Automobile Industry Plan (2021-2035) targets 20% of vehicle sales to be NEVs by 2025 to strengthen international competitiveness and enhance China’s industrial transformation. The China Society of Automotive Engineers also set a goal of over 50% EV sales by 2035. Together, these goals work to achieve China’s 2060 carbon neutrality ambitions. Further, China has set annual NEV credit targets for manufacturers as a percentage of their annual vehicle sales. Each EV can receive between 1 and 3.4 credits depending on its characteristics. Since June 2020, “fuel-efficient passenger vehicle” bonuses have also been counted to corporate NEV credits.

To fulfil these upcoming targets, the Chinese Ministry of Finance and the Ministry of Industry and Information Technology stated that any NEV purchased between January 1 2021 and December 23 2022 will be exempt from vehicle purchase tax. Government subsidies will also be extended until the end of 2022. Around USD$3,800 of government subsidies per vehicle will be paid for electric vehicles with a range of at least 400 kilometres. Additionally, the government will implement reduced taxes for used-car dealers, as well as initiatives promoting electric-car sales in rural areas.

The US has not been nearly as hands-on as China or Europe in supporting the EV industry, thus is lagging behind in this EV competition. For example, the tax credit was not renewed when General Motors and Tesla reached the 200,000 sales limit per automaker in 2018. Nevertheless, the governor of California issued an Executive Order for all new car sales to be zero-emission vehicles (ZEV), including passenger cars and light trucks, by 2035. Other state-level policies, such as the Low Carbon Fuel Standard, were introduced in support of EV adoption, especially in the heavy-duty vehicle sector. The US has also proposed a tax credit expansion to encourage customers to purchase domestic electric vehicle technology, with tax credits up to $12,500 per vehicle. Despite these policies, the US has to catch up or the flourishing EV market would be dominated by Chinese automobile manufacturers.

Can Infrastructure Keep Up With Demand?

There are currently 716 battery swapping stations across China, with Beijing and Guangdong boasting the most. However, these charging stations and piles are mostly located in affluent regions due to the higher number of EVs bought there. Even though new EV plans continue to roll out including the inland province of Guizhou’s goal to establish at least 4,500 EV charging piles in 2021, 5,000 in 2022 and 5,500 in 2023, the national charging infrastructure is still largely inadequate, especially in achieving the central government’s EV plan in rural and underdeveloped areas due to a lack of economic incentives.

The United States has struggled to bolster EV development to the same degree. According to the Department of Energy, there are only 43,800 EV charging stations and 136,500 gas stations across the country. As of January 2019, both California and Florida are home to the highest number of charging stations in the US, amounting up to 5,360 and 1,248 respectively. The US needs at least 2.4 million charging stations to support 26 million electric vehicles by 2030. An estimated  $28 billion investment is also required for public and workplace chargers. President Biden has requested only $15 billion to establish 500,000 charging stations as part of his $3 trillion infrastructure bill, yet Congress has asked to cut the proposal in half so that only 250,000 fast chargers can be built. Nonetheless, it is a good starting point to compete with China’s rapid EV growth.

Image 2: An estimated U.S charging infrastructure and annual investment required from 2021 to 2030. (Source: The International Council on Clean Transportation) 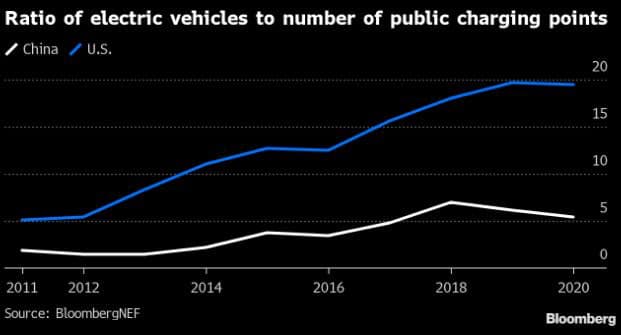 Image 3: Ratio of electric vehicles to number of public charging points between China and the U.S (Sources: Bloomberg)

China is clearly taking the lead in the global EV development by incentivising the public and private sectors, boost NEV sales and build ancillary facilities at the same time. The US on the other hand, talks of an enormous plan but current facilities and EV sales are unable to keep up with China’s progress.

Although China is fulfilling its global environmental commitments, it is undeniable that the country is using the EV market to oust the US in the burgeoning EV sector. In supporting its EV sector both politically and economically with generous incentives, the country’s electric-vehicle sector is miles ahead of the United States. American politicians are exhibiting concerns considering the US automobile industry has dominated the global market for decades, and is very much on track to be overtaken by China’s next-generation EV industrial sector.

Jennifer Harris, a fellow at the Roosevelt Institute, pointed out that “US firms will continue to lose ground in the competition with Chinese companies if Washington continues to rely so heavily on private sector research and development.” For example, the Chinese government has been directly providing subsidies and protection for high-tech industries, including manufacturers of electric cars, chips and artificial intelligence, to dominate various aspects of the EV industry. On the flip side, the US is still relying on enterprises to seek business opportunities and carry out research and development because of its traditional free-market approach in spite of President Biden’s $174 billion EV plan to counter-attack China’s rapid EV growth.

There’s a global consensus that EV development can alleviate greenhouse gas emissions, but the market has increasingly become a proxy war between China and the West. If China can successfully satisfy both commercial EV demands and dominate cutting-edge technologies, it could marginalise the US in this particular market and strengthen its discursive power in the EV and environmental sector. Most importantly, China will further propagate and legitimise its state-run capitalism across the globe as an alternative way to achieve national success. In light of this, China’s EV development does not solely respond to the Paris Agreement but also comes with complicated political calculations to improve its global standing.

However, China’s road to challenge the West is no easy task. In the wake of China advocating for its “Made in China 2025” plan to expand the Chinese manufacturing sector, including EV industrial development, former US President Donald Trump launched several political practices to suppress China’s national ambition. Although China no longer mentions “Made in China 2025”, they still offer enormous subsidies to support cutting-edge industrial development, especially in EV research and development of charging infrastructure. In 2020 alone, the Chinese automobile manufacturers sold over 1.2 million EVs, four times greater than the US, and managed to keep innovating on a daily basis in spite of foreign obstruction practices.

In spite of displaying a persuasive figure with nifty domestically-produced electric vehicle technology, China’s EV global competitiveness remains a question mark. Although China’s EV growth can help achieve climate goals, national subsidies and political protection may weaken national brands’ commercial competitiveness. In 2020, Tesla’s Model 3 was the best-selling battery-powered vehicle in China, and vastly outpaced Chinese models in the global market. What’s more, Tesla founder Elon Musk once accused Chinese automobile manufacturer Xpeng of “stealing” and “copying” Tesla’s core technologies. At this stage, Chinese customers are less willing to purchase a Chinese-made EV as it does not necessarily have the same recognisable reputation as Western automakers, while Chinese car companies have yet to dominate the foreign EV market.

Nevertheless, the Chinese government will try to stimulate NEV sales and reduce its heavy reliance on foreign oil imports due to security concerns. As China’s transportation sector currently accounts for approximately 54% of the country’s oil consumption, the government is worried about a potential national energy shortage should the United States ever enforces a naval blockade and economic sanctions.

China would want to rid itself of that vulnerability and to reduce its reliance on oil imports by adopting NEVs as soon as possible. In a nutshell, China’s actions in fighting against climate change goes hand in hand with national security concerns. The Chinese government is utilising this rare opportunity to gradually slash its reliance on fossil fuels import to not only enhance its national image, but also fulfil its national priorities and expand its manufacturing sector.