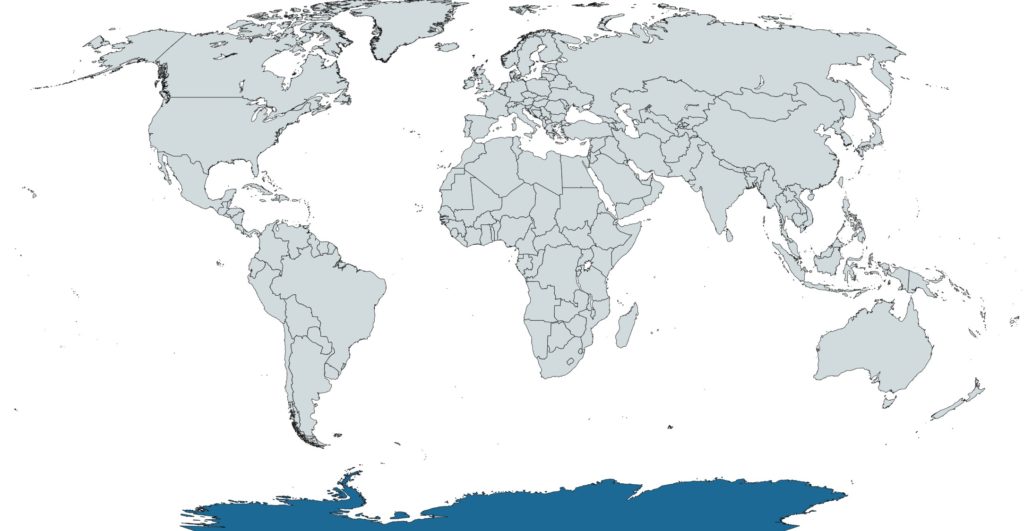 The following is an equivalent of a Country Page for one of the Earth’s ungovernable or incompletely governed areas which can be considered common heritage of humanity. While Antarctica has no government of its own, and thus cannot mandate its own environmental policies, the relationship between the region and a changing climate holds implications for the rest of the world.

Antarctica is Earth’s fifth largest continent, located entirely within the Southern Hemisphere and encompassing the planet’s geographic South Pole. While the continent possesses an ample amount of land, around 98% of it is covered by the Antarctic Ice Sheet, the largest single expanse of ice in the world. Beneath the ice sheet, eastern Antarctica (cardinal directions are not very useful at the poles, so Eastern Antarctica is defined as the portion of the continent that is mostly located within the Eastern hemisphere) is mostly solid land and consists of mountainous terrain, while in western portions of the continent, archipelagos and islands are more common. The eastern ice sheet can be as deep as 2,500m below sea level in some western areas. At its deepest, the Antarctic ice sheet is nearly 4.8km thick, and around 2.2km thick on average.

The 1959 Antarctic Treaty designated the continent as a purely scientific and peace-faring preserve, establishing the freedom of scientific investigation on it, but banning all military activity for as long as the treaty remains in force. Of the original twelve signatories to the treaty, seven countries – Argentina, Australia, Chile, France, New Zealand, Norway and the United Kingdom – possess territorial claims, which sometimes overlap with one another. The territorial claims are divided by longitudinal lines, creating a pie-like circular subdivision of Antarctica. However, these countries do not practice governance within their claimed territory, given the scientific mandate of the Antarctic Treaty. The territorial claims are also not universally recognised, sometimes even by other signatories of the Antarctic Treaty.

Antarctica’s status as a primarily scientific outpost, as well as its poor habitability for humans, means that the preservation of Antarctica’s environment has always been prioritised over interests in exploiting the continent for its resources. The Protocol of Environmental Protection of the Antarctic Treaty of 1991 is the landmark piece of environmental legislation concerning the continent, and designates Antarctica as a “natural reserve, devoted to peace and science.” The protocol established the Committee for Environmental Protection (CEP) as an advisory body that would provide advice and formulate recommendations to the Antarctic Treaty Secretariat and its signatories on good environmental practices.

The protocol is valid until 2048, when it will be subject to further review and possible revisions. It covers the following areas:

Natural capital: Antarctic environmental law bans any activity related to the extraction or exploitation of the continent’s mineral and natural resources that is not exclusively tied to scientific research.

Biodiversity: Antarctica’s flora and fauna remain some of the most insulated species on the planet from human impacts, and the Environmental Protocol aims to keep it that way, mandating that all activities in Antarctica must be conducted so as to avoid “detrimental changes in the distribution, abundance or productivity of species or populations of species of fauna and flora.” To achieve this, the protocol:

Waste Management: Activities conducted in Antarctica must ensure that “the amount of wastes produced or disposed of in the Antarctic Treaty area shall be reduced as far as practicable so as to minimize impacts on the Antarctic environment.” The law grants some allowances insofar that activities are of relative scientific value. Waste management plans in accordance with the protocol must be presented for every entity wishing to enter Antarctica, and some highly pollutant chemicals are outright banned from entry in any circumstance.

Marine Pollution: The Antarctic region encompasses around 20 million km² of ocean, which has been designated a ‘Special Area’ subject to special methods of protection. The protocol specifically:

For as long as the Antarctic Treaty remains valid, the countries that claim territorial sovereignty in Antarctica are required to abide by the terms set out in the Environment Protocol, and practice good stewardship of the environments they inhabit and traverse in their scientific and research pursuits.

Antarctica is home to 70% of the world’s freshwater preserves which are mostly locked away in the Antarctic Ice Sheet, which itself accounts for 90% of the world’s ice. Global temperature rise is currently causing glacial melt in Antarctica to add around half a millimetre to sea levels each year, although this impact has the potential to increase exponentially, if temperatures continue to rise unabated.

One of the most dangerous ‘tipping points’ of climate change, an event that would rapidly increase warming feedback loops and essentially mark a point of no return, is the possible collapse of a portion of the Antarctic Ice Sheet. Antarctica holds enough land ice to raise sea levels by around 60 metres, and emerging research indicates that the threshold for collapse of Antarctica’s massive ice shelves could happen within this century. If this were to happen, sea levels would rise at irreversible rates as much as ten times higher than they would otherwise.

Some of Antarctica’s ice shelves, particularly to the west, are at least partially submerged in seawater. Warming sea temperatures cause the foundations of these shelves to melt away faster, which could lead to a sudden and catastrophic collapse. The Thwaites Glacier, a particularly unstable marine ice shelf around the size of Britain, is being closely monitored by an international consortium of scientists because of these concerns.

If current emissions continue on their current trajectory, the amount of warming and glacial melt in Antarctica would lead to higher and faster rates of sea level rise that will continue well past 2100, if we are to pass one of these climate tipping points. It will be exceedingly difficult to know in advance that we are poised to hit a tipping point, but unless emissions are reduced substantially it is inevitable that this will happen sooner or later.

Even if activity in and around Antarctica is kept to a minimum for now, the continent is still susceptible to the global warming that originates elsewhere on the planet. The sheer amount of ice located in Antarctica, and the implications that warming on the southern continent could have on sea level rise, make Antarctica’s conditions especially relevant to understanding the global impact of climate change.

Antarctica has historically been an unattractive place for non-scientific pursuits. It’s prohibitive climate and weather conditions, ice cover and interminable winter nights have made the continent unappealing to most international interests.

However, as global temperatures warm, the conditions for profitability in Antarctica increase, and with only a set of non-binding legislative frameworks from decades ago to keep countries in check, many of which are set to expire anyway, the pristine environmental conditions of the Antarctic commons may soon be challenged.

Expiring Protections: The primary forms of legislation that protect the Antarctic commons are not designed to last forever, and when they expire, they will become open to revision under very different circumstances than when they were first signed.

A Changing Environment: It might well be that the Antarctic Treaty will persevere in its current form past 2048. No constituent state will put forward an agreeable proposal of review and nothing will change. But in the later half of this century the rest of the world will most probably be contending with the adverse economic consequences of climate change. Under this scenario, the profitable potential ventures in Antarctica may prove too alluring.

These commercial applications of the Antarctic continent are currently banned or restricted by the Antarctic Treaty. Regardless of the Treaty, mining and bioprospecting in Antarctica are currently very difficult due to the climatic and weather conditions that make any sort of activity in the region, much less the transport and infrastructural setup of heavy machinery, virtually impossible and decidedly uneconomical. If nothing else, having to break through kilometres’ worth of ice cover would make the entire enterprise impossible. However, none of this ensures that constituent states will remain disinterested in Antarctic commercial activities, should circumstances change.

In Western Antarctica, where most of the continental shelf lies below sea level, ice sheets are mostly submerged or lie atop water. As has been observed with the Thwaites Glacier, ice cover on water melts much faster than ice covering land. This means that parts of the Western Antarctic lands, islands and archipelagos could be ice-free relatively soon, possibly within the next century. Ice melts exponentially faster the smaller the ice cover is, because each year there is a lower threshold of ‘cold’ temperatures remaining within the ice (this is known as the surface area to volume ratio). And as global temperatures continue to rise, this process might accelerate even more.

These factors, in addition to several other positive feedback loops and tipping points that will contribute to temperature rise, might make parts of Antarctica completely ice-free, and also more or less habitable and open for commercialisation.

Should parts of Antarctica become relatively habitable, and if the Antarctic Treaty is not renewed to preserve the region’s environment, the continent could become an arena for geopolitical and economic competition:

Under these scenarios, Antarctica’s pristine ecosystem will be at serious risk. Under current conditions, such activities are banned or uneconomical, but the potential profitability of the region, combined with climate change and the possibility that existing legal framework restraining commercial activities can be revised, is threatening the permanence of Antarctica’s current state.