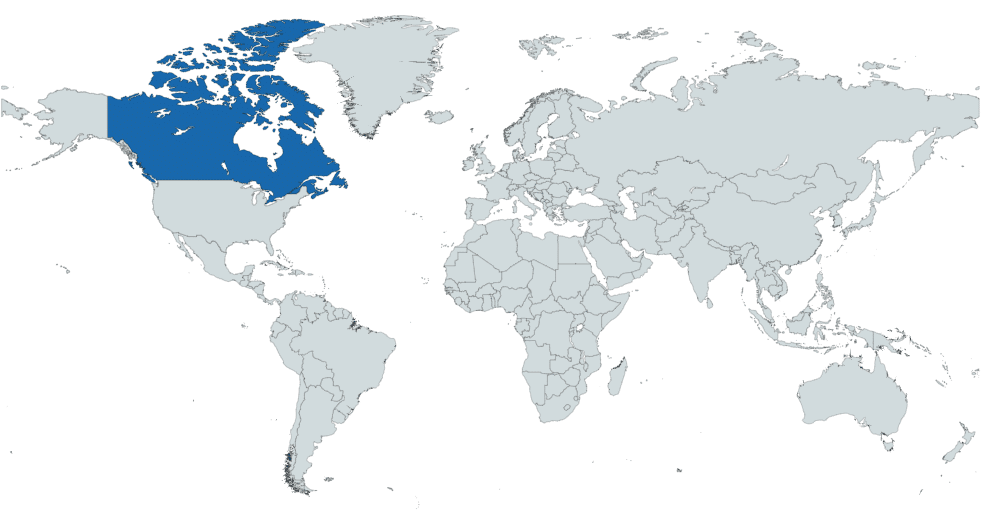 Canada’s original NDC was widely considered insufficient to curb temperature rise considering Canada’s share toward global emissions. Its new NDC puts the counter on a clearer path towards the Paris Agreement’s goals and Canada’s own 2050 carbon neutrality pledge, but the announcement has yet to be accompanied by the policy developments needed to achieve these targets.

Renewable energy in Canada is widely in place, and continues to exhibit fast growth. Currently, hydropower contributes to the largest share of the country’s energy mix by far, complemented by low-carbon sources such as nuclear, but solar and especially wind energy are catching up fast. Some local governments and communities are rapidly scaling up the installation of renewable energy infrastructure, for instance in Prince Edward Island, where wind and solar power already account for 40% of the energy mix. Canada has also been focusing on actively phasing out fossil fuel power plants, with coal use in particular falling aggressively by more than half since 2000, accounting for 7% of the country’s energy mix in 2018.

While Canada has been largely successful in scaling down its own consumption of fossil fuels over the past two decades, the country is still struggling to shift its economy away from a reliance on fossil fuel exports. Canada is one of the world’s largest producers of fossil fuels, and oil, natural gas and other petroleum products remain Canada’s top export, accounting for 19% of the economy’s export volume and worth USD$113 billion. Most of these fossil fuel exports go to developing markets in East and Southeast Asia, although a large portion has historically been directed towards the US as well. Despite the country working to decrease its own reliance on fossil fuels for energy generation, its economy remains beholden to the extraction, production and export of fossil fuels across the world.

Public opinion towards Canada’s reliance on fossil fuel exports is decidedly mixed. While many acknowledge that the government is mainly capitalising on Canada’s most valuable internally produced resource, the construction of pipelines and other fossil fuel transportation infrastructure has elicited widespread protests and public dissent. Canada has stepped up its ambitions with recent announcements, but the country now needs to enshrine its new targets into law, set out detailed policy roadmaps to electrify its economy and, most importantly, aggressively work towards decreasing its reliance on fossil fuel exports.

The ND-GAIN Country Index by the University of Notre Dame summarises a country’s vulnerability to climate change and other global challenges in combination with its readiness to improve resilience. The more vulnerable a country is, the lower their vulnerability score, while the more ready a country is to improve its resilience, the higher its readiness score will be, on a scale between 0 and 1. Canada’s scores are:

Per the World Bank, Canada is particularly vulnerable to flooding, extreme weather events and wildfires. The country is also vulnerable to droughts, extreme temperatures and the spread of virulent diseases. Nevertheless, Canada is regarded to have comparatively high readiness and resilience given its economic wealth.

Canada possesses 158 139 km² of rural land where elevation is below 5 metres. While most inhabited areas and economic hubs are located in southern Canada, coastal states are most at risk because of sea level-rise. By mid-century, sea level-rise and storm surges could cost  over CAD $50 billion. Further inland, Canada is home to several major rivers, lakes and other waterways, most of which are located in the proximity of heavily populated areas and are also prone to flooding. Between 2009 and 2017, severe weather and floods caused CAD $1.8 billion in insurance losses per year.

38% of Canada’s land area is covered by forest, and the country’s economy is in fact heavily dependent on resources extractable from forests. The risk of wildfires is therefore a significant part of Canada’s climate vulnerabilities. Wildfires have been estimated to trigger almost CAD$5 billion in insurance payouts between 2003 and 2017. Since the 1970s, Canada’s wildfire season has also lengthened from five months to seven months due to the higher average temperatures and lower rainfall. Individual wildfires are also projected to increase in duration by more than 50% in western Canada, where wildfire risks are already high.

Some projections have indicated that Canada could conceivably enjoy greater agricultural yields due to warmer temperatures at higher latitudes, longer growing seasons and a higher concentration of carbon in the atmosphere. The agricultural sector, despite accounting for a relatively small 1.6%  of Canada’s total GDP, is still considered to be a key economic contributor to the country’s economy. Canada is ranked as the 5th largest food exporting nation in 2010, and 70% of food purchased in Canadian stores is locally produced. However, economic losses and damage to infrastructure caused by climate change is not included in most projection models. Despite more arable land further north, climate change will bring more destructive impacts in Canada by increasing the frequency and durations of droughts, heatwaves, extreme storms and short bursts of heavy rainfall.

A relatively high share of Canada’s energy mix is composed of renewables. Given the abundance of inland waterways, Canada has invested heavily in its hydroelectric power infrastructure, and around 66%  of renewable energy in the country was in fact hydroelectric in 2017. Although Canada has outperformed most other comparably wealthy countries, ranking as the 6th highest producer of renewable energy, it is still focusing on expanding fossil fuel use. However, the Canadian government is planning on phasing out coal usage by 2030 and reducing oil and gas methane emissions by 40% by 2050.

The government is also striving to scale up the share of  electricity generated by non-emitting sources to 90% by 2030.  Per the Canadian Electricity Association, the share of hydroelectric power will continue to be dominant and the renewable energy sources which currently account for relatively small share are likely to grow collectively in the energy mix. Especially for Solar Energy, the Canadian government has suggested policies to boost the utilisation rate. For instance, all the commercial and institutional buildings with proper roof size are required to install solar panels by 2050.

Canada has a relatively low population density, and population centres are quite widely distributed. These characteristics contribute to the low accessibility of certain areas, and result in less effective transportation. However, transportation is considered key to Canada’s economic growth. Population centres are densely packed along the southern border with the US, and Canada’s transportation network reflects this. In northern Canada, where only about 114,000 people live in 40% of the land in Canada, the transportation network becomes less convenient and more dependent on private vehicles and air transportation. While in the southern area, the network of railway is better connected so that the proportion of people using public transport would be relatively higher. Overall in Canada, people still depend a lot on private vehicles, yet, the younger population is increasingly inclined to use public transportation, contributing to the growth of this sector.

Transportation, a sector sharing a quarter of GHG emission, is one of the underlined aspects for carbon reduction. The Canadian government has set a target of reaching 100% sales of zero emission light-duty cars and passenger trucks by 2040. They plan to invest a total of CUD $437 million over 3 years after 2020 as the Zero-Emission Vehicles (iZEV) incentive. Other than vehicles, some provinces are committed to work on the low-carbon transportation system. For example Vancouver is targeting to have at least two-third of all trips made by foot, bike and transit by 2040 in ways of having detailed land use planning.

In 1995, the Canadian government put forward the National Biodiversity Strategy and Action Plan (NBSAP).  The plan requires the government to research, plan and implement policies that can protect and recover habitats of species considered to be at risk. However, according to the 6th National Report 2018, the progress of terrestrial preservation in Canada is lagging behind it’s 2020 goal of 17% preservation. Nevertheless, the Canadian government announced in 2018 to be inputting CAD$1.3 billion to boost its conservation efforts. According to the national target submitted by Canada in COP 10 National Biodiversity Strategies and Action Plans (2016), there are 19 targets under four goals: to protect ecosystems vital to supporting biodiversity, to reduce pressures on natural resources demand, to educate people about biodiversity conservation, and to engage the public in the conservation.

At the federal level, animal welfare is regulated under the 2008 Criminal Code in Canada. The code has included provisions that prohibit animal cruelty, sexual abuse of animals and forced animal fighting. In addition, the Ending of Captivity of Whales and Dolphins Act, implemented in 2019, complements the loophole of the Criminal Code and Fisheries Act and Wild Animal and Plant Protection and Regulation of International and Interprovincial Trade Act. It outlaws the keeping, capture and breeding of cetaceans for entertainment purposes.  Moreover, the Health of Animals Regulation was amended to reduce the maximum animal transportation time without feeding and drinking in 2019. Although there are protections on animal welfare from suffering, there are no rules guaranteeing the right of animals to experience positive feelings. Moreover, some of the regulations are not at the federal level and there is no specific body for policy enforcement.

Canada has good air quality compared to other countries. The major natural pollution sources are forest fires, volcanoes and volatile organic compounds (VOC) emitted from vegetation. As for sources from human activities, it is similar to most of the developed countries, namely transportation, industry  and power generation. Air pollution is known to generate due to the upswing of population and economy, yet the emission has generally declined due to the government regulation. Since 1999, the government has limited the number of pollutants released  under the Canadian Environmental Protection Act.

Currently, the government is emphasising on clean energy utilisation and green technology development to lower the emission. In the business sector, the government has reduced the income tax rate breaks and invested through some  programs to favour net-zero technologies manufacturers.The investment budget is proposed to be CAD$5 billion by 2022.