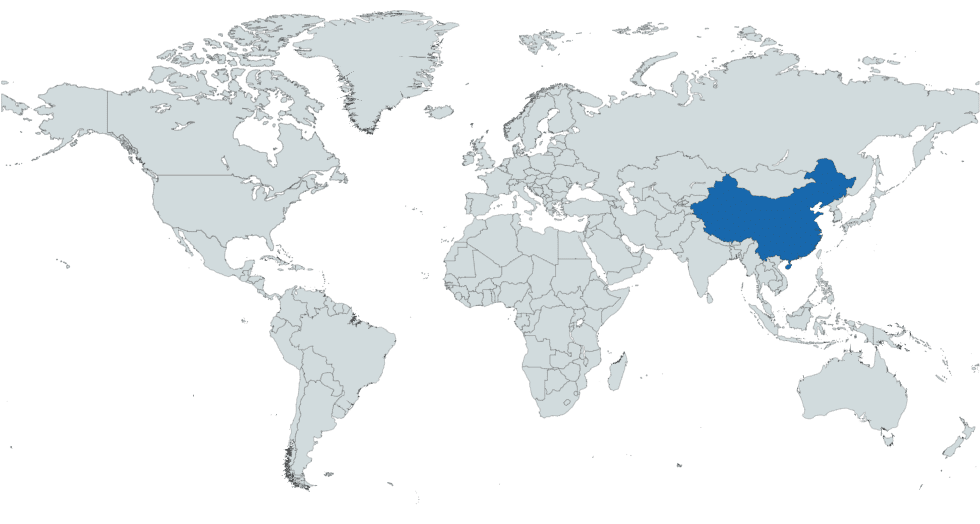 China is the largest current producer of CO2 emissions, largely due to its continued reliance on fossil fuels to meet its energy needs. China is currently the largest producer and consumer of coal in the world, largely due to its large and modernising population which demands that coal and fossil fuels remain a large part of China’s energy mix for the foreseeable future. China’s demographic and economic growth has also spurred a rapid urbanisation rate, contributing to a continuing struggle with ambient air pollution, environmental degradation and food and water safety concerns.

China’s wealth, political capacity for long-term planning and its large and skilled workforce make the country a hotbed for innovation pertaining to clean energy and green technology. It is the country with the highest domestic capacity for renewable energy, and is increasingly in control of global supply chains for essential green technology components including solar panels, wind turbines and lithium ion batteries. The domestic Chinese consumer market is also the largest in the world for electric vehicle sales.

China’s climate pledges are ambitious, but in terms of timelines fall behind the targets of its international rivals, mainly the US and the EU. China argues that because it began industrialising after most advanced economies in the West, it should be held to a different standard, while other high emitters point out that it is essential for China to rapidly curb its emissions due to its current position as the world’s highest producer of GHGs. Additionally, China’s announcements of medium and long-term climate goals have lacked detailed policy changes or roadmaps to achieve these targets.

The ND-GAIN Country Index by the University of Notre Dame summarises a country’s vulnerability to climate change and other global challenges in combination with its readiness to improve resilience. The more vulnerable a country is, the lower their vulnerability score, while the more ready a country is to improve its resilience, the higher its readiness score will be, on a scale between 0 and 1. China’s scores are:

China’s large geographic spread and status as the world’s most populous country makes it vulnerable to several potentially significant climate change impacts. Like most nations of its size, China possesses a wealth of diverse natural landscapes and biomes, rendering its vulnerability to climate change region-dependent, although some common trends in terms of geographic distribution of impacts over the next few decades do exist. Per the World Bank, the main threats related to climate change China is and will be facing in the near future include fluvial and coastal flooding, extreme temperatures, droughts, land subsidence and landslides.

83 907 km² of rural land in China are lower than 5 metres above sea level, the fourth most in the world, making many of the country’s rural and underdeveloped regions highly vulnerable to sea level rise, flooding, inundations and storm surges. South and parts of southeastern China, home to a majority of China’s population and the country’s most populous province Guangdong, are also vulnerable to storm surges given the local prevalence of heavy precipitation during seasonal cyclones, which are expected to increase in intensity due to climate change. The Yangtze River Valley region, home to nearly one-third of China’s population and several major metropolises including Chongqing and Wuhan, is also becoming increasingly vulnerable to catastrophic flooding. Finally, the urbanised and highly developed regions of the Pearl River Delta and the Yangtze River Delta, cumulatively home to as many as nearly 300 million people, are at among the highest risk of flooding and extreme inundation.

Extreme temperatures are expected to threaten livelihoods and human health in most regions of the country, primarily the tropical south and the arid northern and western provinces. In the north and west, increased occurrence and duration of crop-damaging droughts are also expected as a result of climate change and increased water scarcity. These regions are expected to experience greater warming in general. Permanent and chronic heat stress will be increasingly felt by cities with large populations, most importantly Beijing, Shanghai and Guangzhou.

China’s vulnerability to climate change has been reduced substantially in recent years due to the country’s largely successful push to eradicate extreme poverty. However, inequality in China remains perilously high, leaving many people, mostly minorities or disadvantaged groups, more vulnerable to climate change. Additionally, the country’s rapid rate of urbanisation over the past two decades leads to two pressing concerns. First, well over half of the country’s nearly 1.4 billion inhabitants live in coastal provinces to the east or along the Yangtze River Valley, with internal migrants to these wealthy regions increasing every year. These are among the country’s most at-risk areas due to the threat of sea level rise and flooding. Secondly, the rate of urbanisation and development in such a short span of time has allowed for poor infrastructure and lack of consideration for natural hazards, especially for lower income groups.

China is unique in terms of its energy generation patterns. It has the largest installed capacity for renewables of any country in the world, but is also the largest producer and consumer of coal, widely considered the dirtiest fossil fuel in circulation. China’s large population and continuing development in many regions of the country make it difficult for fossil fuels to be phased out immediately, and the government will continue to commission more coal-powered facilities for the next few years at least. However, investment, innovation and interest directed towards wind and solar are all running high, and the energy share of these two sectors are fast catching up to that of hydropower, the main renewable energy source in China. Additionally, China dominates the global market for rare Earth metals, possessing 95% of the world’s minable supply. These materials are essential for the construction of lithium ion batteries, wind turbines and solar panels, placing China at the forefront of production supply chains for renewable energy technologies.

China’s expansive geography has necessitated substantial investments from the government towards expanding its public transportation infrastructure. While most of China’s larger urban spaces, manufacturing hubs and population centres are concentrated in the east and southeast, the country’s rampant economic growth has necessitated an intricate and modern transportation system involving highways, railways and airports in all relevant hubs. For private vehicles, China is the leading producer and holds the largest consumer market for electric vehicles in the world, although a large population and deep inequality allow for record numbers of motor vehicles to appear on the roads of Chinese cities, significantly contributing to the country’s urban air pollution crisis. China’s expansive rail network allows for cheap and rapid transportation of humans and commodities to most areas of the country. However, China has also relied heavily on carbon-intensive domestic air travel to prop up its growth.

Since 2011, the Chinese government has been championing an ‘ecological redline’ initiative that aims to protect more terrestrial land from development, implement and maintain a new robust network of national parks, enable stricter supervision of conservation efforts and streamline the country’s numerous and bureaucratic environmental oversight agencies. Ecological redlining will be a part of the government’s Beautiful China Initiative by 2035, which outlines plans for China to “speed up the construction of an ecological civilisation system and ensure that by 2035 the ecology and environment is fundamentally improved and that our goal of building a beautiful China is basically achieved.

The closest piece of animal welfare legislation in China is the 2005 Animal Husbandry Law of the People’s Republic of China, last amended in 2015. This law, however, only recognises the value of maintaining genetic diversity of livestock and poultry for the purposes of human consumption. Some legislation has been passed that legalises humane slaughter for certain species of livestock.

In terms of conservation, China has taken important steps towards regulating the illicit trade of rare wildlife. Several pieces of new legislation were introduced in 2020 following the initial outbreak of the COVID-19 pandemic, which many experts have attributed to a zoonotic spillover event resulting from the consumption and trade of captive wild animals in China. However, most conservation legislation and efforts only address species protection, which allows for individual wild animals under state protection to still be consumed and traded for certain legally permitted purposes.

Over the past decade, the Chinese government has made reducing ambient air pollution in cities a key part of its domestic policy. This has occurred in response to citizens’ increasing concern over air pollution as a public health crisis. The 2015 Law on Prevention and Control of Air Pollution is the primary law dealing with air pollution in China, and provides comprehensive measures on air pollution prevention and regulation. The government has also implemented several air quality requirements and environmental taxes for polluting industrial facilities, as well as a series of vehicle emissions and fuel efficiency standards modelled on similar policies in the EU. These standards are also intended as an incentive to develop China’s electric vehicle market.

However, as long as China relies on fossil fuels as a major part of its energy needs, pollution of the air, water and soil will continue to represent an unresolved challenge. Additionally, because China’s large population is becoming increasingly globalised and urban, consumption and personal waste generation is increasing. While waste generation per capita remains below the levels present in more mature economies, the data clearly indicates an upward trend for the foreseeable future. In 2017, the government announced legislation that would create a standardised system of sorting waste in 46 large cities, including plans for the city of Shanghai to be recycling 35% of their waste by 2020.