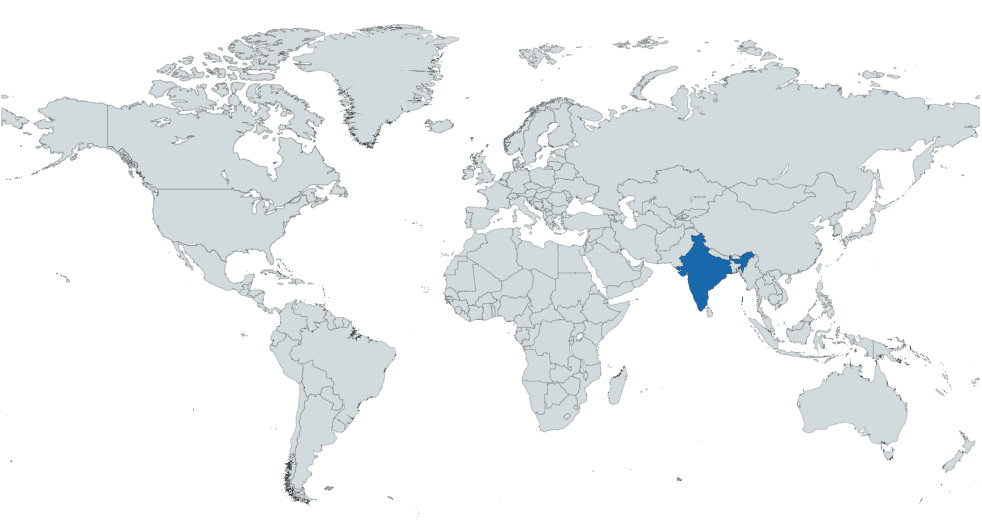 As the third-highest global emitter of GHGs, and with a large and growing population, India has an important role to play. As a developing economy, India remains overly reliant on fossil fuels, particularly coal, which continues to receive substantial government support. Subsidies and concessions for coal are high, and hinder any substantial development of India’s renewable energy sector. While coal production experienced a significant slowdown in 2020, it is expected to rebound to record highs in 2021.

However, renewable energy capacity in India is still growing, with a target to receive 450GW worth of energy from renewable energy sources in 2030. Solar energy in particular is receiving higher and higher amounts of investments, and is providing for larger shares of the energy demand of India’s agricultural sector in particular. The government has also announced policy plans and targets to invest higher sums towards the electrification of its transportation sector, for instance a 2030 goal to achieve 100% zero-carbon country-wide railway service. There is growing discussion in India surrounding the potential for a green recovery plan, as public health issues such as severe ambient air pollution become increasing concerns.

India is one of the few high-emitting countries poised to meet its Paris Agreement target and current NDC, and in fact may even exceed its emissions reduction and renewable energy expansion goals, although the government has been criticised for adopting a target perceived as unambitious. There is still substantial room for India to improve its commitments and cut its political ties to the fossil fuel industry. Given that it is on course to meet and exceed its original target, India is increasingly expected to announce a more ambitious NDC before COP26, accompanied by detailed policy roadmaps and a mid-century carbon neutrality pledge, which the country is notably still lacking.

The ND-GAIN Country Index by the University of Notre Dame summarises a country’s vulnerability to climate change and other global challenges in combination with its readiness to improve resilience. The more vulnerable a country is, the lower their vulnerability score, while the more ready a country is to improve its resilience, the higher its readiness score will be, on a scale between 0 and 1. India’s scores are:

India is the world’s seventh-largest country with the second-highest population of 1.3 billion people. Per the World Bank, climate change will primarily be felt through floods, storms, high temperatures, landslides and epidemics. The country’s developing economy status means that India’s social, government, and financial institutions may not be solid enough to withstand climate destruction. The India Population Council has conducted research, revealing that 25% of all accidental deaths during 2001-14 are attributed to extreme weather events.

Since the growth rate of non-farm positions is far lagging behind the population growth, 58% of India’s population is employed within the agricultural sector. Because of climate change, the rainy season in India is becoming shorter, but much more intense. However, the drainage system in India is unable to withstand such a massive water load within a short duration. It is estimated that the floods in Assam in 2010 has contributed to the soaking of 265,000 hectares of cropland and loss of the means of livelihood for thousands of farmers. Across the country, it is estimated that there are about USD $58.7 billion in losses from flooding from 1980 to 2017. Coastal regions with low economic activity and relatively low resilience are also under threat from sea level-rise. Southern Indian provinces bordering the Indian Ocean are home to around 200 million people, and could be entirely submerged by 2100.

India is particularly vulnerable to heatwaves. Per a 2020 McKinsey report, by 2050 India could be one of the first countries to experience frequent heatwaves that would exceed the survivability threshold for healthy human beings. In 2017, about 50% of the GDP in India was generated by jobs exposed to high temperatures. If temperatures continue to rise, outdoor labour productivity will shrink substantially, to the point that GDP could fall by 2.5 to 4.5% of GDP every year.

Because of its high proportion of residents living below the poverty line, eastern India is projected to be the most vulnerable region to climate change. The infrastructure, urban planning and medical system in eastern India are far below standard, contributing to the country’s low climate resilience and readiness. When there is an epidemic outbreak, citizens in eastern states can encounter difficulties accessing proper medical care since the number of healthcare workers is low and only a tiny proportion of them are doctors.

Though India’s total energy consumption per capita is relatively low, with only 6924 kWh used per capita in 2019, renewable energy has made up a large part of its energy composition. Projected to grow exponentially over the coming years, the renewable energy market in India was ranked as the 3rd most attractive market in 2019 on the Renewable Energy Country Attractiveness Index (RECAI). The Indian government has put forward strategies to attract capital and technology, such as the “Make in India” initiative launched in 2014 to encourage global companies to manufacture solar PV, charging infrastructure, and other advanced technologies. The Indian government has set an ambitious goal of 9% annual growth of clean energy penetration across the economy, and to have about 40% of its 2030 energy mix powered by zero or low-carbon sources.

However, India has yet to take decisive actions in eliminating coal, the dirtiest fossil fuel, from its energy mix. In 2021, India was still ranked as the second largest coal consumer behind China. And despite investments and incentives being directed towards renewable energy expansion, India’s coal capacity is continuing to expand, and is predicted to grow from 201 GW in 2019 to 238 GW by 2027.

As India’s population has experienced rapid growth, the demand for fast and cheap transportation has skyrocketed, both within urban areas as well as between different regions. However, the rate of infrastructure development has somehow lagged behind the growth in demand. Railway networks in India are not well developed, especially in more remote, rural areas, forcing people to rely mainly on private transport such as bicycles and motorcycles and buses.

In urban areas, where 31.2% of citizens were living by 2011, private vehicles are so numerous that driving speeds largely stay within the range of 17-23km per hour during the peak hours. In addition to traffic congestion, the large number of private vehicles have exacerbated problems related to air pollution and GHG emissions in Indian cities, well known for having significant and unhealthy levels of pollution.. The road transportation sector alone accounted for 90% of India’s total transportation emission in 2018. Consequently, the Indian government launched a Faster Adoption and Manufacturing of Hybrid and EV (FAME) scheme in 2015 to promote and subsidise the costs of electric vehicles, with a goal to be selling 100% electric cars domestically by 2030.

India’s rural areas, which are home to 70% of the population, contain about 70% of the country’s roads. However, around 33% of rural villages are not connected with all-weather accessible roads as of 2011. The Indian government has introduced some initiatives to enhance the connectivity of the rural area. For instance, the Pradhan Mantri Gram Parivahan Yojana Initiative was launched in 2016 to subsidise public transport utilisation, and another initiative known as UDAN was launched in 2017 to provide low-cost infrastructure and connectivity in underserved areas.

In 2002, India launched the Biological Diversity Act and laid down the Biological Diversity Rules in 2004. The rule is executed by The National Biodiversity Authority to regulate and monitor the status of India’s biodiversity and ecological health. However, despite the presence of laws and regulations, enforcement has been lax, since nearly half of India’s land has been cultivated or is being used for economic development purposes, and it is estimated that about 10% of the species are under threat of extinction due to habitat loss.

The Prevention of Cruelty to Animals Act was implemented in 1960, laying the groundwork for animal welfare in India. Animal consciousness was recognised in the act, which stipulated that all animals can suffer physically and mentally. The act is in line with the value of ‘ahimsa’ in India, which requires all Indians to have compassion for living creatures. Since 2017, the Indian government has also prohibited some forms of entertainment and fur markets which involve wild animal trade.

While efforts have been made to protect animal rights and legally recognise animal sentience, many holes remain in existing legislation. Testing on animals for scientific research remains exempt from the 1960 act, and there is no regulation addressing the rights of farm animals. It also remains legal to kill animals for religious purposes without prior stunning or humane treatment. There is also a lack of existing regulations or enforcements that prohibit people from capturing endangered species in the wild to keep in zoos or public exhibitions.

The air quality of India is far below that deemed acceptable by international health standards. 21 of the world’s 30 most populated cities in 2019 were located in India. Industry in India is responsible for over half of air pollution, followed by vehicles (27%), crop burning (17%) and domestic cooking (7%). It is estimated that air pollution has led to 1.7 million direct and indirect deaths in India, and incurred up to 1.4% GDP loss in 2019. The most significant sources of pollution in urban areas are industry and vehicles. In rural areas, pollution is mainly generated from burning organic matter since energy grids in these areas are largely inefficient, and electricity is scarce.

In 2019, India joined the Climate & Clean Air Coalition (CCAC) and promised to work with Coalition countries to adopt cleaner energy generation practices. India is beginning to implement stricter emission standards for vehicles manufactured after 2020, and is aiming to electrify 30% of the country’s road transportation by 2030. In response to domestic pollution, the Indian government aims to increase the accessibility and affordability of clean energy, expecting to reduce the usage of traditional biomass to a share of 25% by 2040, which would reduce the rates of indoor, unhealthy particulate matter exposure by 40%.