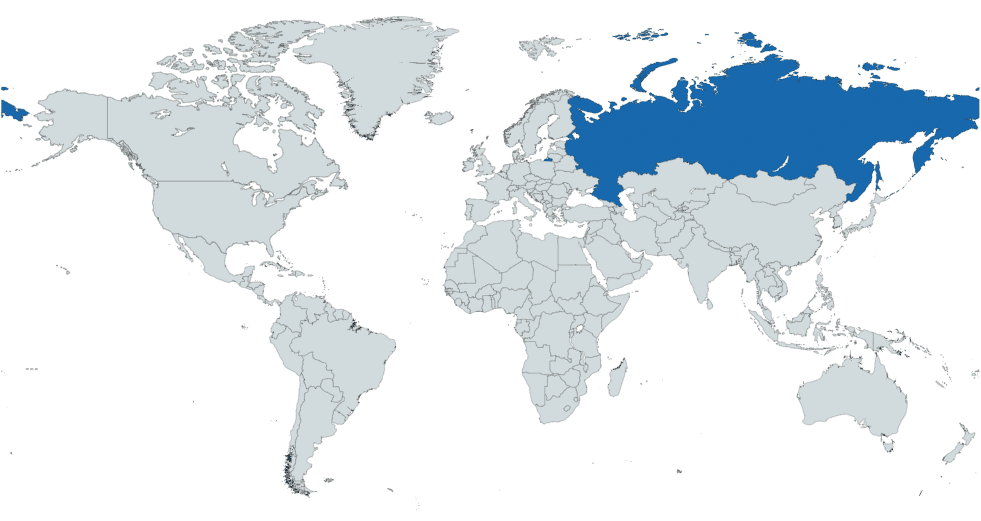 Considering Russia’s size, wealth and geopolitical ambitions, the country has been persistently resistant in implementing actionable environmental policies and measures to reduce emissions. While the country’s leaders have historically been largely static in responding to climate change and environmental degradation, some policymakers have realised the heavy toll that climate change will incur on Russian soil, and some signs of action are beginning to emerge.

Russia’s NDC has been widely seen as insufficient, mostly because of the wide range of acceptable reduction outcomes, between 30 and 70%. Given Russia’s staticity in implementing climate policies and expanding renewable energy use, the country may be inclined to lean more towards the lower end of that range, which would be critically incompatible with the Paris Agreement’s goals. Russia has little to gain economically from the global transition to clean energy, because of the important role natural gas plays in the country’s export revenues. Russia has attempted to circumvent or legally admonish more stringent climate policies in foreign markets, such as Europe which is in the process of implementing a carbon border adjustment tax, in the hope that natural gas exports can survive the transition for as long as possible.

Domestically, Russia is also reliant on natural gas, which provides for over half of the country’s energy needs. Russia is far behind other countries in renewable energy capacity, despite relatively high potential for wind, solar and hydropower. The government has touted and implemented policies that would support the expansion of carbon capture and storage technology, although it is unclear to what extent this would be to the end of prolonging the lifeline of its fossil fuel infrastructure.

At the April 2021 Leaders’ Climate Summit convened by US President Joe Biden, Russian President Vladimir Putin expressed ‘genuine interest’ in international collaboration to counter the climate crisis. However, until Russia announces actionable policy that demonstrates its intention to definitively shift away from fossil fuels, international skepticism over the veracity of these claims will continue to circulate.

When measured by land area, Russia is the largest country in the world and the 9th most populated. It spans eleven time zones and borders fourteen countries, with most of its population living in the urbanised west. The World Bank points out that the size and diversity of land biomes alone make Russia particularly vulnerable to global heating.

According to the Centre for Strategic and International Studies, Russia is warming 2.5 times faster than the rest of the world. Russia’s rising temperatures increase the likelihood of heatwaves, floods, fires, and droughts. Its coastal towns and cities, particularly those near the Arctic, are seeing a dramatic rise in sea levels. A hotter climate also accelerates thawing permafrost, which covers an estimated 65% of Russian territory, releasing high amounts of greenhouse gases and adding to worsening pollution levels.

Undoubtedly Russia’s most vulnerable yet valuable region, the Arctic is home to just 1.5% of the population yet is responsible for 10% of Russian GDP. A pressing concern for the Russian government is that melting permafrost in the Arctic will eventually make the ground too weak to support certain infrastructure, such as nuclear stations, roads and buildings, radioactive waste storage areas, and energy networks and pipelines. Further erosion of the ground could lead to the complete failure to support infrastructures which in turn would have disastrous effects on the surrounding environment and its inhabitants. According to The Arctic Institute, there have already been 35,000 incidents on major oil and gas pipelines in Western Siberia. Scientists predict that by the mid 21st century, permafrost thaw will seriously affect 39% of critical and industrial structures (this percentage excludes residential buildings) representing over $80 billion in economic losses.

According to YaleEnvironment360, 60 billion tons of methane and 560 billion tons of organic carbon are stored in the Arctic’s submarine permafrost – this is permafrost that lies below the ocean floor. The gradual release of methane into the atmosphere contributes significantly to climate warming. As Russia’s climate warms, summer months become hotter and wildfires grow more regular – this is especially true in Siberian forests. These wildfires not only release large amounts of greenhouse gasses into the atmosphere, but they also contribute to the depletion of Russia’s Boreal forests. These forests make up 29% of the globe’s total forest area and play a huge role in absorbing Earth’s carbon emissions.

As more countries turn to renewable energy sources and demand for natural gas depletes, the Russian government stands to lose significant annual revenue, given its economic reliance on natural gas exports. Regardless of the apparent pressure from fellow nations to work towards a zero net energy approach, Vladimir Putin continues to openly dispute the validity behind climate warmings. His partial acknowledgement of global warming tends to favour the perceived benefits of warmer global temperatures – more flexible Northern Sea navigation routes and expansion in arable land. These benefits are short-lived however – warmer temperatures in the North do not necessarily translate into more fertile land, as it will take several years before the region becomes fully cultivable. Similarly, the developing relationship between the Chinese and Russian governments has seen significant investments from Chinese companies in eastern Russian farmland. As Russian land becomes more arable, migration from northern China becomes more likely. Increased migration could likely put a strain on resources in the region and further brewing tensions between Chinese and Russian farmers.

Russia houses the world’s largest natural gas reserves, making up 24.3% of global shares. As of early 2018, 63.9% of Russia’s export revenue came from energy, with petroleum and coal being the country’s most significant exports. Crude petroleum, by far Russia’s largest export, generates $123 billion annually. Domestically, natural gas consumption is also growing, with 444.3 billion cubic meters consumed in 2019. Natural gas penetration rates continue to rise, increasing from 64.4% in 2012 to 70.1% in 2019.

With only 3% of Russia’s energy derived from renewables, fossil fuels make up most of Russia’s energy supply: 52% gas, 22% oil, and 16% coal. The Russian Federation also relies on nuclear energy for 7%  of its total energy supply. Nuclear energy production is only slightly cleaner than fossil fuels, generating radioactive waste instead of greenhouse gasses. The lack of renewable energy usage means the Russian Federation is consistently viewed as an outlier among other superpowers that are investing into energy transitions. In attempts to decrease the global carbon footprint and coerce Russia into more decisive action, the EU has introduced a carbon border adjustment tax that will price imports from countries with low environmental standards. This tax is intended to directly incentivise states like Russia to reduce their emissions. As the EU’s largest supplier of carbon-intensive productions, this taxation could cost Russia roughly $60 billion between 2022 and 2030.

Russian road infrastructure is highly underfunded, resulting in 30% of public bridges and overpasses deemed to be in unsatisfactory technical condition. Over the last twenty years, public road growth has been minimal, seeing a slight length increase in federal roads partnered with a decrease in regional road pathways.  The country’s road network is still primarily centred around major ports and cities, so railway networks and airways remain Russia’s most reliable mode of transportation.

From 2015 to 2017, transportation emissions actually increased, surpassing 103 million tons of CO2. Electric vehicle usage, which aims to decrease greenhouse emissions, has been slow growing in Russian cities. However, Mosgortrans, a Moscow based electric transportation company has agreed to fully transition Moscow’s bus fleet to electric-only-vehicles by 2030. Additionally, as of 2019, over half of Russia’s railway network has been electrified with expected growth over the next several years. Russian cities are notorious for heavy vehicle traffic and congestion –  growing railway networks along with electrification of transportation modes aim to significantly lower CO2 emissions.

Russia’s biodiversity is currently one of the richest on the planet. The country occupies an extensive acreage of natural forest and contains the world’s most extensive wetland system. The majority of Russia’s population is urbanised, with 74.75% of people living in cities across the country, mostly in western cities. While over 60% of the Russian dominion has yet to be impacted by human presence, frequent oil drilling, logging, and fires have resulted in the annual loss of roughly 1 to 2.1 million hectares of forest. Currently, 11.45% of the land area is federally protected, while only 2.24% of marine and coastal areas are covered.

The Russian Federation has made some efforts to preserve its natural land. The country has 40 national parks and 101 federal reserves. Additionally, between 2001 and 2012, reforestation gained an average of 196 thousand hectares. With rapid global warming, however, there is a fear that more people will migrate north as regions near the Arctic become more liveable. This migration could have dire impacts on the biodiversity in the area.

The Russian government maintains that its vast reserves of relatively untouched wilderness in Siberia are a critical natural carbon sink to store the world’s emissions, and Russia should therefore be granted some allowances in its extraction, production and consumption of fossil fuels. However, while Siberia’s forests do act as an immense carbon repository, their status as a natural carbon sink mean that climate models and global net-zero targets already account for their effect. Observers have denounced Russia’s comments as political grandstanding as the preservation of Siberia’s wilderness is inconsequential to Russia’s need to decarbonise, and given that the increased vulnerability of the forests due to climate change is threatening their ability to naturally sequester carbon.

Russia is home to 154 endangered species including the critically endangered Amur Leopard. As of 2007 only 30 were located in the wild. The Russian Government has made minimal progress in the development of animal welfare laws. The Russian Government continues to use animals for cosmetic and scientific experimentation, and guidelines on the handling and transportation of farm animals do little to protect animals from unsanitary and unsafe conditions. In 2018, Vladimir Putin signed a bill on Responsible Handling of Animals, which advocates for humane treatment of animals and fines offenders up to 80,000 roubles. This bill, however, does not include farm animals nor animals killed while hunting. Currently, there are no laws in place that protect the welfare of these groups of animals. Similarly, as of 2018, petting zoos and animal fights have been banned.

Russia is the world’s largest country – amassing over 17 million square kilometres. Its average air quality index is rated 38, which places it in the ‘good’ category. However, in its more densely populated and industrial areas, Russia’s air quality is becoming a growing concern. Chemical and mining industries play a critical role in Russia’s increasing pollution levels. In Norilsk, Russia’s most polluted city, the nickel and palladium mining company is the main contributor to the city’s astronomical atmospheric pollution levels (ten times higher than the Russian average). Additionally, local authorities and government do a poor job of educating the public on poor air quality. According to IQAir, as of 2021, air pollution has been responsible for 5,000 deaths in Moscow annually.

The Russian Government has taken some initiative to improve its air quality. In 2014, Russia’s chemical industry capital, Dzershinsk, was removed from the Environmental Ministry’s ‘Thirty Most Polluted Cities’ chart. To reduce vehicle emissions, cities like St. Petersburg have implemented electrified public transportation systems, and Moscow has introduced roughly 80 electric vehicle charging stations. Vehicle ownership is a highly sought-after commodity in Russia, posing an even more significant issue to air pollution levels. However, there is a growing demand for larger pedestrian areas, cycle routes, and eco-friendly transportation methods.