2021: The Year That Could Save or Kill the Vaquita

Vaquitas are a rare type of cetacean found off the coast of Mexico that often illegal fishing has nearly driven to extinction. 2021 has been announced a critical year for the animal, as their existence hangs on to whether we make decisive push for their sake.

In 2019, Richard Ladkani released the stressful but inspiring documentary Sea of Shadows, which enlightened audiences to the plight of the vaquita. It revealed just how dire the vaquita’s situation was, and the monetary causes fuelling its endangerment. At the time, there were an estimated 19 individuals left, and the film stressed just how key the next year was going to be in the vaquita’s survival. What has happened since?

The vaquita is a small porpoise endemic to the Sea of Cortez in the Upper Gulf of California in Mexico. It is estimated that there are now fewer than 10 vaquitas left, with a total population decline of 98.6% since 2011. 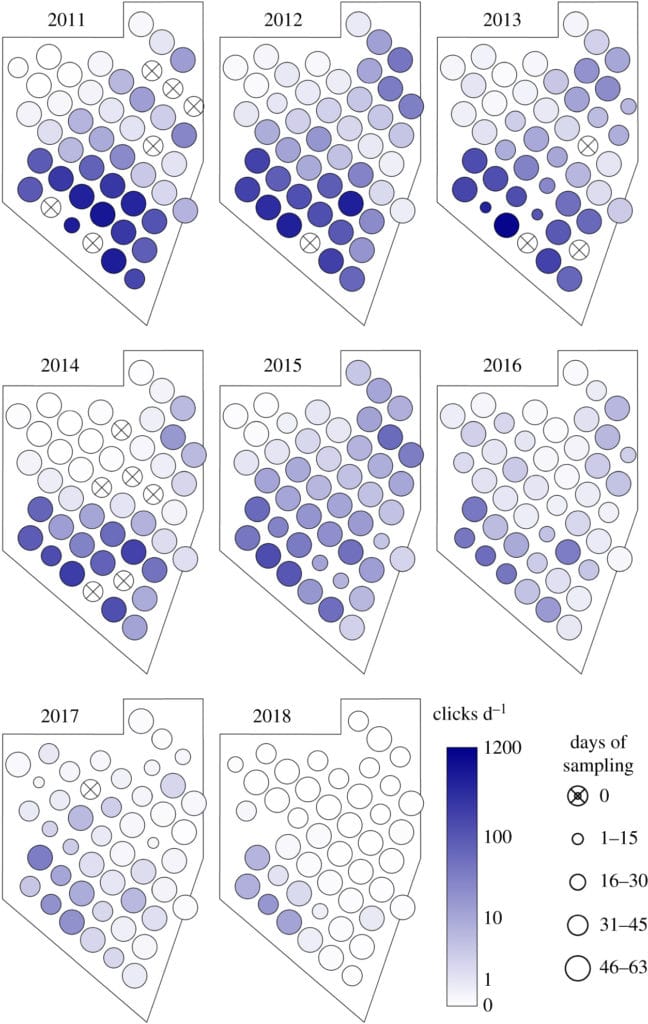 From Jaramillo-Legoretta et al. (2020). Vaquita population decline over time. Number of individuals estimated based on recorded click sounds (their method of communication). Circle sizes indicate duration of sampling in days, color is the number of clicks recorded.

They are the unfortunate victims of the totoaba swim bladder trade. The totoaba is a critically endangered fish whose swim bladders are sold primarily in China for their medicinal purposes, despite there being no scientific evidence to back up its purported virtues. These bladders have been dubbed the “cocaine of the sea” and can fetch up to $46,000 USD per kilo on the black market. They are caught in gillnets, or “walls of death”, which is a curtain of netting that hangs in water and catches anything and everything that gets caught up in it, including vaquitas, who can get tangled up and drowned.

In an attempt to save both the vaquita and totoaba, the Mexican government permanently banned gillnet fishing in 2017. But this ban is hard to enforce and gillnet fishing remains a very common practice. Sea Shepherd, working with the Mexican government, have successfully removed over 1,200 illegal gillnets from the habitat since 2015, and have attempted to ward off illegal fishermen. But saving the vaquita will require a crackdown on the illegal totoaba swim bladder trade, and this will need effective law enforcement, but also support for local people who rely on fishing for their livelihood.

In 2015, the Mexican government began paying fishermen from the nearby fishing town, San Felipe, to halt activities whilst vaquita populations recovered. However, the situation did not improve and the compensation ended by 2018, which has only forced more local people, with few other options to earn a living, to resort to illegal fishing. The US has now expanded a law that bans the importation of any seafood captured in that area, which only encouraged more illegal activity. Crackdowns against illegal traders have yield results, which is encouraging for biodiversity health, yet leaves people in the area with little.

The Chinese government has also increased their involvement in recent years. Since 2015, 300 million yuan worth of contraband has been seized. Enforcement on the demand side could make a huge difference to the trade – when 444 kg of swim bladders worth $26 million were confiscated by China in October 2018, the totoaba swim bladder trade instantly plummeted. However, sources have said that it is still incredibly easy to buy totoaba swim bladders in China.

Although there are improvements, this next year will be crucial to determining the survival of the vaquita and it is kicking off with bad news. In January 2021, there was a collision between a Sea Shepherd boat and a smaller panga fishing boat. One fisherman, Mario Garcia Toledo, died. Sea Shepherd maintains they were deliberately attacked, and the man’s family maintains his boat was intentionally rammed. Rising tension between Sea Shepherd and local fishermen, put a lot of pressure on the Mexican government to provide support. They are now considering reducing the protected vaquita area, which would allow more gillnet use and worsen things again. With Sea Shepherd gone, observers have claimed that illegal gillnets are being blatantly placed in the water, with buoys clearly labelling them.

Amidst the turmoil, a new study has investigated the genetics of the vaquita and says there is still hope for the species. Usually, small populations can be at risk of being “doomed to extinction”, due to loss of genetic diversity and inbreeding. However, the study suggests that the Vaquita has survived in small population numbers for at least 250,000 years, having reached “genetic equilibrium”, with less diversity than any other known mammal, yet a perfectly healthy genepool. In 2019, three healthy calves were spotted, a sign that the population can and will recover if given the respite it needs. If Sea Shepherd and local authorities come together on the issue, we could save a unique and beautiful species from imminent extinction.

This article was written by Cara Burke.