Africa: Growth and Potential for A Sustainable Future

The African population is expected to nearly double from 1.3 to 2.5 billion by 2050. Logically, this comes with a proportional amount of urban expansion, economic development and the implied growth in emissions. While the continent’s influence on climate change will only really kick in during the second half of the century, it could still offset the world’s decarbonization efforts. How can Africa avoid following the same path as past developing continents and steer toward a sustainable future?

Africa’s population profile is young, and experiencing rapid growth – so rapid that half of the additional world population between now and 2050 will come from the cradle of humanity.

Already set to become more populous than China or India by 2023, it is also the world’s biggest urbanization hotspot. An estimated 187 million Africans will move to big cities in the next decade, which will have to be expanded by ten times the size of Cairo to accommodate the influx. 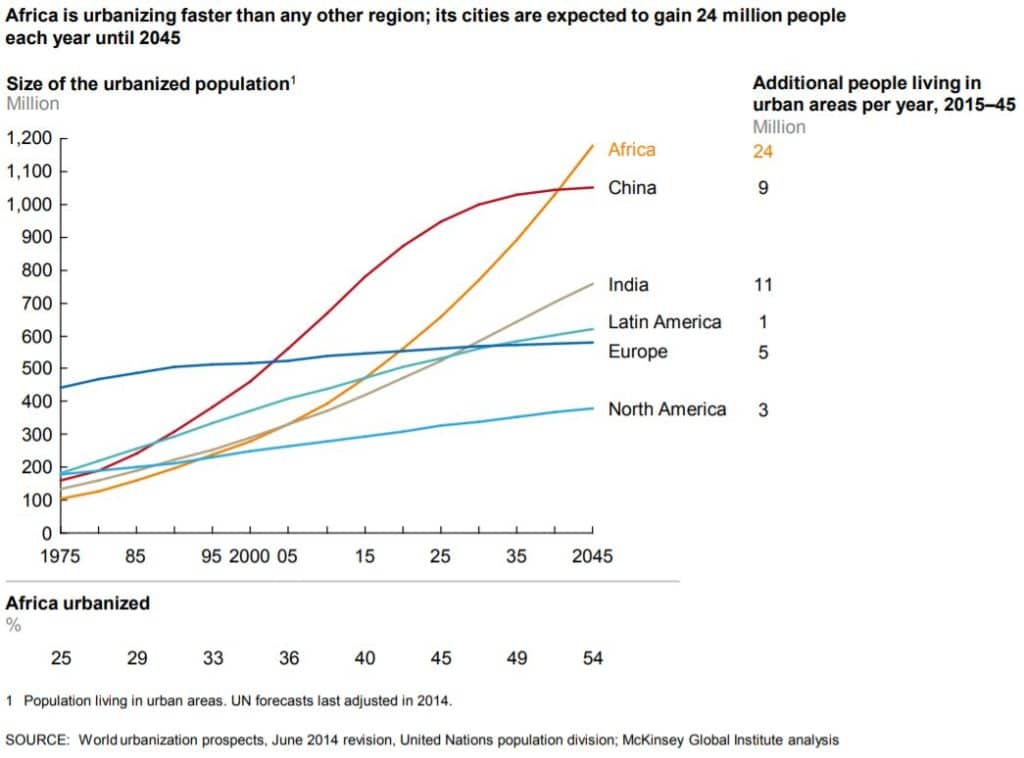 Africa is, hence, emerging as a major consumer in the global non-renewable energy market (like oil and gas). Growing urban population means rising energy demands for industrial production, cooling and transport. Meeting demands means greenhouse gas generation as a by-product. A report conducted by the EU Science Hub in 2019 estimated the resulting emissions, based on the fuel demand projections under three scenarios.

The two mitigation scenarios are based on the countries’ effort in meeting their emission targets assumed in the Paris Agreement, which is keeping the rise of global temperature under 2.0°C and 1.5°C scenarios. This would require an 11% and 27% reduction in energy consumption respectively, compared to the Reference scenario.

approximately 27% from 2050 to 2065; and fossil fuel sources would account for 61%-65% of the overall energy generation throughout the years. 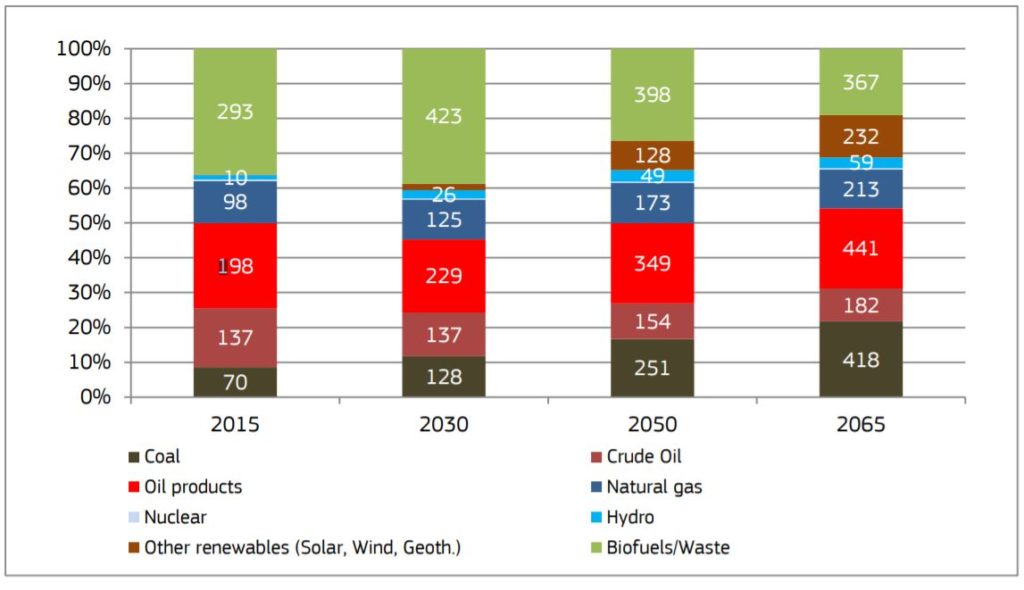 Without a concerted effort to divert from fossil fuels (usually the cheapest option), the continent’s emissions could double by 2065, possibly offsetting much of the decarbonization occurring throughout the rest of the globe. The key to sustainable development will be the introduction of emission caps and renewable infrastructure. 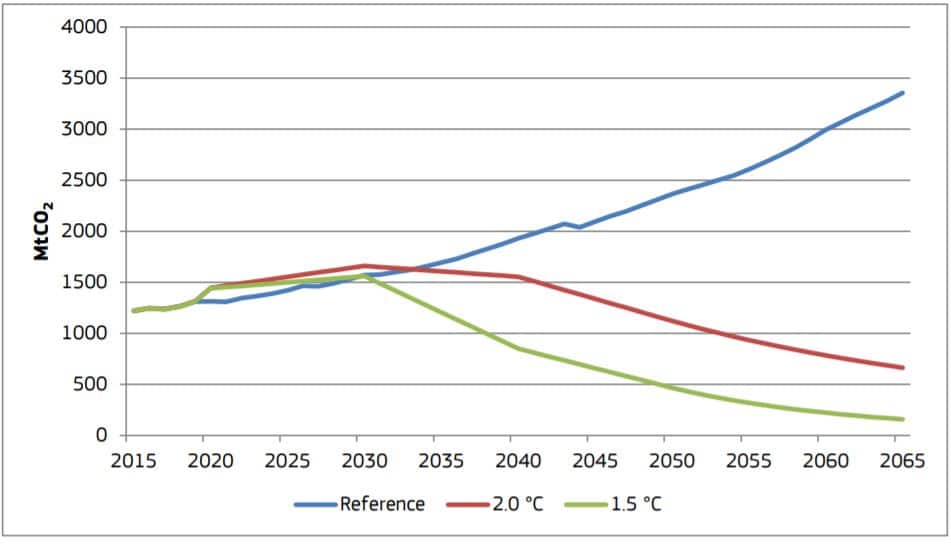 Such legislation would be introduced under the State Policies scenario, and would result in a 1% increase in Africa’s contribution to global CO2 emissions by 2040.

This would be thanks to an offset through the reduction of other types of GHGs that result from poor industrial and environmental practices. Further, the falling cost of renewables coupled with growing foreign investment will help build up the necessary infrastructure for a transition toward clean energy.

African countries are bestowed with a huge, mostly untapped, renewable energy potential. The continent’s power generation potential estimates are 350 GW for hydroelectric, 110 GW for wind, 15 GW for geothermal and a staggering 1000 GW for solar. However, an infrastructure of proportional size and all of its environmental change will be needed to tap into these reserves.

According to the 2040 Africa Case, a scenario built on the premise of the continent’s development vision in the IEA report,

In a 2040 outlook report for the African continent, the IEA predicts solar deployment to overtake all other forms of renewable energy thanks to its ubiquitous installment potential.

Wind would also expand rapidly in several countries that benefit from optimal conditions. 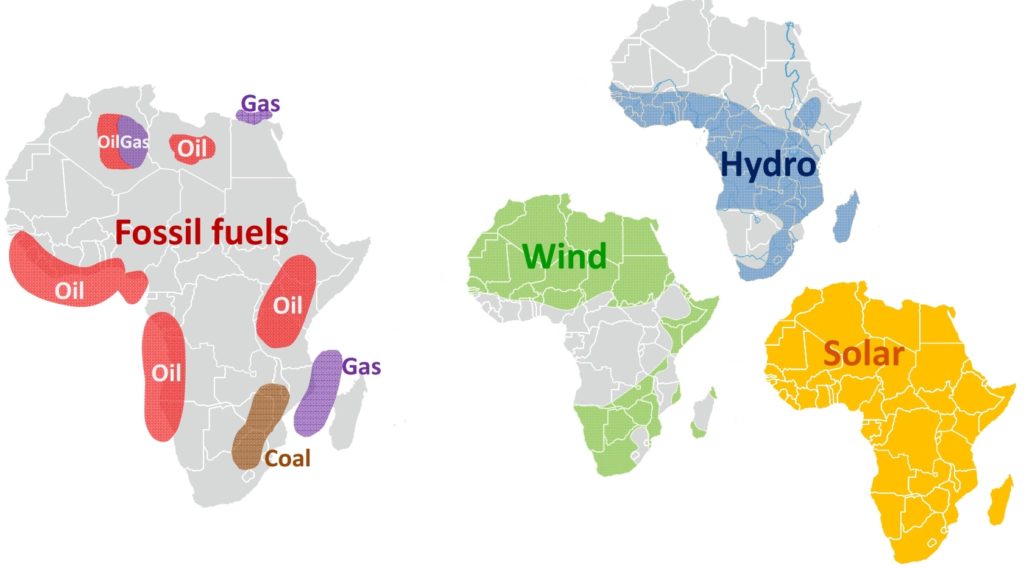 As a result, the current oil and gas-dominated African energy profile will shift to a 50-50 split between fossil fuels and renewables by 2040, pushed further to around 35-75 in an ideal scenario.

The sheer size of Africa and its population make its future development of high concern to the rest of the world, and we would be wise to do our best to guide it in the right direction. This means setting the right example first, and helping wherever possible next. Africa’s future will be representative of our chosen pathway as a species.