We often hear about future increases in global mean surface temperature (GMST), but the climate is a complex system, and there is a lot of variability depending on one’s location. A recent study by Suarez-Gutierrez et al. (2020), modelled the most extreme temperatures that could occur around the globe in different scenarios.

On a geological scale, our climate is changing extremely fast. Records are broken every year, be it the worst wildfire season in the last hundred years or the highest summer temperatures the arctic has ever experienced. Worse, the effects of today’s emissions will only be felt forty to fifty years from now, which could easily take us to 2°C above pre-industrial levels, and maybe more. We’ve reached the 1°C mark and the knock-on effects already reverberate around the world. Pollinators are disappearing, extreme weather is expanding its range and intensity, and parts of the biosphere are struggling to adapt to excessive heat.

Population levels and concurrent land use for agriculture continue to increase at the expense of animal habitats. Meanwhile, crops and livestock become vulnerable to the growing frequency of freak weather events, thus putting our food security at risk.

In this series, we analyze how the worst summer heat spikes could affect agriculture in the future, using the MPI-GE model as demonstrated by Dr. Suarez-Gutierrez et al. (2020). The current article will take the reader to France, whose famous cheese and wine industries could suffer greatly.

Milk yields follow a seasonal pattern with high yields in Spring and low yields shortly after summer. Elevated temperatures are a driving factor of low yields reflecting the impacts of heat stress on cattle. The general reasoning is a divergence of energy and protein production toward heat tolerance (Collier et al. 2012).

Without delving too deep, this is because milk production generates a lot of heat, making cattle vulnerable to excess heat, and equally resistant to cold. When under 23.9°C, milk yield is unaffected; above this are multiple levels of heat stress, depending on relative humidity (bearing in mind France’s summer relative humidity is between 73 and 80%, useful for reading the chart below). 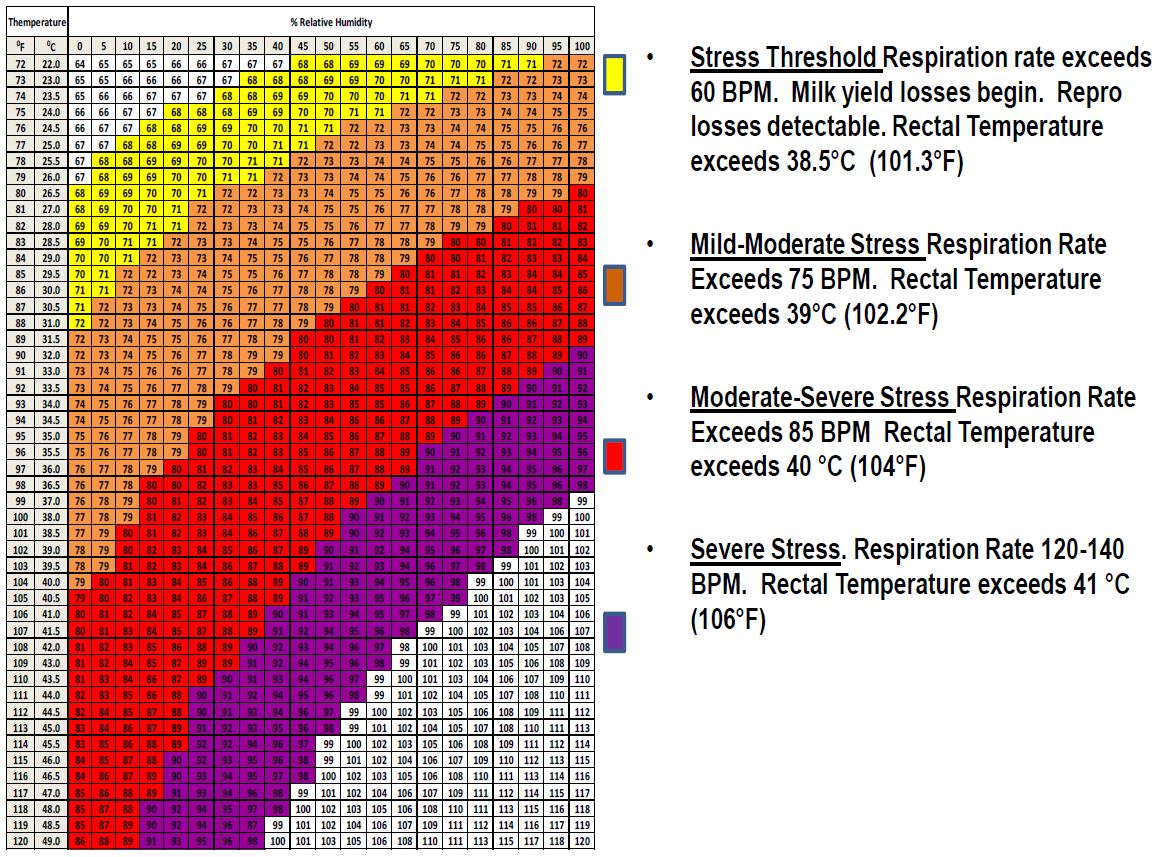 Beyond reduced milk yields and miscarriages, heatwaves above 40°C have been known to kill cattle. Using the MPI-GE and french governmental data, we sought to count the number of dairy cattle farms that could experience heat above 38°C under 2 or 4 degrees global warming.

Dairy cattle farms in France. Farms that could experience heat waves above 38°C in yellow under 2°C GW, and red under 4°C GW.

The total number of milk-producing establishments we were able to geocode in France was 3518. Of these, 28% were in the affected zone under a 2°C GMST rise. For the 4°C GMST scenario, this rises to 78%.

Before continuing, please note that the extreme temperatures could occur anywhere within the yellow and red areas, but not necessarily over their entirety at a single point in time. Nevertheless, considering France’s summer relative humidity of ~78%, 38°C would put the cattle well above the severe stress threshold (according to our table above). An unexpected temperature spike of the sort would wreak havoc on these animals, although it is likely that preventive measures will be implemented as the world progressively warms.

The signature french crop is without a doubt its renowned vineyards. Most of these are distributed throughout the southern regions of France, where searing heat waves could occur with only 2°C warming. The map below shows all of France’s 11,200 vineyards (as defined by the “Institut National de l’Origine et de la Qualité” (INAO)). 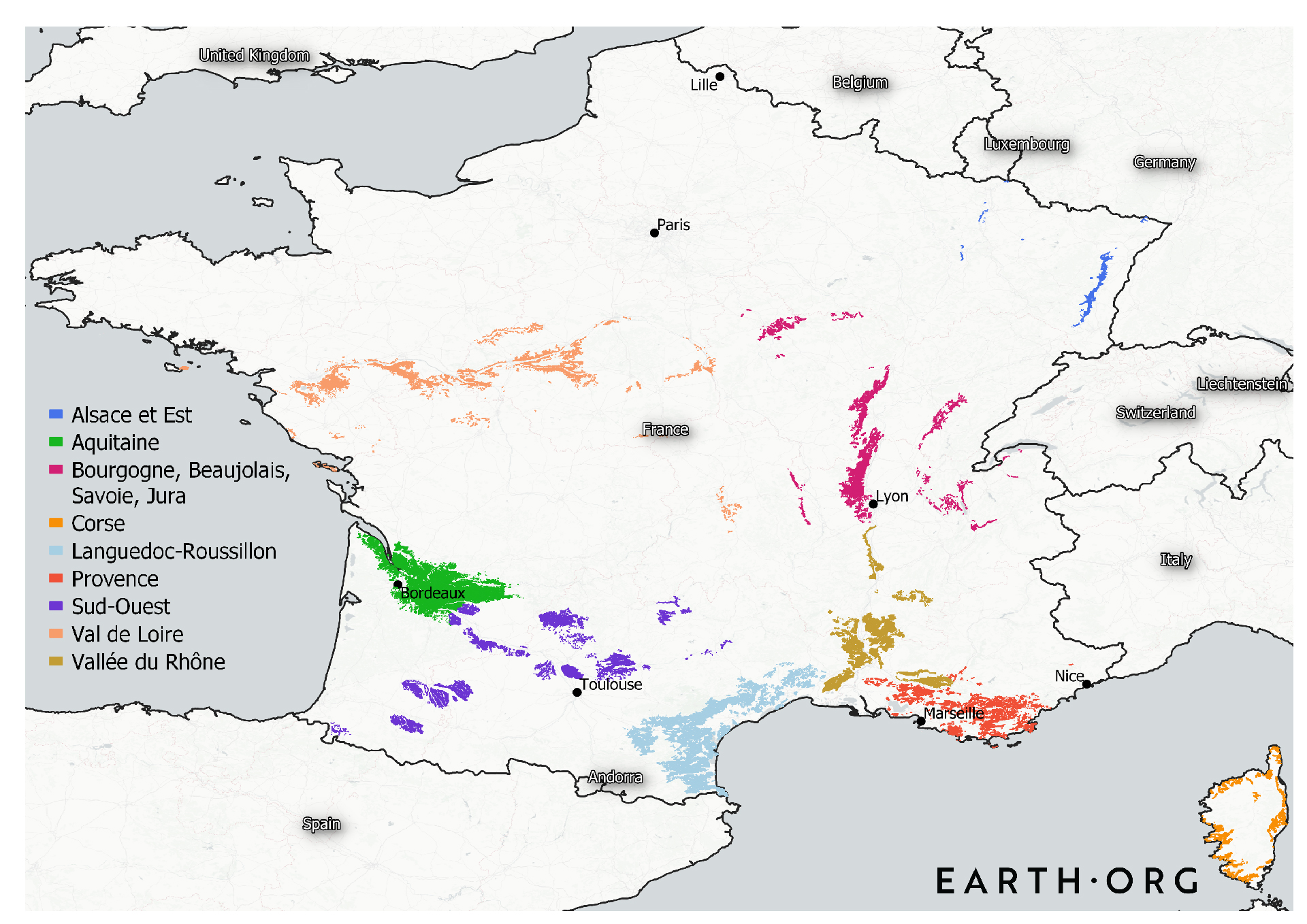 Map of the registered french vineyards, color-coded by region.

We base our analysis on the observations of vineyard heat tolerance during the 2009 Australian summer heatwave, where temperatures reached 48.8°C. According to Leanne Webb et al. (2009), hydration is unsurprisingly a key factor. Roots need to be irrigated to full capacity before the heat, after which moisture must be maintained to minimize damage.

Unfortunately, this type of preventive action is difficult in the face of unexpected heat spikes beyond what viticulturists may have experienced in their lifetimes (south of France record: 45.9°C in summer 2003).

Other factors come into play such as the vines’ stage of growth, the canopy cover provided by its leaves, pre-conditioning by prior temperatures and even the row’s orientation. There is therefore some variation in how the crops will respond to heatwaves. Typically, when experiencing uncommonly extreme temperatures, grapes will have stalled development, berry sunburn, shrivel or desiccation. Australian viticulturists reported losses ranging from 15 to nearly 50% on their 2009 harvests, in a country with many heat-adapted crops.

Under 2°C warming, temperatures in excess of 40°C could appear over all of Languedoc-Roussillon, Provence and Sud-Ouest, the majority of  Vallée du Rhône, and over half of Aquitaine. 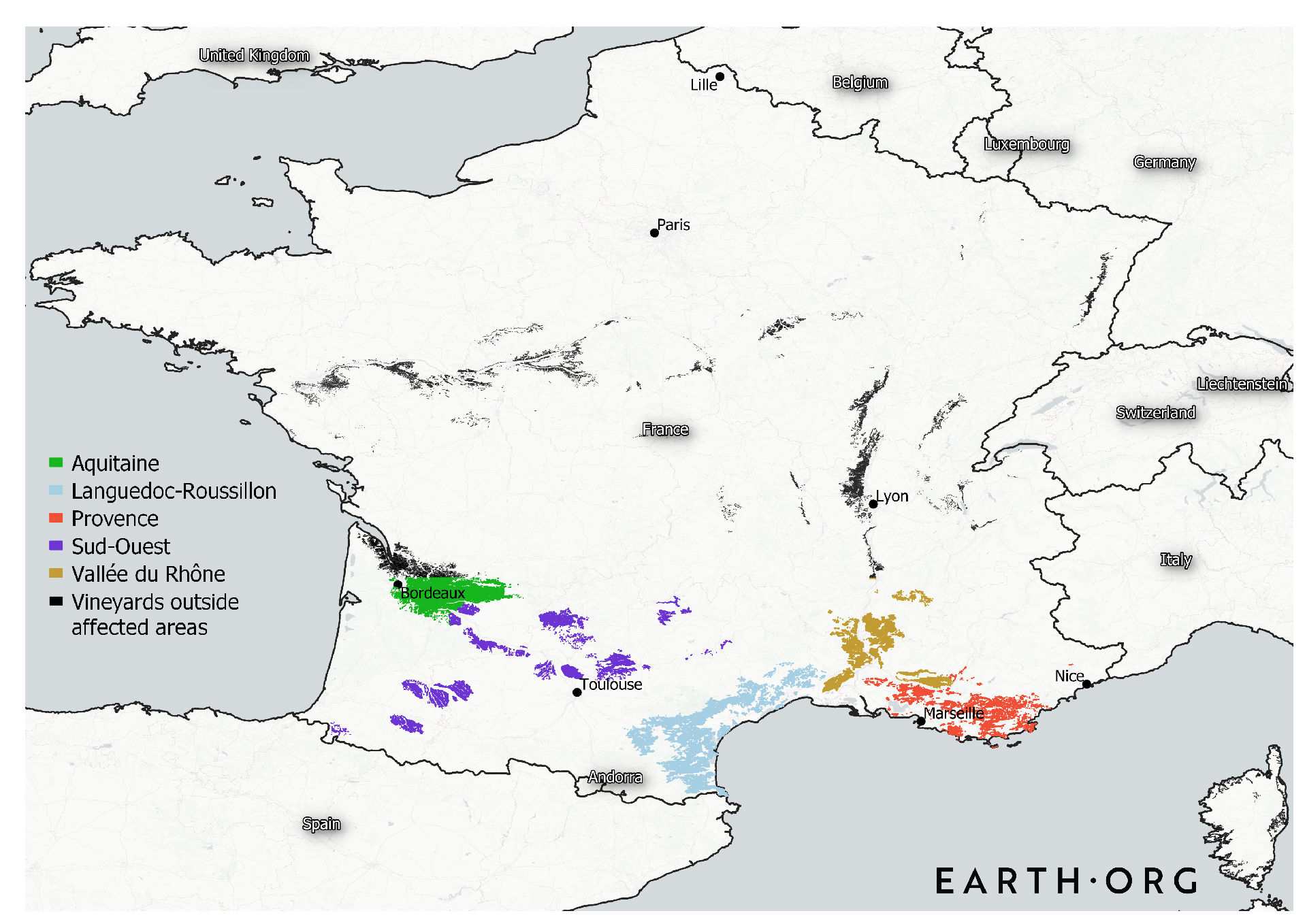 Map of the registered french vineyards. In color, the vineyards vulnerable to extreme heat spikes under 2°C GW. In grey, vineyards unaffected.

The region of Aquitaine is home to Bordeaux and its 120,000 hectares of vineyards, making it the largest wine growing area in France. The quality range varies from basic to some of the most prestigious names in the world, like the Château Margaux.

Throughout the months of June to August, Bordeaux experiences average highs of 26°C, with 7 days of rain per month. The vineyards are irrigated and protected accordingly, meaning they are unadapted to cope with a >40°C spike. While average temperature and rainfall patterns might change unpredictably in the future, they are currently trending toward longer frosts and droughts. In an interview with NPR, Nathalie Ollat, head of the Institute of Science for Vines and Wines in Bordeaux, says that “In the future, if there’s a lack of water, it will be kept for crop production – to feed people – and not for wine.”

A dreaded 4°C rise in global average temperature is becoming more likely every day, and the consequences around the world would be far graver than reduced vineyard yields. However, this is a purely hypothetical case study using a symbolic natural resource to illustrate how dangerous such a scenario could be. 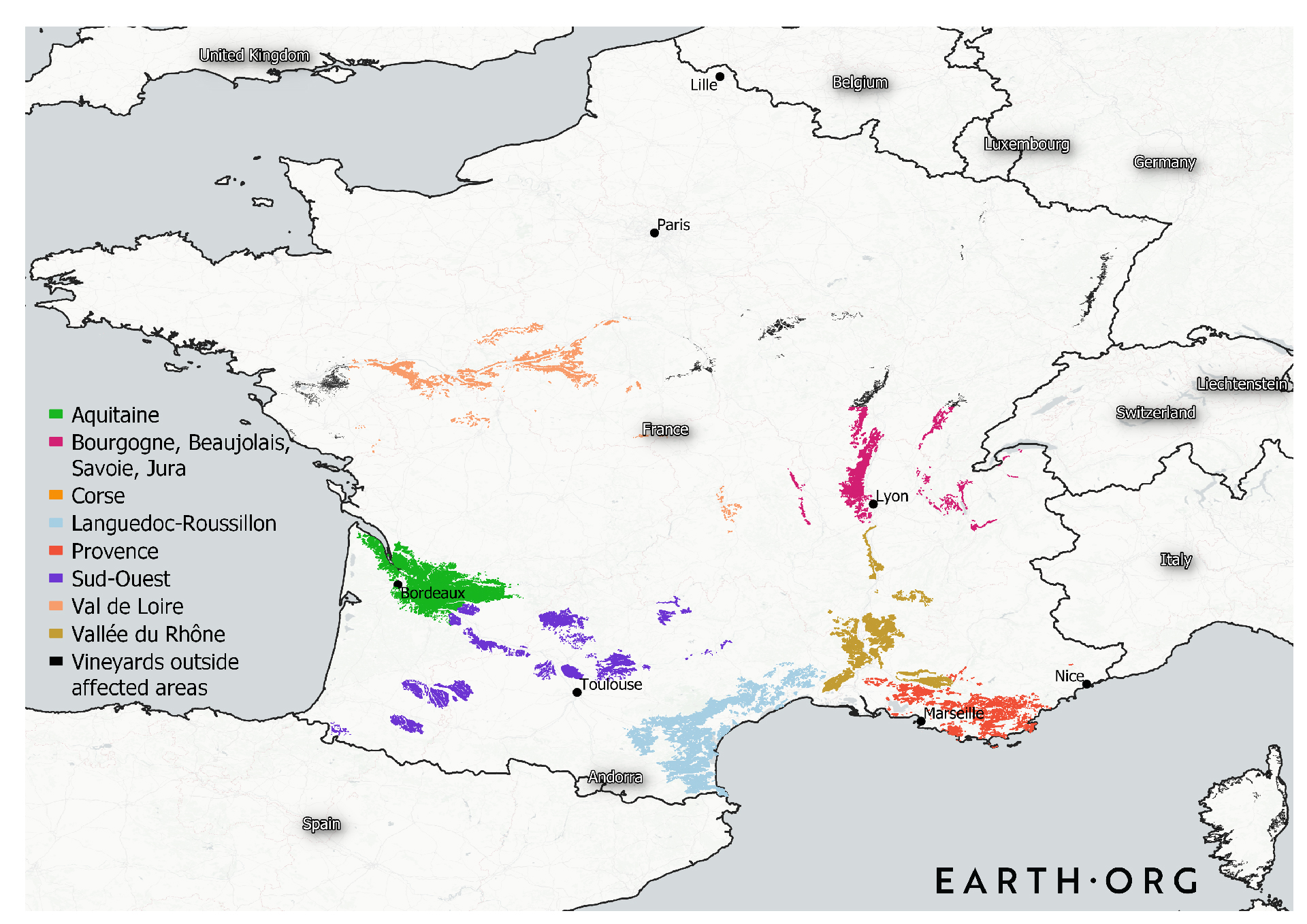 Map of the registered french vineyards. In color, the vineyards vulnerable to extreme heat spikes under 4°C GW. In grey, vineyards unaffected.

Here, we see that all of France’s vineyards are exposed to >40°C heatwaves under 4°C rise. All, except a small north-eastern portion of the Bourgogne and Beaujolais regions, along with the vineyards of Alsace. Bordeaux is now entirely within extreme heat vulnerability, and the vast majority of France’s winemakers are forced to invest in adaptation and withstand unavoidable losses.

When speaking of a 2 to 4°C rise in average temperatures, we must understand that natural variations will lead to massive much larger slimatic swings in many areas. These can be so dramatic that adaptation through artificial measures will not always be possible, and relocation is not an easy feat for individuals, let alone populations. Climate change operates with a time-lag, or hysteresis, meaning the results of today’s actions will most likely be felt in 40 to 50 years time. Extreme consequences are on the horizon, but we can contain their breadth if we act decisively in the next decade’s already narrowing window.