Recently, a NASA-led study has found the increase of Antarctic snowfall during the 20th century has escalated sea level by one centimetre per year (considerable when looking at the surface area of Antarctica). It is an important factor in maintaining Antarctica’s ice mass, and thus regulating the continent’s contribution to sea level rise, an increasingly worrisome issue.

Antarctic snowfall makes up for a third of the continent’s ice loss, and it has doubled in volume since 1850. Snowfall events often come in the form of sudden, extreme episodes that dump a large portion of the year’s snowfall in a short amount of time; studies have shown that the most extreme 10% of snowfall events accounts for about 60% of the total snowfall. 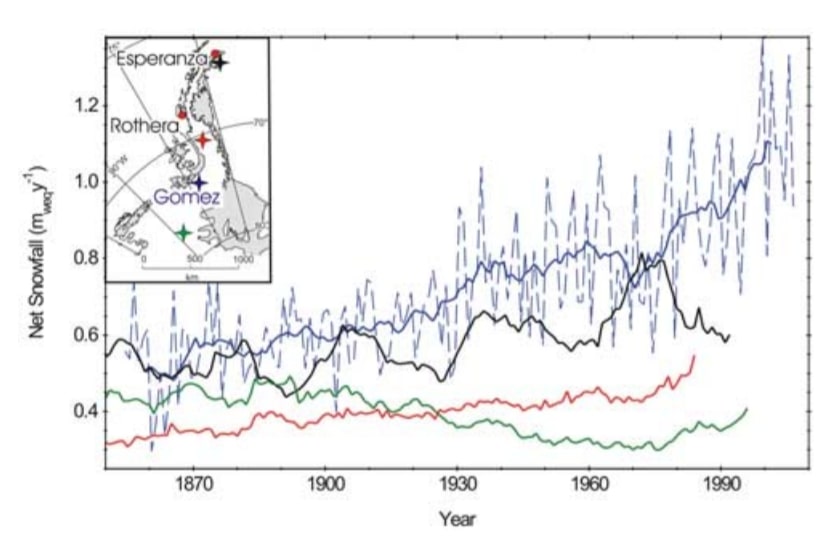 Data showing the accumulation of snow in Antarctica since 1850, each colour line represents an area in the Antarctic. Most sites show an increasing trend in net snowfall, except in Gomez(Green line) because of natural internal regional climate variation of its location on the south-western of the Antarctic Peninsula. Source: Geophysical research letters

The total ice sheet mass is constantly changing due to the amount of ice gained by snowfall compared with the loss of ice at margins via iceberg melting. When gain and loss are equal, the system is in equilibrium, but when either side falters, the mass balance changes. The study has also found that the increased amount of snowfall could help lower the sea level projections by a small portion, but it is far from enough to bring the system back into equilibrium.

As the planet gets warmer, more water is evaporated into the atmosphere, which brings more precipitation in the form of snowfall. The Clausius-Clapeyron equation states that our atmosphere can hold about 7% more moisture per 1°C (1.8 °F).

We know ice in the Antarctic ice loss is accelerating, and since it contains around 90% of our planet’s ice, which translates to 57.2 m of potential sea level rise, it is important for us to better understand the factors snowfall relies on. However, there are a few roadblocks. Firstly, there are very few weather stations and most of them are only built along the coastline. Second, snowfall trends are assessed relatively to past snowfall rates, and we can only acquire these by drilling ice cores. Unfortunately, it is extremely difficult to venture to the eastern parts of Antarctica, where most of the snowfall occurs as it is extremely remote and dangerous. Nonetheless, the available data confirms that the current rate of snowfall is unusual in the context of the past 200 years. This is a a small relief in the face of dwindling freshwater reserves and sea level rise, but a relief nonetheless.