Antarctica Melt is Unavoidable, Regardless of Climate Action

The measurement of record-breaking temperatures on Antarctica is not new, adding to the abundance of record-high temperature readings across the globe as the planet warms. In fact, the UN’s World Meteorological Organisation (WMO) reported that temperatures on Antarctica have increased by almost 3°C over the past 50 years, with glaciers experiencing an accelerated retreat. Because the Antarctic ice sheet contains 58 meters of sea level rise equivalent, scientists are growing worried about its recent behaviour.

They are trying to assess the long-term stability of the ice sheet. When in balance, ice loss equals ice gain, which primarily comes in the form of snow accumulation. Rising temperatures are expected to increase snowfall, but ice loss will likely outweigh it. The danger lies in self-reinforcing mechanisms that could lead the ice sheet past a threshold after which it is committed to a certain amount of melt. An example is the surface melt-elevation feedback, which describes the ice surface’s loss of altitude due to melt, exposing it to higher temperatures in the lower atmosphere, thus further increasing melt. A negative feedback factor is dubbed the “solid-Earth rebound”, and consists in the earth propping itself back up after shedding ice mass, dropping the relative sea level and reducing coastal ice shearing. Taking these and other factors into account, the study sought to understand the future of the ice sheet’s stability.

The analysis demonstrated robust hysteresis, meaning a lag in a physical object’s reaction to changes in the forces affecting it, in Antarctica’s ice dynamics. Thus, certain regions of the sheet are condemned to an irreversible mass loss, regardless of temperature changes from here on out. 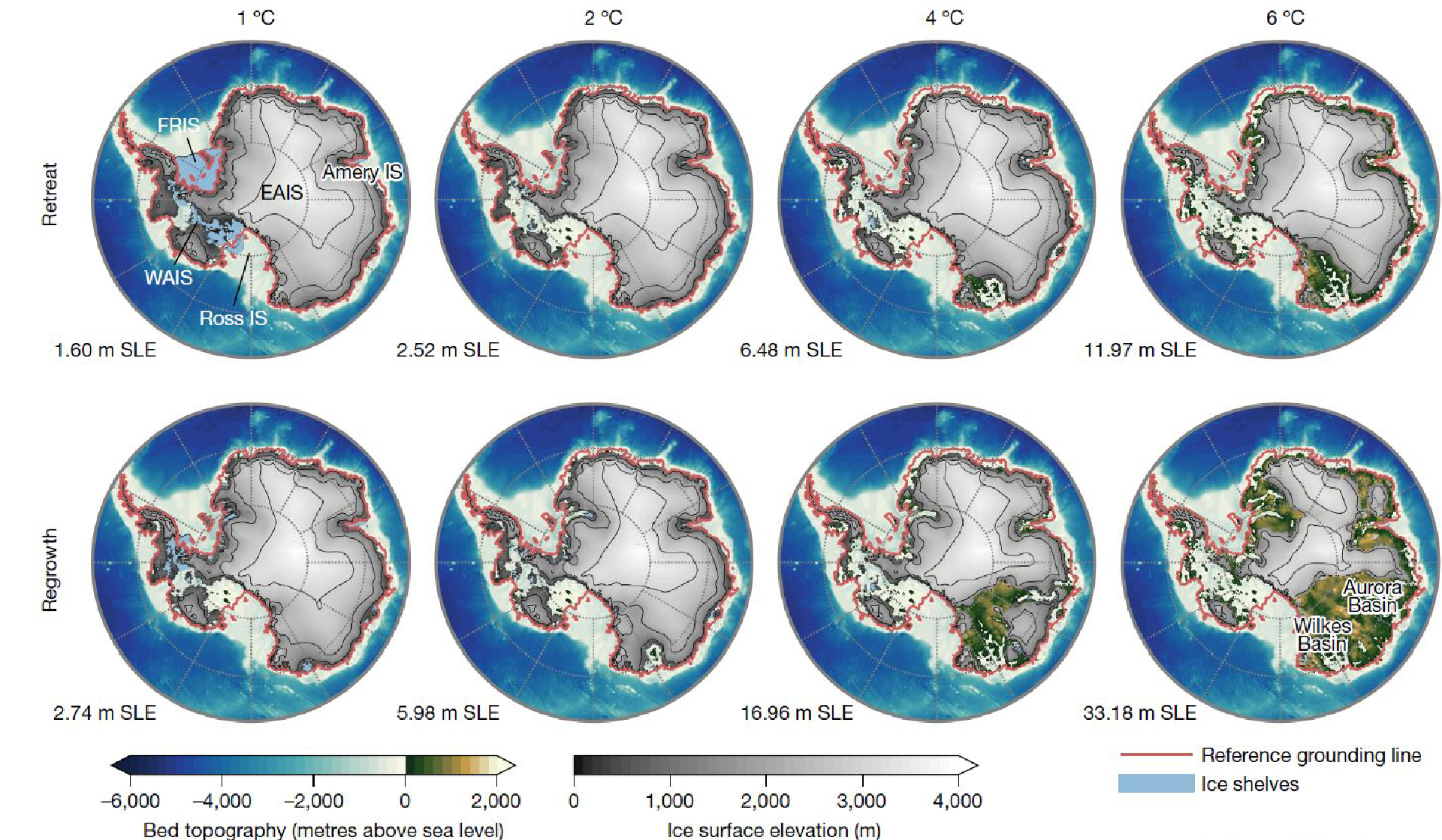 An immediately obvious result of the predetermined ice loss is the reduced brightly-colored surface area, which reflects sunlight back into space and helps cool our atmosphere. The authors warn of several other factors to consider, but the take-away message is that temperature magnifies many more melt-inducing mechanisms than stabilizing ones. Up to 4C temperature rise by the end of the century is now entirely possible, and this could lead us past many critical tipping points, locking in up to dozens of meters of sea level rise.

While the sea level rise contributions of the Antarctic may be over a century away, we surely are planning to endure far past this as a species. It may be difficult to act upon the needs of a future past our lifetimes, but our actions today will determine the fate of generations to come.

This article was written by Javier Chai Rui Cheng and Owen Mulhern.