Multiple lightning strikes were detected within a few hundred miles of the north pole in August 2019, a rather rare phenomenon as the necessary kind of storm rarely forms at those latitudes. The surprise was somewhat lessened by the near decade of reports that the Arctic is warming faster than expected, sea ice is melting along with permafrost, and meteorological conditions are changing.

A team of researchers from the University of Washington’s department of Earth and Space Sciences measured the amount of lightning strikes above 65°N in the months of June, July and August between 2010 and 2020. This has its challenges, because detection efficiency has increased year by year since records began in 2004. The trick turned out to be measuring lightning strikes above 65°N as a fraction of total global strikes. 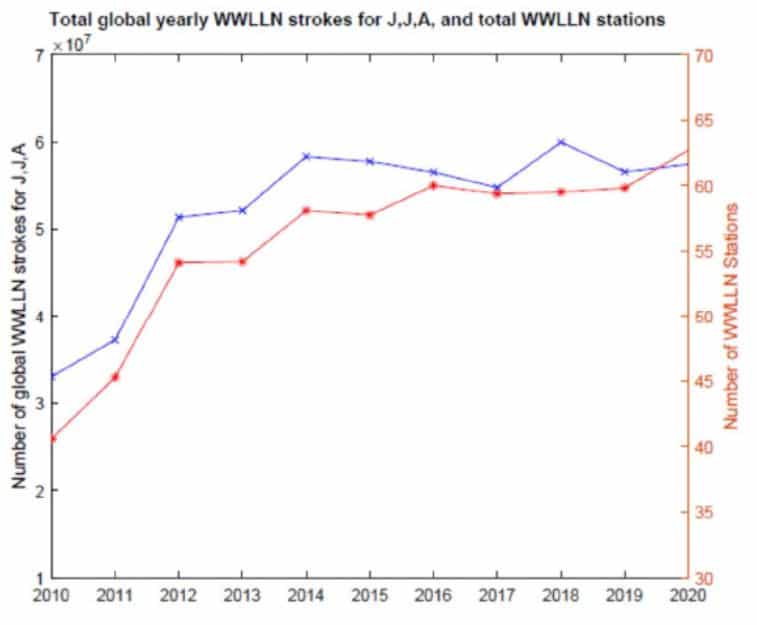 We can see that the increase in lightning strikes (blue) is closely related to the increasing number of stations (red) and therefore detection efficiency. The distribution of high latitude lightning (above 75°N) over the last 11 years is shown in the map below. 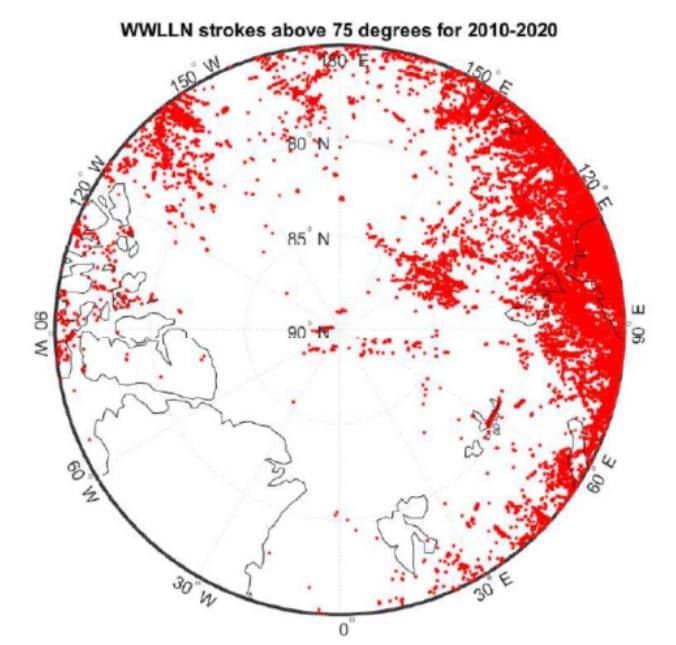 A cluster of lightning strikes near the north pole all occurred on August 13, 2019, sparking interest and concern among scientists. It is difficult to derive any solid conclusions from a single event however, so it remains an outlier and nothing more for now.

Moving on, the authors of the study compared the increased frequency of lightning strikes to NOAA global temperature anomaly data, finding that they had a linear relationship. 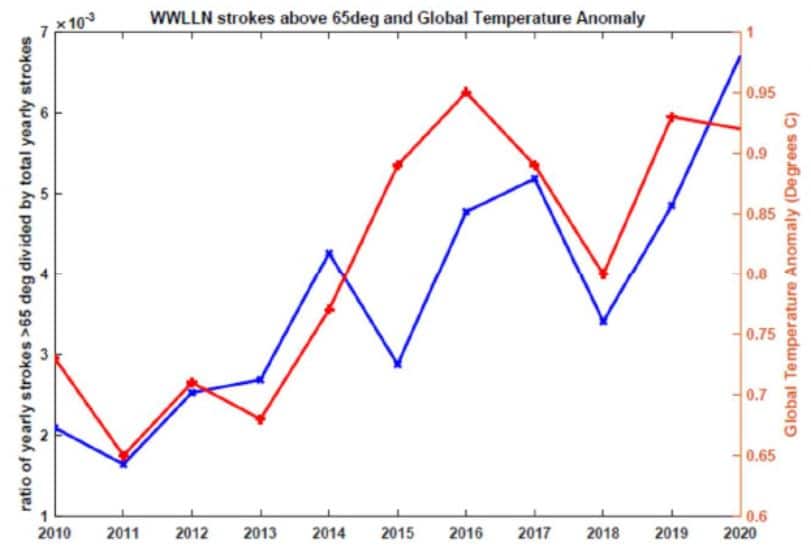 Ratio of (blue) lightning strikes above 65°N to the total number of global strikes, and the global temperature anomaly in degrees C (red), for June, July and August each year. Source: Holzworth et al. 2020.

Why should we care?

Many of you may be asking yourselves this question at this point. We’re not just showcasing some of the latest climate-related data, we’re showing part of a larger picture.

You may remember the outcry at the large arctic wildfires last year, burning up some of the largest and oldest carbon stores in the world. This is a result of a rapidly warming Arctic, going about three times faster than the global average. Higher temperatures make thunderstorm formation more likely, therefore increasing lightning strike and wildfire occurrence. Not to mention permafrost melt and methane release, which could be a ticking time bomb, and at best just makes things worse.

The issue with uncharacteristically high latitude lightning is that it reflects the changing nature of Arctic weather. The first signs of it doing so in 12,000 years of stability, indicating that its state of equilibrium may not last.

While it will undoubtedly take a long time for the Arctic to drastically change, we need to understand that a destabilized future can be locked in well before it comes to pass. We need to be careful not to push it beyond such a tipping point if we are to avoid a difficult future for the generations to come.

This article was written by Owen Mulhern. Cover photo by Felix Mittermeier on Unsplash