Solar panels are the fastest-growing renewable energy option, thanks to falling costs and increasing investment. Their easy installation and “low emissions” explain how their number has increased 300 fold between 2000 and 2019. Is all this glitter actually gold?

Solar power has evolved from a niche market to a ubiquitous product, from IKEA shelves to online retail. Countries around the world have been increasing their solar capacity since 2010 and the trend is said to be continuing in the foreseeable future. China has been the country who has made the most significant change, going from 19 to 680 Megawatts (Mw) in the last two decades.

There are a couple of factors fostering its growth, coming together to make solar an attractive market option. According to the International Renewable Energy Agency (IRENA) in 2019, solar energy and onshore wind are now the cheapest sources of energy in the world. Since 2010, the price for solar panels has fallen by a whopping 82%, averaging USD $0.068 Kilowatt-hour (kWh) in 2019 (compared to coal’s US $0.32). 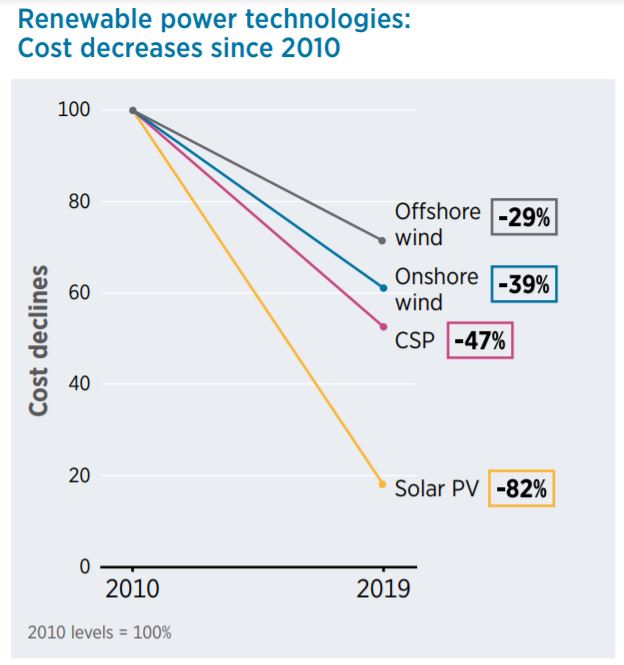 A recent study by MIT researchers has pinpointed the drivers of this stunning price drop. It is due to a fluctuating combination of improved solar cell efficiency, cheaper materials, public and privately-funded R&D, market-stimulating policies and scaled up production. For instance, the price of polysilicon, the dominant PV material in the current market, has dropped from $126 per kg in 1980 to $26 per kg in 2012; and panel cost has gone from $29.07 per watt to only $1.08 in 2012.

Favorable policies’ role in enabling market competitiveness has been key. According to the study, these accounted for ~60% of the overall cost decline. Examples such as renewable portfolio standards and Feed-in Tariff have required or encouraged electricity suppliers to provide their customers with a stated minimum share of electricity from renewable resources. This helped direct private investment toward R&D, which has significantly helped optimize the technology, namely improving efficiency as previously mentioned.

Solar panel efficiency is the measurement of how much of the sun’s energy a certain panel can convert into usable electricity. If a solar panel has 20% efficiency, that means it’s capable of converting 20% of the heat it receives into electricity. The average falls between 17 and 19%, with the highest standing at 27%. The technology is expected to reach 50% with the newly developed prototype, although it remains unclear how easily deployed this model would be.

When compared to its biggest competitor, wind power, solar energy still wins the race despite having a lower power-generating capacity and a higher price. Wind turbines are not aesthetically pleasing; they also require more space and their massive blades kill many birds. Further, they can’t be deployed in urban settings and thus can’t be used on the individual level.

Solar panels, on the other hand, can overcome such issues. Unlike wind turbines, solar energy production does not create any noise since a lot of installations are in urban areas, such as domestic solar panels. Energy production of solar panels is relatively flexible in comparison to wind power. As long as there is sunshine, they can be deployed anywhere. This makes them suitable in both remote areas, where access to any source of electricity is limited, or urban areas, where space is limited.

“Zero emissions once installed” is a nice catchline for solar panels, however, they aren’t causing zero environmental impact for their entire lifetime. Here are some concerns that come along with the “perfect” solar panels.

Altering land use and harming ecosystems

Large areas are required for collecting solar energy at a utility-scale. The plants can affect the environment near their locations. Clearing land for construction and the placement of the power plant may have long-term effects on the habitats of native plants and animals. According to the Forest Service, over 2.327 million trees were felled since 2017 to make room for solar power plants.

Some plants may require water for cleaning the panels and concentrators or for cooling turbine generators. Using large volumes of groundwater or surface water for cleaning collectors in some arid locations may affect local communities and ecosystems that depend on these resources.

To produce solar-grade silicon, semiconductor processing typically involves hazardous chemicals like cadmium telluride. Depending on the solar panel manufacturer and country, these chemicals may or may not be disposed of properly.  Like every industry, there will be some irresponsible handling of chemical waste and/or poor recycling practices.

The solar panel industry’s production is outmatching its recycling capacity, partly because there aren’t enough old modules to recycle yet. Once the first wave of expiry hits, there will be a massive surplus, full of rare or precious materials such as silver, tellurium, or indium. Unsophisticated recycling could result in a waste of valuable elements, but also in environmental contamination that regulation hasn’t yet caught up to.

While downsides to solar energy do exist, the good news is that the market is moving in a sustainable direction.

For instance, when considering the carbon footprint of production, researchers use the energy payback time (EPBT) to estimate the environmental impact of solar energy. EPBT can tell us how long it will take for solar panels to produce enough clean electricity to “pay back” the energy that was used to produce them. In 1970, the average energy payback time for solar panels was 40 years. By 2010, that number had dropped to just six months.

Constant R&D-driven optimization has led to a 62% drop in material required for the cells, and new material discovery and design (like perovskites) is continuously increasing cost-effectiveness. Once recycling methods develop, the most pressing environmental issues will have been addressed.

So, solar has its share of environmental impacts, but its benefits far outweigh its costs. More support and advertising should be shown to allow the general public to learn and have access to this golden renewable energy.  The recent blackouts in California show that our energy grids must also be adapted to avoid power troughs in response to extreme situations, but countries like Germany prove that this is entirely feasible.