A recent study by Blackwell et al. (2020) has found that a large part of the California coast is sinking due to ground subsidence, linked to extreme heat and prolonged droughts. Combined with rising sea levels, the fate of California’s coastal regions is at risk.

Global Mean Sea Levels have risen approximately 25cm (9 inches) since 1880. Historically, sea level rise has largely been caused by thermal expansion, as warmer waters increase in volume and the ocean has been soaking up more heat than the atmosphere. In recent years however, the poles have disproportionately warmed up and accelerated the rate of glacial and ice sheet melts. Water frozen for thousands of years is now making its way back into the ocean, with many knock-on effects.

For a long time California has been building up and capitalising on its vast and beautiful coastal regions because they have been largely unaffected by sea level rise caused by thermal expansion.

Cool winds and chilly water coming from the north have kept the local waters surprisingly cool for the region’s hot and arid climate. Conversely, states on the US gulf coast are facing increasing risk of flooding due to sea level rise, with the Mississippi delta appearing to be on the verge of collapse. 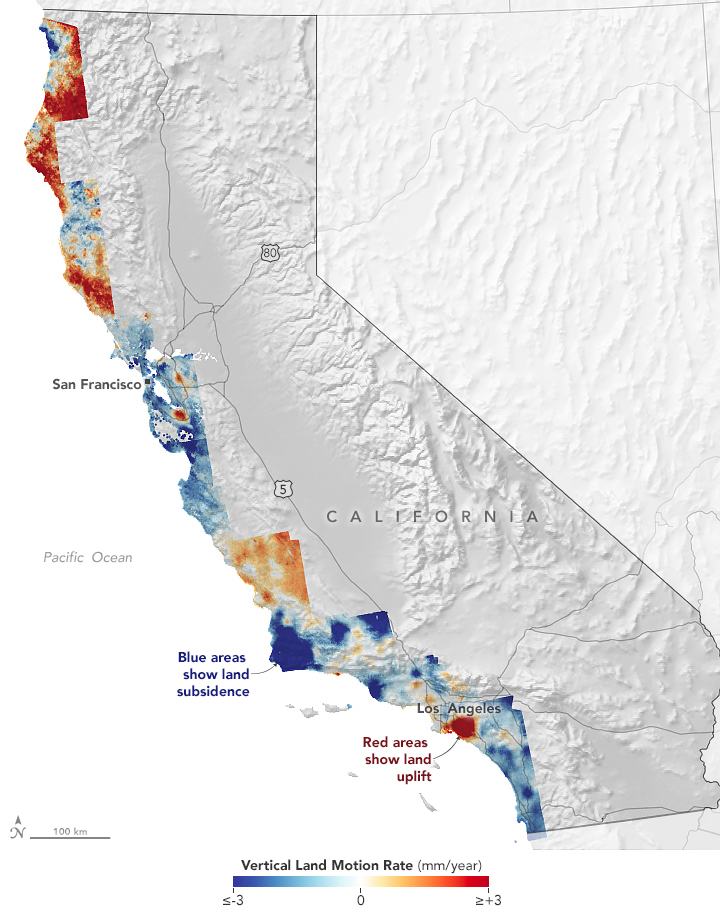 In addition to rising sea levels, California is also experiencing vertical land motion – that is, the rising (uplift) and sinking (subsidence) of land.

By analyzing satellite radar measurements, NASA’s Earth Observatory has been able to capture  the land motion of California’s coast in the picture above, with areas of uplift marked in red, and areas of subsidence marked in blue.

Immediately,, the San Francisco Bay area’s subsidence stands out, especially in the cities of Oakland, Berkeley, and San Mateo. 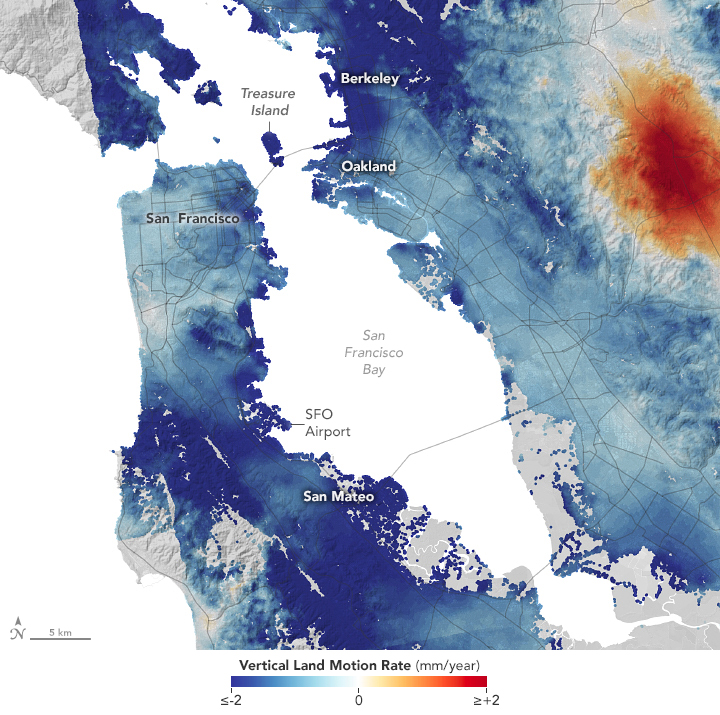 California’s land subsidence is intrinsically tied to prolonged droughts and simultaneous record breaking heat. To compensate for the lack of rain water during the droughts, the region has been depleting local aquifers at alarming rates to sustain its 50$ billion agricultural industry. So much water has been pumped out that the central valley region is sinking at rates of up to 25cm per year. And between 2012-2016, while California experienced a particularly bad drought, aquifer depletion resulted in land subsidence of up to 60 cm per year in parts of the central valley.

What does this Mean for California?

Blackwell et al.’s study (2020) estimates that between 4.3 million and 8.7 million people in California’s coastal communities are currently exposed to subsidence and sea level rise, including parts of the populous cities of San Francisco and San Diego.

But there is hope yet. Notice how Los Angeles is uplifting rather than subsiding? This is a result of California’s aggressive water management plans to save its aquifers. By diverting water back into the aquifer they are preventing further sinking, and actually raising the land below through groundwater replenishment. And the Surfrider Foundation, a Non-profit environmental organizations working to protect and preserve the world’s oceans, has issued their State of the Beach report which cited California as a “shining example” for their efficient and proactive response to addressing changes to their oceans and beaches, earning them the only “A” grade in the nation, the Orange County Registrar reports.

With more strategic planning, California and other risk prone coastal areas can combat the threat of rising sea levels, but only if the threat is addressed seriously and proactively.