Can We Feed 9.6 billion People?

In a study published in 2013, Deepak K.R. et al suggested that to meet the food demand by 2050, our current agricultural production must double. Focusing on wheat, maize, rice and soybean, which provide 2/3 of global agricultural calories, they found that we are heading for a 30-40% yield increase by mid-century. 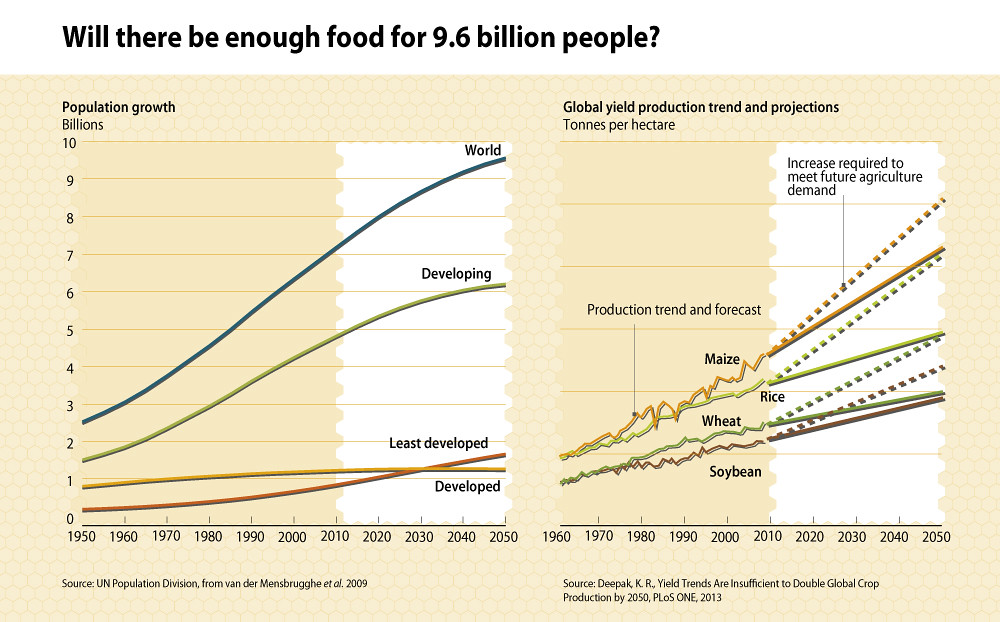 About 200 000 to 230 000 people are added to the world food demand daily, and the UN estimates that by 2050 the world population will reach 9.6 billion (UN DESA 2013). Developing countries, especially in sub-Saharan Africa, will contribute much of this population growth. Population increases will place additional pressures on already limited natural resources and food security will remain a big challenge. Source: https://www.grida.no/resources/8183 – credit to Riccardo Pravettoni.

This demand for higher yields is not only related to population growth, it is also the type of products we favor. Demand in meat, dairy and biofuel have a tremendous cost and impact, and a reduction in their production and consumption could make our land use more efficient. In fact, Research we now know that the excess energy and land put into these three sectors could be used to feed the 870 million chronically undernourished people on Earth today. Veganism is essentially a cure to world hunger, albeit at a price we don’t seem willing to pay.

Widespread fertilizer use has allowed us to boost yields in the last decades, but we must now use more each year to maintain the same level of production. If there were no yield enhancement solutions, our only other option would be to create more agricultural land. The resulting loss of wilderness may be too high a price to pay, as it is already dwindling fast and we all depend on it more than we know.

It proposes to intensify crop yield while respecting the main environmental issues facing agriculture today. It is a war by inches, that preaches a return to more traditional techniques that were widespread before fertilizers came along. Some of these include allowing animals to graze on unused lands, and letting cover crops grow (instead of leaving the land bare as most do today). Erosion is thus reduced, while the earth is naturally filled with nutrients by the animal’s passage.  It is hard to scale up these solutions at the moment, but there are many scientists pushing for it.

There are other solutions to provide food for all. A shift towards a more vegetable-based diet would have a tremendous positive impact, but such behavioural change goes against much of the luxury and comfort people have acquired over the past two centuries. Food waste is also an issue that we could put some work into: around 88 million tons of food are wasted in Europe every year. Reducing waste by 50% would increase food availability by 15%. By decreasing our meat and dairy consumption, cereals (e.g. soybean, maize) required for livestock production would be used by people in need. Behavioural change is difficult but not impossible.

A combination of “sustainable intensification”, diet change and food waste reduction is the most feasible and promising solution to solving current and future food insecurity.

This article was written by Carla Baizeau.