Climate Change and Conflict in Africa

Climate change exacerbates the natural disasters that play an important part in conflict ingition or exacerbation in Africa. As extreme weather events worsen, insecurity feeds the insurgence of armed conflict in fragile regions where weak institutions and economies,  injustice, violence and social insecurity are already prevalent. 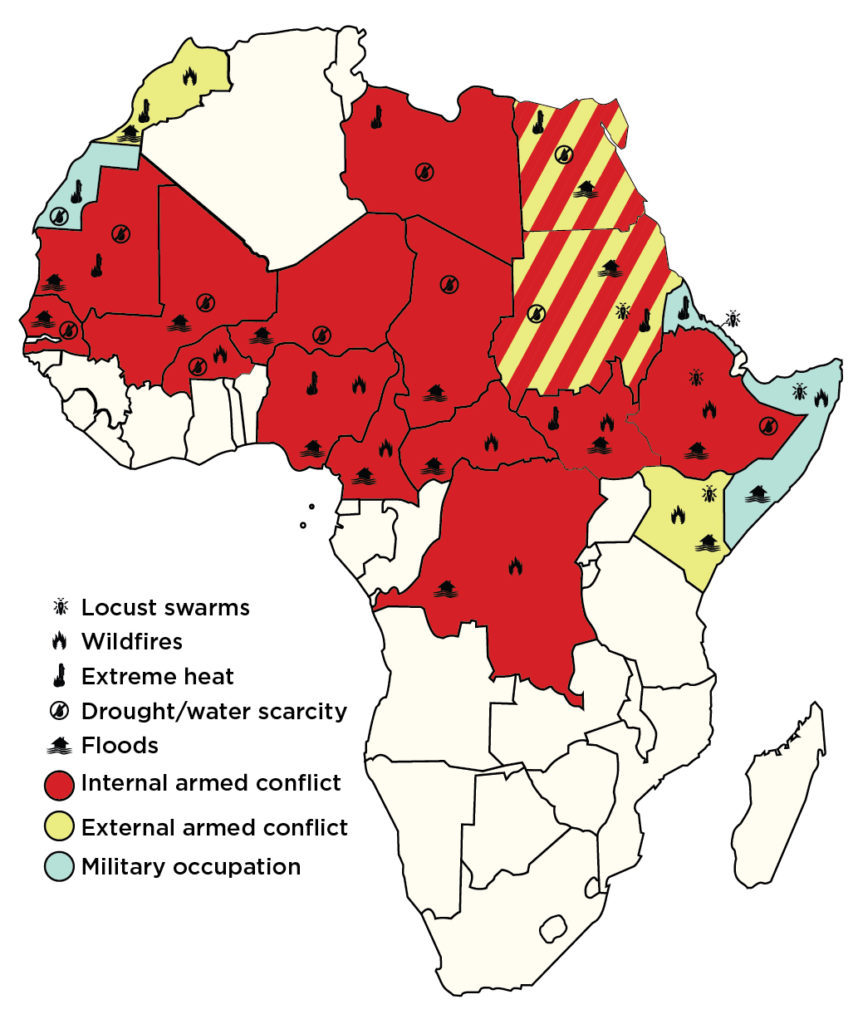 According to the consensus, climate woes are not the main cause of armed conflicts but it is one of the factors that magnifies them. Today, social and political factors have a larger impact on conflicts while natural disasters rather deepen these challenges. However it was estimated that a 1 % temperature increase could elevate risks of civil war by 4,5 % implying a projected 54 % increase in armed conflicts by 2030. In the last century, climate change affected 3-20 % of conflicts, and its growing weight in Africa is both a cause and a consequence of conflict.

According to the Clausius-Clapeyron equation, the atmosphere can hold 7% more water for each degree of atmospheric warming, thus hydro-meteorological disasters are one of the most visibly affected phenomenons.

These include extreme changes in rainfall, increased probability of storms and flash floods but also droughts and their incumbent wildfires. Here are some examples.

The Sahara and the Sahel

These regions frequently experience droughts that affect millions every year. As it stands, the areas worst hit remain underdeveloped and cope with extreme temperatures, and food and water scarcity.

People in the Sahel rely heavily on pastoralism, and the increasing frequency, duration and intensity of these droughts forces different communities to drive their herds towards the same remaining grazing lands. This is one of the mechanisms through which conflict can ignite, as both parties are hard-pressed for resources.

Many current ongoing conflicts are influenced by climatic changes in Africa. The Darfur conflict is considered the first entirely climate-change driven conflict; rainfall patterns were 30-75 % below expected levels and the resulting water scarcity was a decisive factor in the civil war’s outbreak. Mali, Burkina Faso and Niger have very high proportions of people under the poverty line who depend on the land. Recent droughts have displaced millions, who find themselves threatened by ongoing islamic clashes in Burkina Faso, or wide-spread communal disputes due to resource scarcity.

The Horn of Africa in the East has recently experienced unprecedented drought, along with a resurgence of locust swarms. Both Ethiopia and Somalia have a very low human development index and more than 80 % of the population is employed in the agricultural sector with vulnerable rainfed agriculture. When extreme events put large numbers of people in lack of sustenance, extreme behaviour arises which could explain the social triggers for conflict. 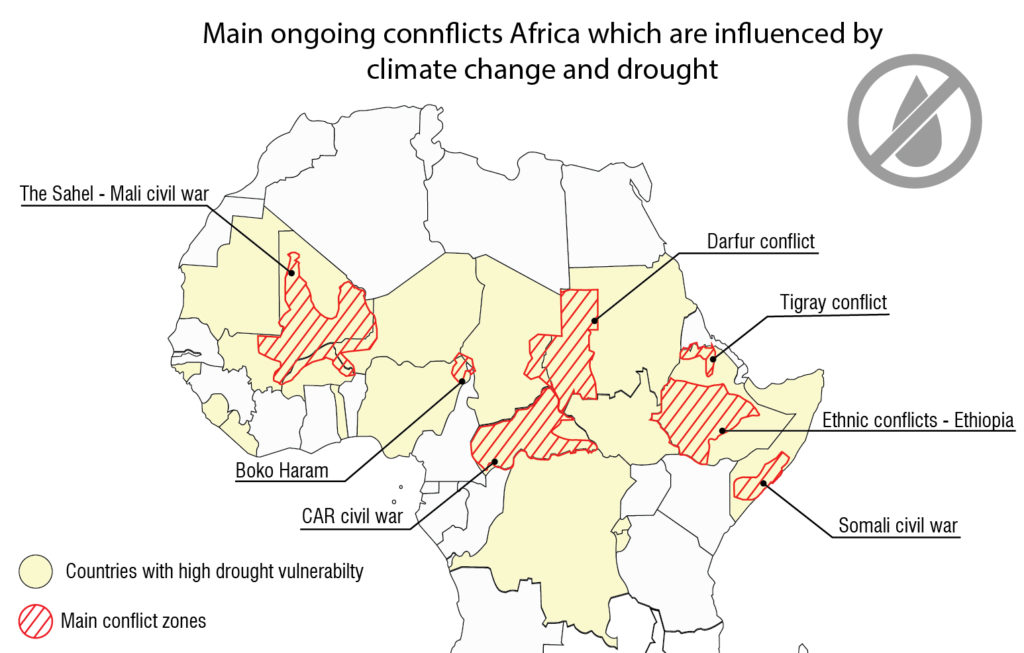 Conflict zones in Africa and countries with the high climate change-driven drought vulnerability based on the Climate Vulnerability Index (CVI). Map by Simon Papai.

The Central African Republic is an interesting case. It is not yet affected by increased drought or desertification, but its borders are often crossed by herds from neighboring nations with resource scarcity. Increased competition from unwelcome visitors is not well received, leading to frequent clashes and volatile security in the northen parts of the country.

Islamic terrorist groups are one of the main sources of conflict throughout Africa today and they are worth mentioning here. The infamous Boko Haram is a terrorist group expanding through Nigeria, Cameroon, Chad and Niger, killing tens of thousands and displacing over 2 million people. Where they are most active, in northern Nigeria, rainfall has been scanter than usual in recent years, putting the locals in extremely difficult positions.

Of the 20 countries most vulnerable to climate change, 12 are at war. The double front line of climate change and conflict drives people away from their homes, leads to food insecurity, worsens disease and hampers healthcare efforts.