Nineteen of the twenty hottest years on record have occurred since 2001, not including 2020 which is on track to top the list. Research has found that mean annual temperatures above 29°C, currently found in 0.8% of the world and too hot to live in, could affect up to one third of the world’s population by 2070. If we continue down this path, climate change could nullify development efforts in Kenya and other parts of Africa.

Located on the equator, Kenya does not experience a real differentiation between winter and summer. The year is divided by a dry and a wet season, during which daytime temperatures usually fluctuate between 20°C and 28°C, with higher temperatures near the ocean. The relatively stable climate has allowed its economy to grow steadily, relying on tourism, agriculture, IT and financial services. Most of its flourishing social and physical infrastructure is located in the temperate and forested Southwest, while the arid North and Northeast (NaNE) harbors only 6% (7 million) of the population.

This isolated segment of Kenyans rely heavily on agriculture and livestock, yet frequent droughts make life difficult; over 70% these people live in poverty. Socio-economic statistics, like a female literacy rate 50% lower than the national average, indicate how excluded this part of the country is. To remedy this, the government launched a US $1 billion North and Northeastern Development Initiative (NEDI) that will help transform the rural backcountry into an integral element of Kenya’s economy.

Encouraging news, but there is a problem. A climate change model by Xu et al (2020) predicts that the NaNE could become as hot as the Sahara by 2070. 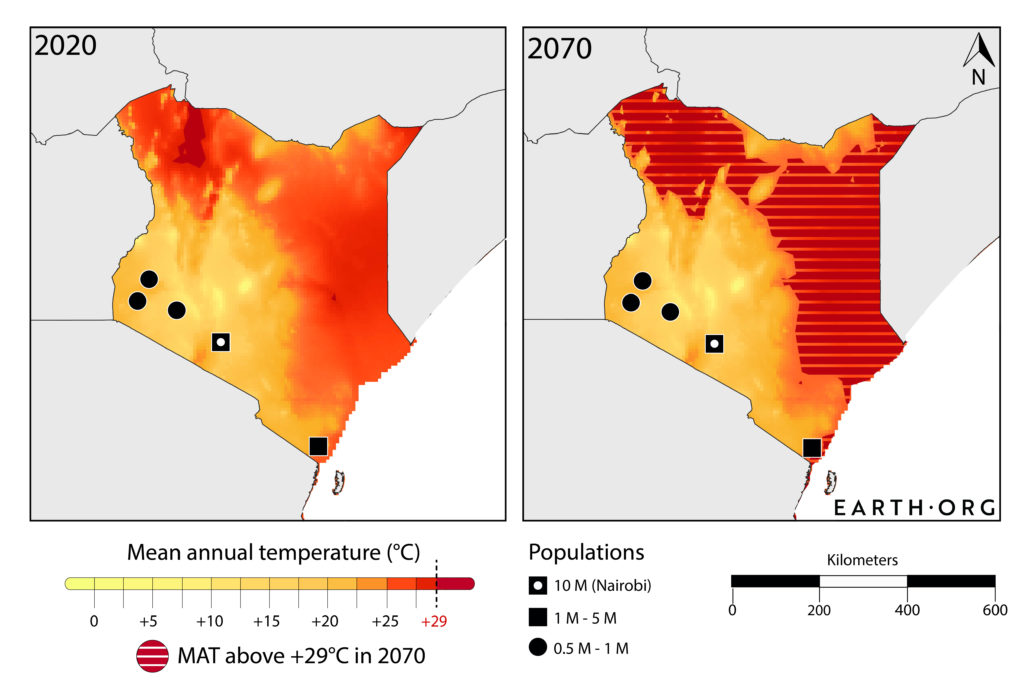 Kenya’s stable climate means the large majority of the NaNE will become unbearably hot year-round in only fifty years. This gives the NEDI enough time to build the much needed roads, electric grids, water systems and social infrastructure the region needs. Developed infrastructure is likely to bring about economic growth and opportunity, leading to more private investment and agglomeration growth. When all is said and done, far more than the government’s US $1 billion could end up being invested in the NaNE, all of which would be for naught if it became Mars on Earth.

We live in a pivotal decade where our decisions will shape the future of our civilization. For the first time in human history, we must look not 5 but 50 years ahead, into scenarios laid before us by the scientific community, but which none have experienced. The challenge is great, but not insurmountable. Little by little, global opinion is integrating an awareness for climate change into its daily approach, and we are all part of it. By reading this far, you have either learnt or reinforced what you knew, and you can help us and yourself by sharing this knowledge with others.