Climate Change Will Alter Forests as We Know Them

Every year, as forests are cut or burned down, the world loses more and more of a valuable carbon sink. The emissions caused by deforestation are a driving factor in our changing climate. Tropical tree cover loss makes up the third largest source of emissions behind China and the United States. But the link between forests and climate change runs both ways. As the climate heats up, forest ecosystems will experience damage and degradation that threatens to accelerate emissions.

Forests have adapted to past eras of climate change

Forests are resilient ecosystems. This is not the first time they have weathered a changing climate. The forests we have today were shaped in part by the warming at the end of the last ice age.

Much of the world used to be covered by massive glaciers that only began to recede about 12,500 years ago. As temperatures rose and the glaciers retreated, trees began to advance back towards the poles, establishing the boreal and temperate forests of the northern hemisphere.

Tropical forests are even older, with some of the oldest ones showing up in the fossil record 140 million years ago during the age of the dinosaurs.

Over time, the rise and fall of sea levels and fluctuations in global temperature contributed to the diversity of species that make tropical rainforests so unique. Studies of fossilized pollen suggest that the Amazon rainforest withstood the cooler, dryer climate of the last ice age and potentially several ice ages preceding it, making it an incredibly resilient ecosystem.

If forests have endured millions of years of climate fluctuations, why are current rising temperatures a cause for concern? For one thing, climate change is happening fast this time around. The global temperature has already risen 2 degrees since record keeping began in the 1880s. Earth typically experiences climate cycling on the scale of hundreds of thousands of years.

That’s not to say that rapid climate change has never happened on Earth before. The impact of the asteroid that killed the dinosaurs caused dramatic global cooling in a matter of decades. But climate change on short time scales is almost always associated with mass extinction events. Roughly 75% of known species were wiped out alongside the dinosaurs. Global climate and temperature changes on short time scales present a serious threat to Earth’s biodiversity.

Forests are already feeling the impacts of a warmer world 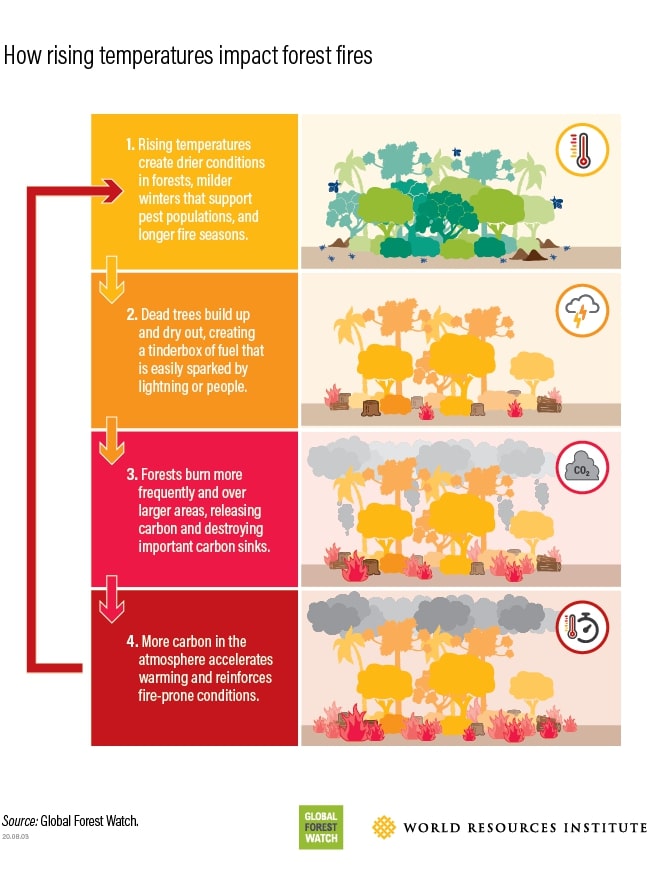 Some studies estimate area burned in the United States could increase by 50% by 2050. Canada’s burned area has already doubled since the 1970s. Although temperate and boreal forests do experience fires as a natural part of their ecosystems, more frequent, intense fires have the potential to cause serious damage.

Pest infestations are also becoming more common. Milder winters in North America have allowed for parasitic species like the pine beetle to proliferate without sharp freezes to kill off larvae. The beetles reproduce under the bark of vulnerable trees, killing them. Dead trees dry out and become kindling for future wildfires that release more carbon and accelerate climate change, enacting a vicious cycle.

In some areas, like the arctic or Africa’s Sahel, increased temperatures have allowed for the advance of trees into previously unwooded areas, but the overall impact of climate change will be negative for forests. In the tropics, dryer conditions mean less rainfall, which doesn’t bode well for rainforests. As vegetation dries out, fires could become more common in an ecosystem where they are not natural. Some researchers hypothesize that reaching a certain threshold of drying could push the Amazon over an ecological tipping point, where the environment is no longer able to support a forest. The world’s largest rainforest could degrade to savanna in less than 50 years.

While protecting and restoring forests may be essential for slowing climate change, reducing carbon emissions is also critical to preserving forests in the first place. Already, the impacts of climate change are being felt from the tropics to the boreal region. If warming continues, the forests we know may look a lot different in the decades to come.

This article was reposted from the Global Forest Watch.