Before COVID-19 ever hit, mental health issues had already been on the rise for years. This is partly attributable to social media, but it also seems that life in a concrete jungle can get to us. Here, we present a satellite-based analysis of the health benefits of green spaces.

Health Benefits of Green Spaces have been known since the 19th century urban parks movement in Europe and North America. Today, the relationship between humans and nature is unhealthy, especially for kids who learn about nature through screens and spend very limited time outside to experience nature in its truest form. With growing urban population and increasing urban infrastructure, the emphasis on green spaces and being outdoors has taken a backseat until recently, due to the rising health issues among all age groups. Research has shown that being close to nature increases cognitive abilities and attention spans of children, and fosters their creative thought process, problem-solving skills and self-discipline. Children that spend more time outdoors working with soil and plants are more sensitive towards their surroundings and develop a sense of belonging and appreciation of the environment as they grow up. Studies have suggested that the people closer to green spaces have a lower risk of developing psychiatric disorders compared to the ones with less green spaces.

To further emphasize the importance of green spaces for maintaining mental health, satellite data are now used to establish how mental health improves with proximity to green spaces over a period of time. The figure below describes this correlation between green space and mental health using LANDSAT by researchers from Denmark’s University of Aarhus. The satellite data was used to collect the information from 940,000 Danish Citizens born between 1985 – 2013. This data along with georeferenced house addresses, socioeconomic status and health records was used to derive the correlation. The effect of proximity to green space on children below 10 years and the long-term mental health was also recorded. This study revealed that people living closer to green spaces have 55% less chance of having psychiatric disorders like stress, anxiety and substance abuse. 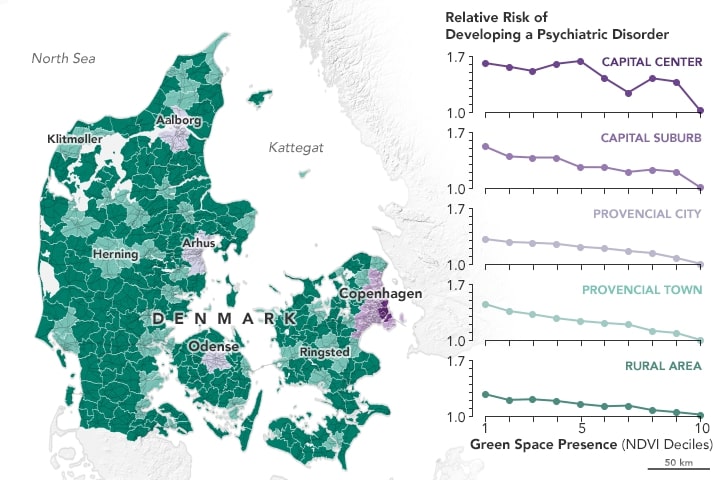 Green space presence here is defined by Normalised Difference Vegetation Index (NDVI)- a measurement representative of the greenness of the parcel of land. Darkest green are the most rural or undeveloped areas and the darkest purple are the most developed and paved areas. Source: NASA Earth Observatory.

Another study done in Wisconsin, USA found similar results. It was found out that neighbourhoods with more green spaces corresponded to better health outcomes. Long exposure to green spaces the health condition particularly stress, anxiety and depression were significantly reduced when socioeconomic and other factors were controlled.

With the research studies it is evident that green spaces impact humans positively.Thus, protecting the existing green areas and developing new green patches is vital to create health- supporting urban environments and can prove to be a long-term strategy for improving mental health issues.

This article was written by Deeksha Chopra.