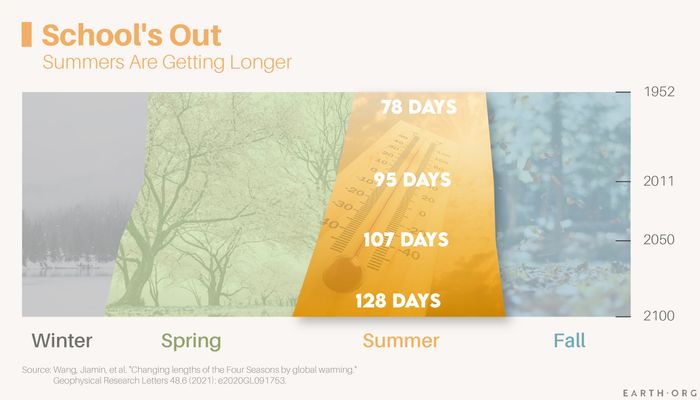 A February 2021 study, published in the Journal of Geophysical Research Letters, reported that seasons in the Northern Hemisphere are now changing lengths, all except summer becoming shorter.

They found that over a 60 year period, from 1952 to 2011, winters, springs and autumns shortened together by an average 17 days, which summer assimilated for itself. Modelling revealed that it could become another 12 days longer by mid-century, and 4 to 6 months long by 2100.

Our natural world is built around biological clocks. The body’s rhythm changes between night and day, and many animals, insects and plants depend on seasonal cues. Longer summers have the potential to throw these systems out of whack.

The effect on wildlife has already been observed: pollinators emerge out of sync with plant blooms they rely on for reproduction, threatening both parties. An exceptionally warm “false spring” in March 2012 lured vegetation out of dormancy before temperatures dropped again in April, killing many crops.

But it isn’t only early onsets and length, summers are also getting hotter. There’s a high probability that future generations will face up to 6 times more extreme heat events than ours, and up to 3 billion people could face temperatures beyond human tolerance by 2070. Some scientists have even warned that disease-carrying mosquitoes could expand their range both polewards and elevation-wise thanks to warmer nights. Along with this, scientists expect more droughts and floods, and an acceleration to sea level rise.

Where the Numbers Come From

The authors of the paper, Changing Lengths of the Four Seasons by Global Warming, looked through daily climate data from 1952 to 2011 and defined the start of summer as the onset of temperatures in the hottest 25% during that period. Conversely, winter was defined as the onset of the 25% coldest.

Governments should take stock of this information and prepare accordingly. Potential mosquito range increases have been modelled, and preventive measures need to be taught and promoted among the newly vulnerable populations.

Agriculture is also an area to keep an eye on. Freakish extremes happen and can be dealt with, but baseline changes could mean rethinking what crops are best suited to new weather patterns, and how infrastructure can be adapted.

As for summers becoming lethally hot, our actions now will determine the onset. Significant cuts in greenhouse gas emissions will buy time to adapt to or even avoid catastrophic levels of global warming.