Food Production: Recent History and Where we are Heading

A critical turning point in modern agricultural history was the onset of The Green Revolution, a series of international programs launched in the 1950s and 60s designed to increase crop yields around the world through modern farming practices to truly revolutionize food production.

By the early to mid 20th century, the world population was rapidly expanding, resulting in more hunger as traditional agricultural practices struggled to meet with rising demand. While industrialized nations intensified their production by using selective plant breeding and chemical fertilizers and pesticides, ‘developing’ countries without industrial farming methods struggled to feed a rapidly growing population. This triggered an international response in the 1950s led by the Rockefeller Foundation to establish programs to adapt industrial agricultural practices for use in developing countries.

Known as The Green Revolution (GR), the programs prioritized the growth of high yield varieties (HYV) of high calorie crops, such as wheat and rice, as an efficient means of increasing caloric intake. In many ways, the Green Revolution achieved what it had set out to do – expand modern agriculture to a global scale, increase food production, and combat world hunger. In fact, it is reported to have saved 1 billion people from starvation.

Two charts below illustrate this. The first graph shows how global population growth caused a rise in famine, which then ceased in the 1960s. The second graph shows the global change in the daily supply of calories from 1961, coinciding with the global deployment of the GR’s agricultural technologies. While the world population has more than doubled since the 1960s, hunger and famine has plummeted thanks to the food surplus generated by the GR. 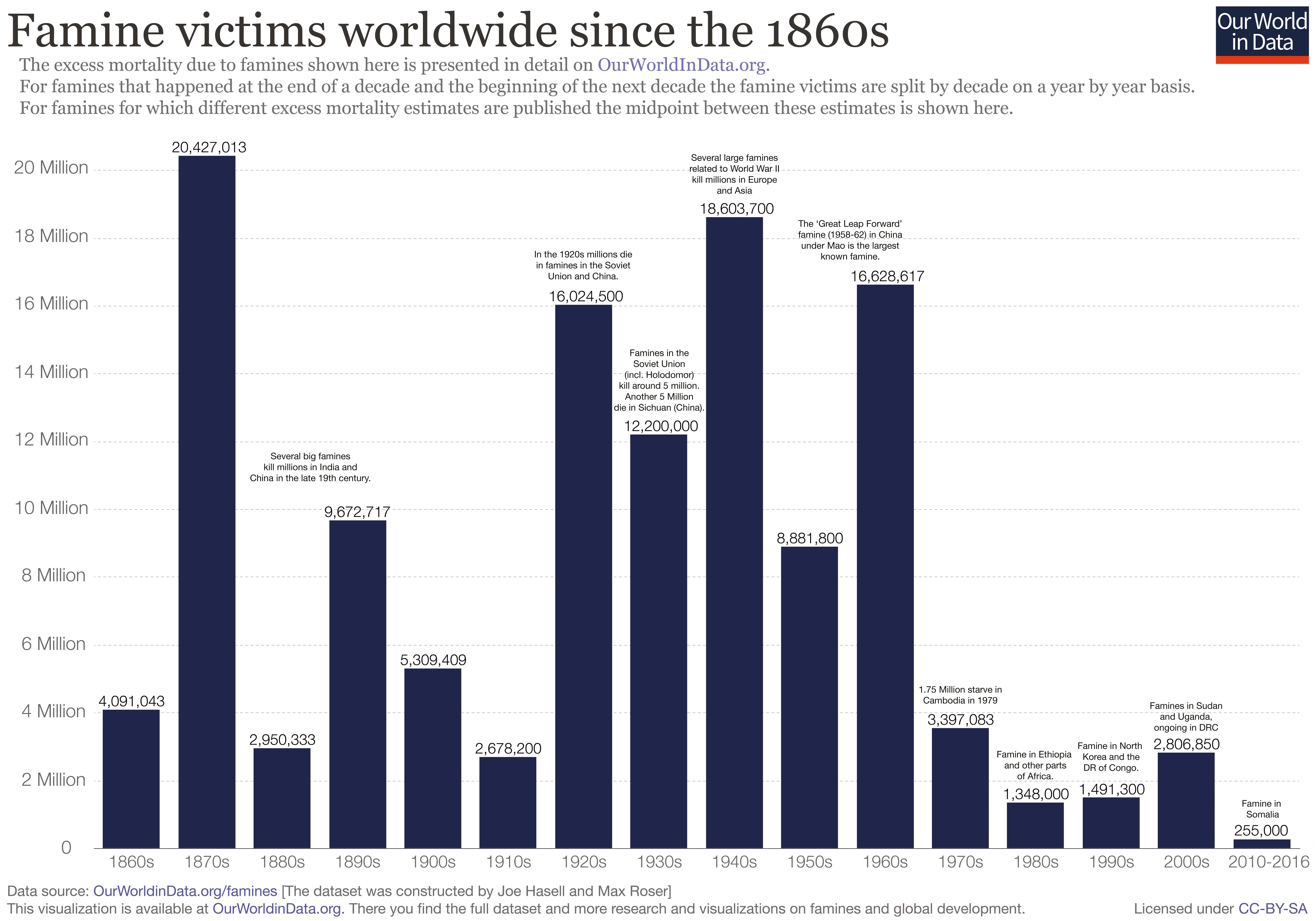 Unfortunately, prioritizing HYVs of calorie dense foods has had a number of negative unintended consequences too, including malnutrition and over dependence on chemical inputs,  presenting a threat to the future of food security.

From Starvation to Malnutrition

Thanks to the innovations of the Green revolution we grow enough food to feed the world 1.5 times over, yet malnutrition is the new problem.

As of 2017, 820 million people are undernourished  (10.8% of the world population) and obesity rates have tripled since 1975 (Rockefeller Foundation).

There is a misconception that “producing more calories will alleviate hunger”, says Timothy Wise, a senior researcher at the Small Planet Institute. But unbalanced, carbohydrate intense diets have created a new form of food insecurity in which people have access to the calories but not all the necessary nutrients.

Global fertilizer consumption today has risen ten-fold since the 1960s (FAO, 2017), while pesticide use has increased by 74% since 1990. Their use has certainly increased crop yields, but they come with negative environmental impacts. First, we often combine them with monocultures, leaving the soil bare after harvest until the next round. This allows wind and water to erode the surface where all the nutrients are contained. Second, erosion also carries leftover fertilizer into waterways, carrying it downstream to fuel algal blooms that can destroy ecosystems and poison humans. Furthermore, when chemical inputs are sprayed over crops they can seep into the group and contaminate groundwater supplies. In the EU, 38% of water bodies are under threat from agricultural pollutants, and in the US agriculture is the top polluter of rivers and streams.

A major issue is how the monopoly of the seed market has greatly reduced crop variety and makes it ever more difficult for farmers to turn toward other, more sustainable methods (The recent farmer riots in India are a symptom of the same ailment). We’ve reached a point where an estimated 75% of global crop diversity has disappeared since the mid 20th century! The expression “don’t put all your eggs in one basket” rings through our minds as we realize that we are one or two nasty plant diseases away from losing massive chunks of our food supply.

The best response to this threat is having our farmer vary their crops, increasing resilience to weather change and disease. Studies have proven the effectiveness of this approach, but it remains up to our governments to combat the gridlock imposed by private companies.

The global food system accounts for over 70% of the freshwater use, takes up half of the earth’s land, and is responsible for 25% of global GHG emissions. It produces enough food to feed the whole population 1.5 times over, and yet almost 11% of us are undernourished.

This article was written by Lola Robinson. Cover photo by Sean Paul Kinnear on Unsplash.