Water covers 71% of the Earth, yet only 3% is freshwater. Of this, 68% is trapped in ice and glaciers. What is left is theoretically enough to quench every human’s thirst, but its poor distribution and increasingly polluted state leaves many without access to safe water sources.

According to UNICEF and WHO, between 2010 and 2017, 2.2 billion people lacked access to safely managed drinking water services, representing one-third of the global population. In 2017, 785 million people remain without even basic drinking water services by collecting water directly from surface water. The WWF predicts that at the current consumption rate, by 2025, two-thirds of the population may face water shortage.

Nevertheless, what we see is a definite improvement between 2010 and 2017. The coverage of safely managed services increased in all regions, notably from 25 to 35% in developing countries. This remains quite low, but the progress is encouraging.

Source: WHO, Progress on household drinking water, sanitation and hygiene 2000-2017.

Inadequate water infrastructure causes huge freshwater leakage in both developed and developing countries. In the United States, 6 billion gallons of treated water is lost every day. There are around 240,000 water main breaks per year, responsible for over 2 trillion gallons of clean water loss. In Mexico, between 30 and 50% of water is lost through leaks in the inefficient and ageing pipe systems.

Shifts in rainfall patterns and large climatic oscillations, like the El Niño Southern Oscillation, can lead to severe droughts. In these cases, countries with enough funds will turn to groundwater pumping, which in turn can deplete aquifers that took thousands of years to fill.

But what do you do when the groundwater is contaminated?

Pesticides and fertilizers, industrial chemicals, toxic landfill compounds and even saltwater from sea level rise can contaminate these precious aquifers.

Another frequent problem is that of poor drainage systems in flood-prone areas. Places like Dhaka in Bangladesh, can have their water reservoirs contaminated by sewage overflow, leading to outbreaks of water-borne disease like cholera.

The lack of access to freshwater implies more than poor water quality and diarrhoeal diseases. It also directs to gender inequality and fewer educational opportunities. In a report conducted by the United Nations – The World’s Women 2015: Trends and Statistics, it revealed that the burden of water collection fell disproportionately on women. In Sierra Leone, 72% of households spend over 30 minutes per day collecting water, and 73% of households rely on females to fetch. This gender specific role significantly reduces educational opportunities of women and girls, which in turn increases long-term poverty. 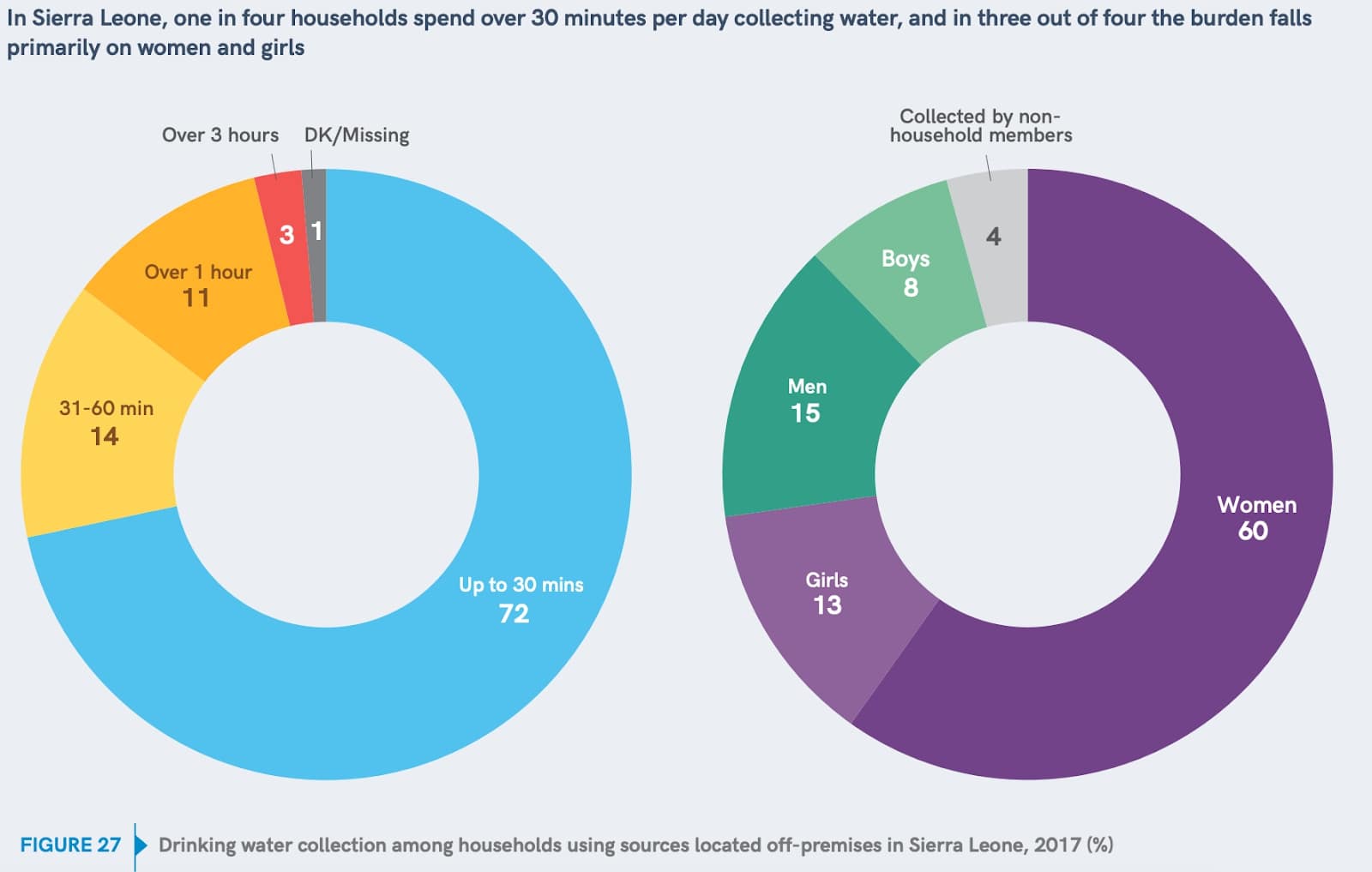 Source: WHO, Progress on household drinking water, sanitation and hygiene 2000-2017.

The freshwater crisis does not merely affect the health and well-being of humans, it is also intertwined with the widespread inequalities between men and women which is barely brought up by the society. Therefore, increasing access to freshwater is both a fight for basic human rights and a key to achieving gender equality.