Geoengineering: What is BECCS?

Bioenergy with carbon capture and storage, or BECCS, has become one of the most crucial technologies for reversing the past 200 years of carbon emissions. Though it has yet to be implemented on an effective scale, its cost-effectiveness is turning into the first viable negative emission technology.

If greenhouse gas (GHG) emissions stopped today, those already present in our atmosphere would continue to increase global temperatures for another decade. Since we are unlikely to decarbonize our society by tonight, some advocate using large-scale, atmospheric cooling techniques. This further tampering with our climate’s natural function is called geoengineering. Long considered taboo, some examples include sending giant mirrors into space, or disseminating small particles in our atmosphere to reduce incoming sunlight. Danger lies in our inability to properly assess the consequences of such measures. However, a sub-category of geoengineering has emerged as safe, feasible and cost-effective: negative emissions technologies (NETs).  Great news, since it is now agreed upon that we will probably break the internationally agreed limit of 2C without NETs. 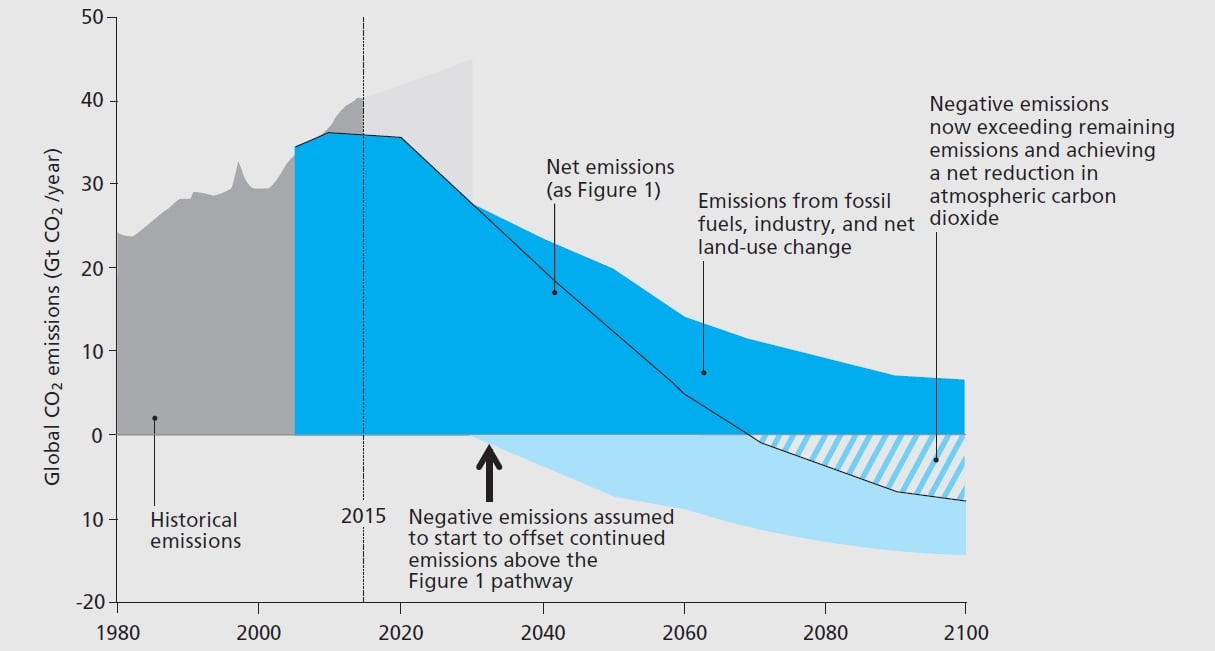 Figure above corrected for the inclusion of negative emission technologies.Source: UNFCCC.

NETs include any technology that effectively removes carbon dioxide from the atmosphere. It can be as straight-forward as planting trees, and as surprising as spreading pulverized rock onto soils. BECCS stands out as the most likely to become widely commercialized in the upcoming years. It is part of the broader carbon capture and storage technology group, and consists in the combustion of biomass (like crops and biological waste), while capturing the emissions and storing the below ground.

The energy produced through BECCS can be directed toward a variety of uses, but the key feature is the elimination of GHG addition to the atmosphere.

Biomass is derived from a residual product like sugar cane waste, or obtained from dedicated “energy crops”, which are usually rapidly growing plant species. We are currently testing algae cultivation and municipal organic solid waste as fuel.

It can either be combusted, or converted to gaseous liquid or fuels through digestion or fermentation.

Development has been slow. As of today, there are only six functional BECCS facilities worldwide, four in the US, one in Canada and one in the UK. There are others underway, notably in Norway, France and in Japan, but the cumulative carbon storage capacity of BECCS is orders of magnitude lower than the current global emissions. Of course, this isn’t a reason not to pursue development, as they are still considered cost-effective. Especially considering the 58 Gigawatts of “clean” energy these plants can provide each year, and the opportunity for integrating waste disposal to the process. Japan is already burning 70% of its waste for energy, Norway 53% and the UK, 13%. Further, biomass combustion provides 6% of total thermal energy for cement production worldwide.

The slow valuation of carbon emissions in our economies could make BECCS a huge economic boon, and sectors with foresight could get a headstart on the bounty.

What are the Constraints?

Literature reviews show that the limiting factor of BECCS is not technology or cost-efficiency, but rather fuel stock. Classical waste sorting is too inefficient to provide large amounts, and dedicated bioenergy crops aren’t consequential enough to maximize the potential of BECCS. According to the Carbon Sequestration Leadership Forum, we need an approximate 300 to 700 million hectares (a third of all arable land) of land to grow enough bioenergy crops for BECCS to effectively change our emissions pathways.

If BECCS were combined with better waste management, however, this constraint could be overcome. Carbon pricing-based financial incentives may be enough to drive legislators in this direction.