Green walls can breathe life into the often drab urban concrete jungle. Their rise in popularity may be accredited to this aesthetic appeal but this architectural feature has a very functional role in temperature regulation, which in turn reduces energy consumption and greenhouse gas emissions. Further environmental benefits include increased biodiversity and enabling greater building recyclability.

What are green walls?

Also termed living walls, vertical gardens or plant walls, green walls are essentially walls that are covered with plant life. Examples can be seen in this list of eight walls from around the world compiled by Green Matters. As an external feature, they are a form of cladding used by developers to make their buildings visually appealing. As interior features, their soothing effects have been linked to reducing stress levels in office workers and increasing productivity (Naava, 2017). Green walls thus embody sustainability, not only for the building itself but also those who use it, and have subsequently become an important element of the green building or sustainable construction movement, which has been growing since the early 90’s (Kilbert, 1994).

As the world population continues to migrate to cities, a trend which is expected to reach 60% by 2030 (Figure 1), the built environment continues to be a large contributor to climate change and is estimated to account for 40% of global energy use and 30% of energy-related greenhouse gas emissions (United Nations Environment Programme, 2020). Furthermore, it has been calculated that resource consumption is at levels where buildings account for 90% of the world’s extracted material. This converts to vast volumes of waste production, with little building material ever being recycled or reused (Kibert, 2004). 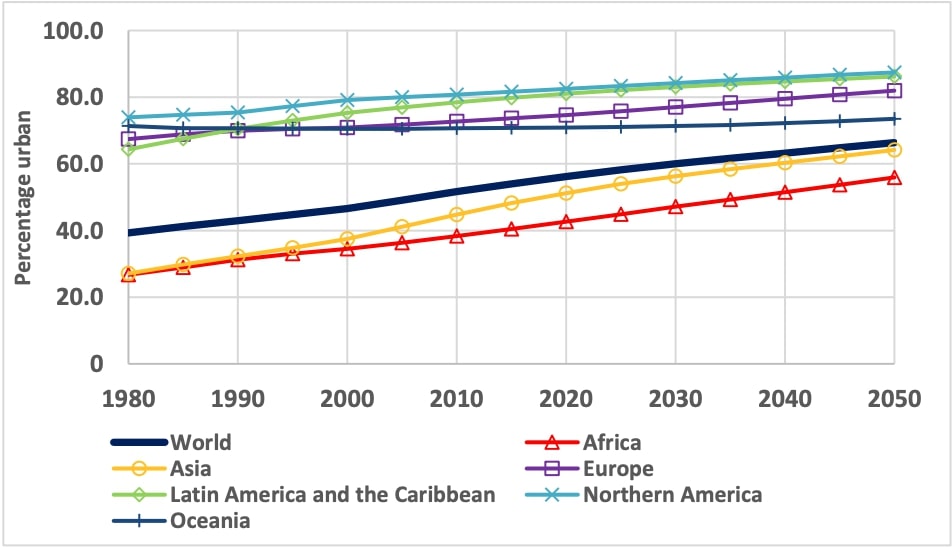 The role of green walls

Green walls in isolation cannot solve the problems created by urbanisation. They can, however, form an important part of a wider strategy to increase the sustainability of the built environment: reducing noise pollution, increasing air quality and creating cost savings are some of the benefits to humans. The following does not cover these but rather focuses on the role green walls have in mitigating climate change.

Green walls can help decrease the speed of climate change in a number of ways. Primarily, they reduce the energy consumption of buildings by creating microclimates within the urban environment that help to regulate temperatures. In summer months it has been found that external greens walls reduce surface temperatures by up to 12 oC (The Environmental Magazine, 2020). 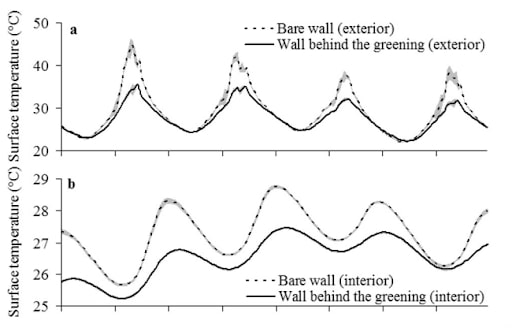 Furthermore, through a process called evapotranspiration that cools the air, greenery can help mitigate the urban heat island effect. This is when heat generated by human activity is trapped in narrow roads and concrete structures, causing urban temperatures to be 3-4oC higher than rural locations (Natural History Museum, 2020). This in turn drives increased usage of cooling systems, which are energy intensive and consume fossil fuels. Temperature regulation is not just limited to heat reduction. In the winter, green walls act as an insulating layer for the building, and thus heating demand can also be reduced (The Environmental Magazine, 2020).

More plants in the world is clearly a good thing when considering climate change. These living organisms absorb and store carbon dioxide, a primary greenhouse gas. With ever denser cities, space available to greenery becomes ever more limited as the need to provide shelter, as a basic human right, continues to grow. Building construction destroys biodiverse ecosystems, itself an act that increases carbon dioxide emissions. There is a strong relationship between low biodiversity and climate change, as evidenced in the Intergovernmental Science Policy Platform on Biodiversity and Ecosystem Services (IPBES, 2018). Vertically incorporating a wide variety of plants onto the walls of buildings may not fully replace the lost biodiversity caused by urbanisation, but they can at least provide a partial solution when there is a lack of traditional parks, as buildings jostle for limited space.

Whilst not directly linked to reducing climate change, one cannot discount the aesthetic appeal of green walls. Old buildings that would have once been demolished can be given a new lease of life with the inclusion of green walls, a prime example being the CaixaForum Madrid that is housed in the old Mediodia electric power station. By recycling existing structures, the real estate industry can reduce energy consumption and waste creation. Cement production alone, for example, is responsible for 4% of human-created carbon dioxide emissions (CO2 Human Emissions, 2017). A study by the Royal Institute of Chartered Surveyors (RICS, 2017) found that by practical completion, a typical office building will have emitted 35% of its whole-life carbon. This is even higher, at 51% for residential buildings. These percentages can be significantly reduced by retrofitting rather than demolishing and rebuilding.

The urban environment risks falling into a vicious cycle. As temperatures rise, demand for cooling systems will increase, in turn further increasing temperatures and so on. As natural temperature regulators, green walls can help break this cycle whilst improving the sustainable credentials of the real estate industry.