Greenland’s ice sheet, the second largest on earth, experienced all-time high mass loss in 2019 due to the altered climatic patterns of the arctic region. The magnitude of the loss surpassed the previous record of 464 Gigatons (Gts), measured in 2012, by 68 Gts  resulting in a net mass loss of 532 Gts in a single year. In other words, the ice loss from Greenland was responsible for a total sea level rise of 1.5 mm only in 2019.

Last year’s  shrinkage significantly exceeded the average ice loss of 235 Gts detected from 2003 when more precise NASA satellite gravity measures started to be applied. In addition to the total mass loss a new daily record was also set on the 1st of August, 2019 as 12.6 Gts of ice melted into the ocean accounting for a worldwide sea level rise of 0.11 mm on a single day.

The ice gain/loss balance in Greenland started to be disrupted in the beginning of the 1990s and the mass loss only has been accelerating since then. This trend has eventually turned Greenland’s ice sheet into the single largest contributor to sea level rise in the 21st century.  Last year, the meltwater runoff from Greenland’s ice sheet was alone attributed to the 40 % of all sea level rise worldwide which highlights the significance of the issue. The disappearance of Greenland’s complete ice sheet would contribute to a total of 7.4 meter sea level rise which would have devastating effects on the coastal regions worldwide.

Numerous weather anomalies were recorded in 2019 which led to the significant shrinkage of ice throughout the island. The colder anomalies were observed after two years of moderate ice loss from the sheet (2017-2018) compared to the decades’s record breaking meltdowns from 2012. The year of 2019 was characterized by warmer surface air temperatures during summer and spring and colder temperatures during winter and autumn in comparison to average temperatures in respect to the period of 1981-2010. The level of surface albedo of the ice sheet (the ability of the surface to reflect light) also dropped to second all-time lowest (77.7 %) last year. Moreover, the number of days with melting anomalies and the area affected by melting (95 % compared to average 64%) were exceptionally high in 2019 which all manifested in the augmented meltwater runoff from Greenland’s ice sheet. 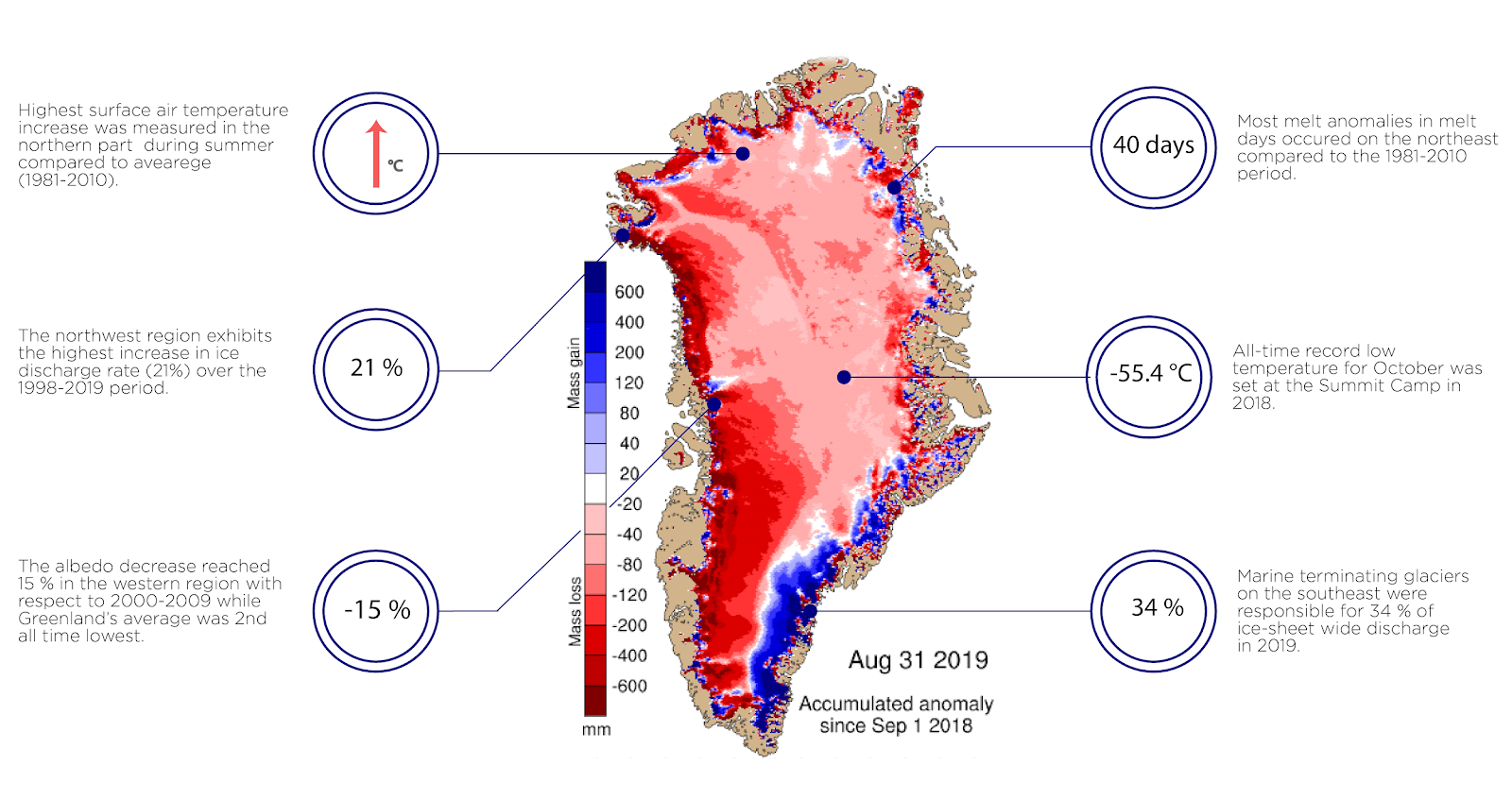 The map shows the accumulated anomaly between 1st of September 2018 and 31st of August 2019. During this period various anomalies were detected in different regions of Greenland (Modified after Danish Meteorological Institute’s polarportal).

Changes in the climatic environment are the main causes behind the weather anomalies and the higher rate of ice sheet mass loss. The more frequent occurrence of stable warm air mass over the western shores of Greenland during summer months contributes to a more prominent melting of the surface ice. In addition to the warmer surface air, mass loss also occurs due to higher ocean temperatures, accelerating the melt and calving of ocean-adjacent icebergs.. Most of the ocean-driven melting is occurring in the western and northern parts of the island, but all of Greenland’s coastal ice sheets are melting at 14% higher rate compared to 1985-1999. The elevated level of freshwater in the ocean following meltdown has further adverse impacts on ocean properties and currents, local ecosystems and nutrient and sediment fluxes. All these phenomena are expected to increase due to the warmer climate and warmer ocean temperatures.

The alarming rate at which Greenland’s ice has been disappearing can result in a total sea level rise of 40 centimeters by the end of the century combined with the milder, yet accelerating meltwater runoff from Antarctica. This scenario is aligned with the most extreme forecast depicted by the International Panel on Climate Change (IPCC) and would threaten the lives of hundreds of millions of people in the coastal regions due to severe coastal flooding and more frequent storm surges. This indicates scientists to rethink the current scenarios and outline more extreme climate change projections.

Many scientists believe that we have already surpassed the tipping point and there is no way to reach the ice mass gain/loss equilibrium in Greenland as snowfall during the fall and wintertime is not able to replenish the diminishing ice. Ice loss in 2020 has been more moderate than the record-setting previous year, but scientists warn that there is a clear accelerating trend and we will certainly face worse events in the upcoming decades.