Hotspots: US Dams Under Pressure

The USA’s dams, mostly built before or around the second World War, are growing old and increasingly hazardous. We often overlook that extreme weather conditions, hot, cold or wet, take a serious toll on these structures. According to a paper by Suarez-Gutierrez et al. (2020), Texan dams could find themselves in temperature hotspots with 2°C or 4°C global warming.

There are around 91,000 dams in the United States, impounding around 17% of the rivers in the nation. Dam construction in the US truly began in the second half of the 19th century, and peaked with the post-World War II economic and demographic surge. The average age of these dams is therefore around 57 years old, of which 15,500 were identified as extremely hazardous in 2018.

The National Inventory of Dams, first published in 1975, breaks down its criteria as follows;

There have been many dam failures in US history, and although there is no exhaustive list, we know at least one has occurred in each state. There are a few ways these failures come about, the most common of which is water surplus after heavy downpour.

The St. Francis Dam incident which left 431 dead in March 1928 spurred the nation’s first dam safety legislation in and around California. It then took another 50 years and many disastrous failures for President Jimmy Carter to instruct the US Army Corps of Engineers to establish a dam safety program.

Climate change and its plethora of effects on our environment, infrastructure and lifestyles have only been brought under the spotlight in the past 20 to 30 years. It stands to reason that safety management for older US dams was carried out with the assumption that our climate would remain stable.

A 2018 study (Fluixa-Sanmartin et al.) explains how the current and future alterations stemming from climate change will probably affect dam safety around the globe. The two most important factors to consider are more frequent extreme weather events and excessive rainfall. We need to repair and prepare these dams accordingly, but climate predictions remain quite uncertain. Dam safety can therefore be reevaluated and adapted to a range of scenarios, from best to worst.

Here, we run an brief analysis on which Texan dams could experience dangerous weather extremes, to illustrate how dangerous things could get.

Maximum absolute summer temperatures under a 4°C rise in global mean surface temperature. The simulated maximum temperatures represent the 0.5% most extreme at each grid cell. Map by Keir Murdo.

For our analysis, we use the Max Planck Institute General Ensemble (MPI-GE) climate model. It is a comprehensive, state-of-the-art model which allowed Suarez-Gutierrez et al. (2020) to make predictions of the most extreme temperatures the globe could experience under different climate scenarios. We will use the most unlikely (0.5% chance of occurring), yet most extreme events that could occur.

Based on this model, the US South and Midwest might experience extreme temperature spikes, both in a 2°C and 4°C hotter world. The Texan dams we will be looking at are mostly over 50 years old and in dangerous condition. 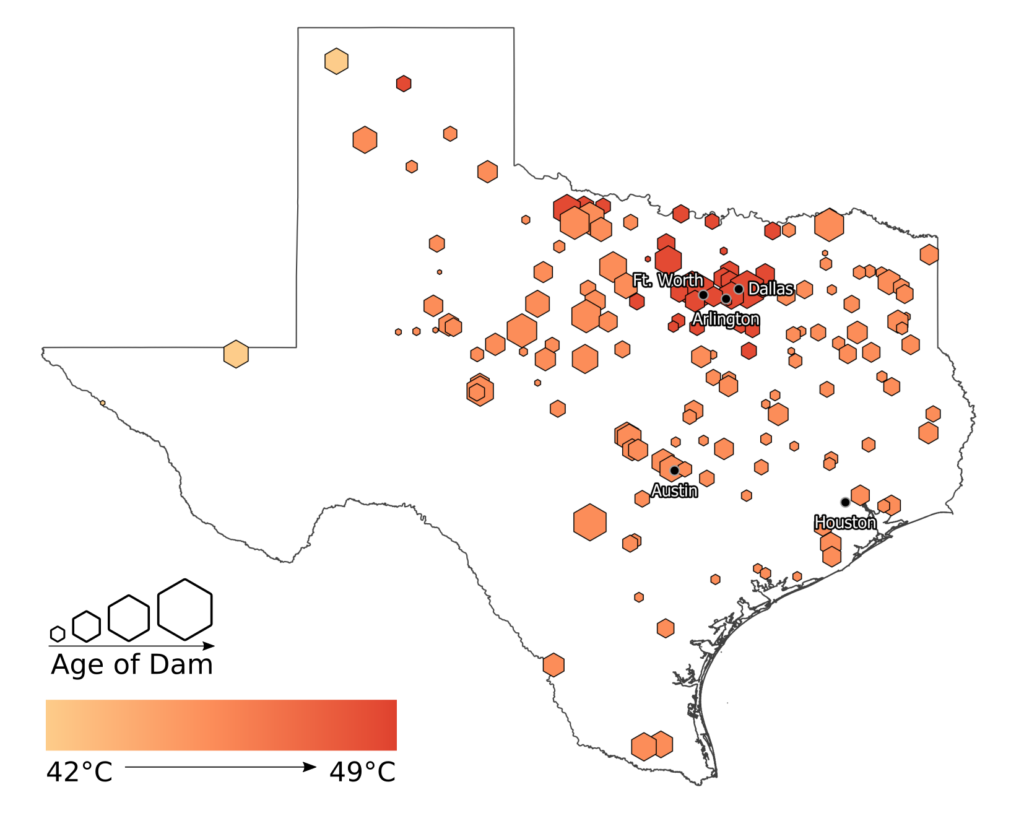 As you can see above, with a 2°C rise, 115 Texan dams could suffer +45°C temperatures; the rest are within the +40°C zone. Studies have shown that the structural integrity of concrete dams is strongly affected by temperature and solar exposure (Fluixa-Sanmartin et al. 2018). Since the MPI-GE models temperature spikes and extremes, there is a chance that an acute episode could suddenly weaken one of these dams.

The hotspot around the cities of Dallas, Ft. Worth and Adington is cause for concern as dams are both old, and could experience the most heat. This means that hundreds of thousands, maybe even millions could be at risk of a freak climate accident, unless preventive action is taken.

The picture becomes even more drastic with 4°C global warming. 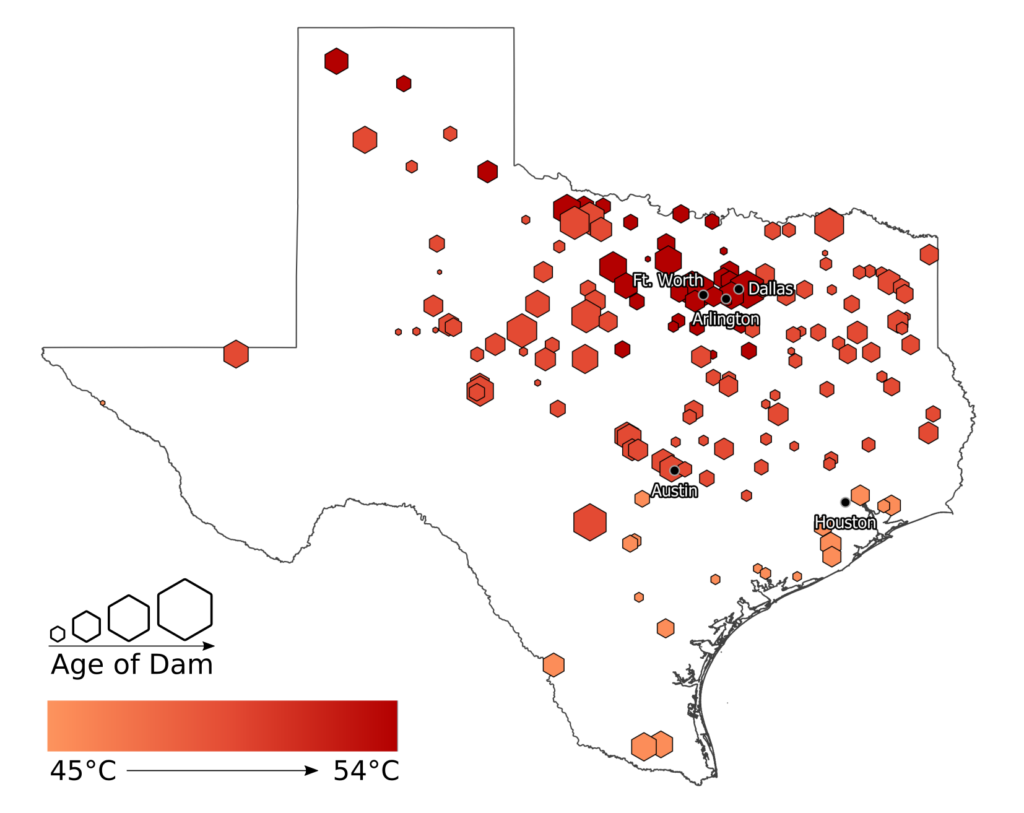 Above, 60 dams are in +50°C hotspots, while 142 dams are within +45°C zone. In such conditions, officials will have two options: undergo massive repair and renovation (or controlled demolition) of the nation’s dams, or conduct huge population displacement away from the risk areas.

Rehabilitating the nation’s dams is estimated to cost over US $65 billion. A hefty price, but this problem will have to be dealt with, one way or another.