Climate change is real. Unfortunately, we are past the stage where we can prevent it. The only thing we can do now is to limit its impact by preventing further increase in greenhouse gas emissions and enhance carbon sequestration via “carbon sinks”. More knowledge allows for better decision-making, and satellites have revolutionised our understanding of climate change.

Satellite remote sensing allows us to collect data and information about earth surface, oceans and the atmosphere at several spatio-temporal scales in a timely , regular and accurate manner. Satellite data help us understand the climate system and identify ways to mitigate climate change. Various organisations like NASA, NOAA and ESA use satellite data to monitor greenhouse gases concentration in atmosphere, weather patterns, vegetation health, melting of glaciers and polar ice, bleaching of coral reefs, ocean acidification, changes in wildlife migratory patterns, and many other environment indicators. Satellites not only monitor the global environments,  its technological innovations such as miniaturization of sensors, high-speed data transfer, and upgraded storage capacity have revolutionized climate science. Here are a few examples that illustrate how.

Deforestation, a significant source of global climate change accounts for around a quarter of global greenhouse gas emissions. Satellites monitor forest cover worldwide generating global datasets to predict trends and areas where deforestation occurs. As per research, depleting forest cover in old, carbon-rich tropical rainforests like those in Brazil and Indonesia is one of the worst sources of emissions. 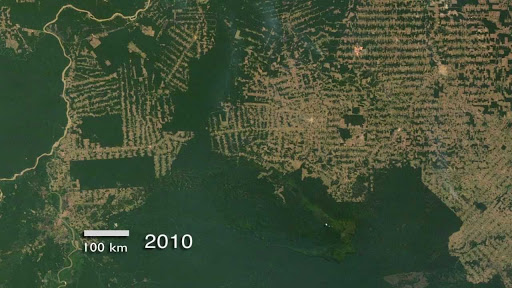 According to NASA Earth Observatory, once home to 208,000 km² of forest (about 51.4 million acres) , the State of Rondônia in western Brazil is now one of the most deforested parts of Amazon.

With the breaking of a huge iceberg away from the Antarctic landmass in 2007, the world map was changed forever. Copernicus Sentinel-3 Delay-Doppler altimeter was the first mission to study the ice sheet patterns over Antarctica. For the first time, we were able to measure volume change, mass balance and sea-level rise contribution in vast and inaccessible regions. Satellites have thus allowed us to study the cryosphere, one of the most fundamental and influential factors of climate change. 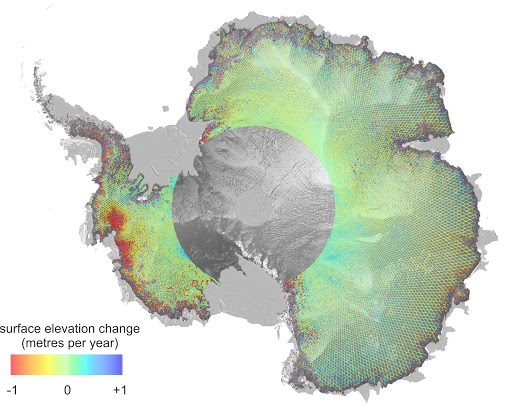 Because of increasing global temperatures, coral reefs are both the world’s most biodiverse and most threatened ecosystem. This is due to a phenomenon called bleaching, where corals lose their symbiotic zooxanthellae (algae) at higher water temperatures.

The satellite image above shows how climate change is affecting the world’s ocean temperatures, giving us insight on which coral reefs are most at risk and why.

A NASA satellite was used to track the flooding due to hurricane Florence, and the images showed how the dark, polluted water from the rivers was flowing into the Atlantic ocean. 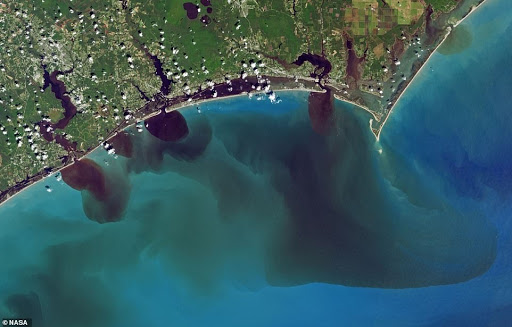 Another problem that is less related to climate change and more to environmental degradation is plastic pollution, which can also be tracked with satellites. It is predicted that by 2050 there will be more plastic in the ocean than fish. The European Space Agency’s Sentinel-2 satellites can distinguish plastic debris from other materials, it’s concentration, movement and even sometimes origin with high accuracy. With other technological innovations – including drones and high-resolution satellites – it will be easy and quick to monitor global marine plastic pollution, thus helping clean-up operations and regulation. 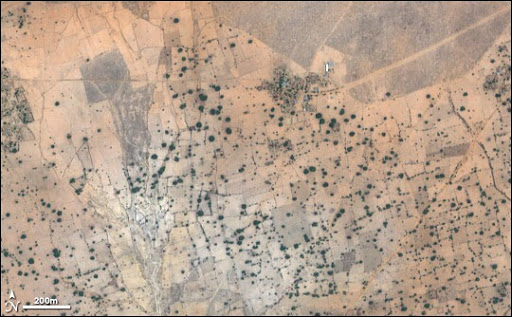 According to The United Nations Convention to Combat Desertification (UNCCD), desertification is now a global social and environmental problem. Desertification referred to as land degradation – through soil deterioration, erosion and loss of vegetation- in arid, semi-arid and dry sub-humid areas due to global climate variations and human activities. Using satellite data early information on areas at risk and under vegetation stress due to environmental conditions enables remediation or reversal of dryland desertification to a large extent.

This article was written by Deeksha Chopra.