Efforts on controlling illegal poaching in Africa in recent years may be rendered vain by this year’s pandemic and ongoing conflicts. As security forces diverted to maintain the health and security of their nations, poachers are getting easy access into protected areas.

Six elephants were killed by poachers on June 4th this year near Mago National Park in South Ethiopia. With only 3,000 elephants left in the country, down from 10,000 fifty years ago, these incidents are taken seriously. However, local authorities showed no surprise due to the current situation and heightening human-elephant conflict.

Here, we focus on the possible relationship between illegal hunting and the level of stability in relevant areas. There are two species of elephant in Africa, namely, the African bush elephant and the smaller African forest elephant. They mainly dwell in sub-Saharan Africa, in places like the Central and Western African rainforests or the Malian Sahel Desert. Their range is thought to have dropped from 25 to 16% of the continent between 1995 and 2007 alone. 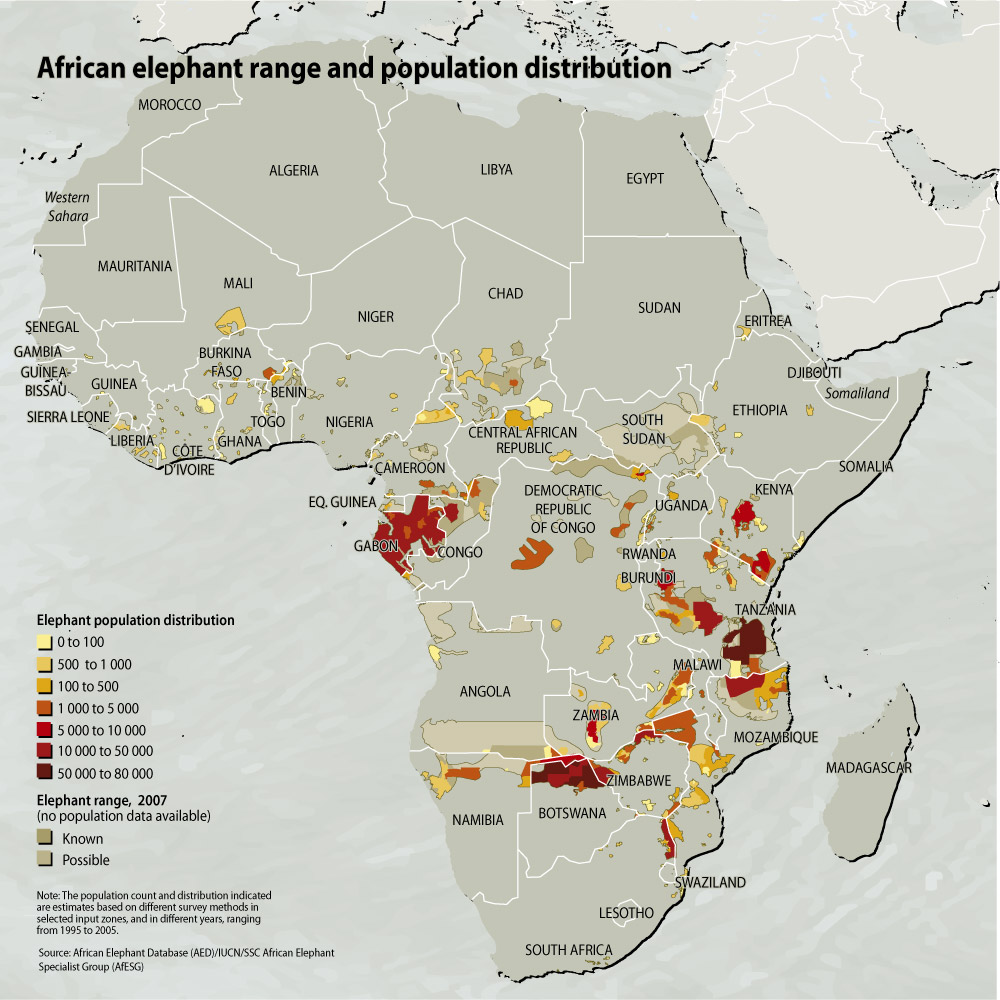 Elephant core ranges and distribution. Some small groups can be found outside these areas. Source: GRID Arendal 2013, Elephants in the Dust – The African Elephant Crisis. Cartographer: Riccardo Pravettoni.

The driving factor of this decline is habitat encroachment due to increased human population densities, but illegal hunting is increasingly problematic.

A concerning trend has been discovered under the Monitoring the Illegal Killing of Elephants (MIKE) programme by CITES. In 2006, the Proportion of Illegally Killed Elephants (PIKE) levels was at 0.5, meaning that about half the elephant carcasses encountered in MIKE survey sites were reported as illegally killed. In 2011, however, PIKE levels had risen to 0.9. The conditions were especially worse in areas of Central and Eastern Africa.

Political instability and conflict seem to be closely correlated with the increased poaching activity. The red and yellow dots (representing conflicts) peppered on the map to the right closely resemble the patterns of the high PIKE levels in the left panel, especially in Nigeria, Congo, Uganda and Rwanda.

Another factor, linked either by cause or effect to conflict’s role in this sad affair, is ivory trade. 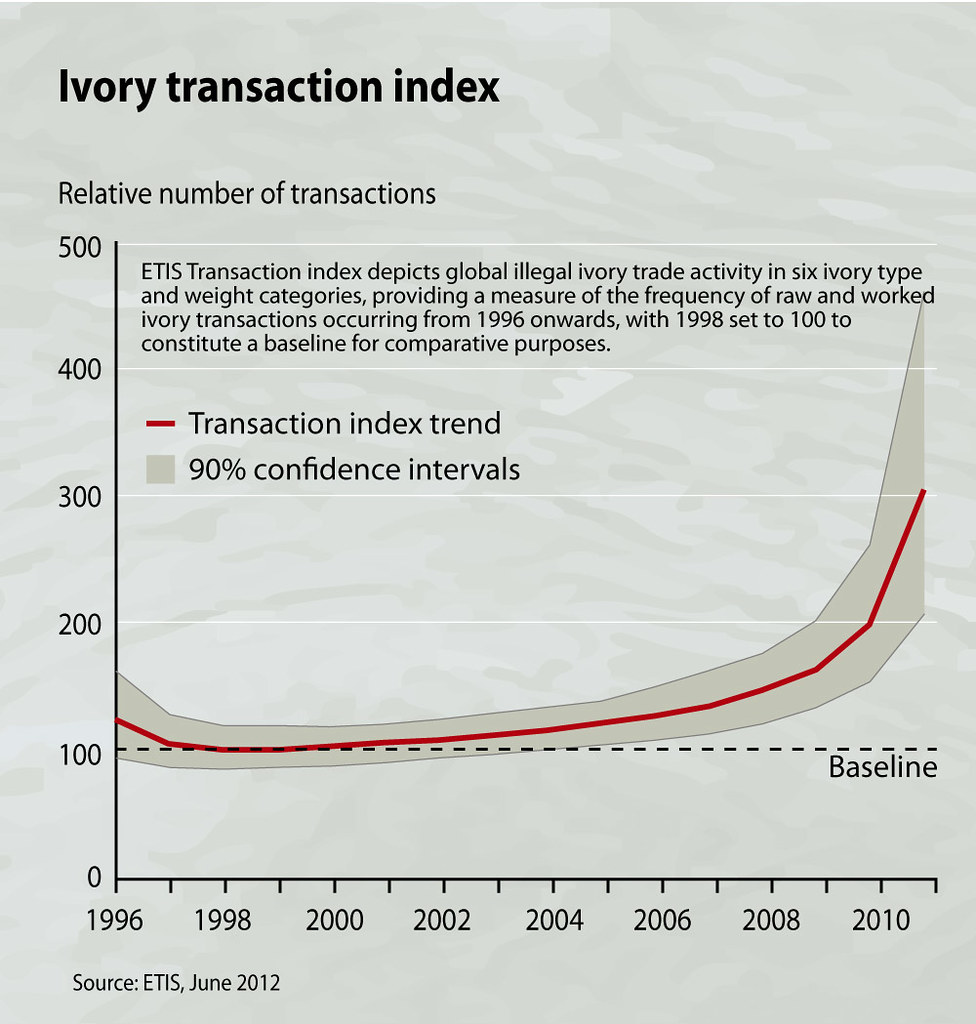 Concurrent with increased poaching is a higher amount of illegal ivory transactions, either by response to demand or thus creating it. Large scale ivory seizures by law enforcement allow some estimation of the market trends, and areas with high demand. 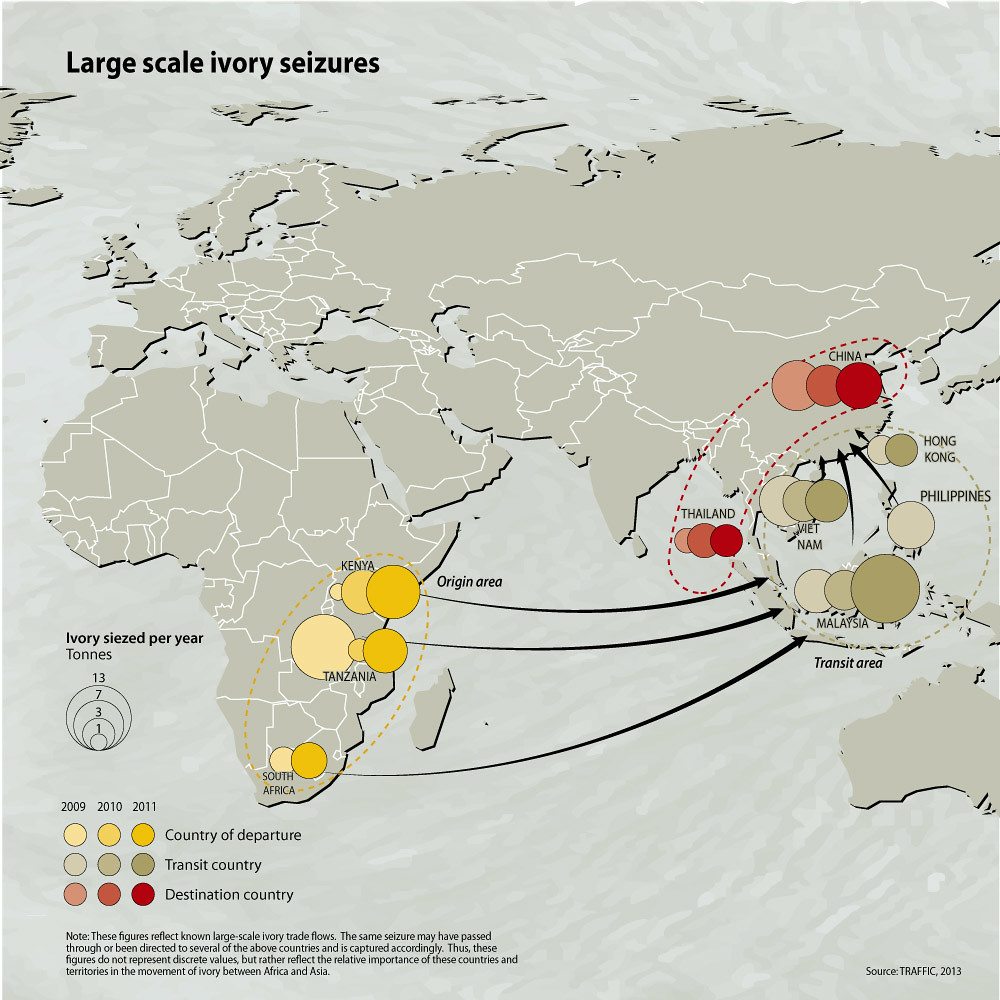 The challenge of conservation is already difficult due to human encroachment on nature, and the African continent’s political instability and conflicts only make this harder. Elephant populations are likely to keep suffering as a consequence, and it is difficult to ask developing countries to extend their resources toward anything other than the well-being of their citizens. We must intervene and work as a global society to help save what is left of the natural world we all depend on.

Photo by AJ Robbie on Unsplash