Too Hot To Live: Climate Change In Saudi Arabia

Nineteen of the twenty hottest years on record have occurred since 2001, not including 2020 which is on track to top the list. Now, research has found that Saudi Arabia could become too hot to live in by 2070.

As a species, we have historically avoided living outside of mean annual temperatures (MATs) between ∼8°C to 20°C. MATs above 29°C, found only in parts of the Sahara and Saudi Arabia, are generally considered too hot to live in but there are always exceptions. The hottest inhabited place on Earth today is the city of Mecca in Saudi Arabia, whose MAT stands at 30.5°C, and stays above a 34°C average between May and September. It receives an average of 2 million Muslim pilgrims each year, densely packed under scorching temperatures that can reach 54°C.

A decisive factor in whether temperatures go beyond human tolerance is humidity. When high enough and combined with extreme heat, it can inhibit the body’s ability to cool itself off through sweating. With the exception of its western coast, the Kingdom of Saudi Arabia has an arid desert climate with extreme heat during the day, replaced with low temperatures at night and very little rainfall. Lower humidity makes the heat more bearable to a degree, but even healthy, fit individuals need to avoid more than 15 minutes exposure to peak summer heat.

Hotspots are concentrated along the Southern Red Sea coast, where temperatures are as bad as it gets, so global warming won’t mean higher temperatures, but rather longer periods of intolerable heat. Some places stay cool, like the government officials’ summer favorite, Riyadh (MAT 28°C), though most cannot afford this luxury. Climate change is set to level the playing field by making over half of Saudi Arabia as hot as today’s Sahara by 2070. 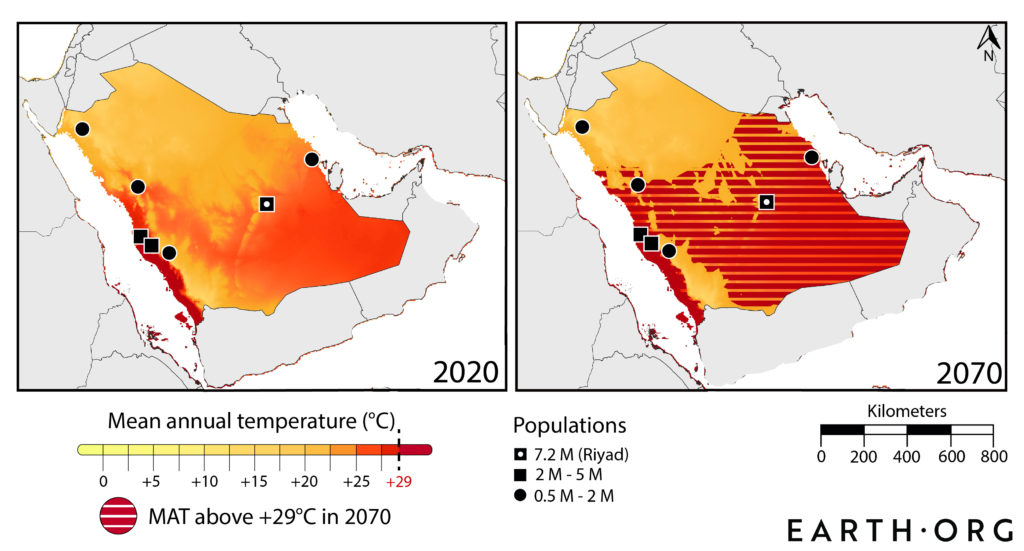 The Saudis haven’t “grown used to” these conditions and simply managed, but rather have developed the necessary infrastructure to counter the problem. Most people can move between home and work without ever leaving an air-conditioned space. Ironically, emissions for such extensive AC networks are adding to the problem, although the country is considering more efficient systems that could significantly reduce environmental impacts.

There is still a relatively large proportion of Saudi Arabians living in rural areas, where heat mitigation comes through smart building and street design, or traditionally vetted nomadic strategies. These people represent a more vulnerable segment because AC may not be accessible to all of them. 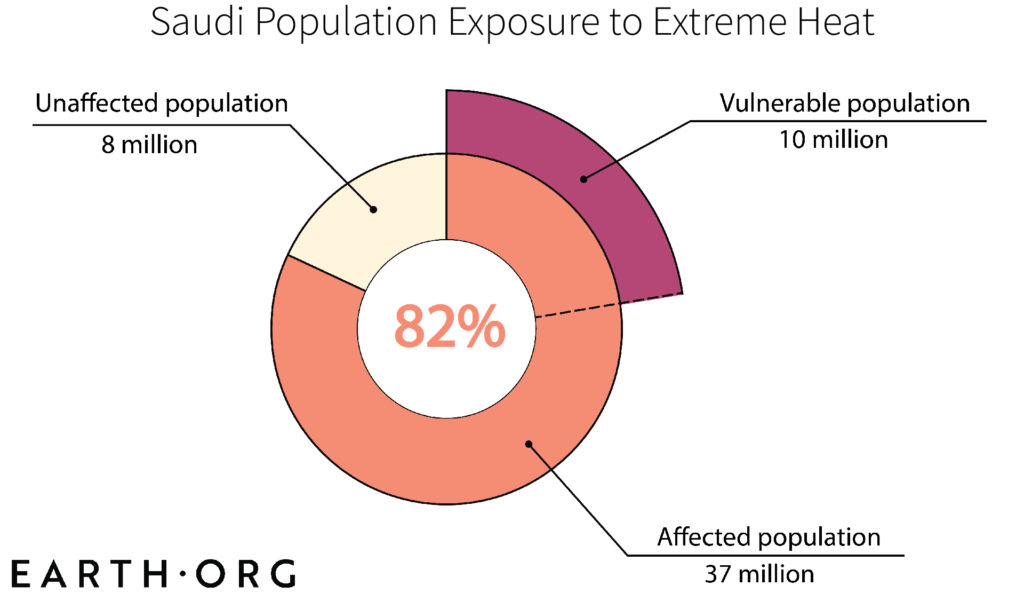 Proportion of Saudi Arabians exposed to MATs above 29°C, with the portion of those highly vulnerable due to decreased access to heat mitigation. Population numbers based on UN predictions for population growth by 2070.

Of course, it is likely that the Saudi government will implement AC for all of its inhabitants by 2070, thus fixing the problem. But picture a world in which you spend 5-6 months entirely indoors because your country has become Mars on Earth. It is also reasonable to imagine that the agriculture and fishing industries will take a severe hit, if not disappear entirely. This would leave the Kingdom dependent on external aid, while it continues to warm our atmosphere with its indispensable AC networks. Things will get hairy quite fast if we reach this point, so let’s make it our responsibility to learn, educate those around us and act where we can while there is still time.