Most threatened by bushmeat hunting are mammals, of which only 2% of species are resilient to the increasing hunting pressure. Demand for bushmeat is continuously rising due to increasing human populations, lack of alternative protein sources and the emergence of improved hunting techniques. On top of its relevance for subsistence, bushmeat provides an important income source for rural communities due to its high trade value. The economic implications of bushmeat hunting are relatively high. In Cameroon for instance, the bushmeat sector employs around 552 000 individuals, produces 87,800 tons and sales in rural areas can reach up to 44,2 million euros. 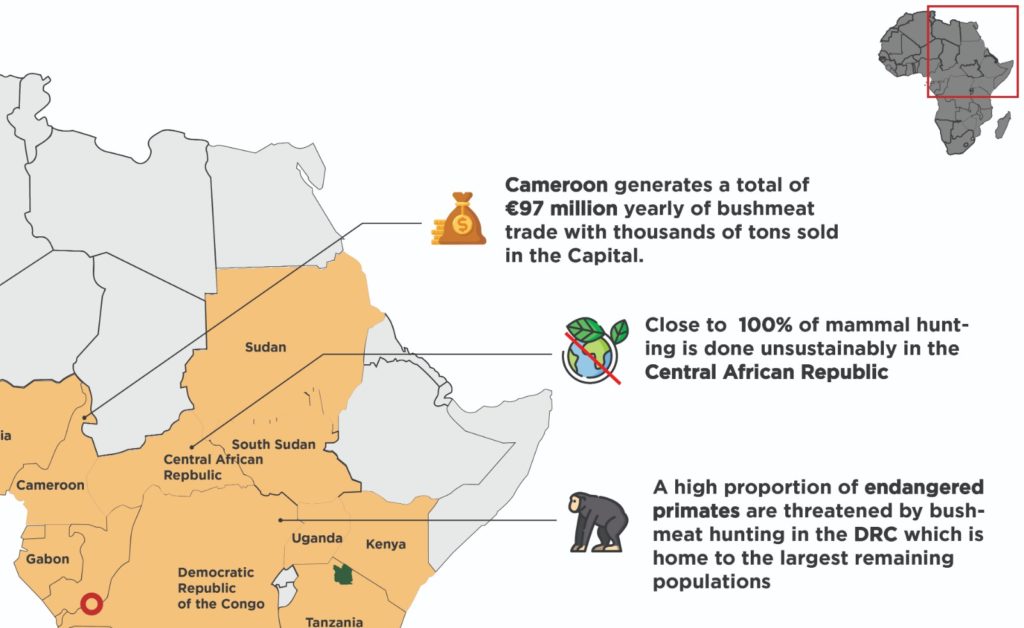 Bushmeat hunting is also one of the biggest contributors to the spread of zoonotic diseases. These are particularly dangerous for humans, as demonstrated by the 2013 ebola outbreak or the current Covid-19 pandemic. Habitat reduction and increased, unregulated wildlife hunting is significantly increasing our contact with animal reservoirs and enhancing the chances of transmission. Conservationists have attempted to halt widespread bushmeat hunting practices and trade, but it is unlikely to stop until the root cause is solved: people rely on bushmeat for food. 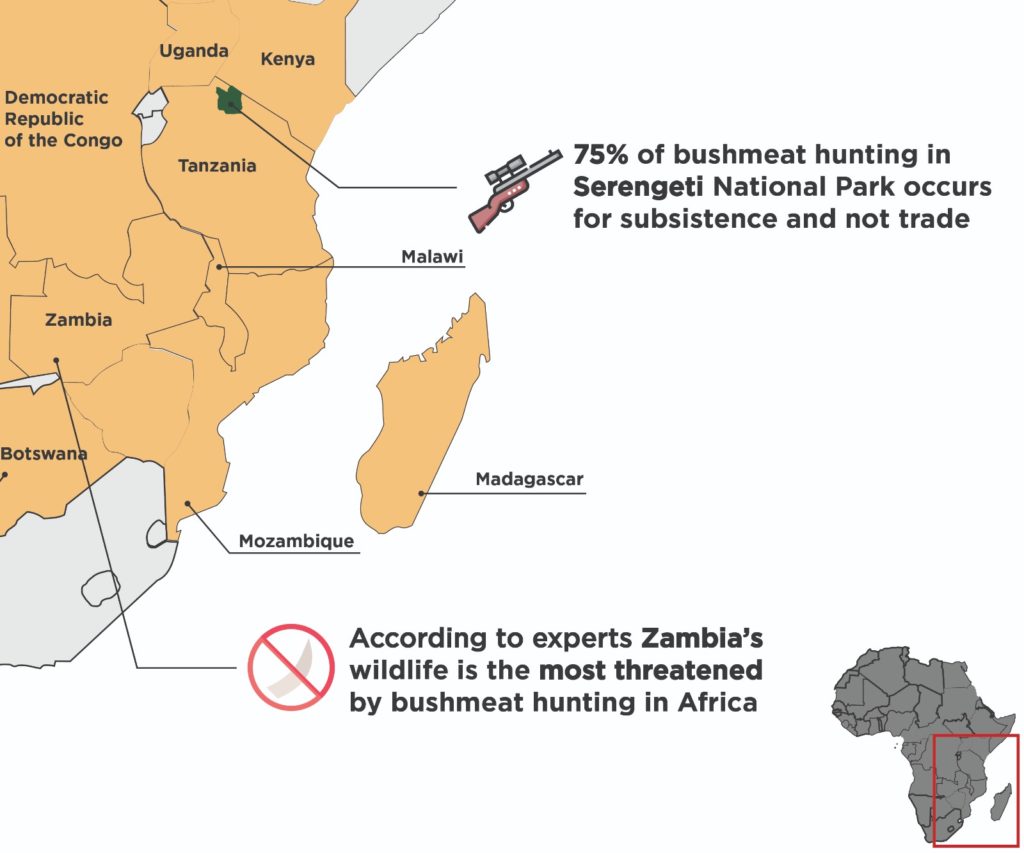 Africa’s bushmeat consumption shows interesting patterns. The poorest households tend to rely heavily on bushmeat in rural areas while in urbans settings, it is consumed as a luxury product. Approximately 4,5-4,9 million tonnes of bushmeat are harvested in Sub-Saharan Africa yearly, from 500 different species of which 91 are threatened. The targeted species are mainly ungulates which represent 73 % of total catch. 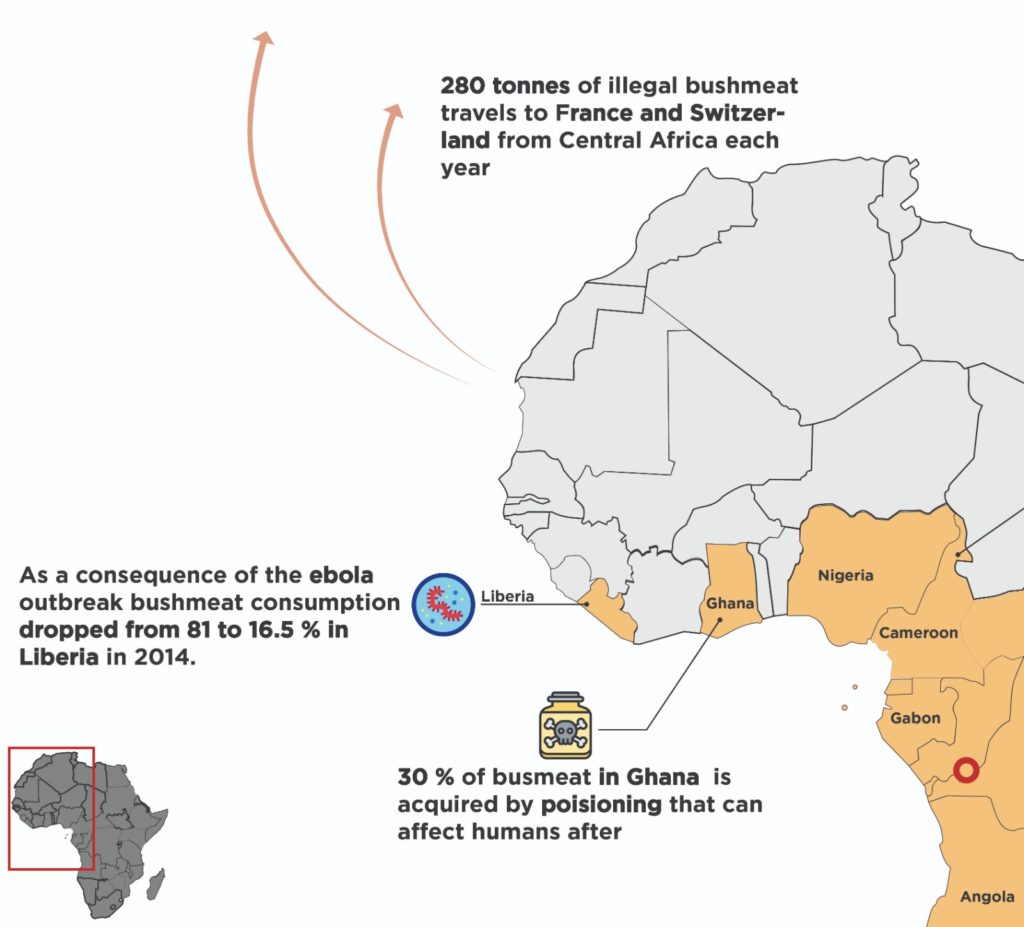 The financial crisis 2008 fuelled bushmeat hunting as crop prices collapsed and hunting provided a good alternative for income generation. Internal conflicts like those in the Central African Republic set further impediments for transportation and availability of cheaper agricultural products which makes bushmeat consumption and trade the most feasible option for local communities. The increasing number of people participating in the hunting also leads to less sophisticated and crueler methods including snares and poisoning.

Countries of the Congo Basin have the highest reliance on bushmeat protein, consuming about 51 kg/capita annually. In these tropical countries, mammal biomass is lower than in savannas, therefore the same harvest has a higher impact on ecosystems. Besides this, agricultural production is lagging behind population growth, leaving people with fewer options for food. Countries rapidly emerging out of poverty like Gabon often rely quite heavily on agriculture. However, Gabon’s dense rainforest hampers farming, which only accounts for 40% of the food supply. The heavy bushmeat harvest this causes is slowly but surely diminishing animal populations and leading to the so-called “empty forest” or “empty savannah” syndromes. 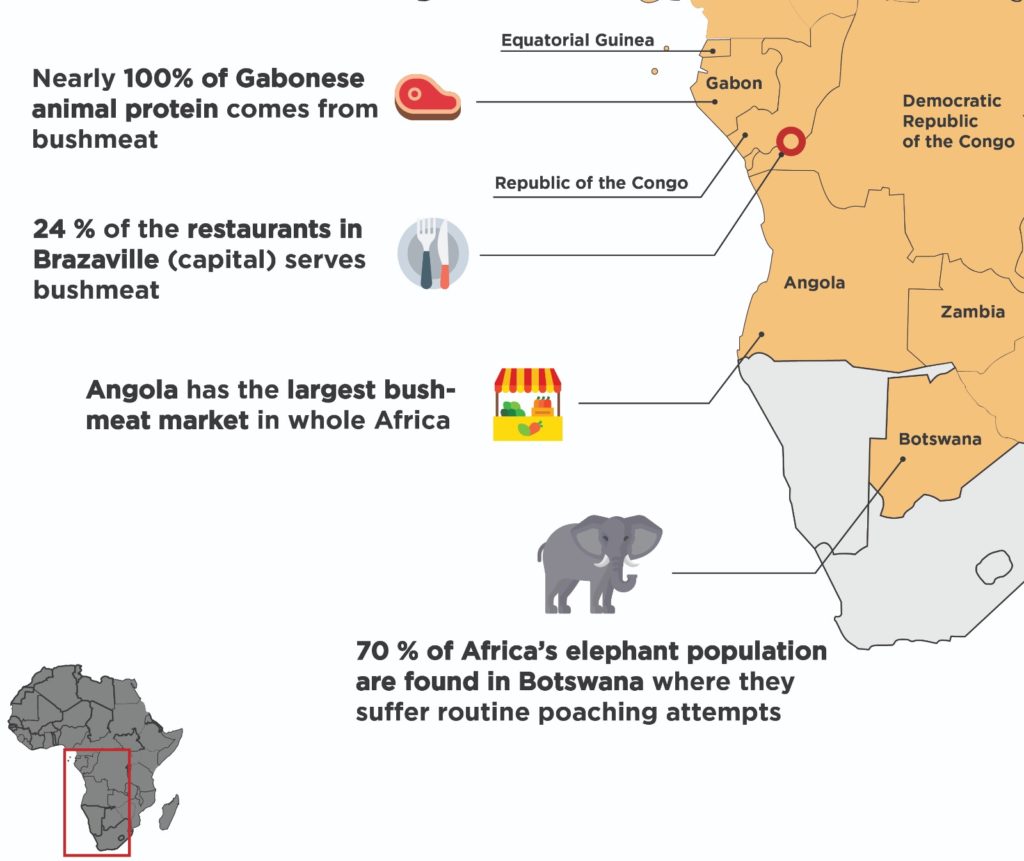 Although there are many natural parks dedicated to protecting wildlife, they do not have the means to effectively curtail bushmeat hunting. In other cases, policy is the problem. Weak governance, weak regulations and ambiguous customary rights make it more complicated to address the unsustainable hunting practices. The presence of effective protected areas would be of paramount importance in hand with clear legal constraints, well-enforced bans and regulation on the most vulnerable species. Increased public awareness and education on the consequences of wildlife extraction could help, but the real problem is poverty. Until this is solved, the bushmeat crisis is likely to persist.