Air pollution embodies the largest environmental health risk globally leading to 7 million deaths every year. As part of this, ambient (outdoor) air pollution (AAP) only is responsible for 4.2 million deaths. One of the most common and harmful components of air pollution is fine particulate matter, otherwise known as PM2.5, which comprises all particles and droplets less than 2.5 microns (a millionth of a meter) in diameter.

The most important sources of ambient air pollution are transportation, emissions from power plants and biomass combustion. Depending on where you are, particulate matter can also come from natural sources. Dust storms are a common source of poor air quality in the Middle-East, and large aerosol plumes are often wafted over from the Sahara. In fact, AAP has become a high level global threat as pollution disperses globally, and travels across continents and oceans, unlike chemical contaminants for instance. Approximately 5 – 15 % of pollutants of Chinese origin such as carbon monoxide or sulphate oxides are detected in the western part of the United States.

Although air pollution does not distinguish between socioeconomic groups, there are clear geographical biases. Countries from the Middle-East, South-East Asia and Western Pacific regions are the most severely impacted by AAP. 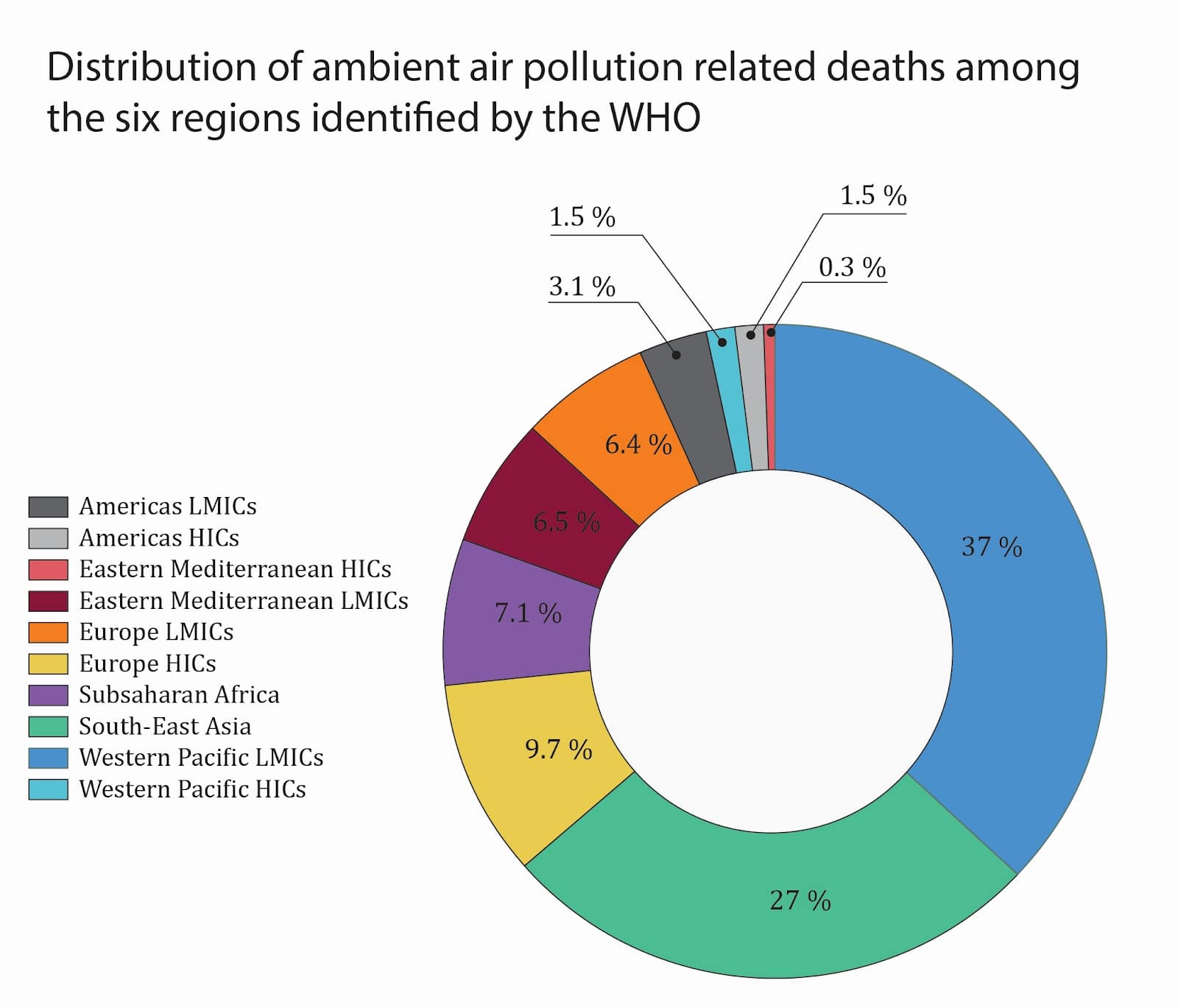 Ambient air pollution has been linked to various diseases. The most important pollutants with identified adverse health effects are ozone, carbon-, nitrogen- and sulfur oxides and particulate matter (PM). Formed by a mixture of solid particles and liquid droplets, such as smoke or dust It is the biggest contributor to increased morbidity and mortality worldwide. PM is categorized based on the particle sizes. The three groups are coarse PM or PM10  (aerodynamic diameter of 10μm or less), fine PM or PM2.5 (2.5μm or smaller) and ultrafine particulate matter (1μm or smaller). The ultrafine particles are the results of fresh exhaust which transform into PM2.5 in a short period of time. PM2.5 and PM10 are more heterogeneous mixtures of organic and inorganic materials that build up from hundreds of different substances. Some PMs are direct products of emissions (like fire smoke) but most form in the atmosphere by chemical reactions between water, dust, and emission products including nitrogen and sulfur oxides, ammonia and black carbon.

When inhaled, these particles enter the lungs where they elicit inflammatory responses and damage our airways. PM10 can penetrate quite deep, but PM2.5 can move through epithelial barriers and reach the bloodstream resulting in more serious outcomes.

Exposure to PM2.5, even at very low concentrations, is linked to a wide range of diseases influencing several organ systems. It has a strong causal effect on cardiovascular and pulmonary diseases including myocardial infarction, stroke, hypertension, congestive heart failure, ischemic heart disease (IHD), chronic obstructive pulmonary disease (COPD), lung cancer and increased prevalence of cardiac arrhythmias. On top of this, new evidence points to a correlation between PM2.5 pollution and certain widespread non-communicable diseases (non-infectious) such as diabetes, attention deficit disorder and decreased cognitive functions. Strokes and IHD are the most deadly of these, each responsible for around 1.1 million ambient air pollution related deaths yearly.

Annual or daily mean levels of fine particulate matter are a good indicator of air quality since it affects more people than any other pollutant. In most of the countries the annual median concentration of fine particulate matter is significantly over the safe level of 10  μg/m3  recommended by WHO. In fact, over 90% of the world’s population is exposed to unhealthy levels. The average PM2.5 concentration today is 35 μg/m3 and large cities in developing countries often have the worst of it; Ghaziabad in India had an average of 110 μg/m3 in 2019. 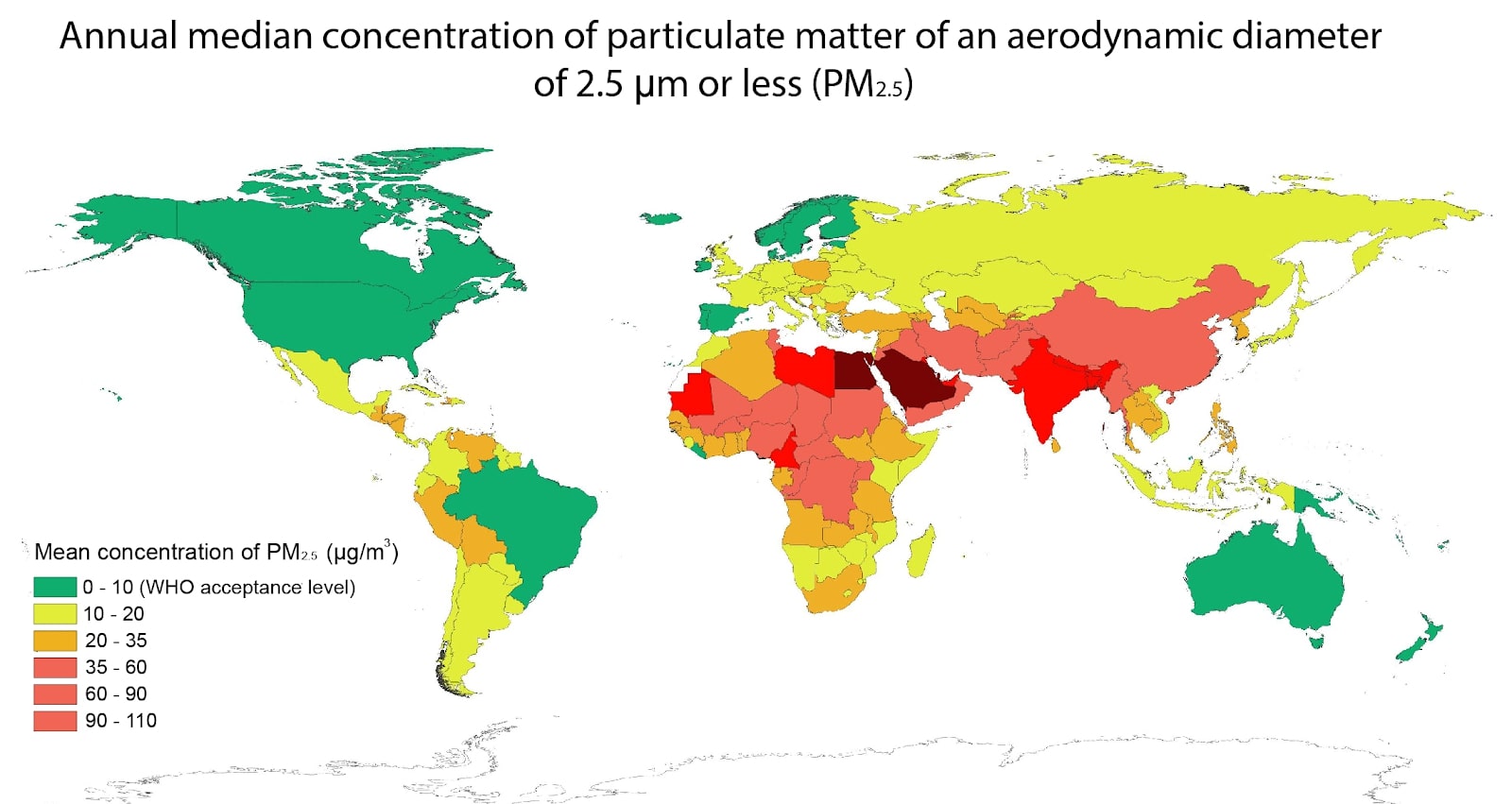 Ambient air pollution can be well measured by PM2.5 concentration. The median of the mean concentration for various detection points was taken for the map. The figure was designed based on 2016 measurements by the WHO.

Air pollution has become a priority issue in political agendas and is a major determinant in achieving sustainable development goals. Air pollution is  a good marker of sustainable development since it’s level highly correlates with greenhouse gas emissions. In parallel with the growing burden of air pollution, our ability to monitor it and determine its sources is improving, thus introducing better regulation potential.