Santa Ana and Diablo Winds to Worsen the California Wildfires

The 2018 Californian wildfire season was the deadliest and most costly ever recorded. Until 2020 came around. This year has been remarkable in its ability to outdo yesterday’s bad news, and the current wildfire season tops every one of the last decade’s record-shattering streak. The state is bracing for the Santa Ana and Diablo winds, which could further stoke the blazes.

Although summer wildfires are an annual challenge in California, the last few seasons have been ostentatiously worse than average. The LA times went through decades of data and found that 8 of the 10 worst fires in recorded history have occurred in the past ten years. In terms of total area burned, 2020 has already taken the lead with 5 million acres burned, and damage estimates surpass US $1 billion, though this does not include many of the knock-on costs.

Firefighters are going through hell, working 60 hour stretches with 20-minute catnaps and no relief in sight. Despite having 17,000 men and women on the job, the drought combined with winds makes it nearly impossible to contain the blazes.  We haven’t even reached the peak of this season yet, as fall winds are known to come down from the Sierra Nevada mountains and further stoke the blazes. The Diablo and Santa Ana winds in particular, are two hot, dry currents that blow through California north-east to south-west. When the vegetation is dry as it has been, the gusts are very likely to help wildfire spread. 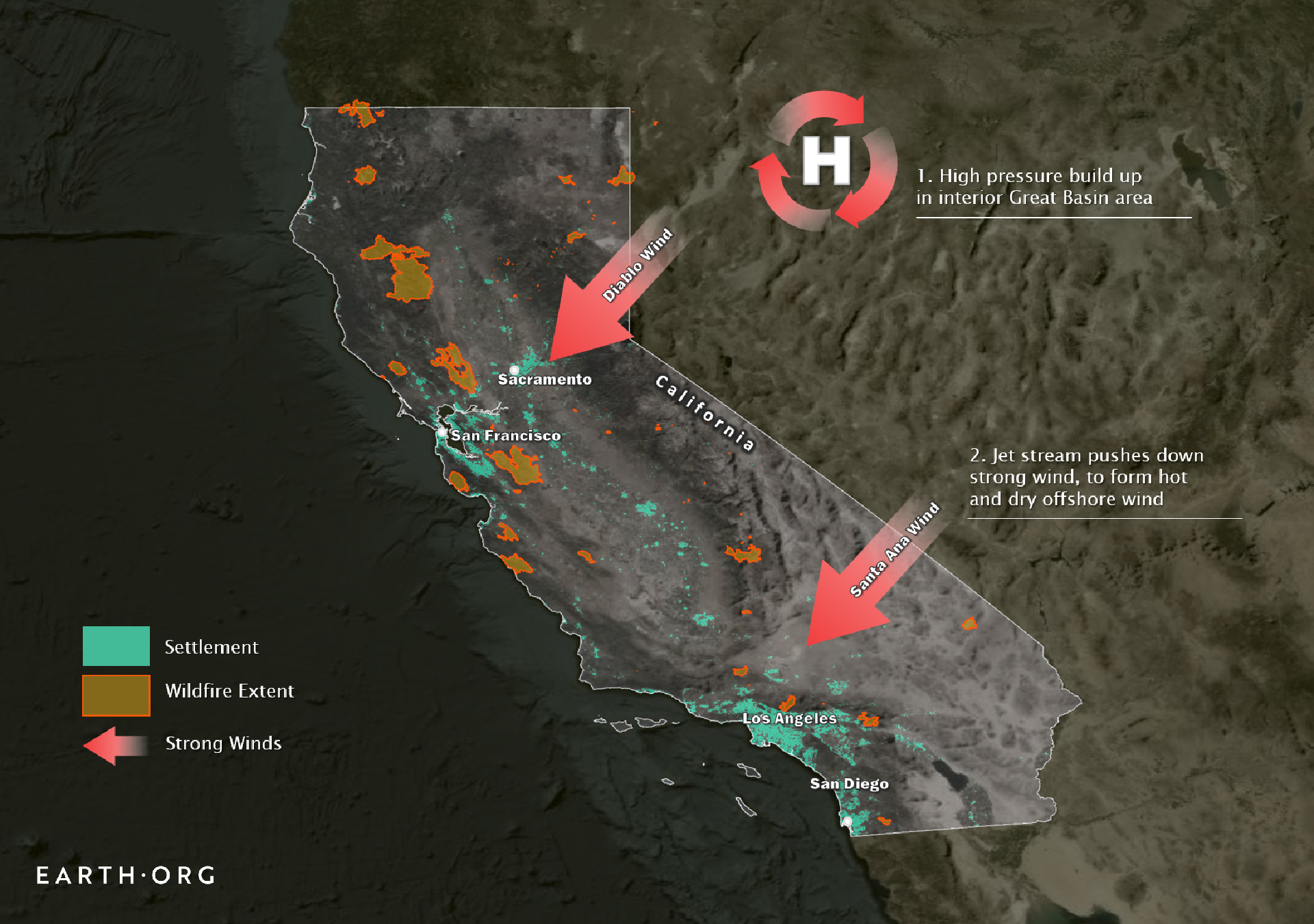 Over two dozen fires are raging as you read this article, and together, they equal the Golden State’s urban land area (~5 million acres). Of these, a few are upwind of Californian settlements. The Diablo wind passes further north and could threaten agglomerations around San Francisco, although fires in the area are usually prioritized. 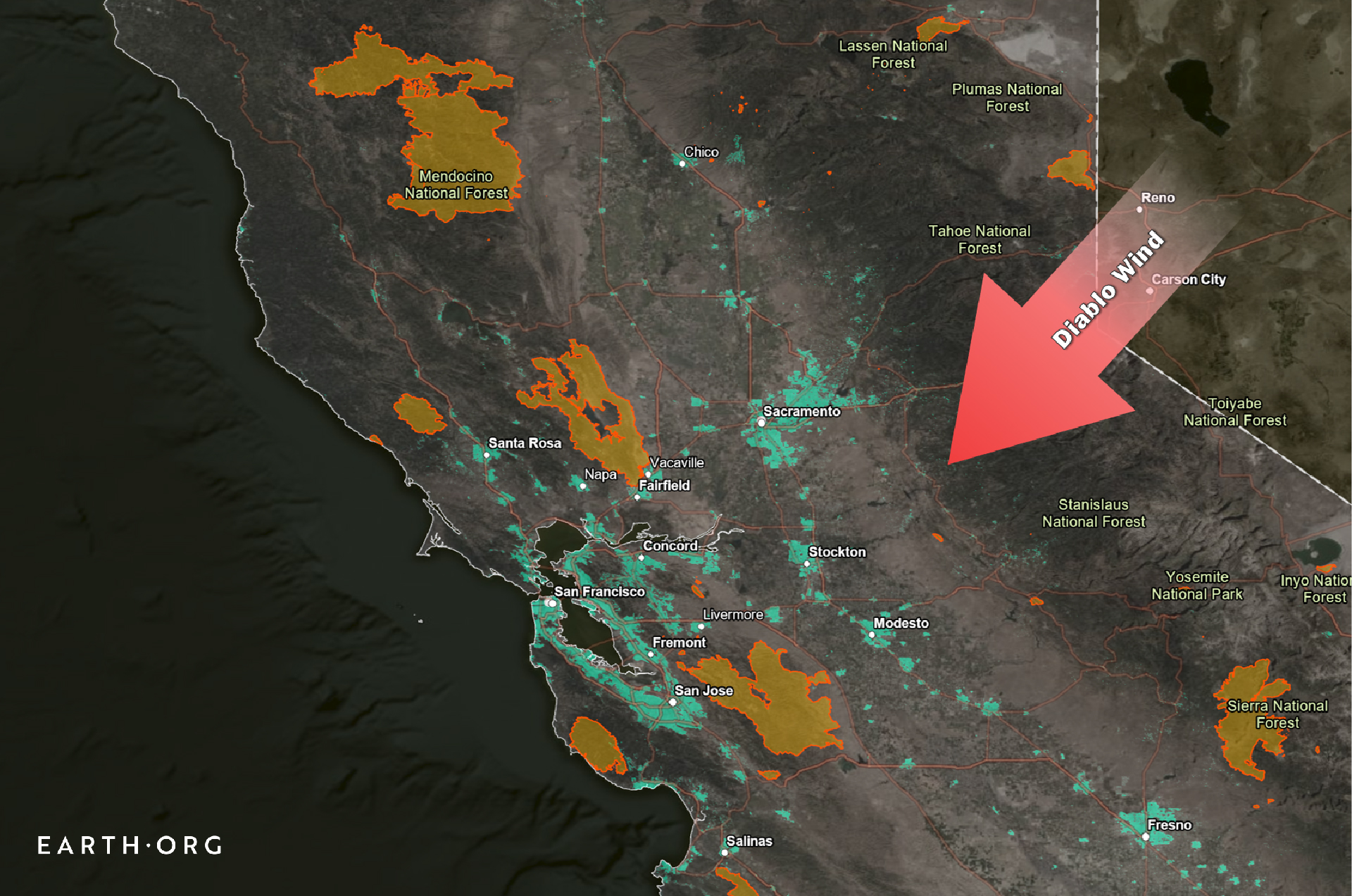 Closer look at the wildfires in the northern parts of California, and the direction of the Diablo wind. Mapping by Braundt Lau.

Fires around Los Angeles are fewer and smaller, yet too close for comfort. 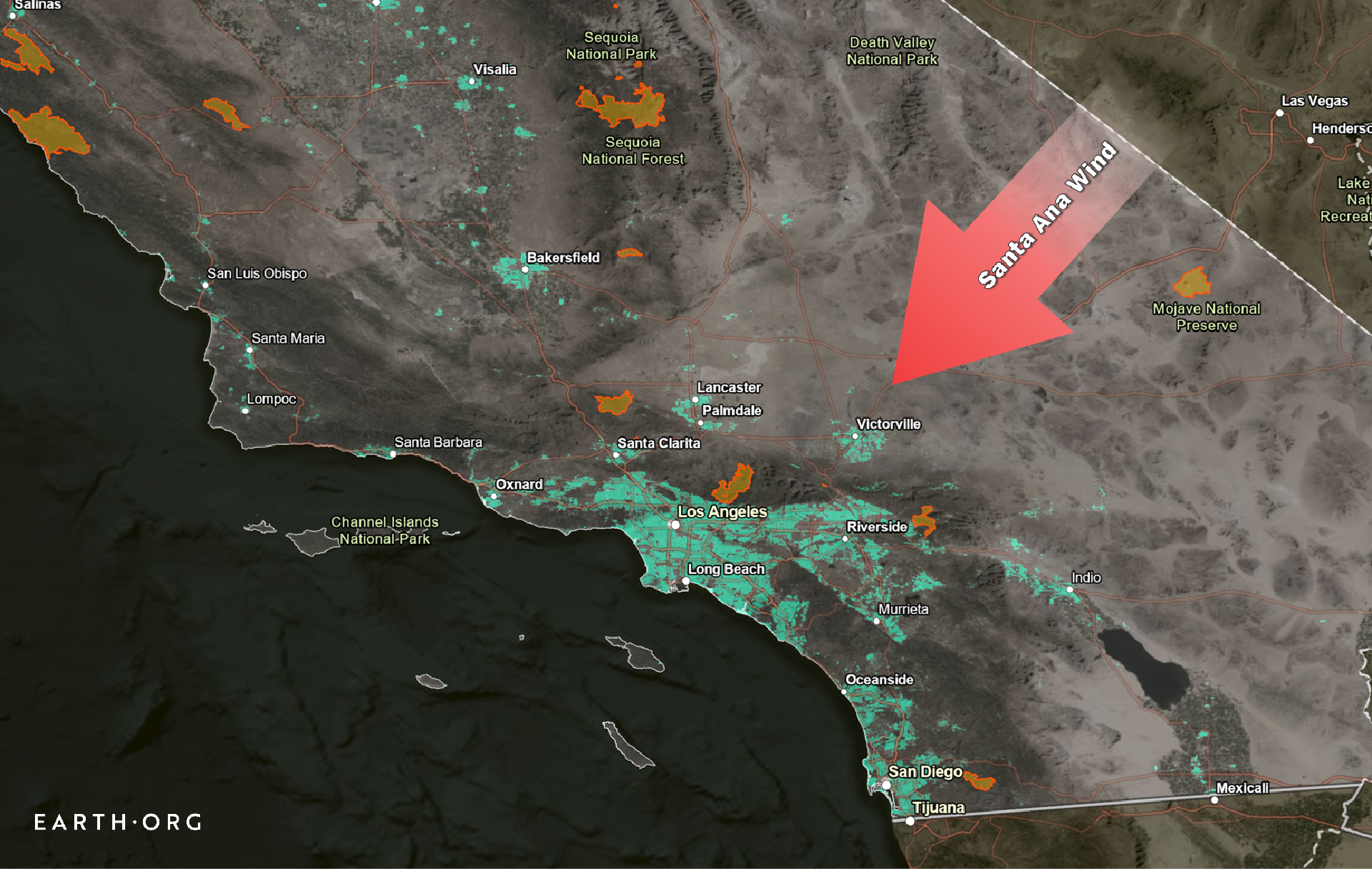 Closer look at the wildfires in the southern part of California, where the Santa Ana wind will pass. Mapping by Braundt Lau.

While firefighters will be sure to invest the necessary effort and funds into protecting large cities, they are spread thin and many smaller towns will bear the brunt of the damage. Many will have to make the hard but necessary decision of leaving their homes behind, and return to find only ashes and rubble. It is the US authorities’ responsibility to update their fire prevention budget and strategies which have become outdated in the face of climate change.