Osaka, like much of Japan, is highly vulnerable to natural disasters. From wind and rain typhoons to earthquakes and tsunamis, the Japanese government spares no effort on flood defence. Sea level rise means scientists must reevaluate their current strategies.

Earth.Org has mapped what severe flooding could look like in Osaka by 2100.

Osaka has been an important economic hub in Japan since the year 300, and is the second largest metropolitan area in the country today with 20 million inhabitants. According to a 2008 OECD report, Osaka is one the most vulnerable port cities in the world, risking USD $200 billion in damage from coastal flooding.

Sitting on low-lying flatlands, Osaka was reminded of its exposure to paralysing floods on September 4th, 2018 as typhoon Jebi made landfall. 11 people were killed and 700 more injured while a massive oil tanker crashed into a bridge, and the Kansai international airport was flooded.

The Japanese are no strangers to natural disaster, having dealt with some of the worst earthquakes, tsunamis and heavy flooding. Their flood defence systems are carefully built based on scientific models, but these must be updated to keep up with recent advances. The dykes and flood gates on the Yodo River, which runs through the city, can withstand a 1-in-200 year flood (whose intensity has a 0.5% chance occurring in any given year). However, sea level rise is changing the baseline, and will eventually shift a 1-in-200 to a 1-in-100 and so on.

Japan wrote a law in 2015 requesting municipalities to prepare for 1-in-1000 year scenarios, before the latest reports predicting a 1 to 2 metre rise in sea level. The costs will be huge, but the alternative could cost even more, adding the financial to the human cost. Earth.Org has modelled what severe flooding would look like in Osaka by 2100, to illustrate the extreme necessity of prevention. 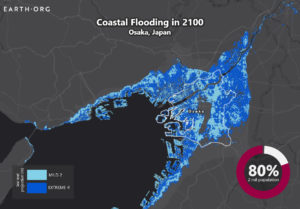