Scientists have been warning us that climate change could lead to more extreme weather events. The 2019 Australian bushfires were the first spectacular signs of a worsening climate, and 2020’s monsoonal floods have confirmed it. We are experiencing stronger droughts, heavier floods, and we are unprepared.

The Brahmaputra River runs across the whole Assam state, a state in Northeastern India. Flooding along the Brahmaputra River has been a yearly occurrence during the monsoon season from early times. Today, as flood defenses falter,  it has become clear that climate change has magnified the intensity of the yearly downpours.

The Brahmaputra river’s banks have been continuously flooding since the beginning of the monsoon season in May this year, affecting an estimated 2 to 3 million people (as of the end of July). 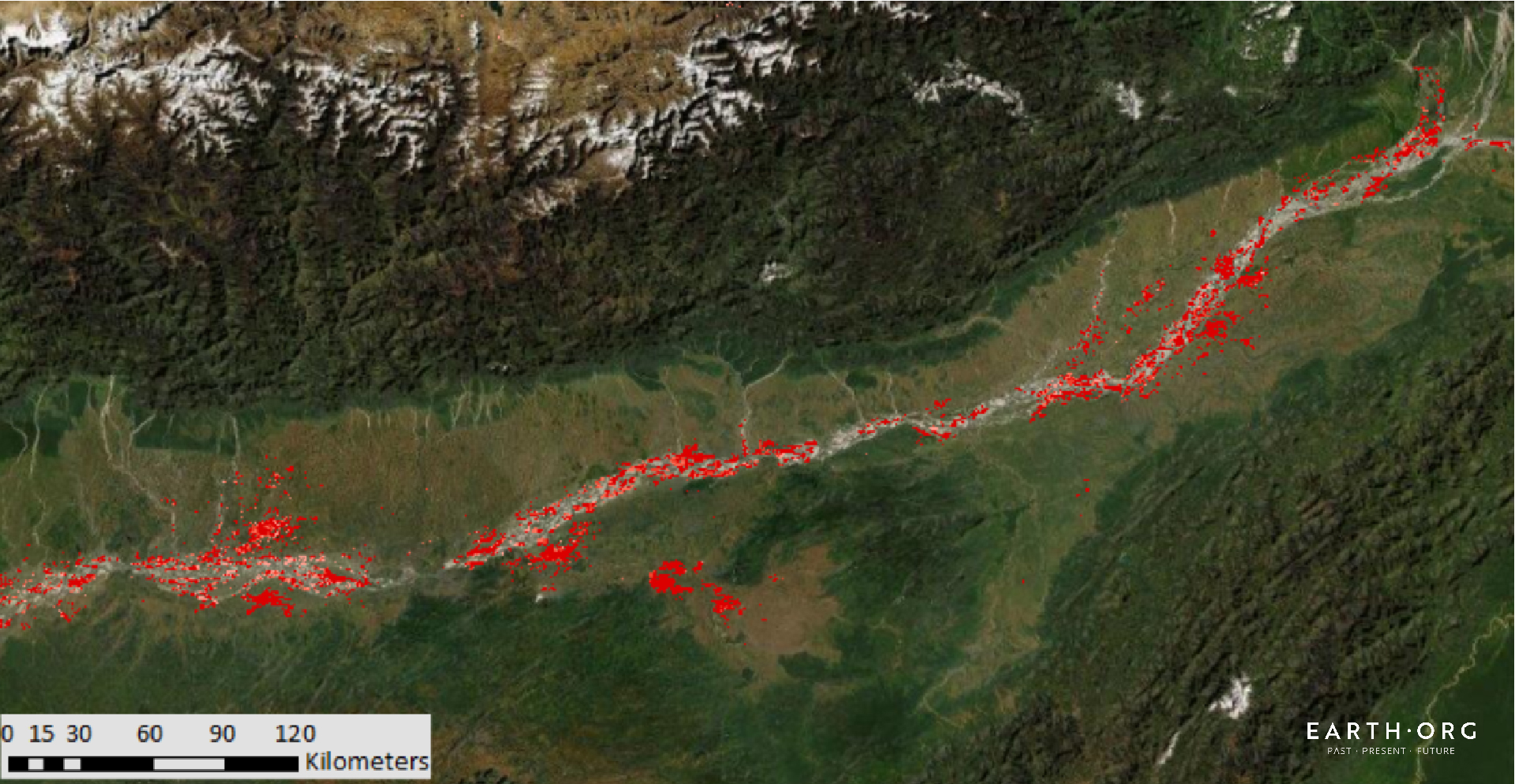 Second wave of flooding in Assam after the Kurichu Dam (yellow point) gave way (25th July – 8th August). Flooding was worsened on the lower (left-hand) part of the river.

The severity of the second wave of floods was partly due to the release of upstream dam water from the Kurichu Dam (yellow dot) in Bhutan.  Water is released into Beki River, one of the tributaries of the Brahmaputra River, which flows through lower Assam. 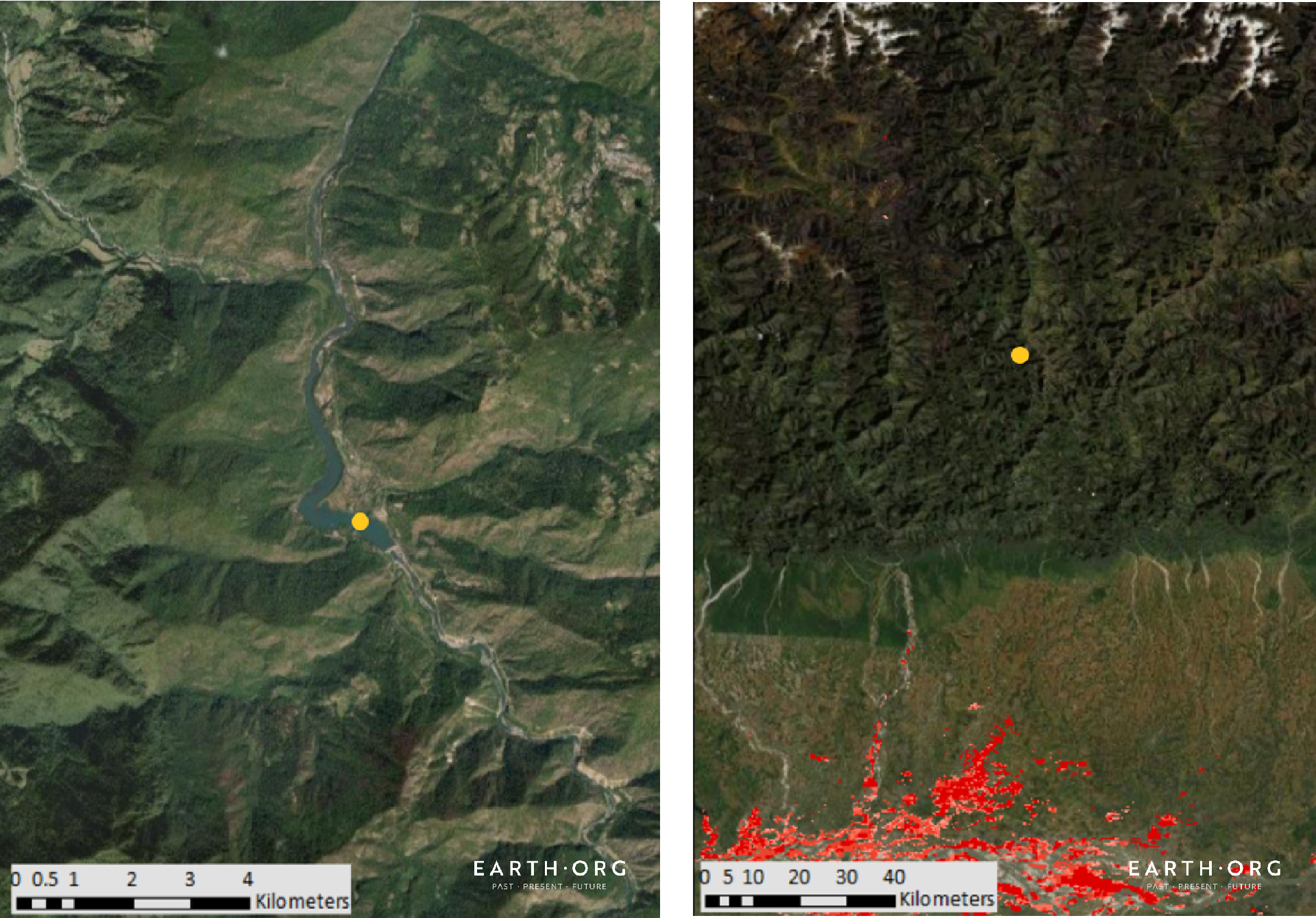 The Kurichu Dam in Bhutan that gave way during the July 2020 floods.

Southern China has also experienced its worst floods in decades since early June, with over 50 million inhabitants affected as of the end of July. While rainfall and climate change are partly responsible, flood control measures were also insufficient. Southern China is an important agricultural region with may agglomerations and crops located near large water bodies, like the Yangtze River. This year’s massive overflow has led to food security fears due to crop loss; overall damages were estimated at US $3 billion.

The hardest-hit province was that of Jiangxi, located on the southern bank of the Yangtze River, where nearly 700,000 people were evacuated and 659,700 hectares of crops were lost by the 18th of July. 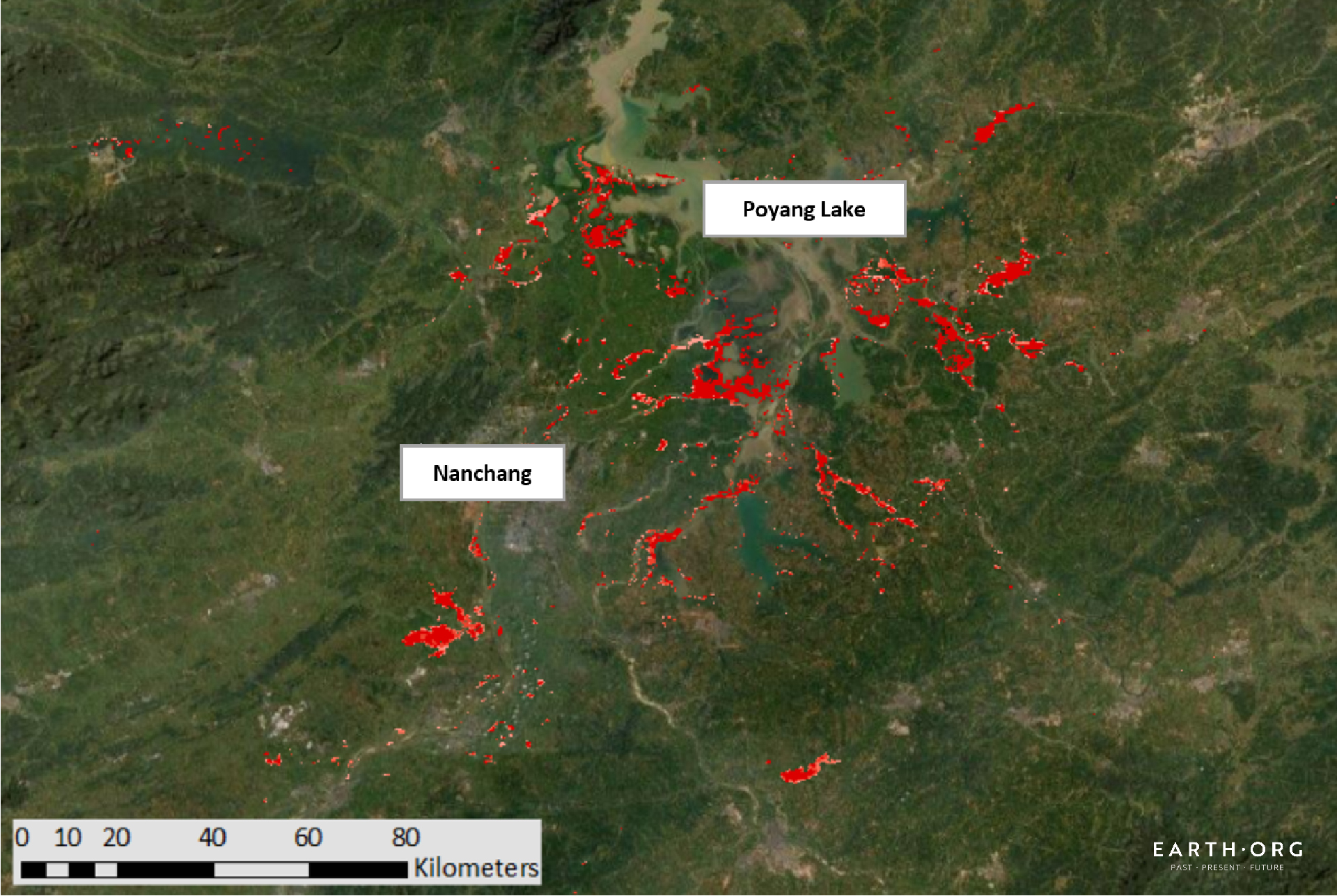 Flooding in the Jiangxi Province around Lake Poyang. The city of Nanchang sustained the most damage in this area (4th – 17th July).

Lake Poyang, the largest freshwater body in China through which many tributaries of the Yangtze River flow, spilled over on the 22nd of July. The map above shows the flooding around the lake, mainly affecting the Jiangxi capital Nanchang. 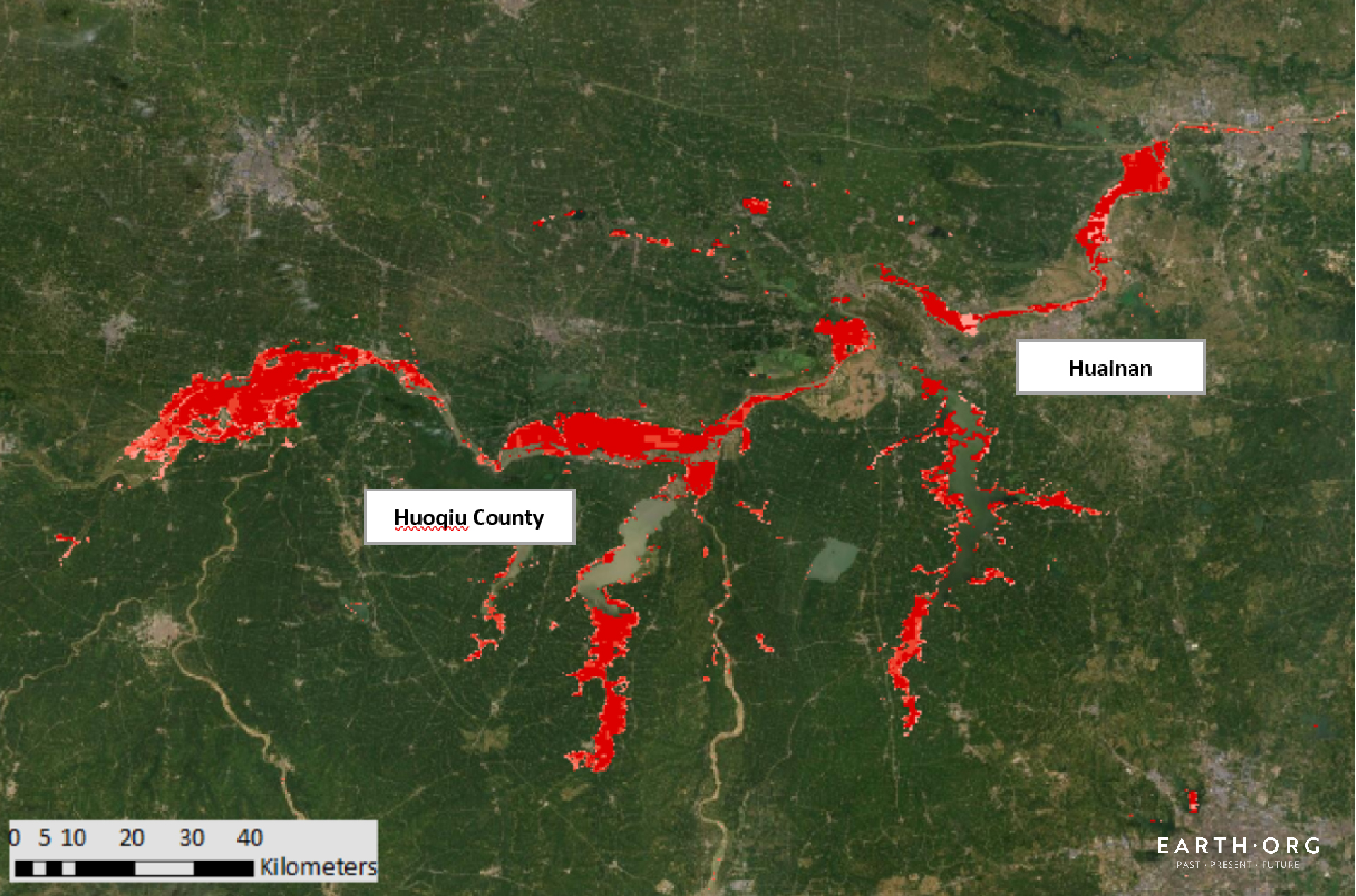 Huoqiu county and the city of Hainan in the Anhui province are near both the Huai and Yangtze River beds. Floods swept through the area, displacing another 600,000 people and leaving farmland submerged shortly before harvest. Since floods have become more frequent around the Yangtze River in the last decades, the government invested heavily in flood control, notably building the Three Gorges Dam. However, the unexpectedly violent water surges are overstraining it; it is bent 11 meters off its original position today. As things stand, it will eventually collapse and cause massive damage to the agglomerations and crops downstream.

Bangladesh is infamously prone to natural disasters, including monsoonal floods. This year was no exception, aside from the fact that nearly a quarter of the country was underwater.

The Brahmaputra, which flooded the region of Assam, flows through India and Bangladesh before reaching the Bay of Bengal. In a poor country already reeling from the coronavirus, the floods have heavily hit agricultural production and food security. This comes only two months after cyclone Amphan’s US $13 billion in damages. 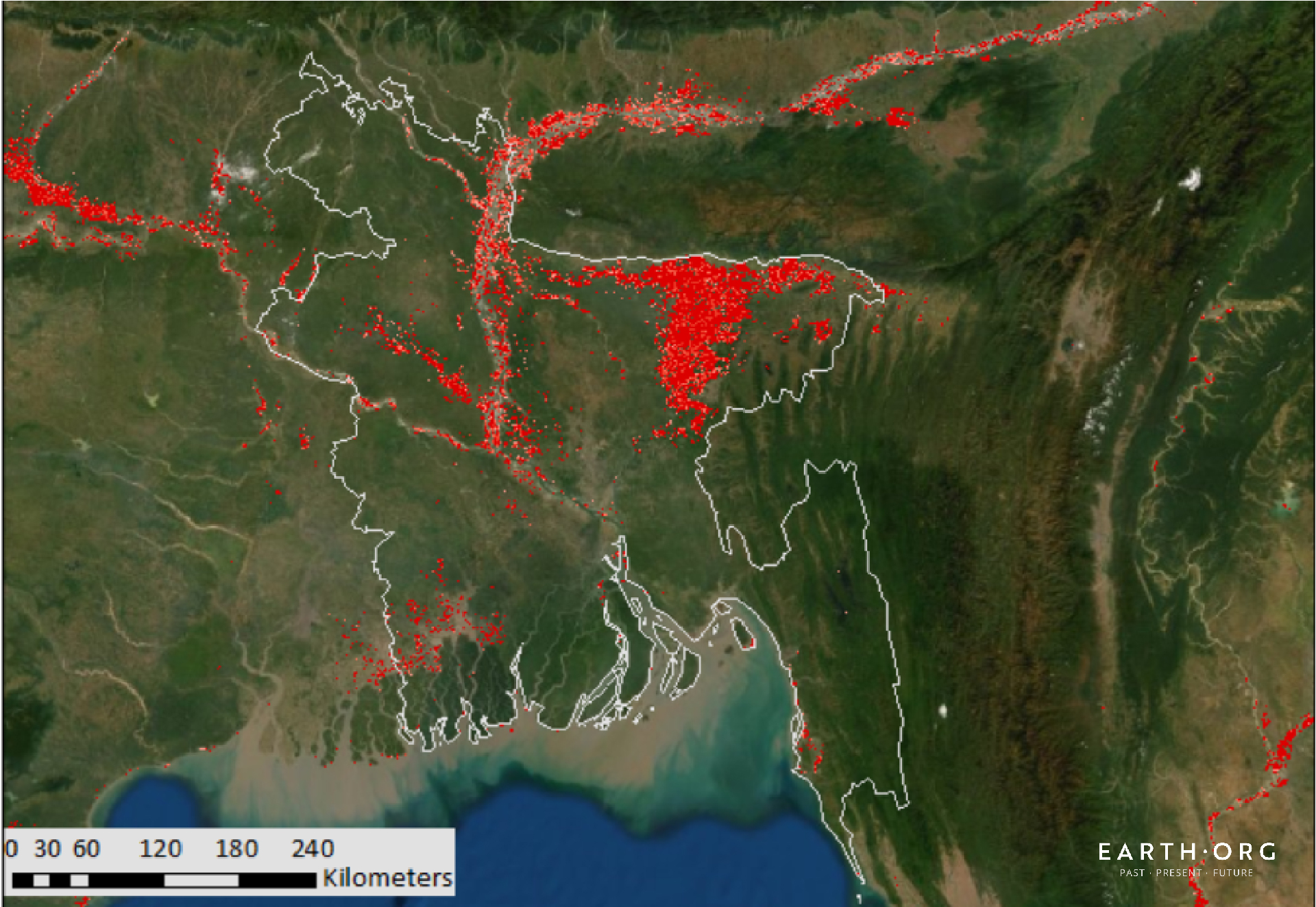 According to Reliefweb, 5.4 million people were displaced, nearly a million houses, water sources, and hygiene facilities inundated and basic services such as health care and education were disrupted.