The Resilience of Sharks, And What their Decline Means

Sharks are one of the oldest families on earth, surpassed by only a handful including jellyfish, nautilus, and velvet worms. The first traces they left behind date back as far as 420 million years ago, indicating survival of four of the five mass extinction events. Older than Mount Everest, dinosaurs and trees, one of the most resilient animal species on Earth is now endangered by human activity.

Sharks are cartilaginous fishes, their most solid body part being their teeth. Oftentimes they grow these throughout their lifetimes, shedding older or broken ones that drop to the ocean floor. Most fossils left behind by sharks are thus teeth.

The oldest teeth are 410 million years old, and belonged to the Doliodus problematicus although it was so different from present-day species that it is dubbed “the least shark-like shark”. The first truly recognizable shark is the Cladoselache, who swam the seas around 380 million years ago (mya) sporting the same torpedo-shaped body, dorsal fin and forked tail.

The Devonian Period (420 – 360 mya) ended with a mass extinction event that killed off ~75% of all animals on Earth, yet sharks endured. In fact, they went on to have a “golden age”, as the vacant niches gave many opportunities for evolution. Many strange species appeared at this time like the Stethacanthus, equipped with an anvil-shaped back fin, or the Helicoprion whose bottom jaw looked like a spiral buzz-saw. 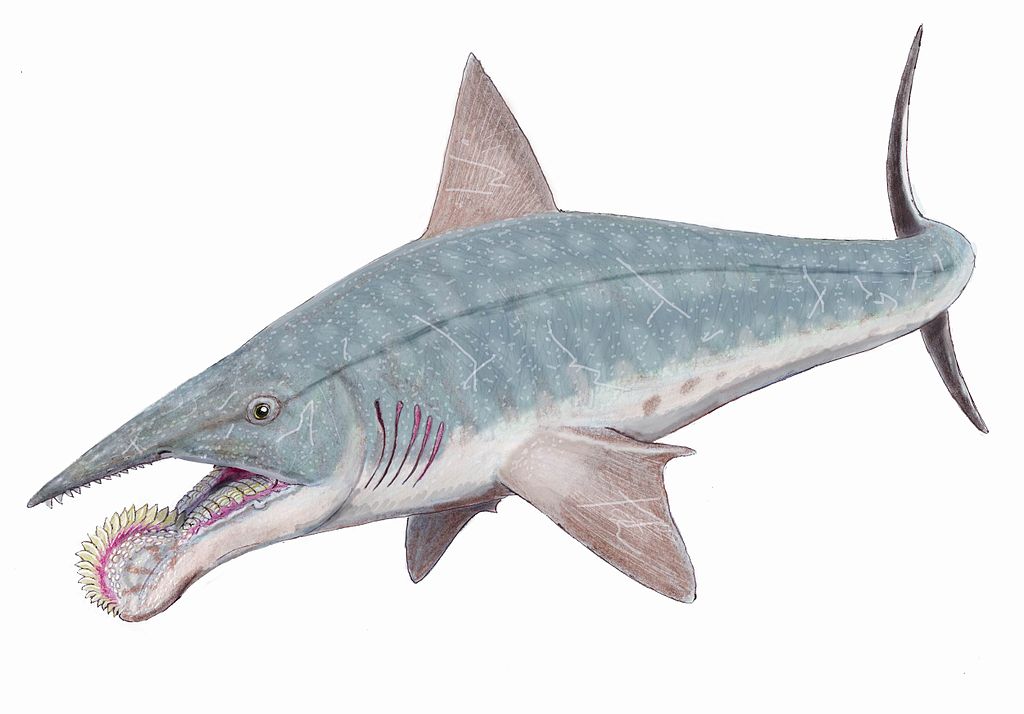 At the juncture between the Permian and Triassic 252 mya, another mass extinction occurred, this time wiping out 96% of marine species, 70% of terrestrial vertebrates and 57% of all known insect families. A few, small shark lineages survived by moving into deeper waters, as evidenced by the 1 to 2 millimeter wide teeth they left behind. Over 60 million years pass before another mass extinction, kicking off the Jurassic Period. This is when the earliest known group of modern sharks appeared: the sixgill sharks (Hexanchiformes). The bluntnose sixgill (Hexanchus griseus), also known as the cow shark, is still found in tropical and temperate waters worldwide.

These now ancient predators thrived throughout the Cretaceous, suffering losses but once again surviving the next extinction event (~66 mya). Smaller species were better off once again, thanks to their ability to reproduce faster and adopt varied diets. The following period known as the Palaeogene saw the greatest forms of sharks known to man, including the Megalodon. A common misconception is that the great white and the Megalodon are related, when in fact the great white’s ancestors may have been in direct competition with this giant. 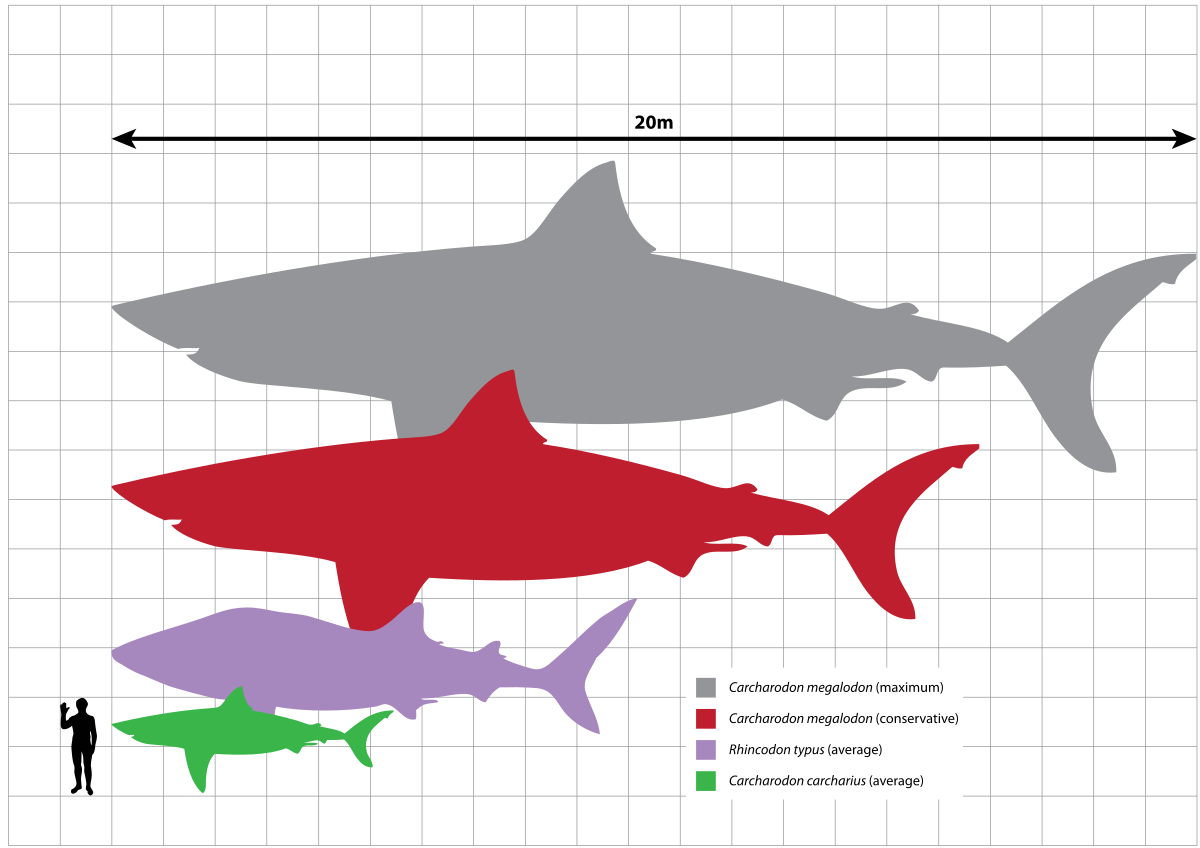 Since the End-Cretaceous extinction, sharks have once again asserted a ubiquitous presence and dominance throughout the seas and oceans. However, we are now experiencing a new biodiversity crisis. According to the IUCN, over a million plant and animal species are threatened by extinction due to habitat loss, hunting and overfishing. Sharks are no exception, as they routinely get caught in the gigantic trawling nets every day.

The fact that sharks, along with nautili, crocodylians, velvet worms and  a few other families have survived through mass extinctions that redefined our planet’s biosphere, yet are faltering now, is a testament to how destructive our actions are. 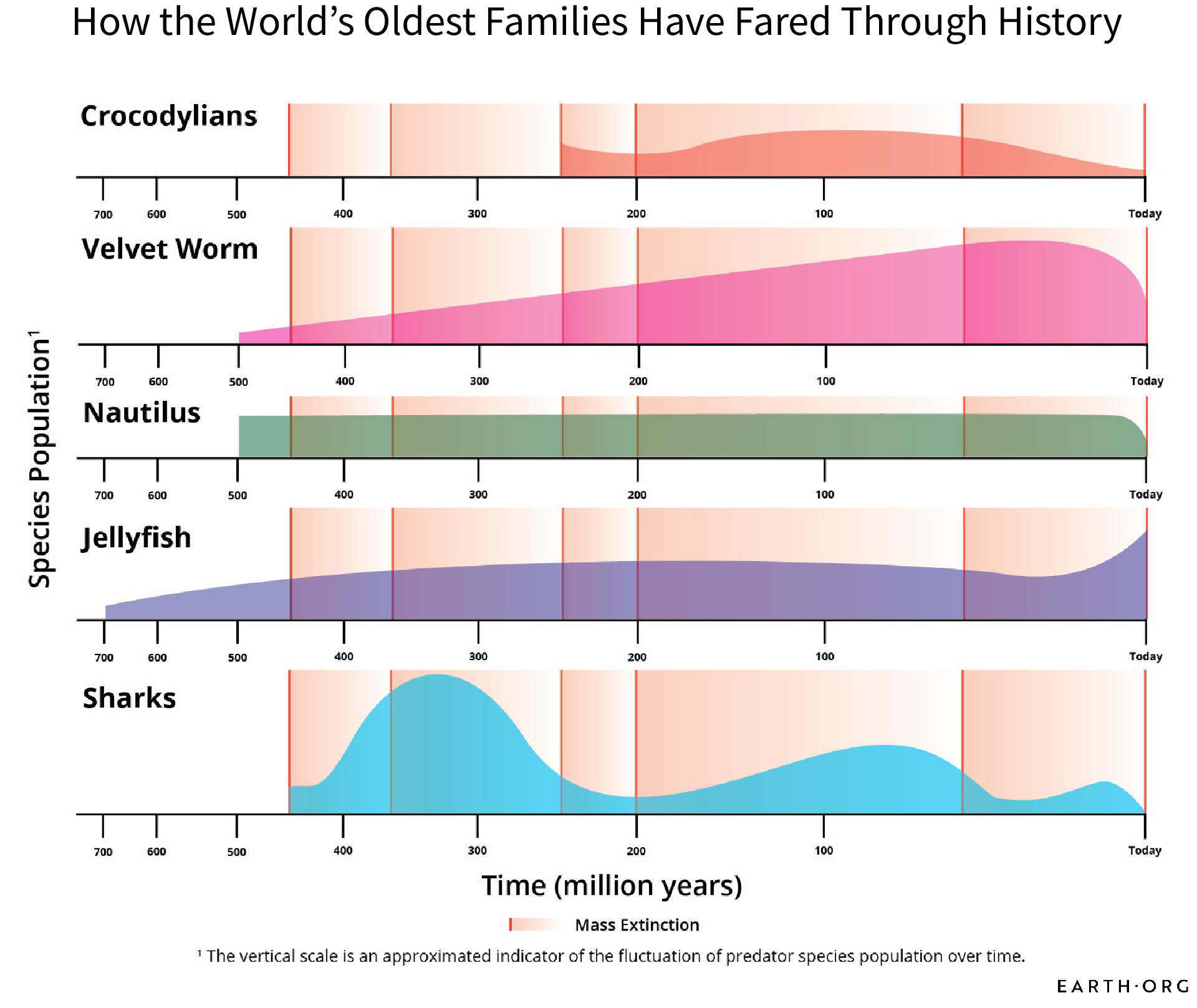 Estimated population fluctuations of some of the world’s oldest families. On the lower axis, time is represented on a reverse logarithmic scale, meaning time slows down from left to right. By Sean Baerfuss.

Some of the past mass extinctions unfolded over millions of years, so when we consider the damage we’ve done over the past two centuries, there is cause for alarm. A simple extrapolation of today’s extinction rates indicates we may be unleashing the most deadly mass extinction the earth has ever seen. We must act now.