We are all aware of the world’s plastic problem, although its scale can be hard to grasp. Over 8 million tons of plastic are dumped into the ocean each year, where it harms and kills marine life, absorbs toxins and works its way up the food chain back to our plates. Here we present a guest post that helps you visualize some of the solutions being deployed to combat this problem.

Plastic products are so commonplace that it’s actually hard to imagine life without them. From the disposable forks we use at an outdoor picnic, the grocery bags we use to carry home goods, straws we use to drink to-go coffees or sodas and disposable bags we use for leftovers, these products play a huge role in the day-to-day lives of most people.

Because it has become so ingrained in our lives, it’s sometimes hard to see the negative impacts of the product. When plastic gets lost in the ocean, they create a huge problem for the marine ecosystem and the waters.

How Long Does Trash Last in the Ocean?

There are many ways that these materials make their way into the waters. Whether deposited there during a beachgoer on a busy day, or blown there from a local landfill, they will last in the ocean for years after they make their way there. 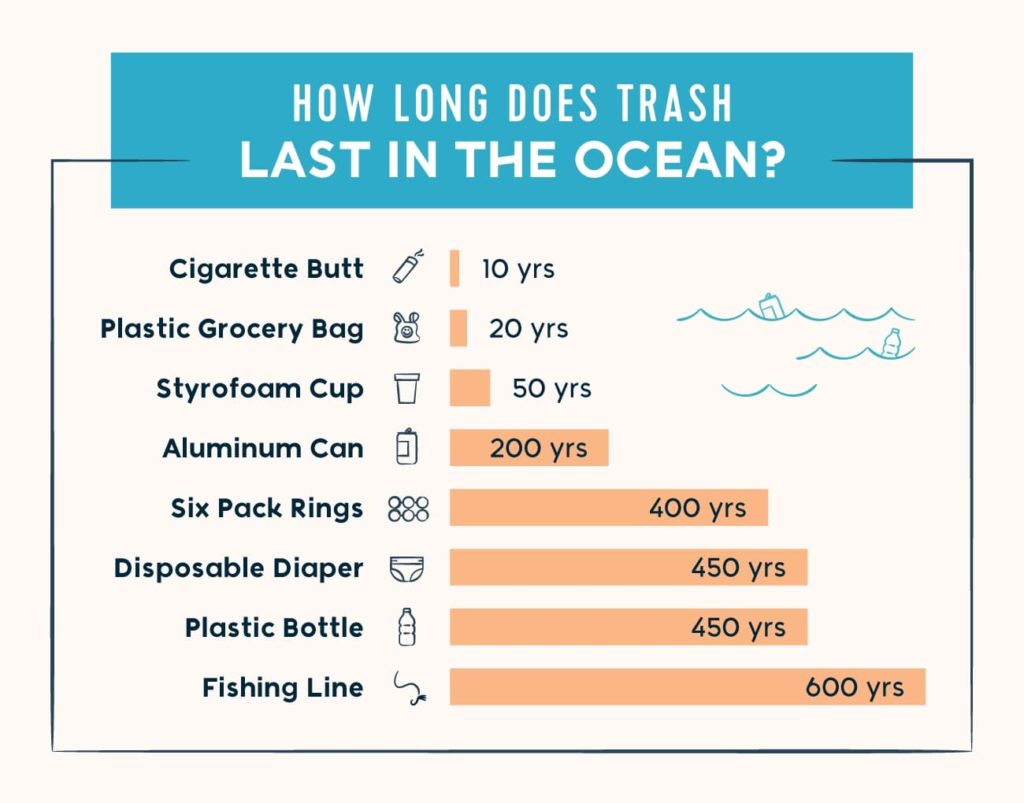 It’s important to keep in in mind that plastics never fully biodegrade. Typically, they break down into microplastics that continue to cause an issue for the oceans and the animals that live there.

There is a plastic crisis in our oceans. However, there are also researchers and scientists throughout the globe trying to solve the crisis by innovating new ways to clean up our oceans. We’ve rounded up some of the wildest ways we’re cleaning up our oceans, including some that are currently in use and still being tested.

This prototype is working to target the gyre at the heart of the North Pacific Ocean, also known as the Great Pacific Garbage Patch. The gyre is about three times the size of France, and is found in the Pacific between Hawaii and California. System 001 is the first technology that is specifically targeting this area.

The system is a large boom with an attached skirt that floats with the current to collect the plastic pollution in the gyre. The goal is the capture the plastics while they are still large enough and before they become microplastics.

Australian Surfers founded the Seabin Project to develop the Seabin V5, a floating vacuum that is made from recycled materials and is meant to operate in marinas, ports and other calm areas. The Seabin pumps water into a filter bag that captures the plastics and releases the water back into the harbor. The Seabin can also absorb detergents and oils that are commonly found in marinas.

The WasteShark is an aqua drone that aims to prevent and reduce marine pollution by eliminating debris. Inspired by the whale shark that combs through the waters with its wide mouth, the drone also skims the surface and collects debris through a wide opening. The technology can run for up to 16 hours and collect up to 400 pounds of litter in one trip.

Mr. Trash Wheel, also known as the Inner Harbor Water Wheel, is a sustainably powered trash interceptor cleaning up the harbor of Baltimore. Powered by both hydro and solar power, the wheel pulls tons of trash out of the harbor each year. It is estimated to have blocked about 1.6 million pounds of debris from entering the Atlantic Ocean! Trash is funneled into the interceptor by the river’s currents. A conveyor belt then collects the trash, incinerates it and converts it into electricity.

Student interns from several California high schools and colleges have partnered with Clear Blue Sea, a San Diego non-profit organization, to reduce garbage in the Pacific Gyre. FRED, also known as Floating Robot for Eliminating Debris, is an ocean-traveling robot that runs on renewable energy. This prototype is still in development, with a projected completion date of 2023. It’s designed with flaps in front of the machine that collect debris and transport them to a collection bin via a conveyor belt.

According to a study by scientist Xiaoguang Duag, a possible solution to tackle the global plastic problem could be a new type of nanotechnology. Duag and his team created tiny magnetic nano-coils — smaller than half the width of a human hair — that can break down microplastics in the ocean through a chemical reaction.

These coil-shaped tubes are coated with nitrogen and a magnetic metal called manganese. This coating will react to the oxygen in the water, which is projected to attack microplastics and convert them into salt compounds, water and carbon dioxide.

For more information on ocean clean-up efforts, check out the below infographic (credit to floridapanhandle.com).