A recent published study has shown that items from takeout food and drink form the bulk of ocean plastic litter. Armed with this information, we can take decisive and effective action to help save ourselves and the environment.

The attempt to turn off the tap of marine litter flowing into the ocean should be at the top of the global agenda. From fast food chains removing plastic straws to cotton bud bans across Europe, decision makers have been hard at work, however, we still haven’t made a dent.

Thankfully, a new study by Carmen Morales-Caselles in 2021 has finally provided evidence which should help us better direct our actions.

The research team studied and categorised over 12 million litter items from the seven oceans (both surface and seafloor environments). 80% of the items were either made out of or contained plastic and were found mostly in surface waters or shorelines. Of note, 10 types of products accounted for three-quarters of all litter items found globally. 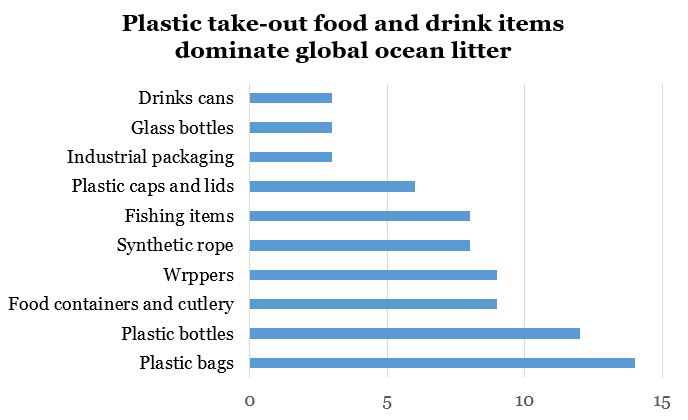 Shockingly, takeout items such as plastic bags and wrappers made up the largest share of ocean plastic, from 50% to 88%, across all the environments examined except open water.

Despite all actions that have been done on “trending” plastic items such as plastic straws and stirrers, effort has not been put into resolving the core of the problem. International corporations such as McDonalds have been purposefully fading out straws and stirrers from their branches since 2019 but according to Phys and the UN, straws are responsible for just 0.025 percent of ocean plastic. Other examples like cotton buds and lolly sticks only represent 0.16% of European plastic waste.

Refinement and reinforcement of current policies is imperative, especially in times of a pandemic where people rely more on takeout than ever. Between July and August 2020, Just Eat, one of the UK’s major food delivery companies, received 46.4 million takeout orders.

The plastic involved in a single food delivery is often underestimated. Reporters from the Sunday Times revealed that in a single order of 15 meals, a shocking 103 individual pieces of plastic packaging were provided even after declining extra cutlery.

Even if our overall plastic production hasn’t increased, the amount produced for food delivery has soared during the pandemic. The researchers suggest a ban on avoidable takeout plastic items, like single-use bags, as the best option. For products deemed essential, producers should be made to take more responsibility for the collection and environmentally friendly disposal of products; deposit return schemes were highly recommended.

Ultimately, this study provides hard evidence that should allow representatives to push for much-needed hard reform.