The Concept of Carbon Budgets

Just like any traditional budget, which aims to balance expenditure with income, a carbon budget is no different. In this case, however, ‘expenditure’ is carbon emissions and ‘income’ is a given level of global temperature rise. We are burning through our carbon allowance at an alarming pace, making it seem ever more unlikely for us to stay below the target temperatures of 1.5 or 2 °C.

Whilst other greenhouse gases, on a per molecule basis, have a greater heat-capturing potential, carbon dioxide is released in far greater volumes and thus has the largest effect on global temperatures. 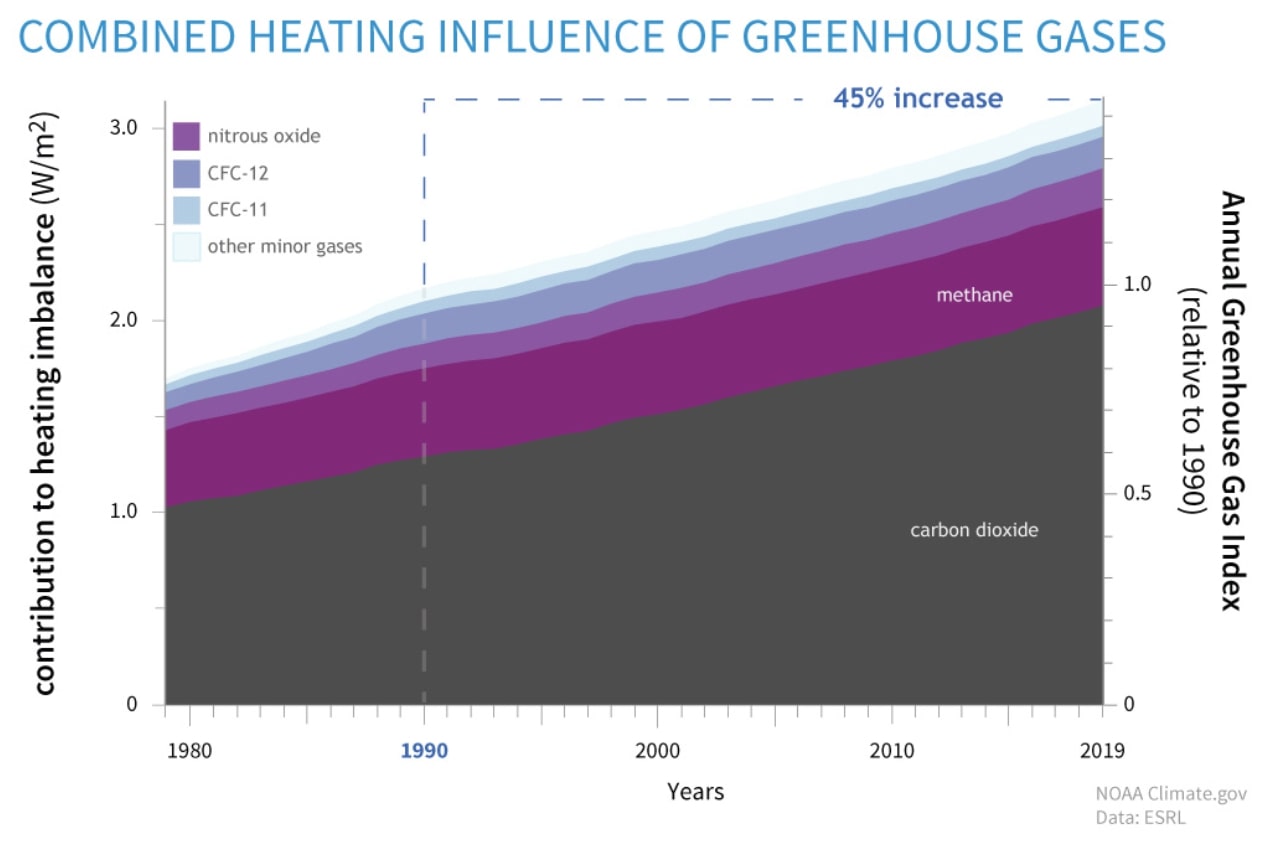 This is predominantly driven by anthropogenic emissions, that is to say human activity is responsible for the high atmospheric concentrations of carbon dioxide. Levels have now reached an 800,000 year high (likely to be 2 million year high) point of 409.8 parts per million in 2018. 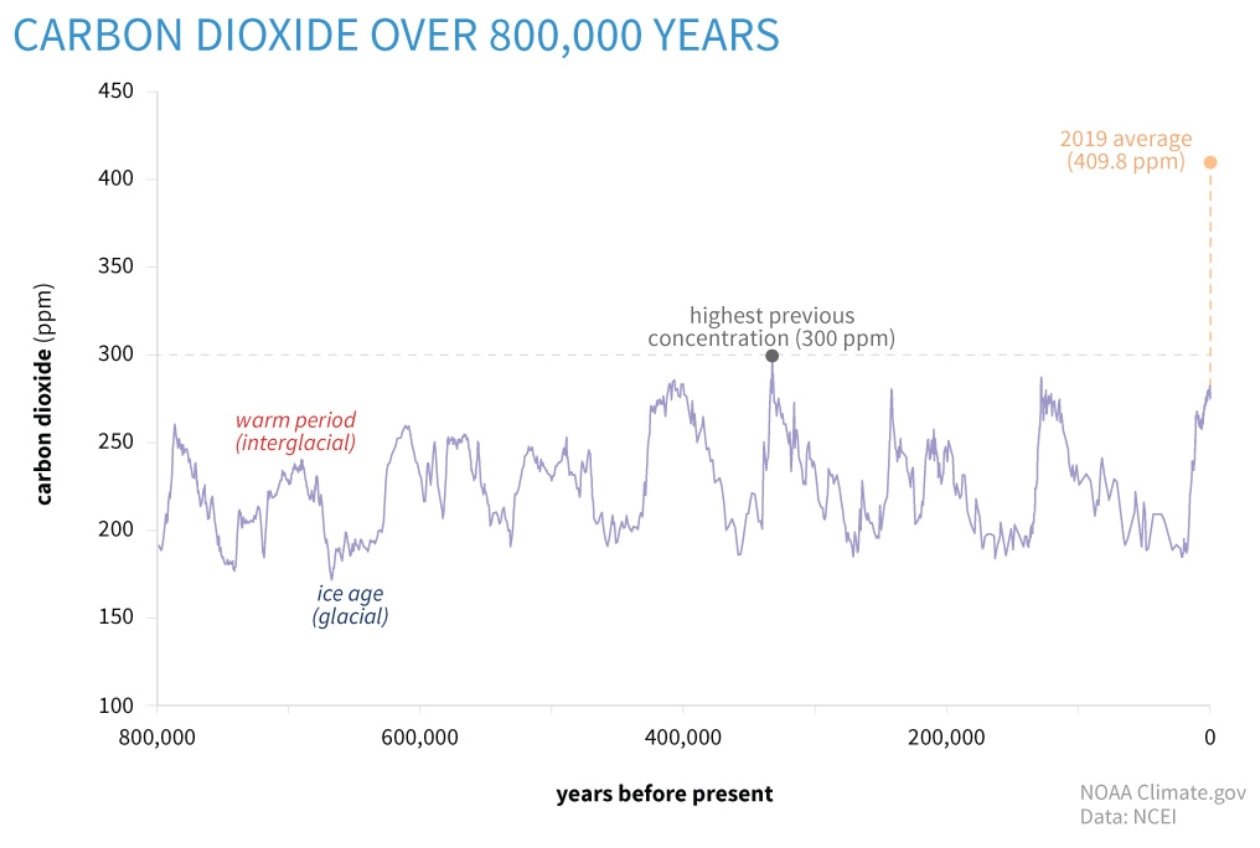 This is 46% higher than pre-industrial levels and highlights the alarming speed at which carbon dioxide has been released in a post-industrialised world, which is a relative 270 year blip in the Earth’s 4.5 billion years of life so far. 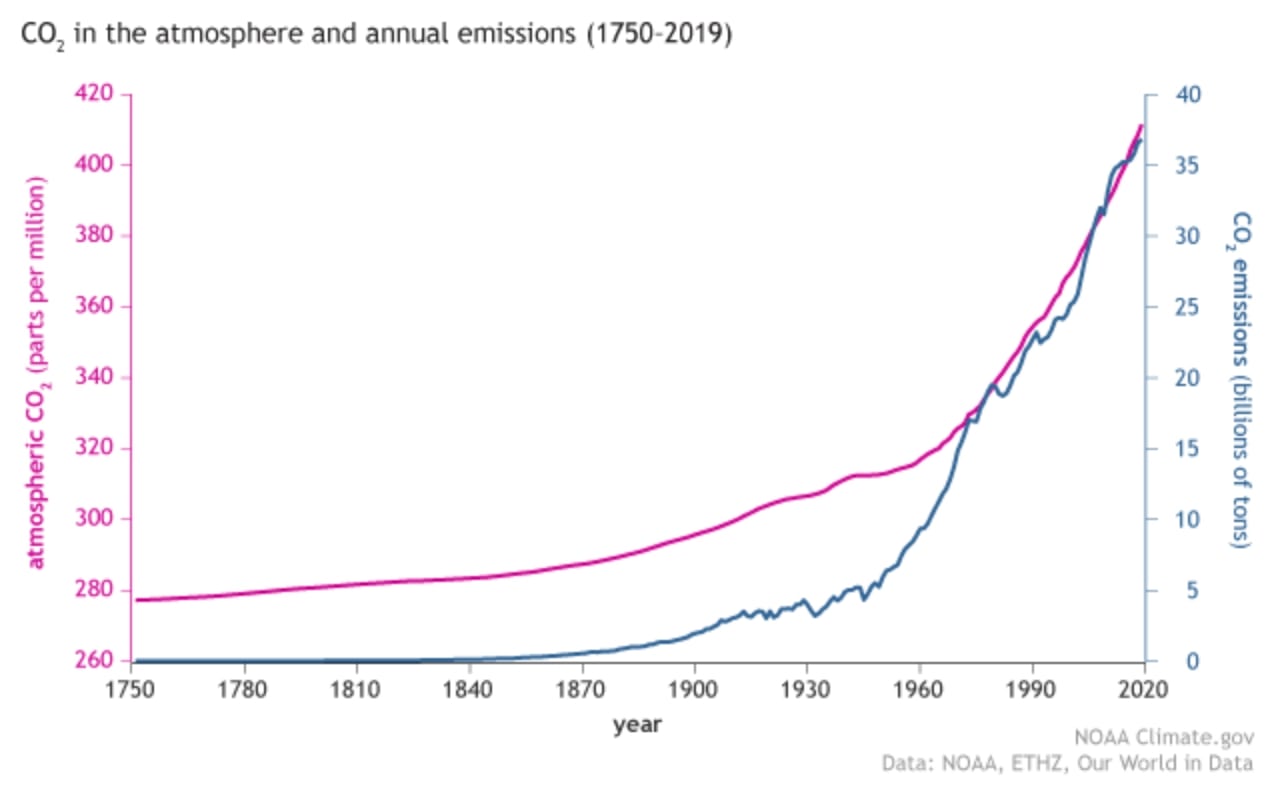 What is the carbon budget?

The carbon budget provides a simple number to express how much carbon we have left to emit before we exceed our desired global temperature increases. Going back to Paris in 2015, virtually all nations agreed that this desired level should be “well below 2 °C above pre-industrial levels” and all efforts should be made to limit it even further to 1.5 °C (Carbon Brief, 2018). The UN International Panel on Climate Change (IPPC, 2019) estimates that for at least a 66% chance of staying below 2 °C, total greenhouse gas emissions must be less than 1000 gigatons of carbon. This is limited further to 740 gigatons if we are to meet the 1.5 °C aspirational target. 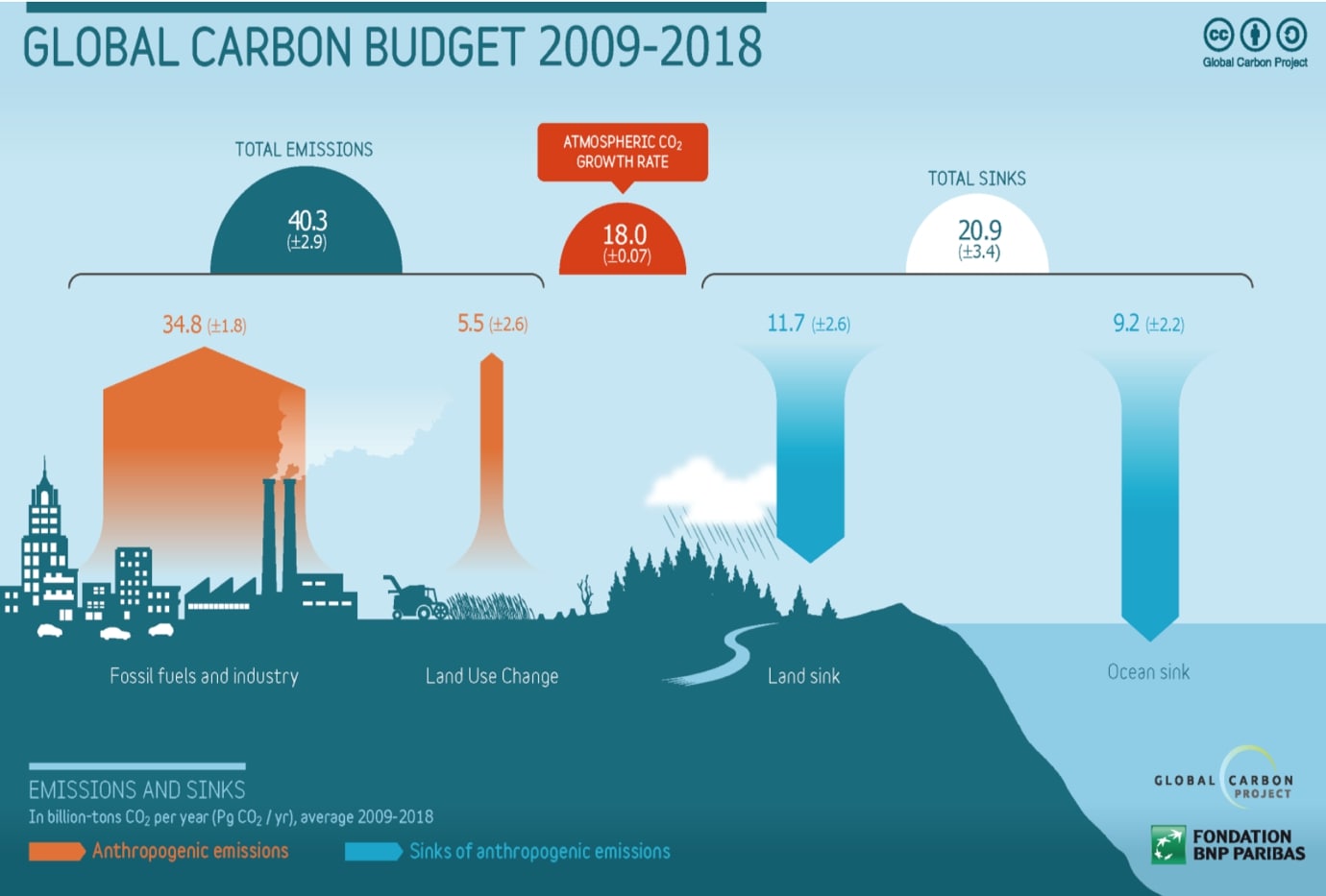 Where are we now?

Given the annual emission trends of the recent past, it is clear that a finite amount of carbon can be released until emissions need to be net zero. It has been estimated that by 2018 we had already spent 585 gigatons of the 1000 gigatons budget. A further 210 gigatons has been spent on the failure to reduce other greenhouse gas emissions and 75 gigatons can also be  attributed to the carbon cycle feedback, leaving just 130 gigatons remaining. This is further limited to just 55 gigatons if the 1.5 °C target is to be met with a 66% chance.

It is true that progress has been made in reducing carbon emissions, mainly as a result of a move away from coal burning for energy production. Despite this, the Carbon Tracker Initiative (2020) have calculated that if 2019 carbon dioxide emission levels are to persist, we have just 11.5 years left before emissions must be at net zero to meet the 1.5 °C target at a 50% probability.

You may have gleaned from the proceeding that there are many different ways of establishing the carbon budget. The parameters can clearly differ, and scientists need to establish answers to a number of questions. What global temperature rise are we aiming for? What probability of achievement is acceptable? How do we incorporate naturally and anthropogenic emissions? What is the timeframe? What may appear simple is now actually very complex and these variations have led to multiple carbon budget estimates, reached using a number of different methods. 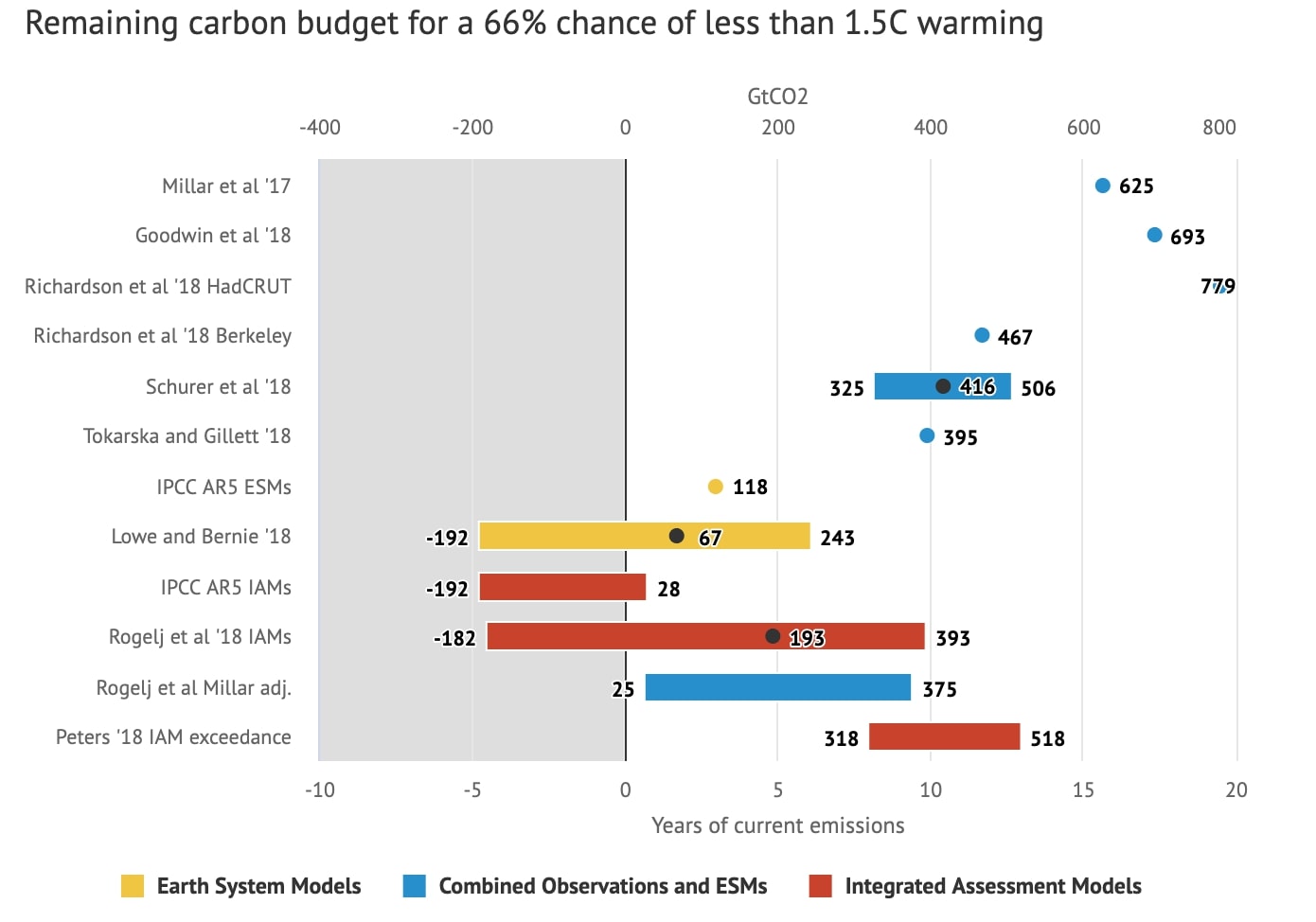 Although evidently a global issue, it is not one that has been created globally; certain nations are much larger carbon emitters. Who is responsible for the situation we now find ourselves in and who should take on the responsibility of fixing it? For example, China may now be the world’s largest emitter by volume, but on a per capita basis, the US continues to top the list. China may also point to the fact its growth in emissions is a relatively recent trend, versus the US and EU who have hundreds of years of pollution behind them. 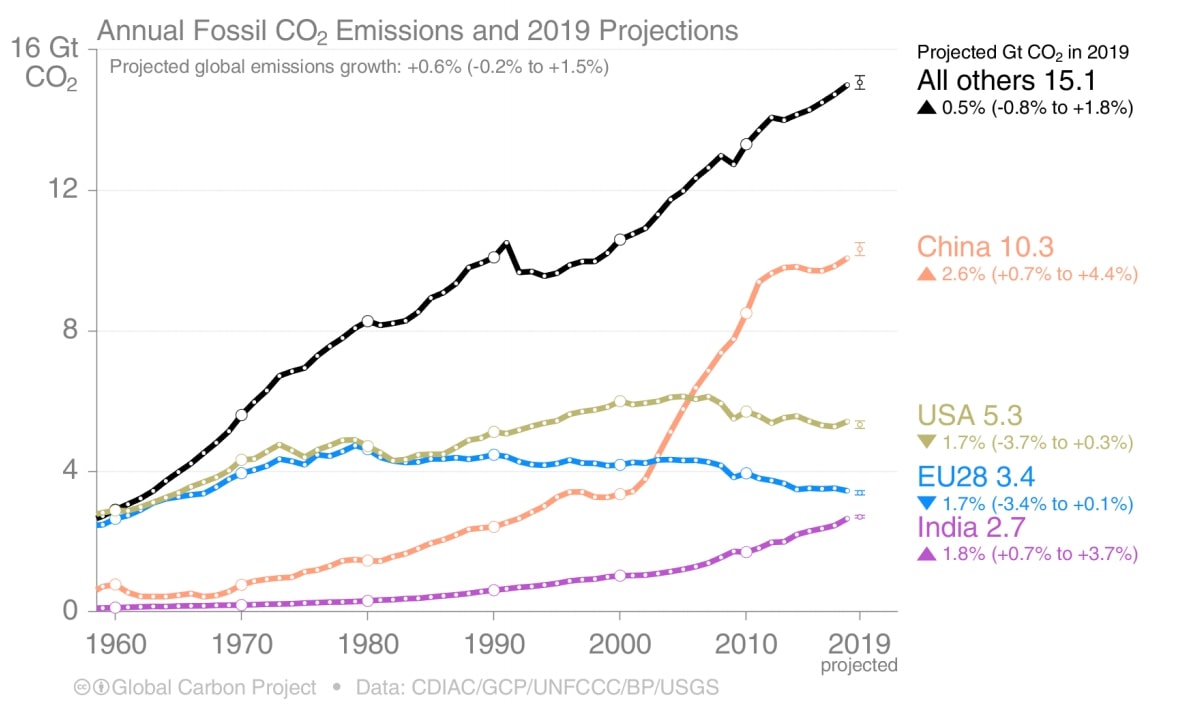 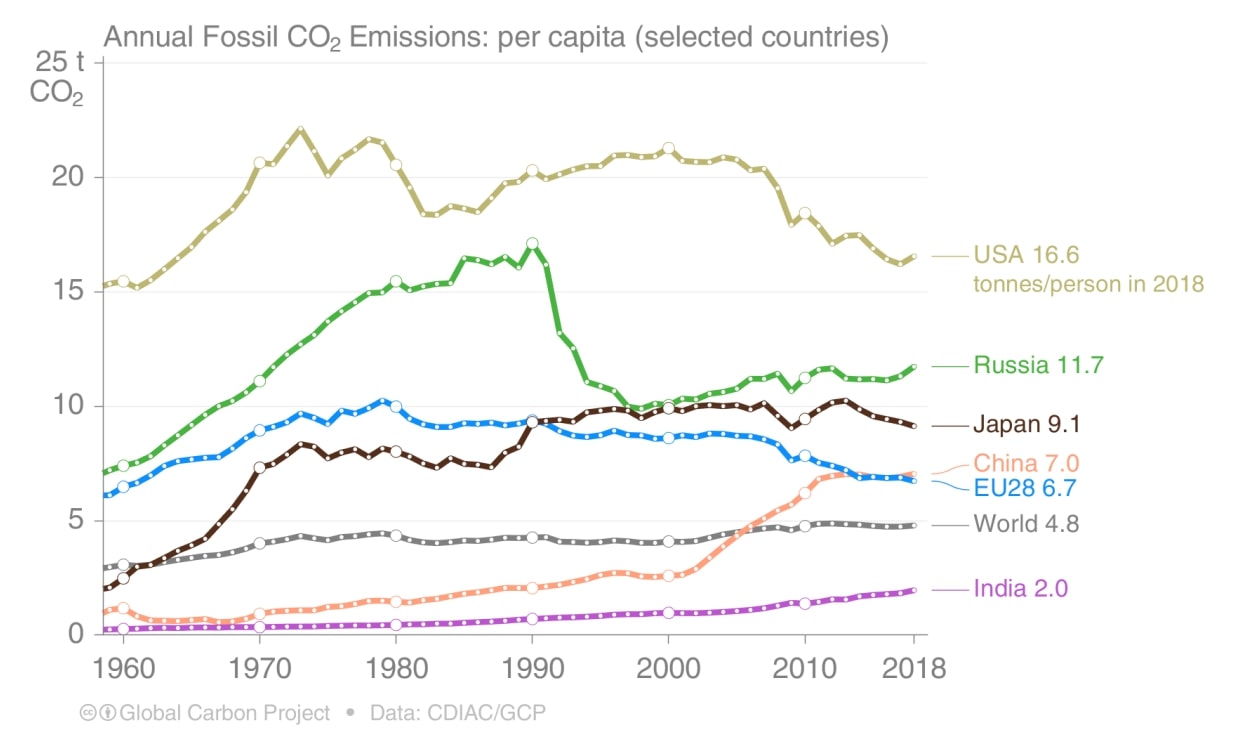 Carbon budgets were initially intended as a simple communication tool, designed to highlight the human impact on climate change. They have now morphed into analytical tools used by governments to frame their climate policies and emission reduction targets. Carbon budgets give us something to aim for, headline targets in numbers that are easy to understand. They do not, however, provide a solution to reaching that goal: an ambition that is quickly becoming unreachable.

This article was written by Sam Prestidge.