The Future of Canada’s Oil Sands

With the third-largest reserve in the world, the state of Alberta in Canada contains an estimated 173 billion barrels of accessible crude oil, buried under the boreal forest. Extraction and refinement is terribly damaging to the environment, yet the industry has grown sharply over the last two decades. As dropping oil prices put a dent in the fossil fuel market, we look at the future prospects of the oil sands industry.

What Are Oil Sands?

Oil sands refer to a type of unconventional petroleum deposit in viscous form (also called bitumen), mixed with sand, clay and water. It was formed millions of years ago from tiny marine organisms that were covered by layers of sediment with enough pressure and temperature to transform them into oil.

The indigenous Cree people first brought bitumen to fur traders in the 1700s, when it was used to waterproof canoes, and it wasn’t until 1967 that scientific advances and the need for fuel led to the opening of the Great Canadian Oil Sands project, now known as Suncor Oil.

Bitumen is particularly difficult to extract, and this depends on the depths of the deposit. Shallow deposits can be dug out of huge open pits, while deeper reserves are accessed by building deep shafts through which steam heats up the bitumen and is then pumped out. 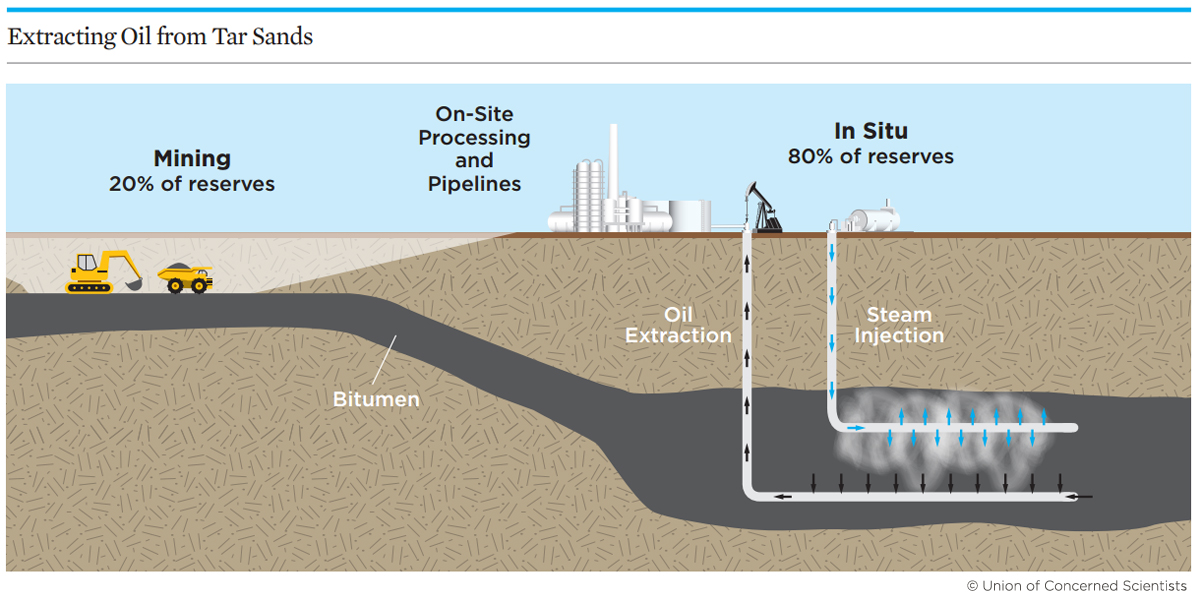 You may have guessed from the descriptions, but let’s spell out the environmental effects: as of today, over 700 000 hectares of forest have been cleared or degraded, 2 barrels of water are consumed for each barrel of oil produced, chemicals are dumped into artificial “tailings” ponds that can seep into groundwater reserves, and the oils sands industry accounted for 9.3% of Canada’s total greenhouse gas emissions in 2016-2017. 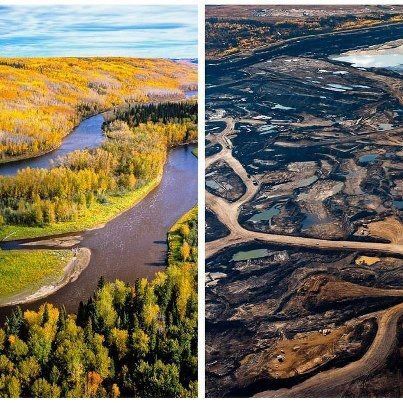 Athabasca, Canada before & after being exploited for the tar sands. Source: Linda Anne Brown, Pinterest.

Despite a strong stance against climate change, Canada’s oil sand operations have grown sharply in the last two decades.

We decided to help illustrate the expansion by looking at yearly satellite images of the oldest site, at Cold Lake. Built in 1985, it is still in operation today, and its infrastructure has grown from 17km2 to around 90km2 today.

The Future of Oil Sands

While investment and Canadian oil sand policy have continued to push for the industry’s development, the market has not been favorable. International crude oil prices collapsed in 2014-2016, and again in 2018-2020. Environmental movements have successfully demonized the sector, and one of its biggest stakeholders, France’s Total, recently bowed out claiming the product did not align with its new climate change position.

The Frontier mine project was meant to increase production by 5%, while clearing 24,000 acres of boreal forest and increasing carbon emissions. However, the developers withdrew, claiming there was “no constructive path forward”, claiming environmental concerns drove this decision. It was reported that the project may not have gone forward either way due to a lack of funds.

Well, despite the economic downturn, oil sands firms made billions last year, and they do not seem ready to give up. The industry has plans to replace classical fuels with “Blue hydrogen”, a product from natural gas where the carbon byproduct is captured and stored. Implementing decarbonizing solutions is admirable, but they are massively insufficient to make a significant impact, while their application demonstrates a desire to expand this sector.

Canada is aiming for net-zero by 2050, but there has been little progress in that direction so far. Seamus O’Regan, the natural resources minister, claims there is no way to achieve their target without Alberta’s Oil sands. Paradoxical? This is the challenge Trudeau’s government faces, as they attempt decarbonization in a country that is financially reliant on oil revenues, and thus on the future of oil sands.

Crashing oil prices and COVID-19 have given us an opportunity to break away from fossil fuel reliance. But defying all logic, and even the financial market, Canada and other countries seem unwilling to overcome their addiction.