The Sahara Could Gobble Up Its Neighbouring Countries

Nineteen of the twenty hottest years on record have occurred since 2001, not including 2020 which is on track to top the list. Research has found that mean annual temperatures above 29°C, currently found in 0.8% of the world, could affect up to one third of the world’s population by 2070. Mali is one of the Sahara-bordering countries that might become entirely too hot to live in.

The Republic of Mali is a landlocked country in northwestern Africa, home to nearly 20 million people, 67% of which are under 25 years old. Its northern borders reach deep into the Sahara, while the capital, Bamako, and most of its population is concentrated in its southern half. Agriculture is crucial to the country’s food security and economy, employing 75% of its citizens and 50% of its GDP.

High levels of poverty make the near entirety of Mali’s territory and people vulnerable to future climate change. Despite having a long history of coping with climate variability thanks to diversified agriculture products, their situation remains difficult today. A report by the USAID identifies the northern regions as being most vulnerable to the imminent vagaries of the climate, but these only contain 6% of the population. A more concerning study by Xu et al. (2020) predicts that the entire country could become as hot ass the Sahara by 2070 if we continue down our current path. 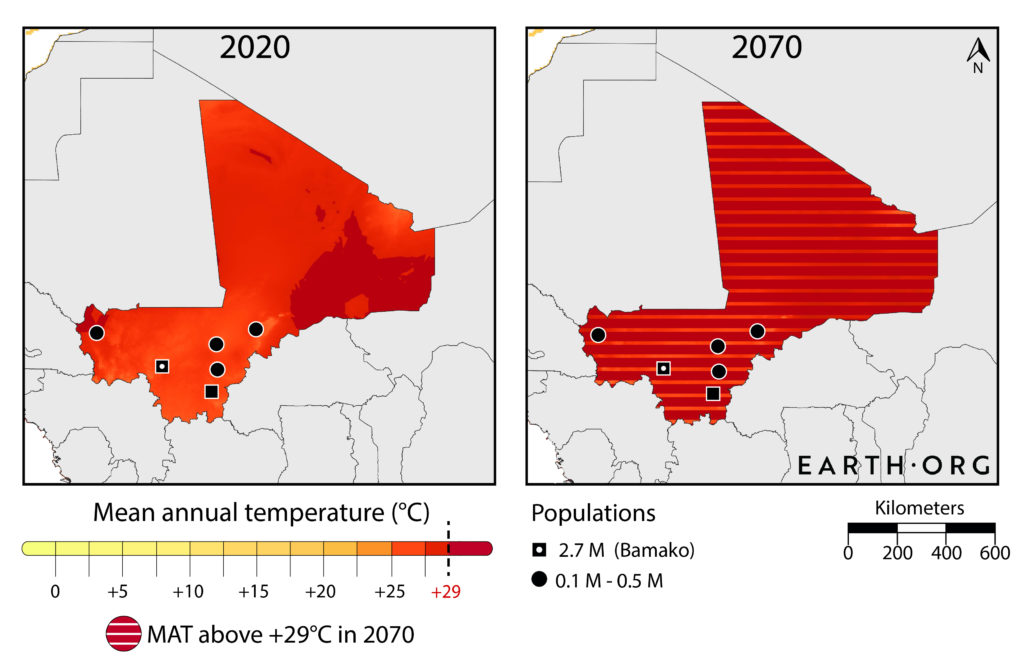 The entirety of Mali is projected to have mean annual temperatures above 29°C, found only in the hottest parts of the Sahara and Saudi Arabia today.

The Sahara-fringing climate of northern Mali explains why only a small segment of the population lives in it. We see above that the entire country, including its wetter southern region, will become as hot as the heart of the desert.

These temperatures are barely tolerable by humans, and the only realistic way to adapt is to emulate the Saudi Arabian approach of remaining in air conditioned spaces throughout the hot months. Today, Mali is too underdeveloped to provide such respite. In 50 years, this may no longer be the case, but Mali’s reliance on its agriculture will surely be key to its development. If its farmland cannot cope, then neither can the people. In all likelihood, the only option will be relocation.

This is the sad reality of climate change – billions will see their homelands become entirely inhospitable, and we may see the biggest mass displacements in history. We have time yet to steer away from this course, but the time is now.